Gaming laptop competition nowadays is fierce with brands consistently releasing new models with new features while also launching refreshed variants based on the previous generations. Lenovo’s Legion Y740 falls into the latest iteration of the company’s popular gaming series. Previously, I made my initial impressions a week ago, and so far, this device left me with a good mark, especially when it comes to its design. Today, after taking the Y740 for a full spin, I can finally say my final verdict on this gaming beast. Spoiler alert, it is indeed one heck of a good performer. Check it out! 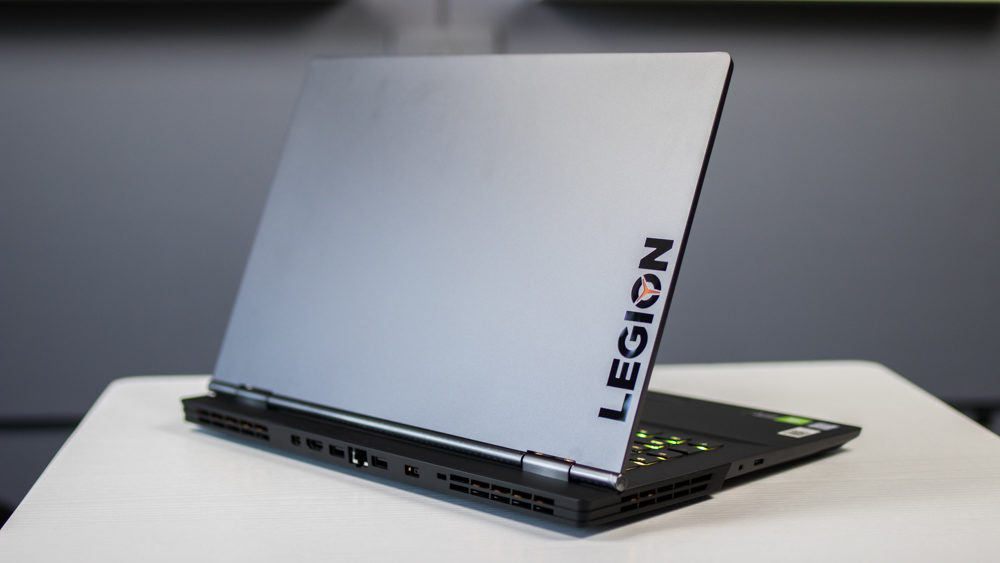 I’ve reviewed many laptops before, and so far, the Legion Y740 gives the most refreshing look among all of them. Usually, the designs that I see in gaming laptops immediately gives away the impression of “gaming” due to the striking Red color surrounding the device. Lenovo’s creation, however, looks subtle and any non-techie person would easily mistake this as a regular laptop if not for the “Legion” branding. 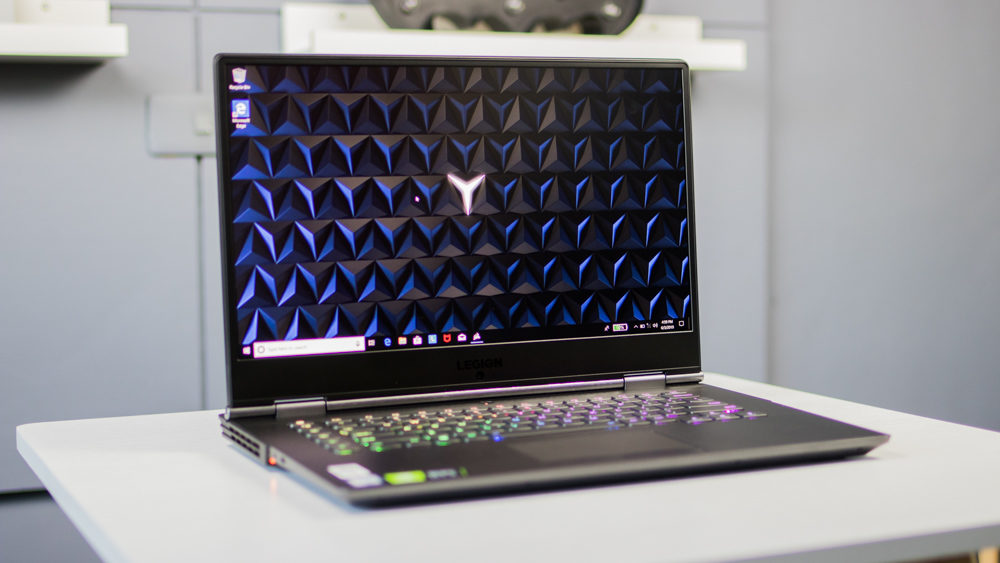 The gunmetal aluminum design gives a stealthy, but, premium look, which is a plus. The Legion logo located at the right side attracts the eye thanks to the “Y”-shaped letter inside the letter O which, by the way, has RGB lighting when you boot up the device. 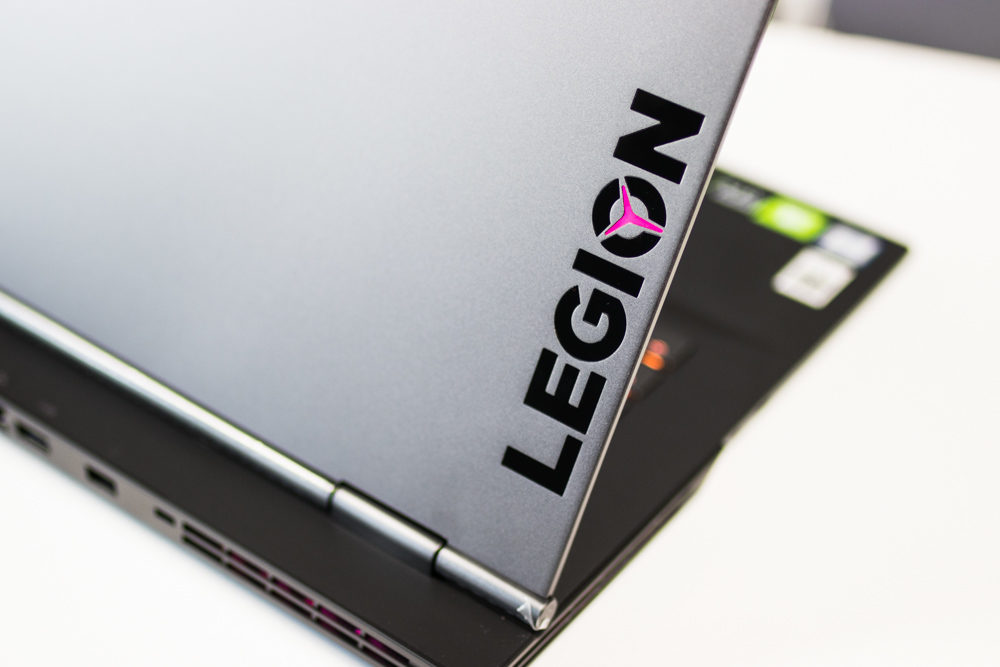 On the left are the 3.5mm audio port, Thunderbolt 3 Type-C port, another exhaust vent with RGB lighting, and another loudspeaker. It’s nice to see that both sides have two vents that will help dissipate the heat without any hindrance.

Moving to the right, you’ll see a USB 3.1 Gen 2 port and an exhaust vent that has its RGB lighting. At the leftmost side, you’ll see the side-mounted loudspeaker. It never ceases to amaze me that Lenovo came up with the idea of putting RGB lights even in the vents, making it very aesthetically pleasing. 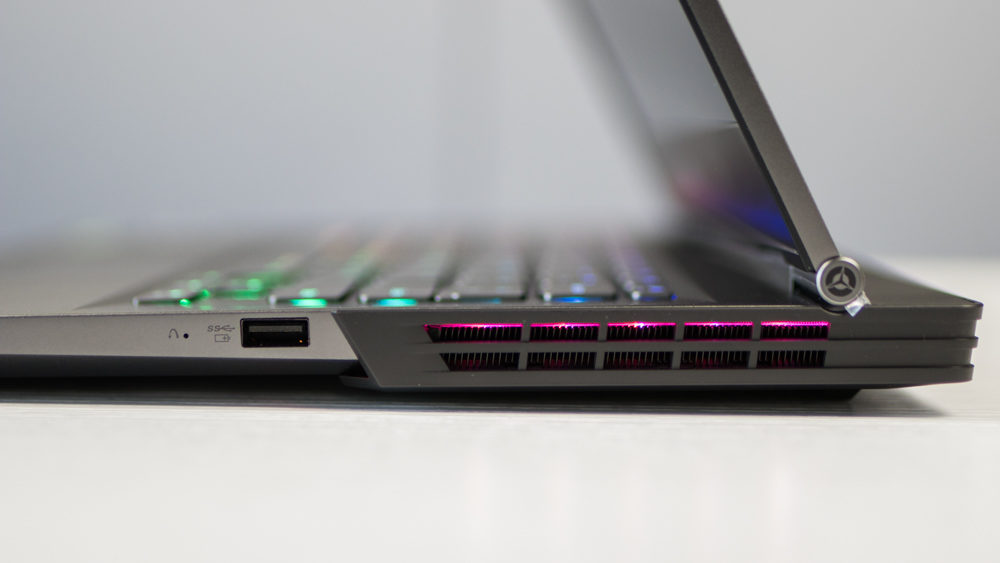 At the back are two more exhaust vents with RGB which are always good to see. Other ports include the Mini Display Port, HDMI, RJ-45, two USB 3.1 Gen 1 ports, AC adapter, and the Kensington lock. So far, I love how Lenovo made the design of the Y740 in favor of putting more exhaust vents. It’s also refreshing to see that all of them have RGB lighting, which entices people’s eyes further. 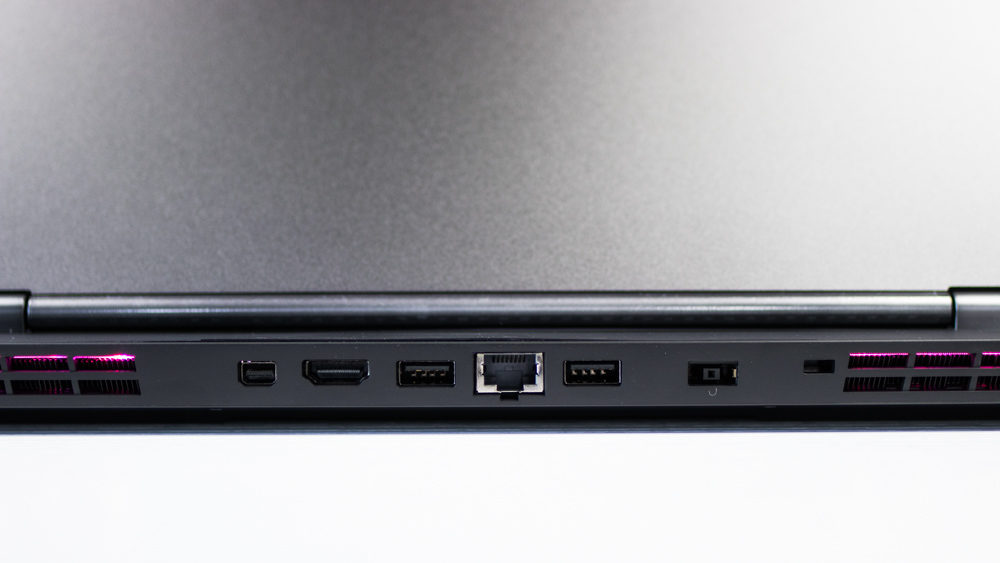 The body is made up of a matte metallic finish which blends well really nicely to its gunmetal-colored lid. Speaking of which, opening the lid is easy, indicating that Lenovo made it a point to strengthen the hinges, which is excellent. I tried flexing out the 15.6-inch screen and so far so good. There’s a little wobbling action here which means that it is sturdy and well-built. I like how the top and side bezels are slim; it’s just the right measurement for me. One thing I noticed, however, is that the webcam is located at the thick bottom bezel which would look awkward when you try to open the camera app in the laptop. Camera placements like this are what we usually call “Chincams” because our chins will always be the first thing that will be centered here. This is just almost trivial, though, as people who would buy this will most likely focus on its gaming capabilities. 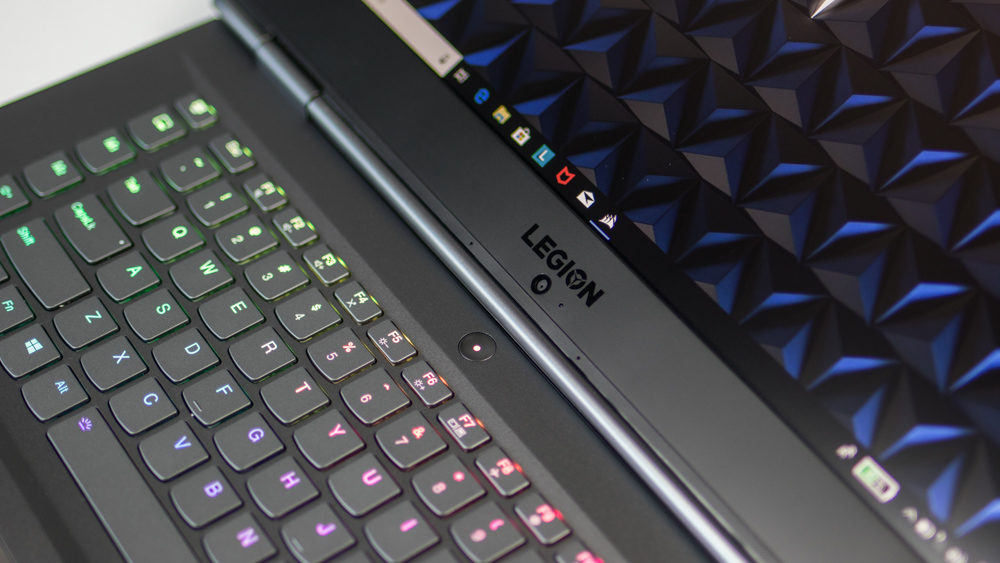 The Y740 has an unusual keyboard setup as the numpad is non-existent given its 15.6-inch size, however, there are additional keys located to the left of the standard 60% keyboard configuration (including the arrow buttons). At the top, the first four buttons are meant to configure the two Macro keys (M1 and M2) while the last two adjusts the brightness of the RGB lighting of the whole keyboard.

Moving to the individual keys, all of them are clicky and tactile, so I enjoyed typing here. My only gripe with this is that I always have to adjust my hands as I’m not used to a keyboard setup that is leaning more to the right part. I feel distracted when typing due to the extra buttons at the left, which doesn’t serve me any purpose at all.

As for the trackpad, it is smooth when I ran my fingers across it; however, there’s some resistance, which is fine. I feel like this is a bit nitpicky, but, the physical left and right mouse buttons below gives less navigating space for people. I would have appreciated it more if they made it a click pad (integrated left and mouse buttons in the trackpad) instead. 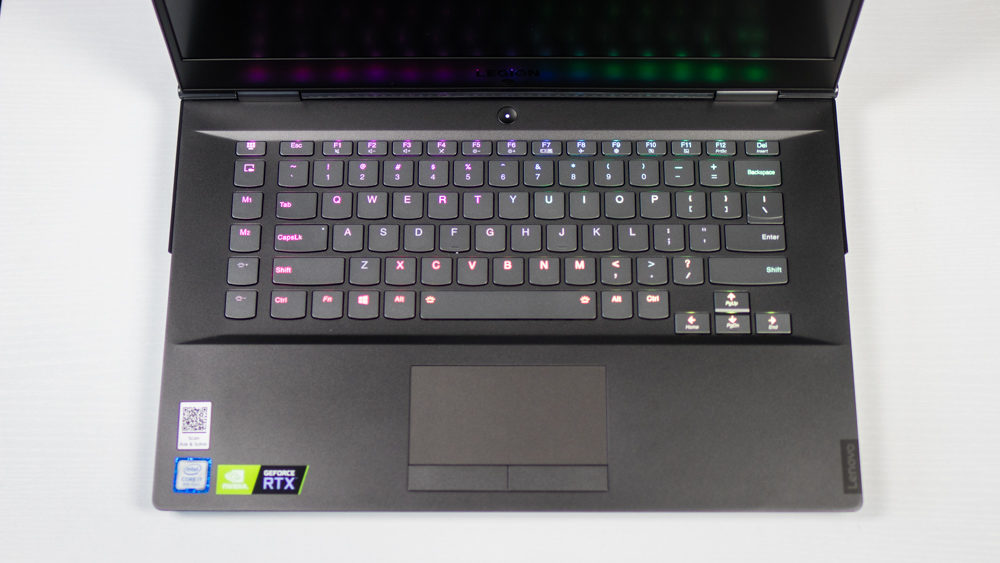 I like how the Y740’s screen can tilt up to a 180-degree angle. Typically, you’ll only see gaming laptops that can bend at a lesser angle than that so props to you, Lenovo. 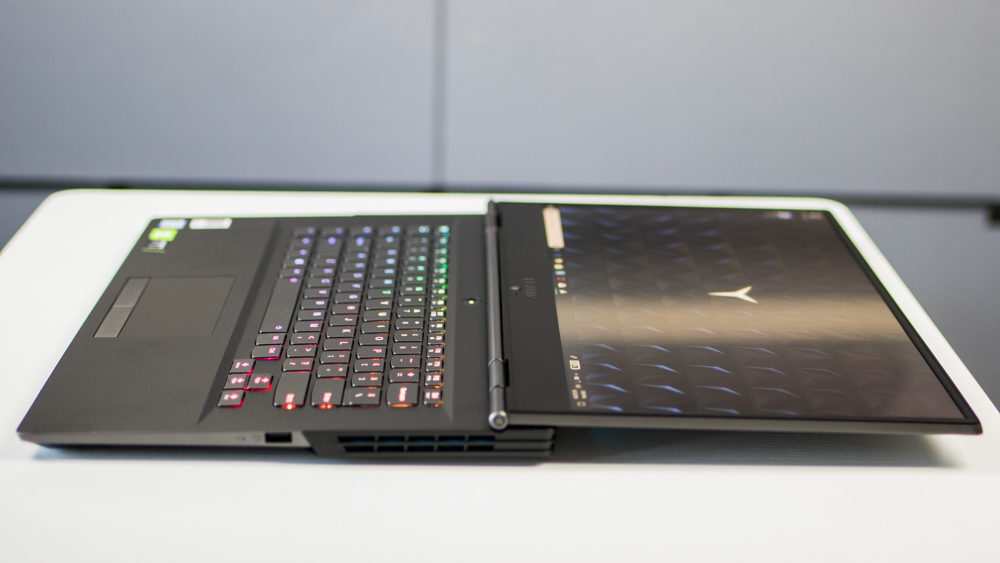 Carrying this gaming laptop isn’t much of a hassle for me as compared to other review units that I had before. The Y740 feels thin while I do admit that it has a weight that makes my arms stiff after some time of holding it. Regardless, Lenovo did a great job when it comes to the design and construction department.

The Legion Y740 comes with a Full HD screen that comes with a whopping 144Hz refresh rate. The display is sharp while the color accuracy is okay, however, maybe it’s just me, but the overall look is leaning to the warm side. Regardless, though, I enjoyed playing on this device, primarily first-person shooter (FPS) games such as Tom Clancy’s Rainbow Six Siege, Apex Legends, and Counter-Strike: Global Offensive. I’m used to 60Hz, so experiencing a higher refresh rate display, it feels like I’m reborn as everything looks and feels smooth as a baby’s butt cheek. 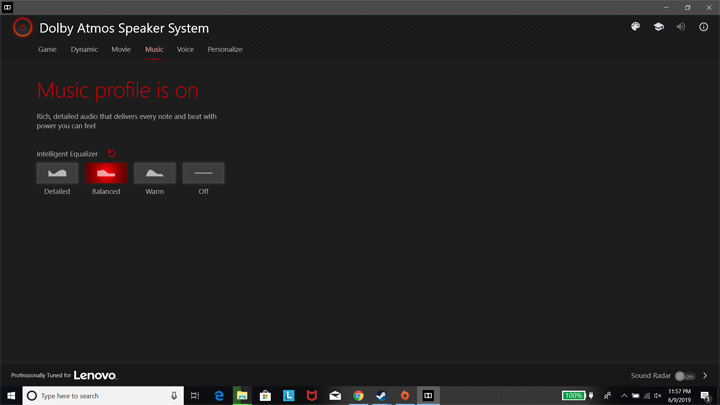 As for audio, its two speakers located on both sides comes with Dolby Atmos technology and so, sound quality is excellent and well-balanced. The highs, mids, and even lows can are audible while at max volume; I don’t hear any distortions. Instead, the surround sound feeling improves my overall experience.

The Legion Y740 runs on a Windows 10 Home operating system — 64-bit of course, while it has built-in Lenovo apps such as Lenovo Vantage which is the gaming laptop’s dashboard where you can check and modify the status of your device. Through this app, you can customize the two macro keys, as well as adjusting settings and configurations to your liking. 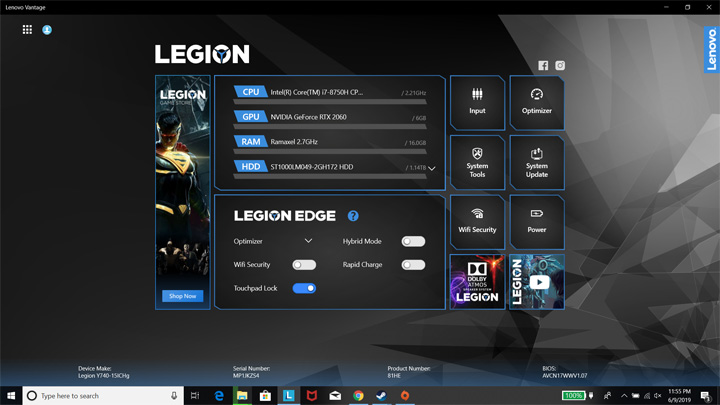 If ASUS ROG has an Armoury Crate where you can adjust the RGB lighting of your keyboard, Lenovo has the iCUE application where you can do that as well. It also has a built-in McAfee LiveSafe Anti-virus program and the Dolby Atmos Speaker system app to adjust the sounds. 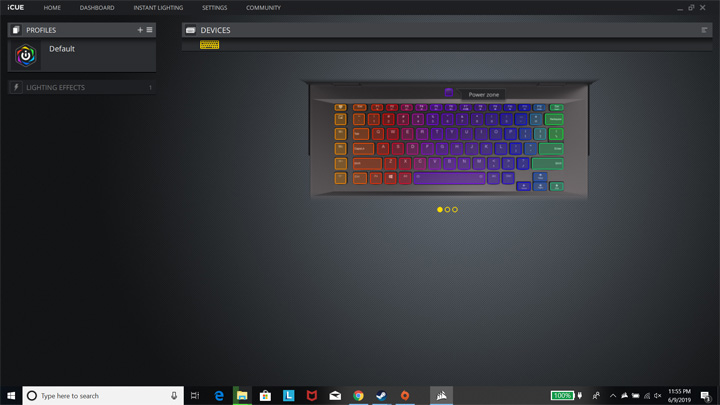 This variant of the Y740 comes with a 1TB hard disk drive and a 256GB solid-state drive which is excellent given that the whole OS is installed on this drive. If you’re curious on how fast its SSD can read and write files, here is its benchmark score: 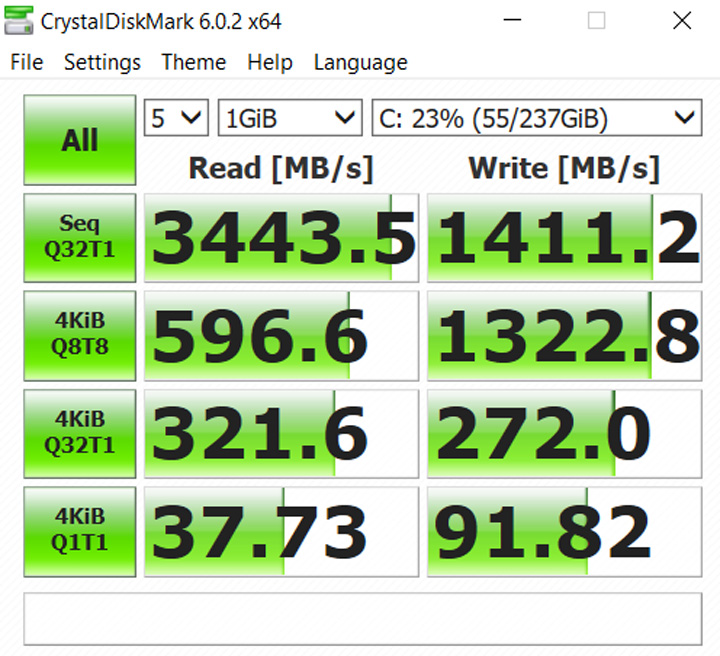 Powering the Y740 is an Intel Core i7-8750H processor, 16GB worth of RAM, and an NVIDIA RTX 2060 (6GB) graphics. On paper, this kind of setup already shows that this gaming laptop is a beast. It can smoothly run any AAA game titles, render videos, edit photos, and even multitasking. Running synthetic benchmark tests and even gaming benchmarks yielded the following results: 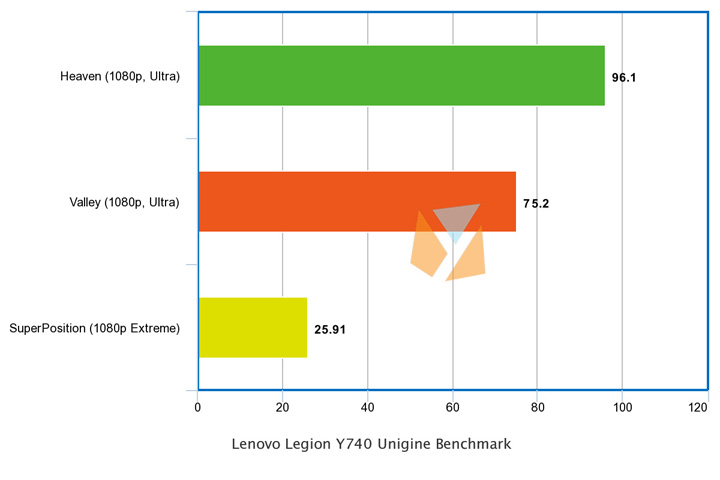 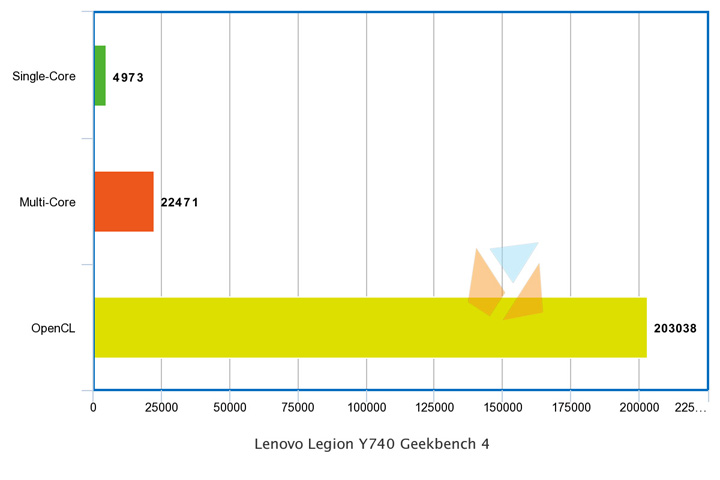 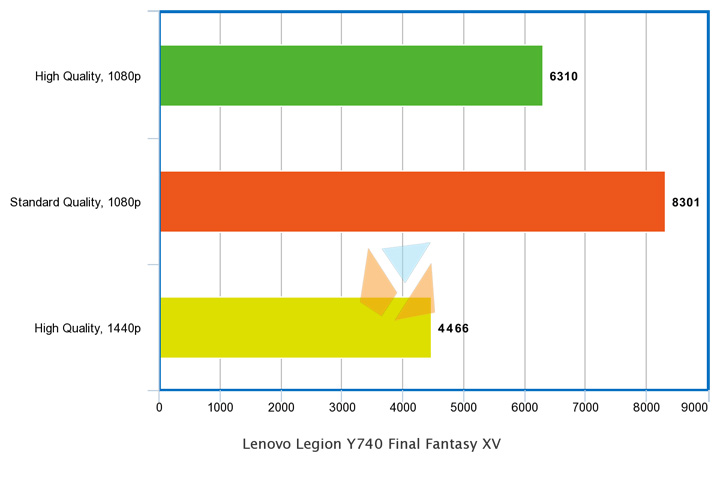 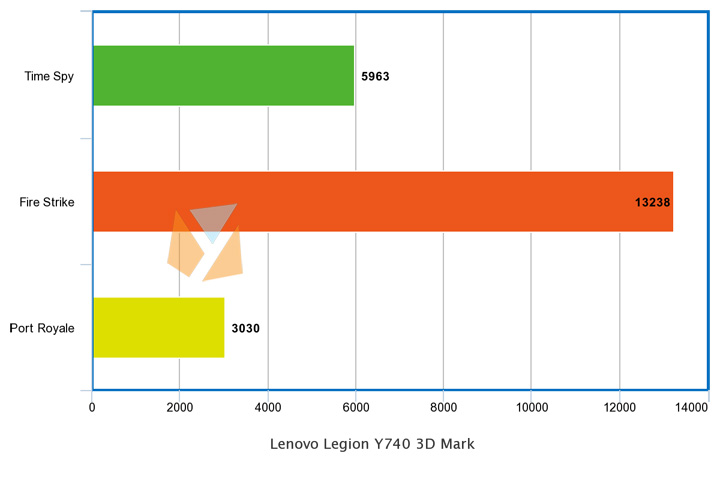 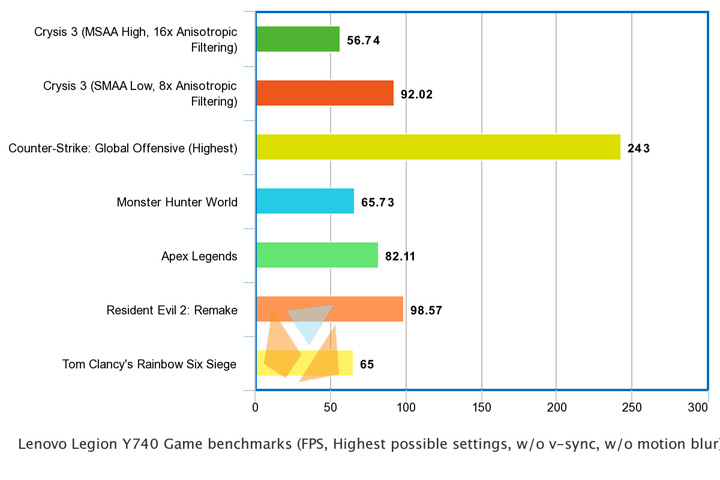 Overall, I wasn’t disappointed with how well it performed. Even games that demand heavy graphics like Crysis 3 at the highest possible setting can run almost at 60 fps, which is very impressive already. Also, if you’re an FPS lover like me, worry not because with the combined 144Hz refresh rate and the above 60fps yielded in the benchmark scores, only your skills will be the reason why you will lose — of course there’s the factor of a bad internet connection and teammates, but you know what I mean.

Despite the Legion Y740’s visible prowess in terms of the aspects mentioned above, a gaming laptop’s weakness is its battery life. When tested in our video loop test (1080p movie, 50% brightness, 50% sound, Airplane mode, w/ earphones), it only lasted for 2 Hours and 30 Minutes which is not good. The culprit of this is most likely the RGB lighting on the keyboard, the vents, and on the logo. There’s too much power consumption happening on this gaming laptop, which is terrible if you are fond of traveling. You’ll also find yourself carrying an unusually long and wide, but slim, charger. The size is due to its NVIDIA RTX 2060 graphics — in case you’re wondering. 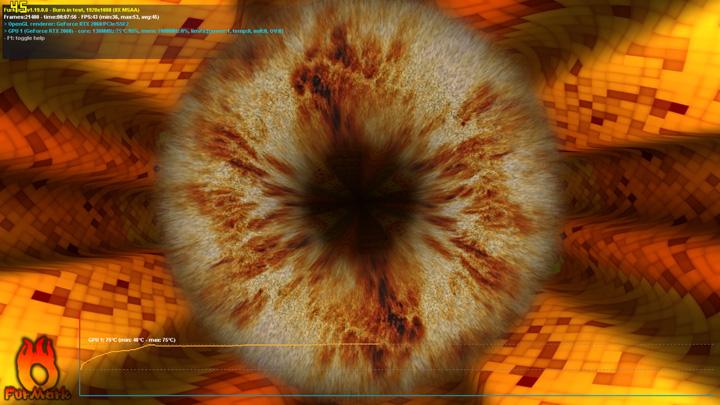 As for thermals, running both Prime 95 and Furmark thermal benchmarking tests showed that the Y740 has a pretty cool heat dissipation system. The CPU which is the i7-8750H reached a maximum of 87°C while the GPU which is relatively hot already, but at least it didn’t reach 90°C. The RTX 2060, on the other hand, kept its cool at about 75°C, which means that the four exhaust vents with RGB lighting are not just gimmicks.

One thing I noticed is that even when you’re not really playing, or you just left it on standby, heat builds up at the bottom part of the laptop, so I don’t advise you to mount it on your laps. The fans are also loud especially when you’re playing a resource-heavy game, and you feel like there’s a mini airplane readying for take-off at any moment — yes, that’s how loud it is.

The Lenovo Legion Y740 is, without a doubt, a great gaming laptop. Not only does it deliver above-average performance, but it also has a stylish design that people would like to see. Aside from that, it has a 144Hz display, excellent audio quality, four exhaust vents, and it has an overall premium build. Its disadvantages, like the short battery life, are quite negligible at this point given that this is a gaming laptop after all.

For PHP 119,995, the Y740 is slightly less expensive than the ASUS ROG Scar II, which is a great gaming laptop as well, but I prefer this design more than the other given that they both have unique RGB lighting placements. Other than that, I would recommend either of these gaming beasts if you’re looking for a laptop that will last you for a long time. 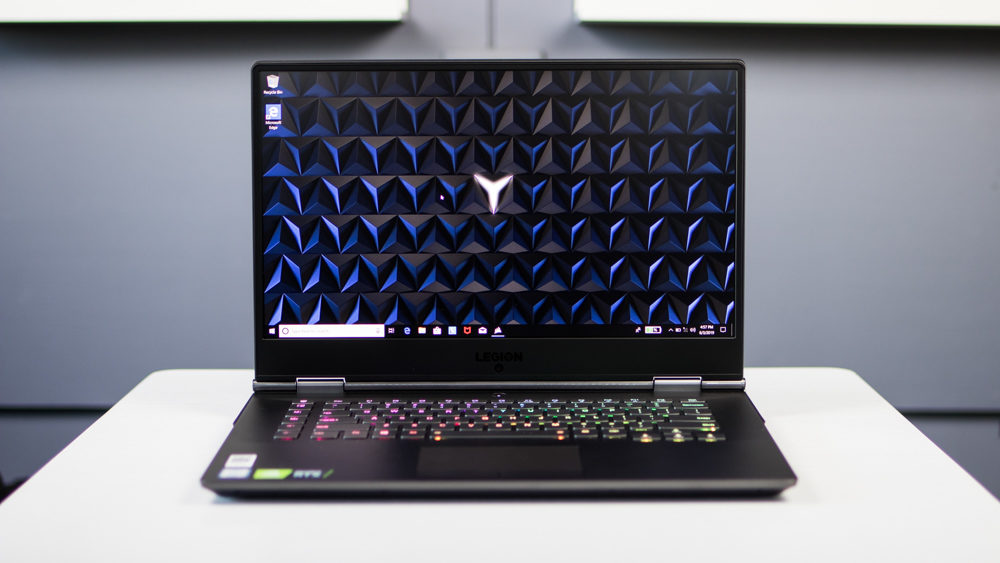