ASUS ROG gave mobile gamers a new device to desire with the release of the ROG Phone 5. Compared to its predecessor, it has a cooler design, a bigger and tougher screen, a more powerful chipset, and even faster charging. Is this the flagship to get this year? Should I upgrade from the ROG Phone 3? Let’s find out. 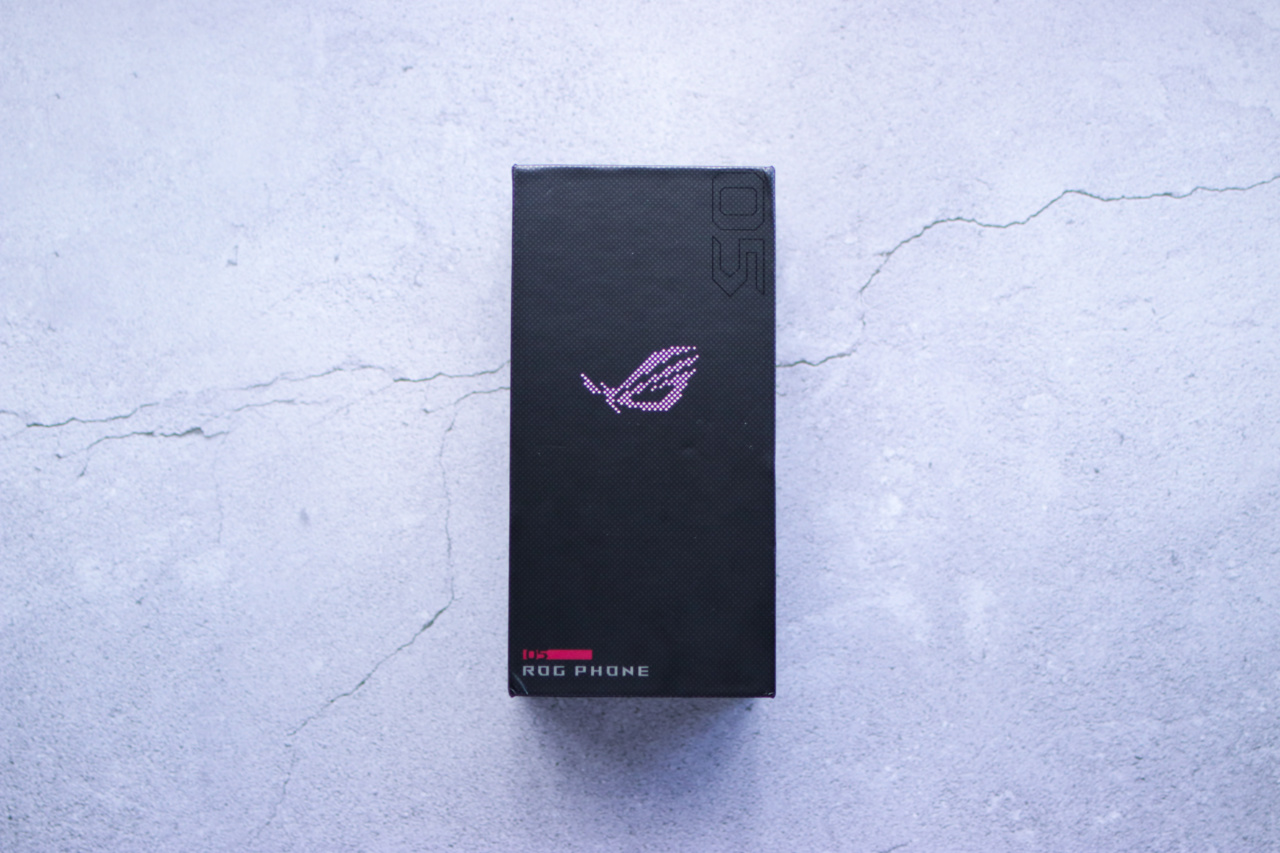 One of the main goals of a gaming smartphone is to provide users a “gaming” experience that is not usually found in a typical flagship smartphone. ASUS ROG took it up a notch with the ROG Phone 5 as even the package itself is offering something extra for those unboxing it for the first time. 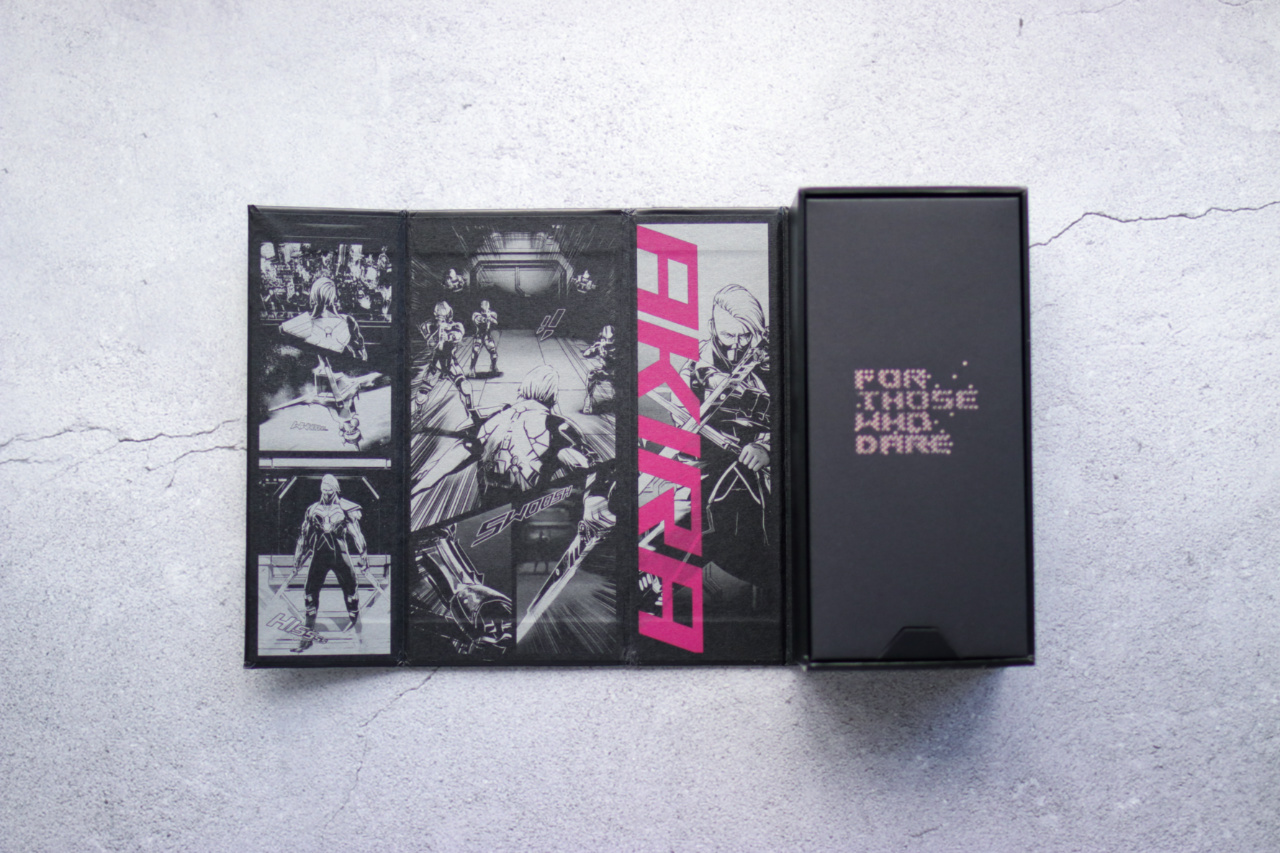 A short comic strip lines the inside of the package. By itself, it’s already a nice touch, but they actually trigger AR animations to welcome you to your new device. See it in action in our unboxing video below:

The box contains the ROG Phone 5 unit, the protective case, 65W charger, braided USB-C cable, a fancy SIM tray ejector pin, and some stickers. The Aero ActiveCooler 5 is placed in a separate package. 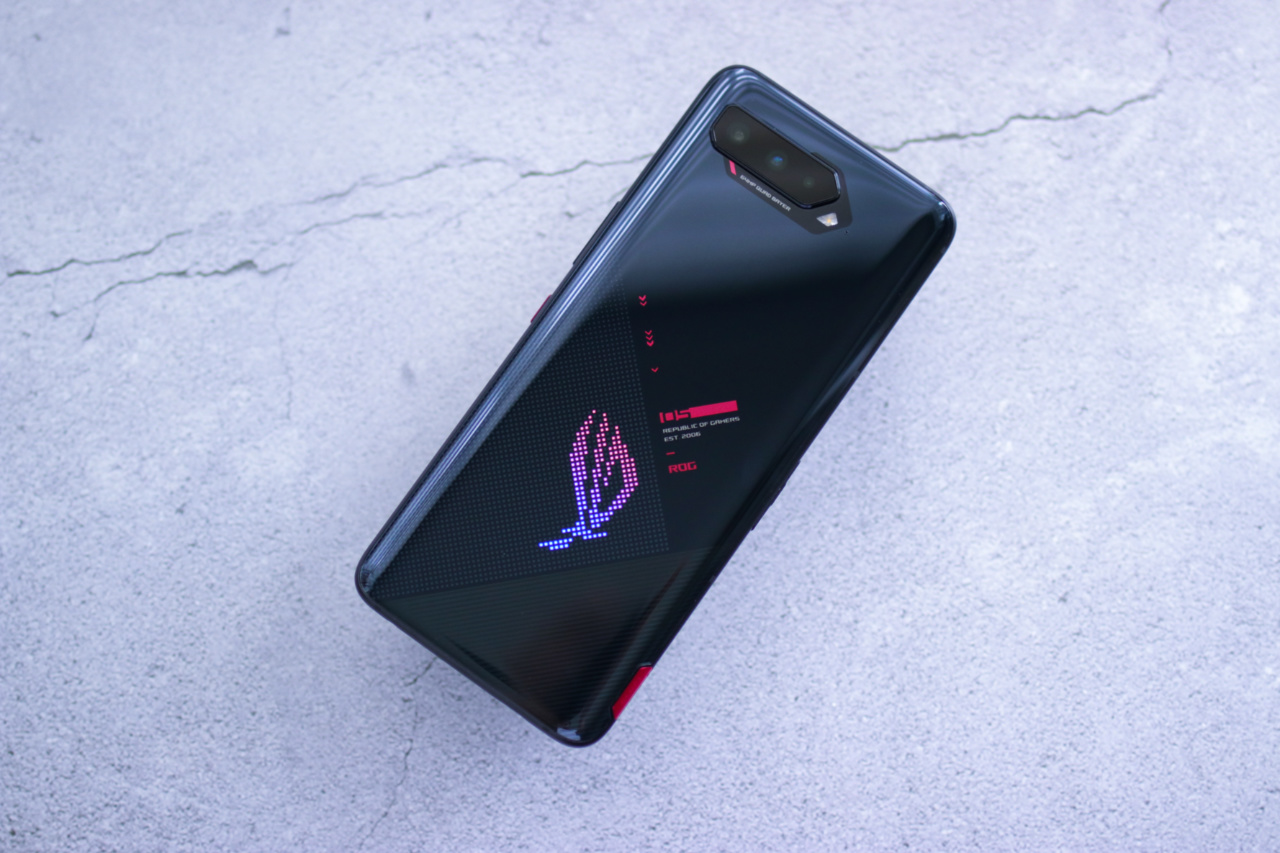 The ROG Phone 5 comes in two colors — Phantom Black and Storm White. Given the screen size, it’s a pretty tall device at 172.8mm and chunky at 10.3mm. It’s relatively narrow, though, at 77.3mm with curved back edges, so you’ll still be able to grip it properly. It’s hefty at 238g, which is understandable given the materials and battery size. 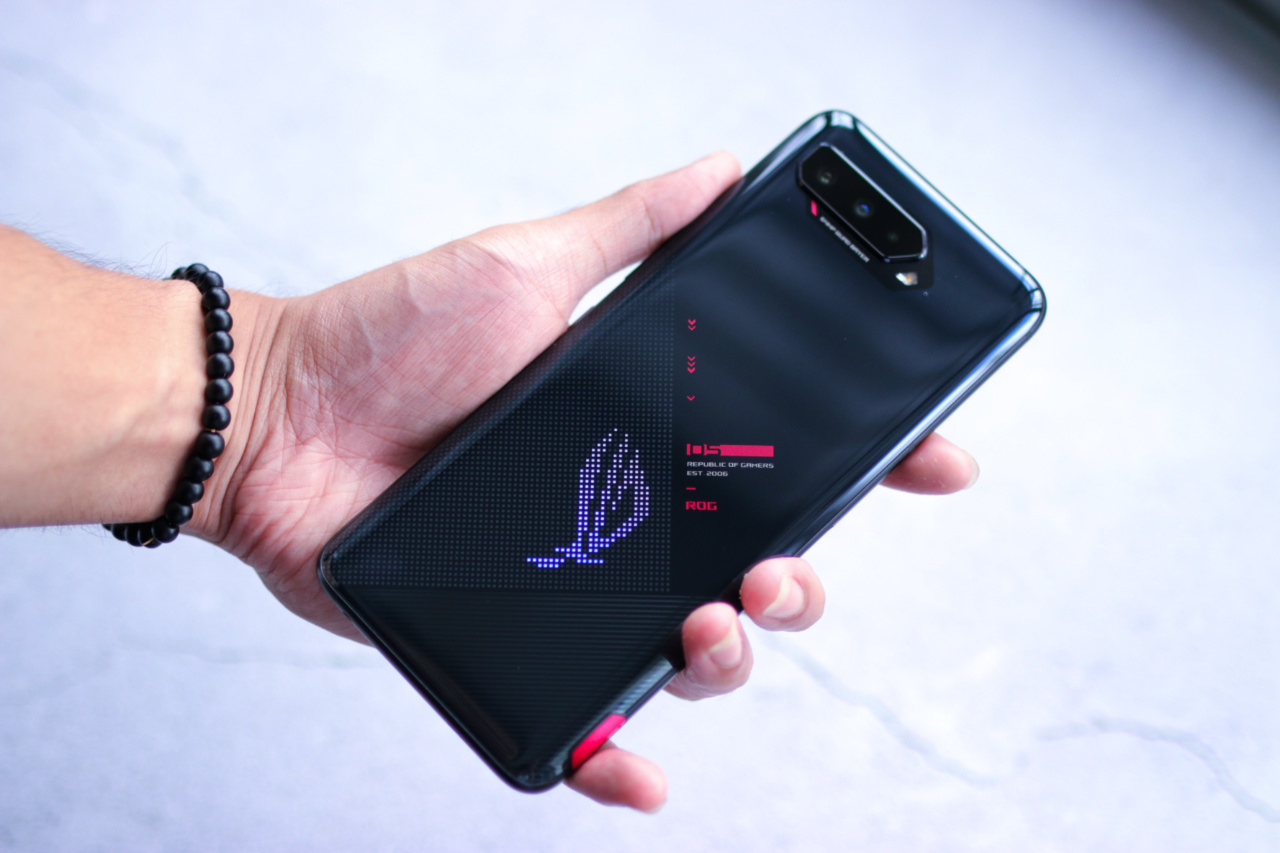 As expected, it’s a premium device, clad in Gorilla Glass Victus on the front, Gorilla Glass 3 at the back, and a metal frame. Even though these are tough materials, glass can still break or shatter, while metal can still be nicked or scuffed if you drop it from a significant height, so make sure to use the case included in the package. 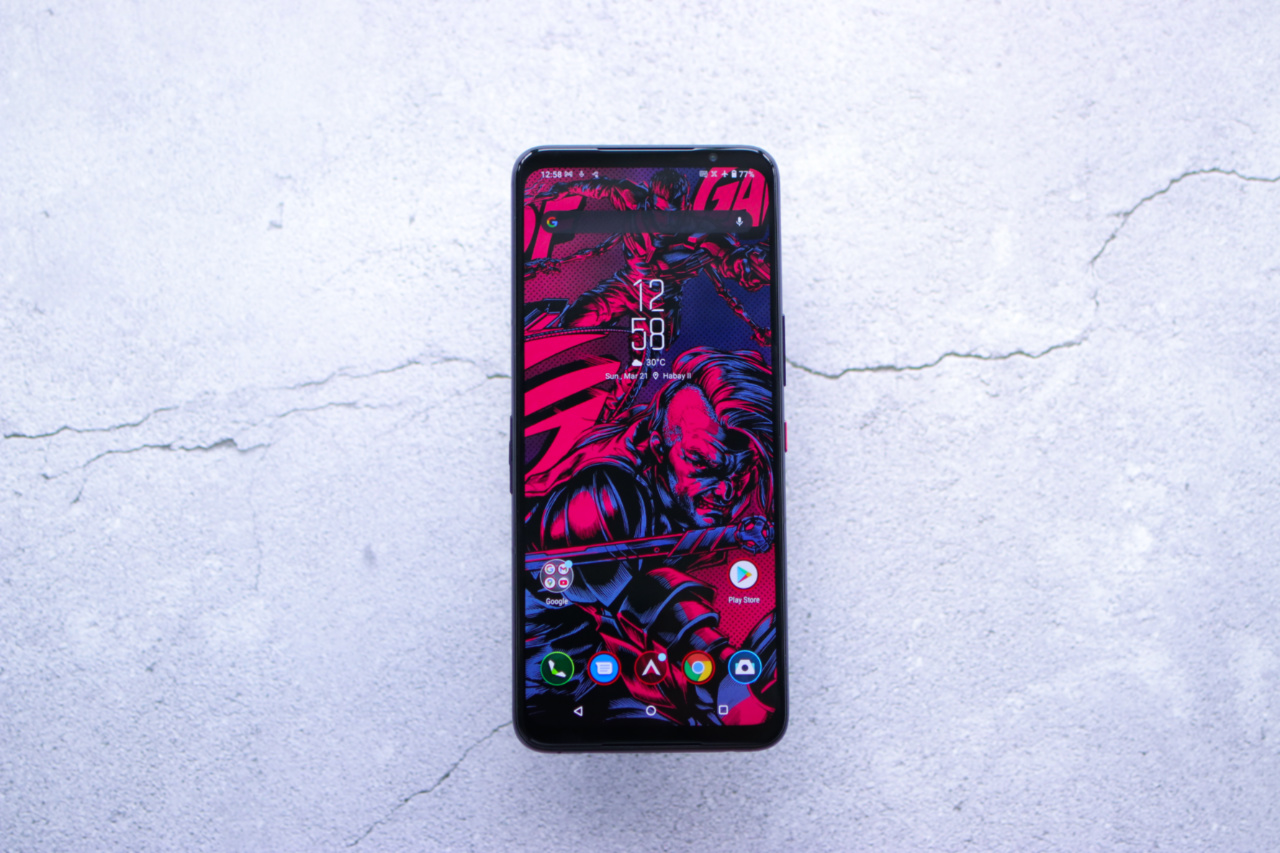 The 6.78-inch FHD+ AMOLED screen dominates the front of the device. Above it is the 24MP selfie camera and LED indicator. There are noticeable bezels at the top and bottom but thin enough to provide an immersive 82% screen-to-body ratio. For audio, we have stereo speakers at the top and bottom. 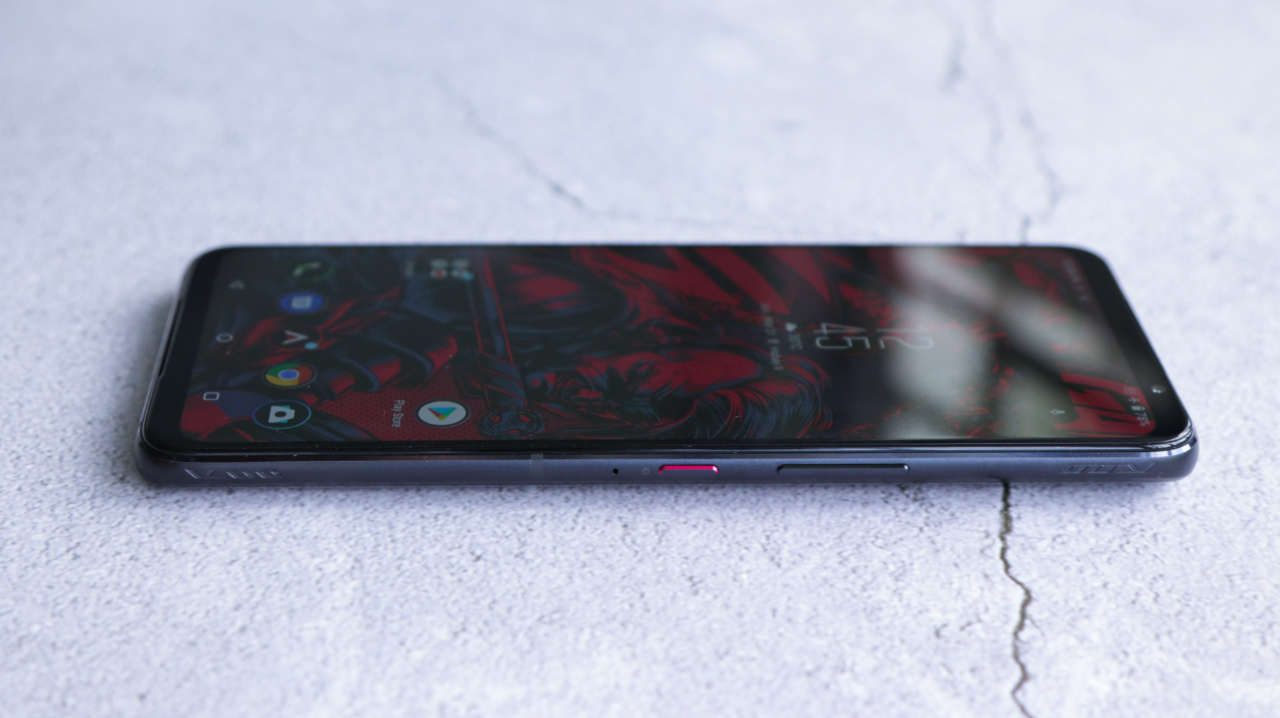 Looking on the right, we have the volume and power/lock buttons. These are placed near the center of the frame for easy reachability. Also found here are the two touch-sensitive shoulder buttons.

On the left, hidden by a removable rubber covering, are the USB-C charging port and metal contacts for the AeroActive Cooler 5. By the bottom is the nano-SIM card tray. 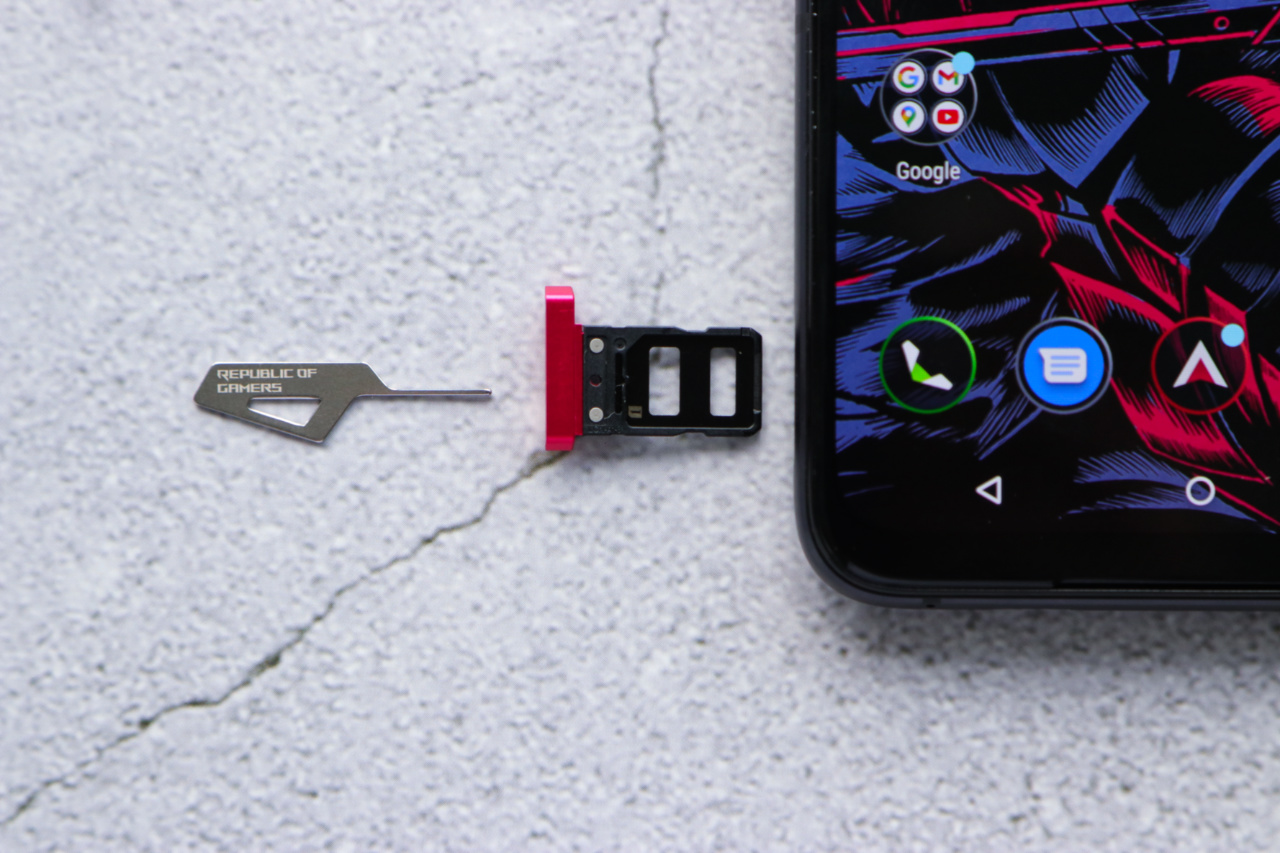 It’s worth noting that the lower left and right sides of the frame are pressure-sensitive, so you can activate or deactivate X-Mode by simply squeezing it. 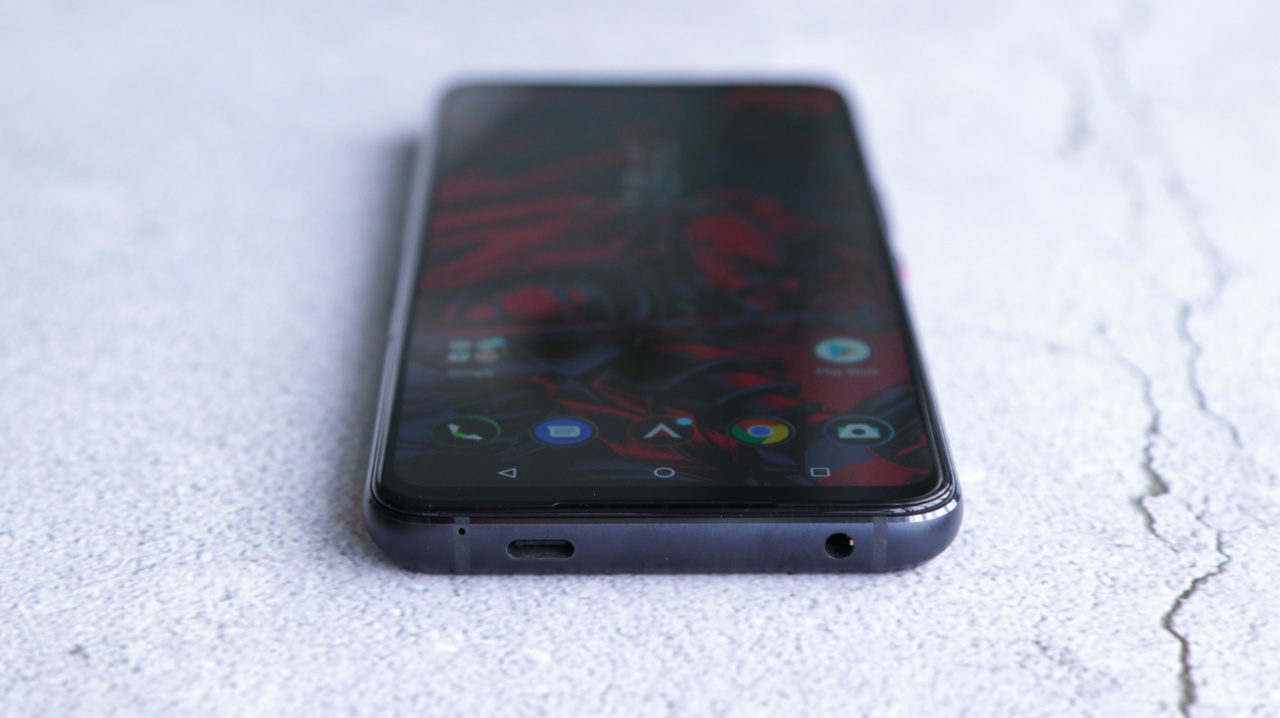 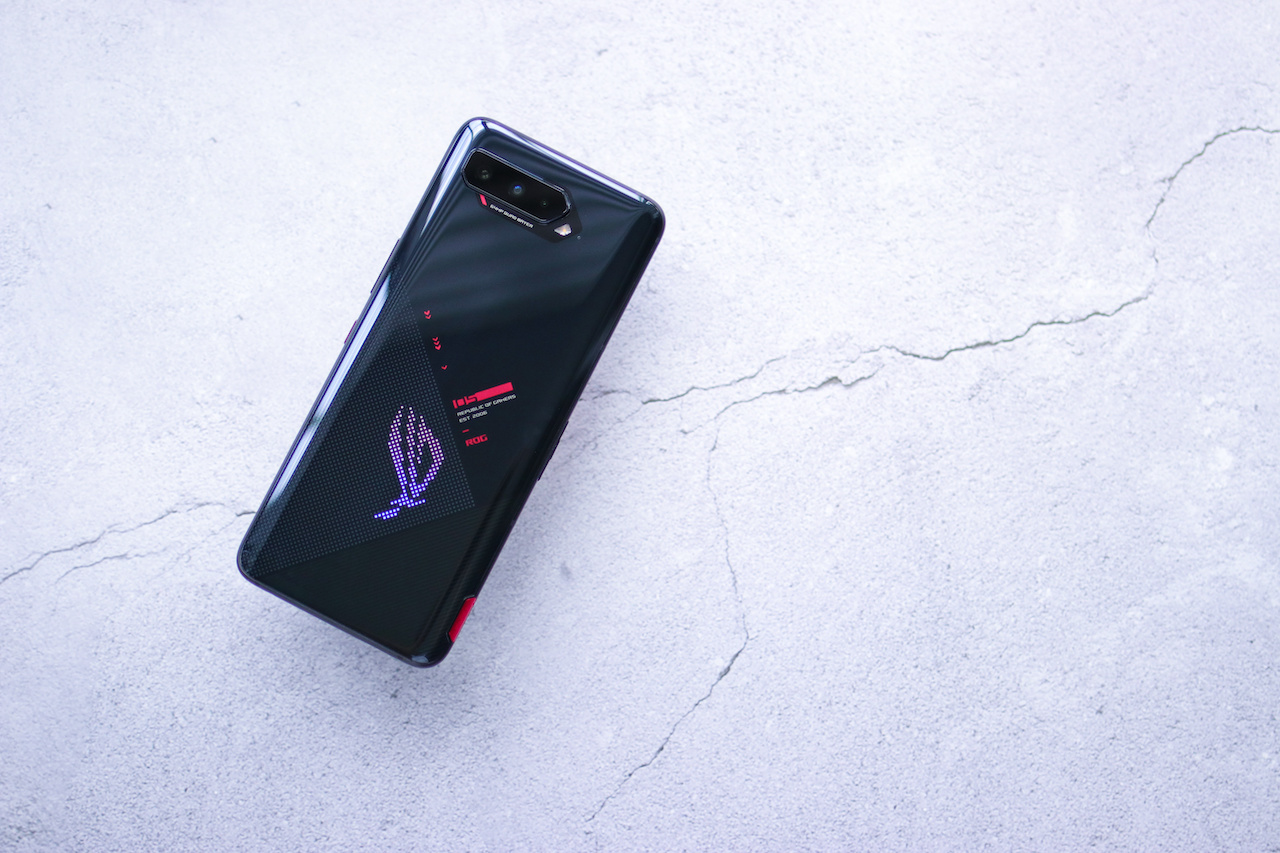 At the back, we have the protruding triple-camera module that houses the 64MP main, 13MP ultra-wide, and 5MP macro. Also found here are the LED flash and a microphone. 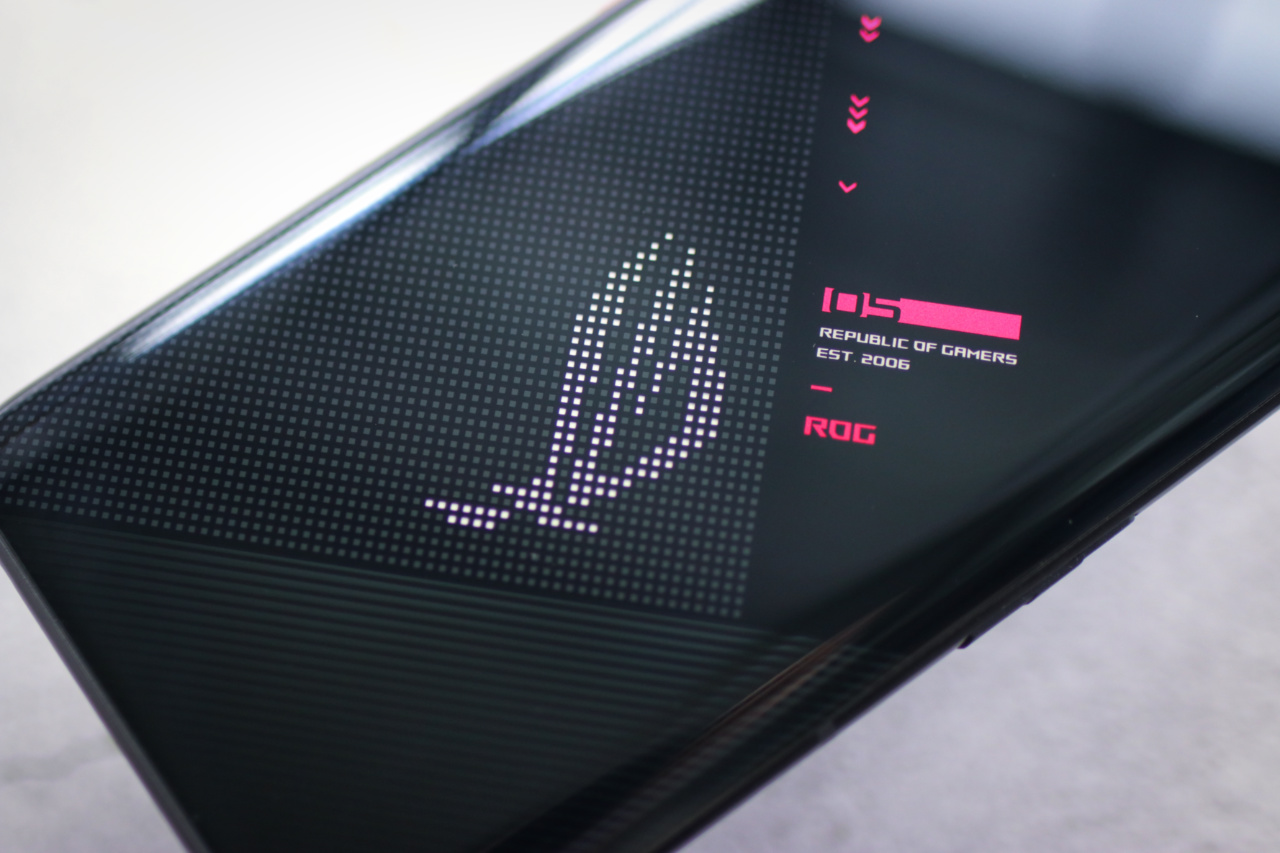 The rear part is where the design improvements over its predecessor are more noticeable. Under the glass are metallic accents, with some dotted designs and diagonal lines to make it more interesting to look at. Yes, RGB lighting is still present and can be observed in the dotted ROG logo and can be customized using the Armoury Crate app. 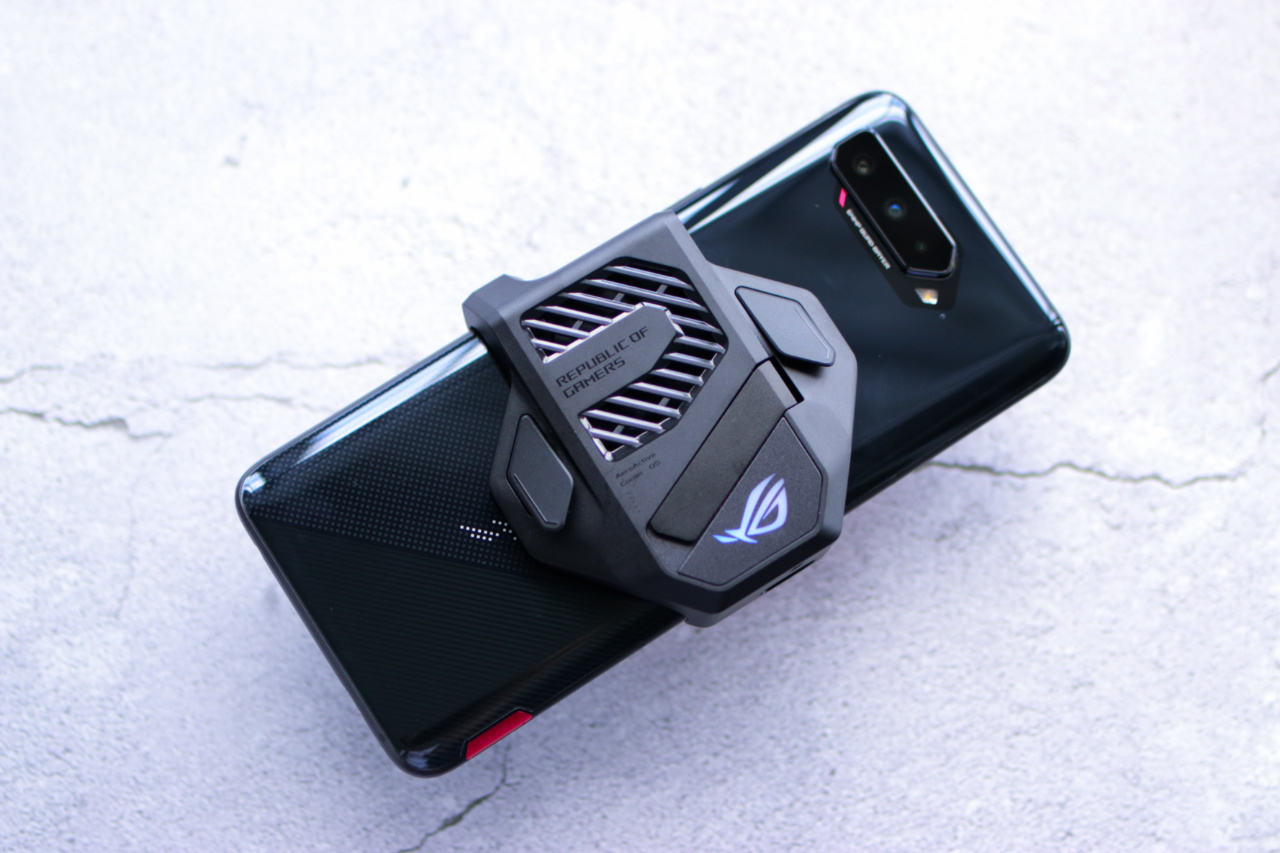 The AeroActive Cooler, which is a key accessory to the ROG Phone line, also got upgrades. Its design is now different and comes with paddle-style buttons for additional controls during gameplay and a built-in kickstand for when you’re spectating or watching movies. The ROG logo also received an RGB treatment. 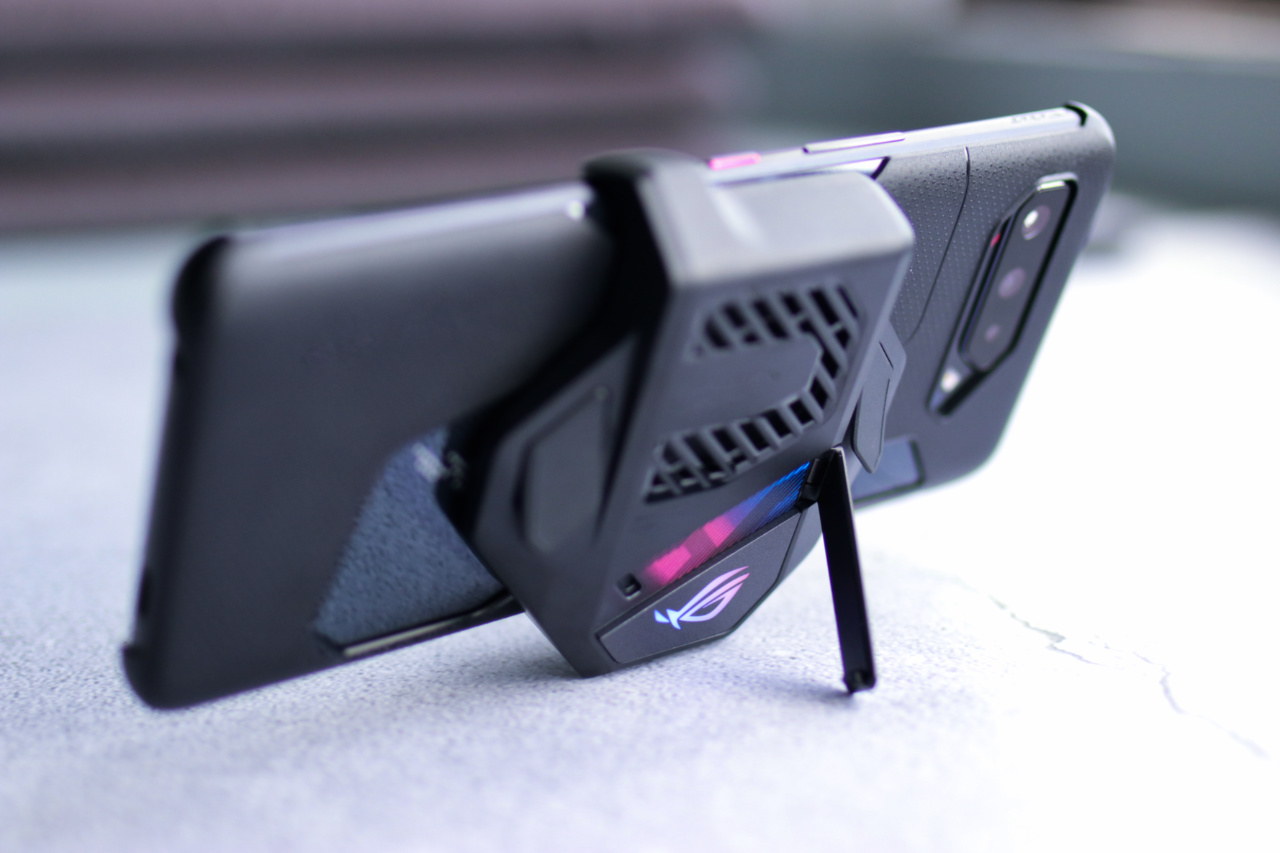 It no longer uses a spring-loaded clamp to attach to the ROG Phone 5 and instead clips in place. The AeroActive Cooler 5 draws power from the ROG Phone 5 via the metal contacts, while the fan speed can be adjusted in the Armoury Crate. 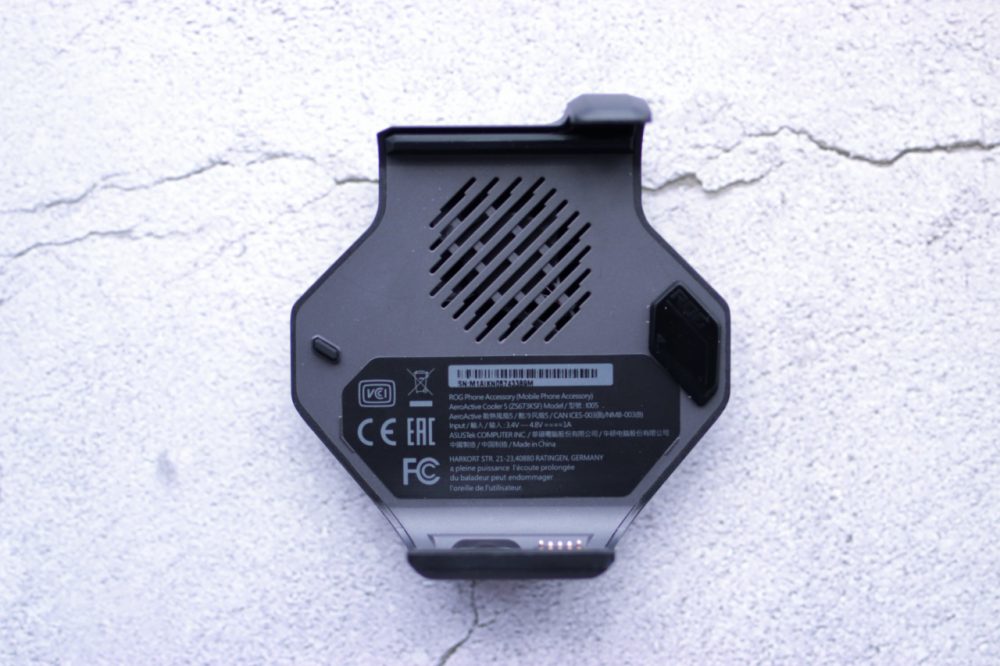 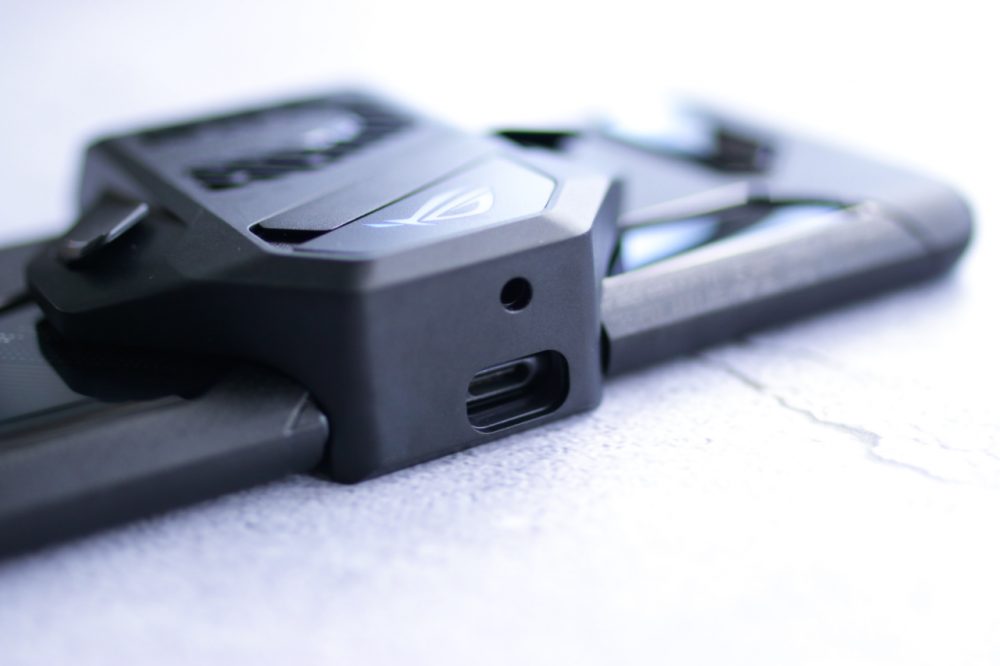 It also provides access to the USB-C port and an additional 3.5mm audio port. 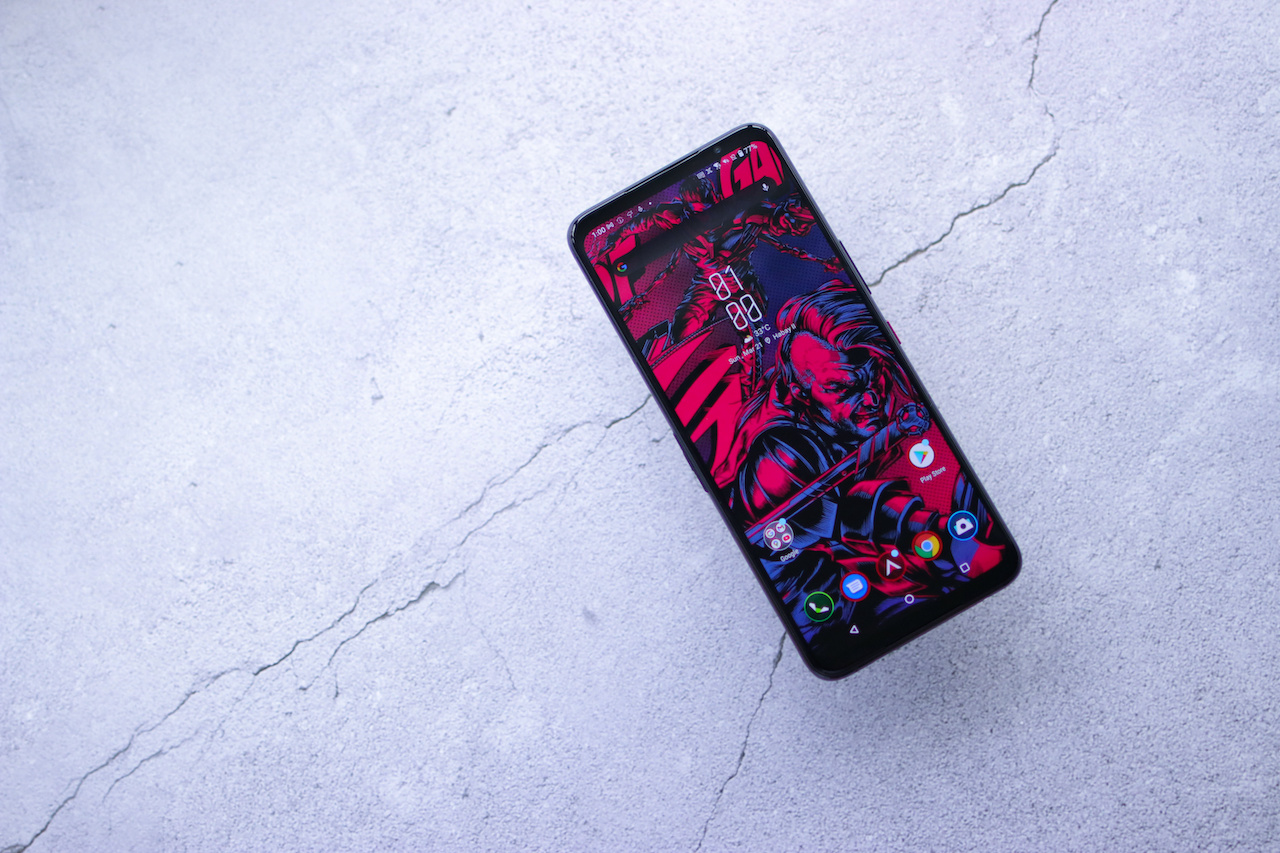 While newer flagship smartphones have almost no bezels, the ROG Phone 5 still has it at the top and bottom. It’s not a disadvantage, though, considering this device’s purpose, as it eliminates the need for a hole-punch or notch and prevents accidental touches when used in landscape for gaming. 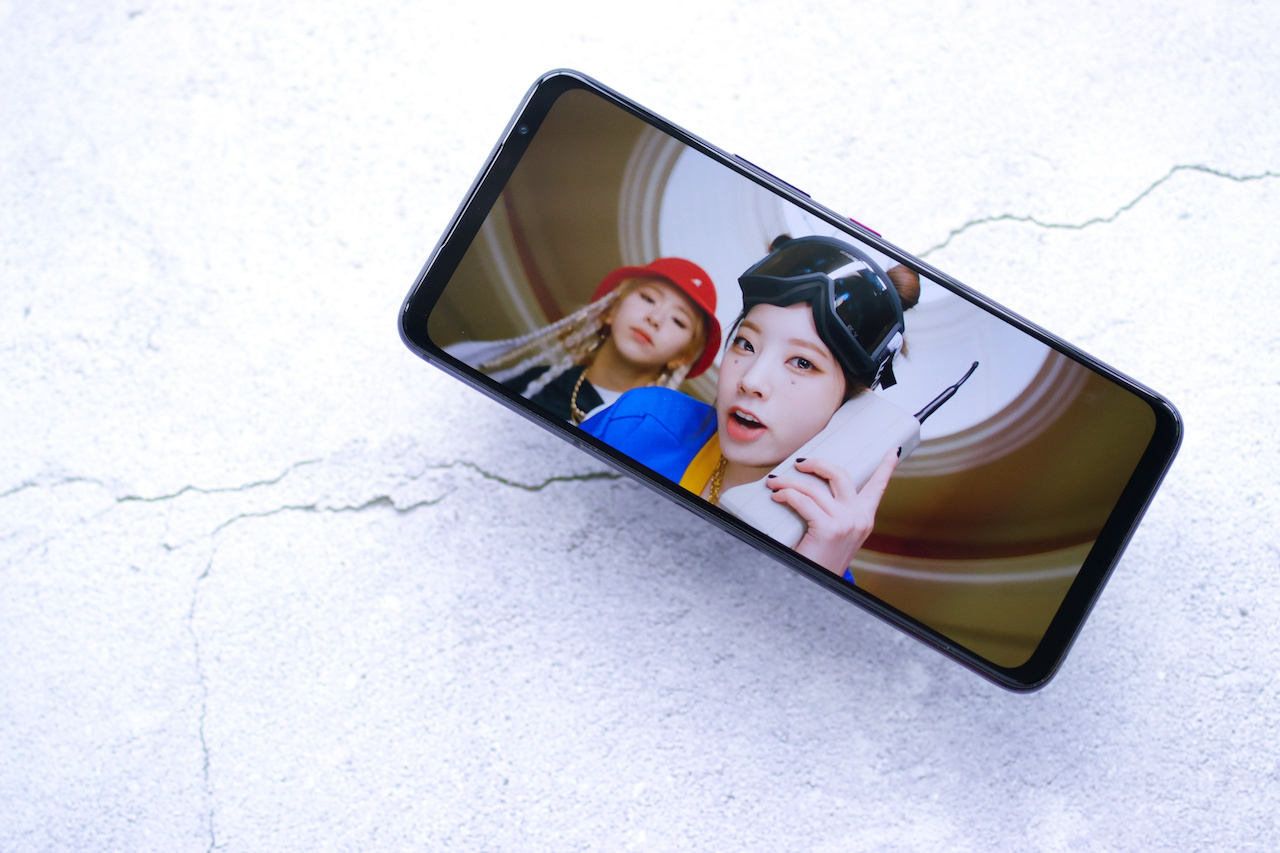 Screen quality is excellent with deep blacks and punchy colors. It’s bright enough to be used outdoors, and at an 82% screen-to-body ratio, it’s immersive for applications like watching videos and playing games. The high refresh rate is really something else as it makes all the transitions and animations really smooth. 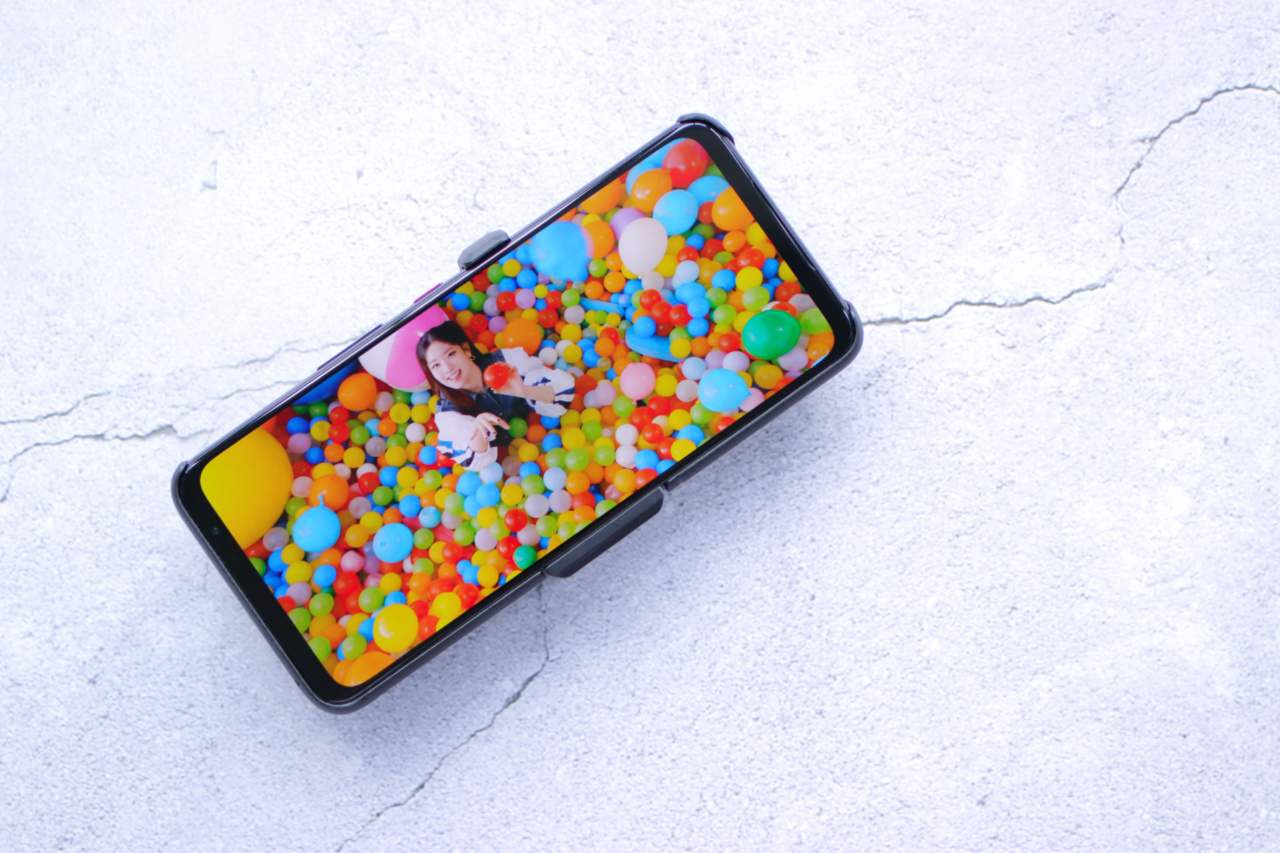 Dive inside the display settings, and you will see customization options like Splendid to adjust color temperature and screen color; Smart screen on to extend the screen on time while you’re looking at it and holding the device upright; Low brightness DC dimming when you’re on 60Hz refresh rate to reduce screen flickering; Always-on Panel, Lift to check phone; Screen saver; and Auto refresh rate to allow the device to switch between 144Hz, 120Hz, and 60Hz automatically depending on the application.

The sound coming from the ROG Phone 5 is superb for a smartphone, thanks to the dual front-facing 7-magnet stereo speaker with Cirrus Logic amplifier. The ROG Phone 5 is also the first smartphone to include Dirac’s patented MIMO (multiple-input and multiple-output) mixed-phase speaker co-optimization technology that treats the smartphone’s dual speakers as a single, multi-speaker system in which the individual speakers work together to create the desired acoustical response.

The result is audio with clear mids and high, enhanced lows, and clean separation between left and right channels for a more natural spatial soundscape. This makes watching movies and playing games even more immersive compared to a traditional dual-speaker setup. You can further enhance the experience by using the AudioWizard app and choosing the right audio profile depending on the scenario.

When it comes to imaging, ROG Phone 5 pretty much has the same configuration as the ROG Phone 3. We have a triple-rear camera setup with a 64MP main, 13MP ultra-wide, and 5MP macro. For selfies, we still have a 24MP shooter. 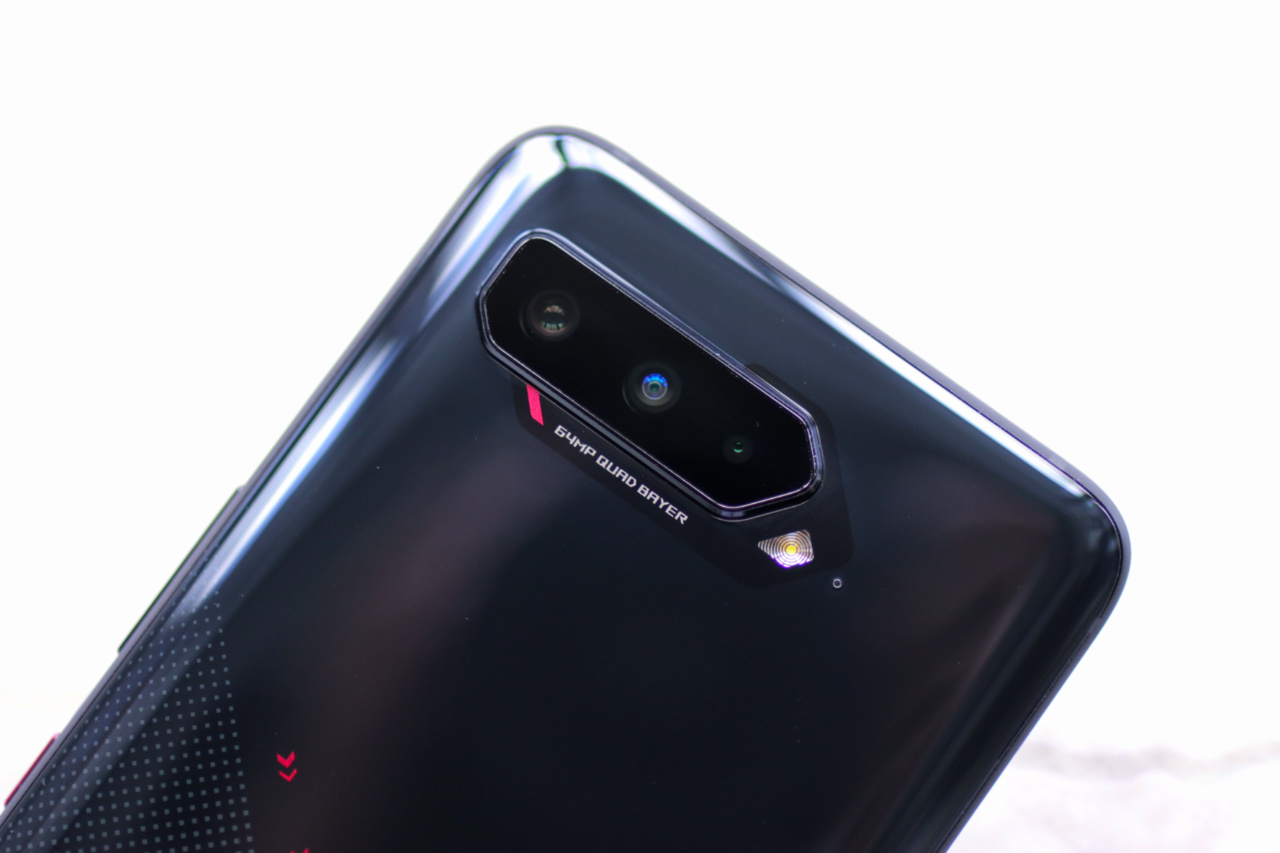 It’s got Portrait, Panorama, Time-lapse, Macro, Motion tracking, Pro, Beautify, and Night mode. For a gaming phone, the ROG Phone 5 has capable shooters as it is fast and can produce images with plenty of detail and rich colors. Selfies are decent, not as sharp compared to selfie-centric smartphones in the market. The beautify feature is not impressive and tends to wash out the face. The portrait effect is good, though, and can produce substantial background blur.


When it comes to videos, users can record at up to 8K resolution at 30 fps. You also have the option to shoot at 4K and FHD at up to 60fps. If you want smooth videos, you can activate the HyperSteady feature, but you’ll be limited to FHD resolution. For Slow-motion, you can shoot at up to 4K at 120fps, FHD at up to 240fps, and HD at 480fps.

Software-wise, it’s running on a skinned UI based on Android 11. The interface feels like a stock Android but with a red theme and circular icons. It’s almost free from bloatware, and you’re only getting the usual Google apps and two ASUS apps — the ASUS Data Transfer and ROG Armoury Crate. The latter is what you’ll frequently interact with when you’re gaming. 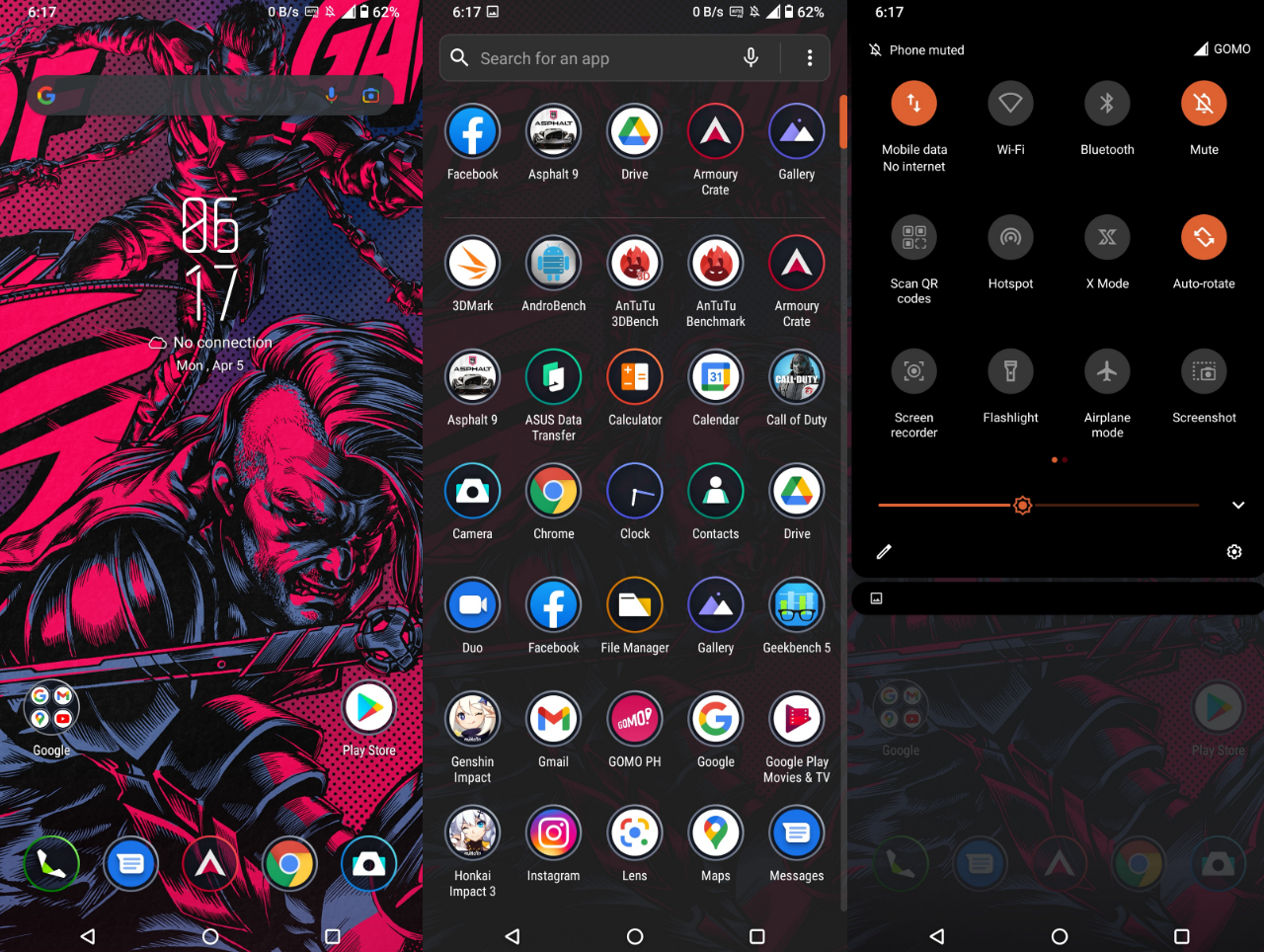 The Armoury Crate serves as your dashboard to access the ROG Phone 5’s gaming features. From here, you can access your Game Library. Each game is given a Scenario Profile where you can tweak Touch settings, Display, Performance modes, Network, AirTriggers, Key Mapping, and Macros. The Console tab brings you the device stats, further customization of performance modes, System lighting, the fan speed of the AeroActive Cooler 5, Game Genie, and AirTriggers. The Connect tab is a newsfeed for ROG Phone-related news and updates, while the Featured tab shows you the games you can download and play. 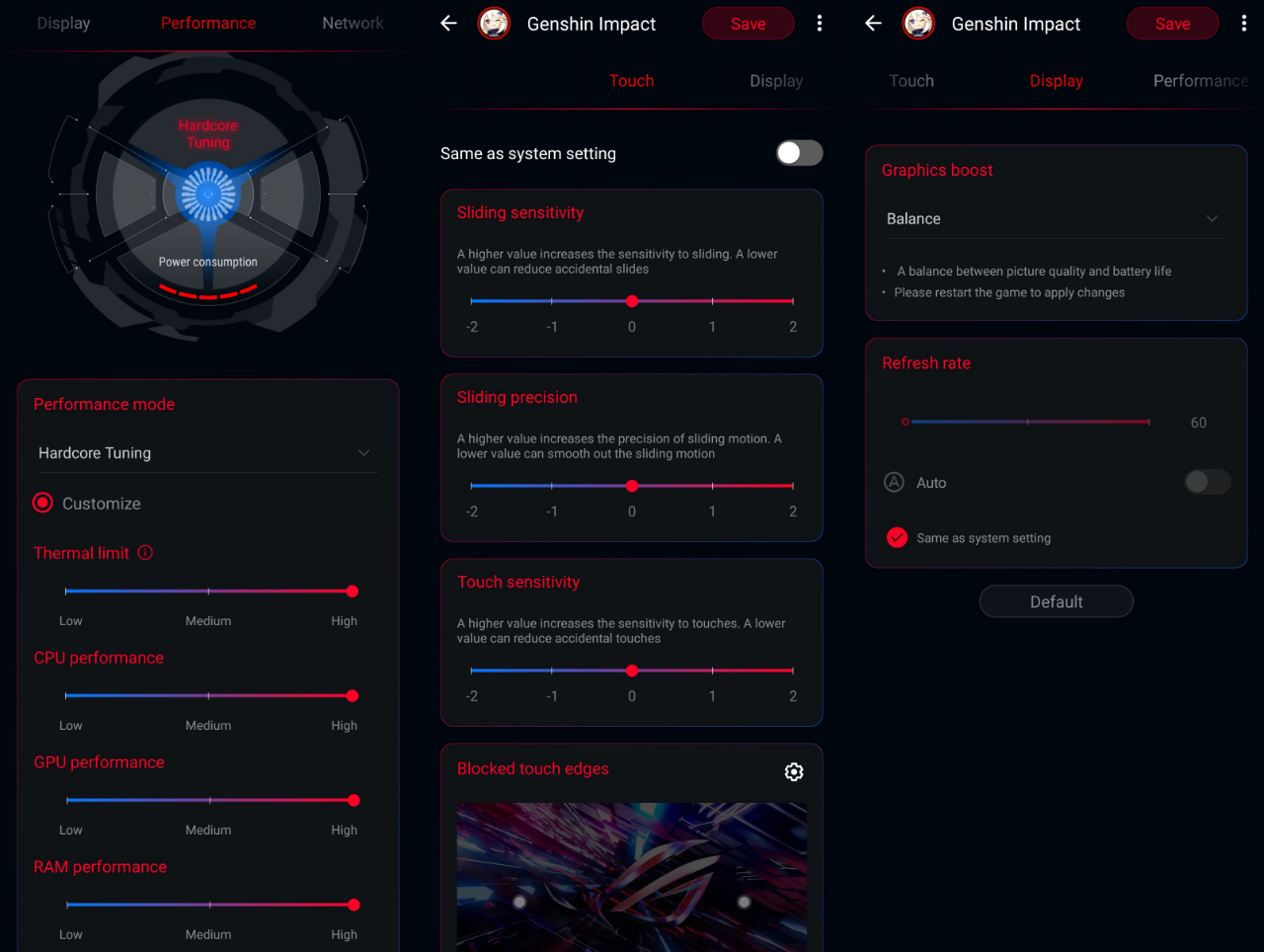 If you’re a hardcore mobile gamer, you’ll be happy to find the customization options available to you to make the phone adapt to your needs.

Powering the ROG Phone 5 is the Qualcomm Snapdragon 888 5G CPU and Adreno 660 GPU. The unit we have has 16GB of RAM and 256GB of storage. As expected, it was able to handle all the tasks we threw at it, including heavy social media use, photography and videography, and gaming, of course. 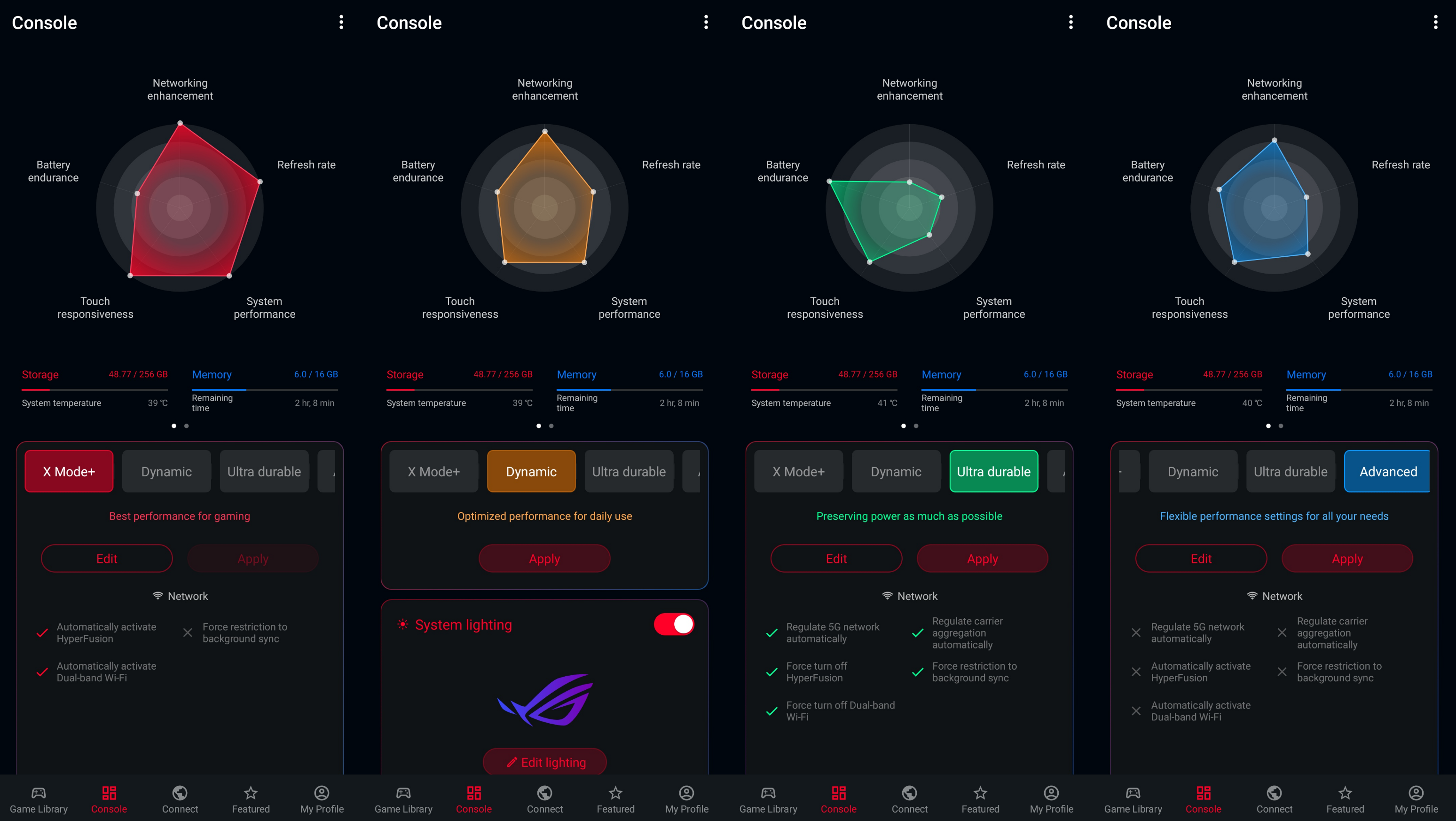 Going back to the Armoury Crate app, you can choose between four different performance modes: X Mode+, Dynamic, Ultra durable, and Advanced. Each profile has its own distinct priorities, so pick one that is best suited for your needs. For gaming, X Mode+ is the best option.

We played Genshin Impact, Honkai Impact 3, and Call of Duty Mobile, all in their highest settings possible, and all of them were able to run smoothly at 60fps. No frame drops, no lag, no stuttering. There’s one thing we noticed, though, the heat. We noticed that the ROG Phone 5 distributes most of the heat to the metal frames.

On Genshin Impact, we were able to record a max temp of 56-C. While it didn’t affect the performance, the device gets too hot to handle, and you’ll definitely feel it if you long press on the AirTriggers. And that’s with the AeroActive Cooler 5. We highly recommend using the protective case. Otherwise, you won’t be able to play comfortably. Check out the benchmark scores below. The ROG Phone 5 has everything when it comes to connectivity. There’s dual-SIM with 5G connectivity, WiFi 6e, Bluetooth 5.2, NFC, USB-C, and multi-band satnavs. There’s also a HyperFusion feature that integrates mobile data with the WiFi connection to stabilize your internet connection quality. There’s also an option to simultaneously use 2.4G and 5G bands of your WiFi network (if your router supports the bands) for further stability.

Battery-wise, we’re looking at a massive 6,000mAh battery. It provided us with 5 to 6 hours of game time at X Mode+ with the AeroActive Cooler 5 and RGB lighting. PC Mark rated it at 18 hours and 52 minutes, while our video loop test got us 24 hours of playback, both using Auto refresh rates. Charging only takes less than an hour, thanks to the 65W fast charger.

The ROG Phone 5 is, without a doubt, one of the most powerful smartphones out there. While there are other flagship devices in the market with Snapdragon 888, this smartphone can provide the best gaming experience possible. Aside from the handy gaming software and hardware features, it can also accommodate the company’s newer accessories to improve the experience. 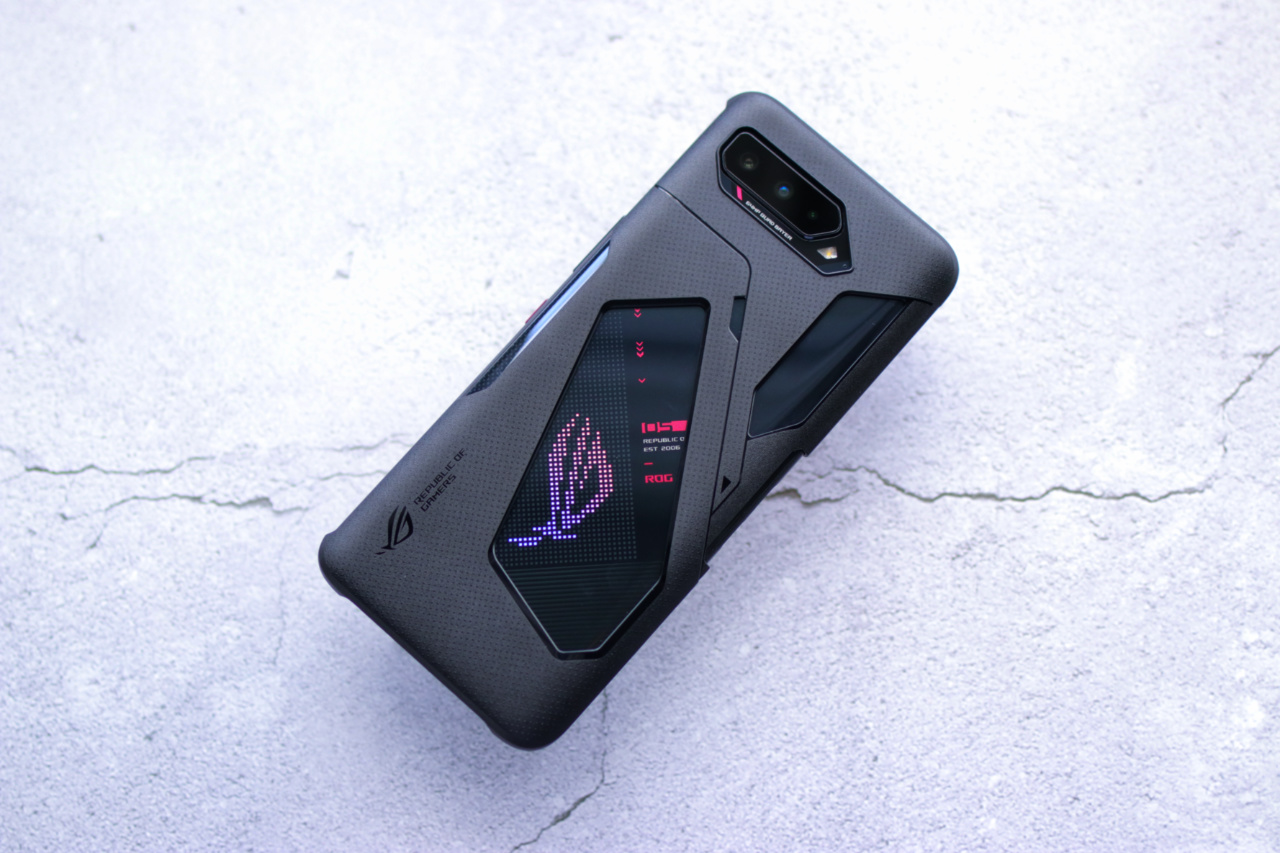 The only concern that we have about this phone is the heat it generates. While we didn’t encounter any performance or overheating issues, we highly recommend that you use the case and the AeroActive Cooler 5.

Should you upgrade from the ROG Phone 3? I don’t see the need yet as the Snapdragon 865+ is still powerful by today’s standards. Unless you want the new design, Snapdragon 888, and faster charging rate, other than that, maybe you should wait for the ROG Phone 6. But even then, if you decide to pull the trigger on the ROG Phone 5, you wouldn’t regret it.

As of writing, the local SRP of the ROG Phone 5 is yet to be announced.