HTC 10 in the flesh, first impressions

Announced early this month, the HTC 10 is the Taiwanese company’s latest flagship handset. Coming from a long line of HTC One devices (th first one being the HTC One M7 right up to the HTC One M9), the HTC 10 basically followed the same design signature but with a couple of changes and hardware improvements. Unlike the previous generations, the HTC 10 has its front panel completely covered with Gorilla Glass which slightly curves toward the edges. A metal frame surrounds the glass panel that stretches all the way to the back in a unibody design.

The dual front-facing speakers have been removed in favor of a more compact design. They redesigned BoomSound with one of the speakers up top along with the front-facing camera and the second speakers at the bottom end beside the USB charging port. That means you have one front-firing speakers and side-firing speakers that provide stereo sound that produces very loud output. 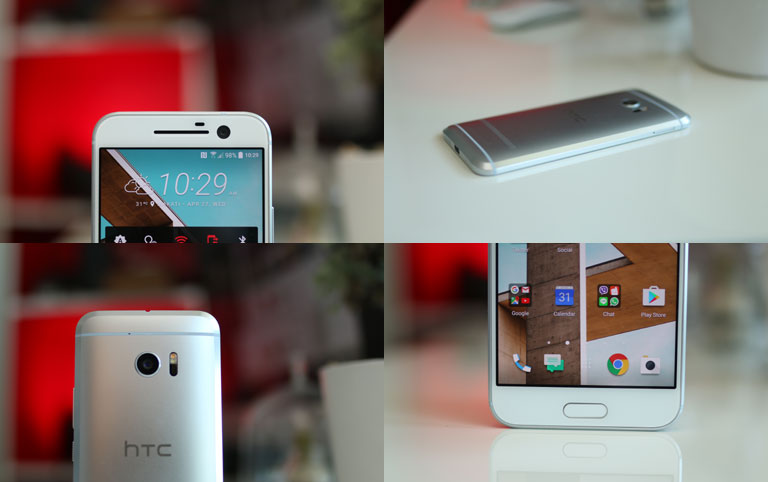 The more compact body also means better one-handed use while the thick chamfered edges offer a more comfortable grip. Up at the front is a physical home button that also serves as a fingerprint sensor. The scanner is actually very fast and responsive although the button itself is slightly recessed and there’s basically nothing to really press in there. Flanking the home button are two capacitive buttons for Back and Recent apps with backlights.

The volume controls and power button are on the right side. The power button has ridges along the top for better grip and easy identification even if you’re not looking at the device. The nano SIM card slot is just above it while the microSD card slot is on the opposite side whcih, by the way, HTC claims can support up to 2 terabytes of expandable storage. 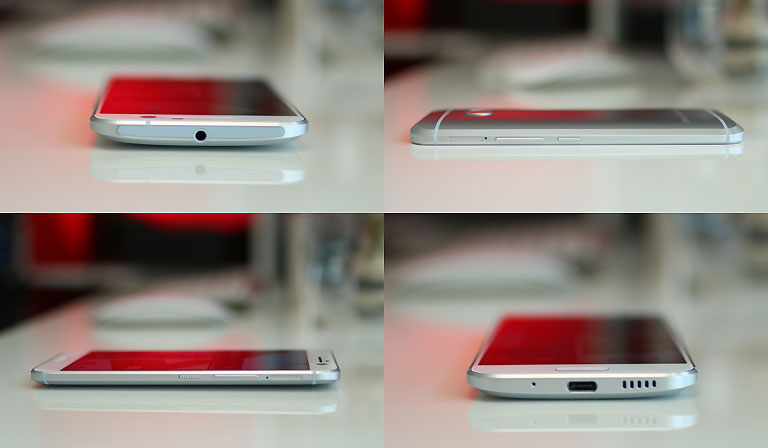 Up top is the 3.5mm audio port in the middle of what could be a polycarbonate strip that is part of the antenna band. HTC has also removed the IR blaster which has been there since the first HTC One. At the bottom end is the USB Type-C charging port, the secondary loudspeaker and the microphone.

The back panel is curved with two antenna bands running across the top and bottom corners. Another noise-canceling mic is placed along the upper band. The rear camera is in the middle with the dual-LED flash and a laser autofocus on the right side. The display uses a quad HD Super LCD 5 which is HTC’s usual display technology in its flagship devices. It’s comparable to the usual IPS LCD panels and though not as rich or vibrant as AMOLED, it has its own advantages.

Powered by a Snapdragon 820 chip with 4GB of RAM, the HTC 10 is expetced to bring the same performance as the SD820-flavored Galaxy S7, Xiaomi Mi 5 Pro and the LG G5. The handset runs on the latest Android 6.0.1 Marshmallow with a custom HTC Sense UI. It has that same look and feel as the previous HTC Sense user interface but has been trimmed down in some corners. For one, there are only fewer pre-installed apps (only one calculator and calendar instead of two — one from Google and another from HTC) and bloatware. 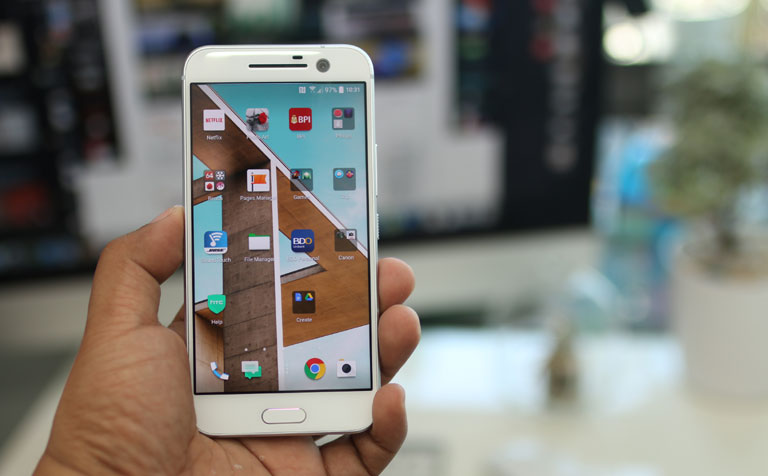 We have yet to test out the 12MP rear camera and figure out if the image quality is comparfable with other flagship handsets. More on that in our full review along with benchmark scores and battery life test. The HTC 10 is no yet officially available in the Philippines but several online stores like Widget City are carrying them for about Php32,500 (see listing here).

Check back with us next week for the full review of the HTC 10.