The LG G Pro Lite Dual is the dual-SIM variant of the G Pro Lite and is one of the Korean company’s recent effort to turn a former powerful flagship into a mid-range yet highly-capable device with a little extra on the side. Let’s take it for a spin by reading our review below. 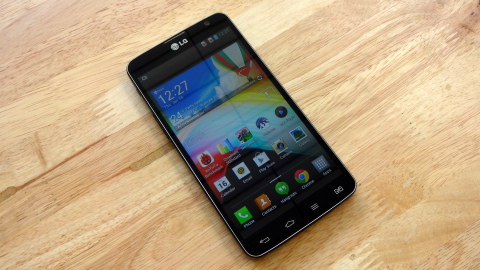 The LG G Pro Lite Dual, steps away a bit from its predecessor, the Optimus G Pro, in terms of looks. Primarily because the G Pro Lite Dual doesn’t sport a physical home button unlike its single-SIM brother, the G Pro Lite. Instead, it has four capacitive buttons below the display for the three basic Android navigation with the addition of the dedicated key for the SIM switch. 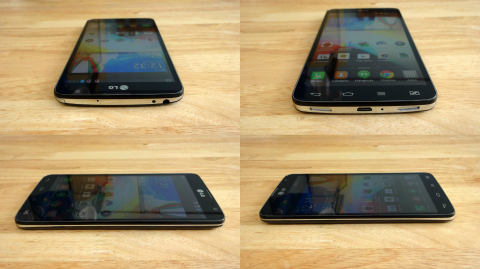 Other notable physical features of the G Pro Lite Dual are the dual-speakers, dedicated Memo key on the left side, the IR Blaster and the integrated Rubberdium Stylus. 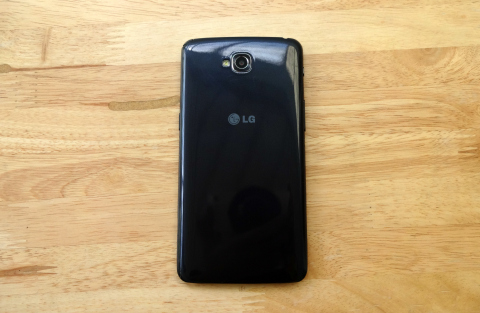 On hand, the Lite Dual feels relatively large because of its 5.5-inch display yet it still feels comfortable at 9.4mm thin and 161g weight. The build actually reminds us of the G2, light yet well-built. In addition, the smooth plastic finish and the chrome accents on the sides and the front add to its simple yet attractive design.

The Lite Dual sits in the “phablet” (or whatever you want to call it) category because of the 5.5-inch display. A screen this large has its benefits especially if it has at least an HD resolution. In the case of the Lite Dual, it has qHD (540 x 960) resolution with a total pixel density of 200ppi. This might turn off some users who prefer a higher pixel count in a display. Pixels on icons are observable, especially when you look close enough, but the quality is still acceptable. However, the low resolution will make itself known once you view texts.

On the bright side, LG equipped the G Pro Lite Dual with an IPS LCD so viewing angles and colors are really good. Outdoor legibility is acceptable but make sure you manually crank the brightness to maximum as it doesn’t have auto-brightness.

The G Pro Lite Dual comes with Android 4.1.2 out of the box with LG’s UI skin on top. This older version of Jellybean is a bit of a downer considering that most phones in its class are running Android 4.2. We’ve been checking for software updates but unfortunately there is none. We can only hope that LG includes the G Pro Lite Dual when Kitkat finally rolls out to the G family. Being a new smartphone in LG’s G lineup, the G Pro Lite Dual comes with some of the best bells and whistles found on other higher specced device. That includes the Knock to unlock and Quick Remote app that works on popular TVs, DVD and Blu-ray players.

In addition, it has a Quick Memo feature that takes advantage of the dedicated physical key on the top left side. All you need to do is press it to take a screenshot of whatever you have on display then doodle on it using the stylus. 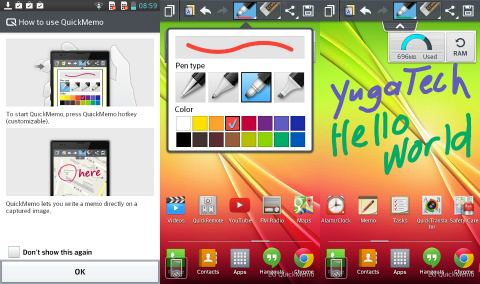 As for the apps, the G Pro Lite Dual doesn’t come with a lot of bloatware that one might find unnecessary. It has a dictionary, the LG Backup, Memo, Quick Translator, Remote Call Service, Safety Care, SmartShare, Task Manager, LG’s SmartWorld, Polaris Viewer 4, and Opera Mini browser. These apps are very handy and most wouldn’t mind having them on board. 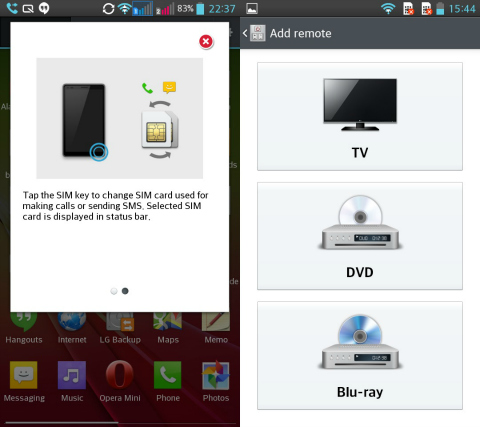 On the downside, this device only comes with 8GB of internal storage. Leaving you with a measly 4.67GB of space to wiggle around. Better have a microSD ready for your MP3s, photos, and videos.

Speaking of photos and videos, the G Pro Lite Dual has an 8 megapixel rear camera with LED flash. I’ll tell you up front that this is not the smartphone to begin with if mobile camera performance is your priority. Autofocus is slow and isn’t always spot on. Images produced appear soft and lacks sharpness. Colors are good though but tend to over-saturate. Take a look at the sample photos below:

On the bright side, the camera comes with different modes like Panorama, Continuous shot, and Beauty shot. You can also manually adjust brightness, ISO levels, White balance, add color effects, and activate the shutter using your voice.

When it comes to video recording, the device can record HD videos at 30fps. Watch the sample below:

As for multimedia performance, the G Pro Lite Dual excels in sound quality thanks to the dual speakers. It can produce loud and rich sounds which come really handy when watching a movie or filling a small room with music. Take note, however, that the G Pro Lite Dual can’t smoothly play a 1080p video file. Better stick to 720ps on this one.

Powering the G Pro Lite Dual is a MediaTek MT6577 dual-core CPU clocked at 1GHz and coupled with 1GB of RAM. It might feel underwhelming on paper considering that a lot of smartphones of similar caliber feature quad-core CPUs but so far everything is fluid and lag free when it comes to basic tasks. We played basic games on it like Zombie Tsunami, Despicable Me, Perfect Kick, and Colossatron. We sometimes experience some stuttering especially when other apps are running in the background but nothing serious and can be disregarded. The G Pro Lite Dual is powered by a large 3,140mAh battery. It went through our usual battery test of running a 1080p video in Airplane mode with 0% volume at 50% brightness. The result is a total of 5.88 hours worth of continuous movie playback. That’s below average considering that most smartphones with that battery size can last at least 7 to 8 hours.

To conclude, the LG G Pro Lite Dual is a good mid-range offering that packs a big display with good build, a stylus, great dual-speakers, dual-SIM support, a very useful IR blaster for your TV, and a huge battery. Another strong suit of this device is its price. Original SRP is at Php15,990 but it is now on sale for just Php13,990 with additional freebies. However, while we respect the hardware limitations to keep the price down, we’re hoping that LG updates its firmware to a newer version. It may not get Kitkat but at least bump up the Jellybean a bit. 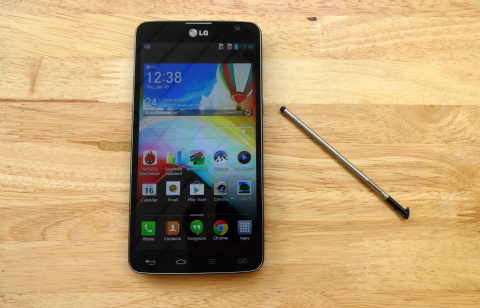 What we liked about it:
* Large display with IPS
* Good build
* Inclusion of stylus
* Great speakers
* Large battery
* Dual-SIM

I am in fact glad to glance at this web site posts which carries tons of valuable information, thanks for providing these data.

Quality posts is the secret to interest the people to pay a quick visit
the web page, that’s what this website is providing.

Hi, i feel that i noticed you visited my blog thus i
came to return the want?.I’m trying to in finding issues
to improve my site!I assume its ok to make use of some of your concepts!!

This piece of writing will assist tthe internet
people for creating new website or even a blog from start to end.

What’s up, after reading this amazing article i am also
cheerful to share my knowledge here with mates.

Howdy! I know this is kinda off topjc but I’d figured I’d ask.
Would youu be interested in exchanging linkks or maybe guest writing a blog article or vice-versa?
My site addresses a lot of the same topics as yours aand I feel we
could greatly benefit from each other. If you happen to be interested feel free to send me an e-mail.
I look forward to hearing from you! Awesome blog by the
way!

First of all I would like to say wonderful blog! I had a quick
question which I’d like to ask if you don’t mind. I
was interested to find out how you center yourself and
clear your mind prior to writing. I have had a hard time clearing my mind in getting my thoughts out.
I do take pleasure in writing but it just seems like the first
10 to 15 minutes tend to be lost just trying to figure out how to begin. Any recommendations or hints?
Thanks!

What’s up i am kavin, its my first occasion to commenting anywhere, when i read this post i thought i could also create comment due to
this good piece of writing.

These are perfect for sitting out on the porch and
watching the waves crash towards the beach. It does not necessarily mean the whole
room has to be neon greens and yellows. Too many then became
addicted and of course, regular customers.

Love this website, wonderful stuff here, was actually a little sceptical with regards to obtaining a steam shower unit for our house but
the content here sorted my head out, incredible thanks for your
insight

Hey there! I could have sworn I’ve been to this site before but after reading through some of the post I realized it’s
new to me. Anyhow, I’m definitely glad I found it and I’ll be
book-marking and checking back frequently!

Good day! I know this is kinda off topic but I was wondering if you knew where I could locate
a captcha plugin for my comment form? I’m using the same blog platform as
yours and I’m having problems finding one? Thanks a lot!

“Nude swimming for boys was a no-nonsense, practical, easy, conforming and cohesive, method of handling 30 exuberant boys in one hour. No matter what size you are you should enjoy the freedom of swimming. Plus, I can’t ever reach certain parts of my back without contorting my body and looking like I’m trying to scratch some terrible itch.

In this way it almost mimics social networking sites, especially where it allows you to truly customize your character and and friends utilizing the
Racing Live Crew Code system. If you’re bored with racing
only cars on your i – Phone, then take a break and get
on your quadbike for some muddy and sandy fun. IPad is par mini i – Pad
(3rd generation) that was selling a couple of weeks
with a happy owner of.

We are a group of volunteers and starting a new
scheme in our community. Your web site provided us with valuable information to work on.
You’ve done an impressive job and our whole community will be thankful
to you.

I savour, lead to I found exactly what I used to be having
a look for. You have ended my four day long hunt!
God Bless you man. Have a great day. Bye

It’s going to be finish of mine day, except before end I am reading this impressive
post to improve my know-how.

I am genuinely grateful to the holder of this web page who has shared this fantastic piece of writing
at at this time.

Heya i’m for the first time here. I came across this board and I find It
truly useful & it helped me out much. I hope to give something back and help others like you helped me.