Announced just last week, the OnePlus 3 is the company’s newest high-end budget flagship smartphone. This is the third generation smartphone from OnePlus which is popular for putting top-of-the-line specs in a phone that was the cost of a mid-range device. Undeniably, this phone seemed to be outstanding on paper. But does it live up the hype? Here’s our quick hands-on and first impressions for the OnePlus 3.

The full metal unibody of the OnePlus 3 is made up of aluminum alloy which contributed to the much lighter weight at just 158 grams and thinness of the device at 7.33mm , which is nearly the same as the LG G5 and the Samsung Galaxy S7. Handling the device is not that difficult even with one-handed usage. However, the smooth metal build of the device makes it quite slippery that may probably give you a reason to put up a back cover or case right away to prevent any accidental slip or drops that might occur. 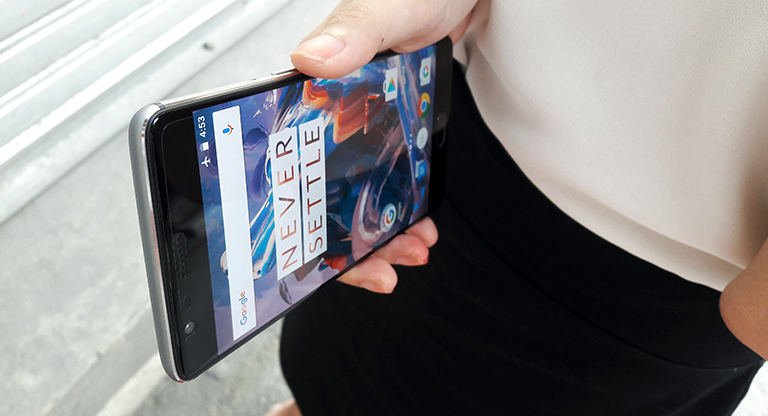 On the front of the device is an Optic AMOLED display (which is actually just Super AMOLED) with really thin side bezels, measuring at 5.5-inch in a full HD resolution and 2.5D Gorilla Glass 4 protection. 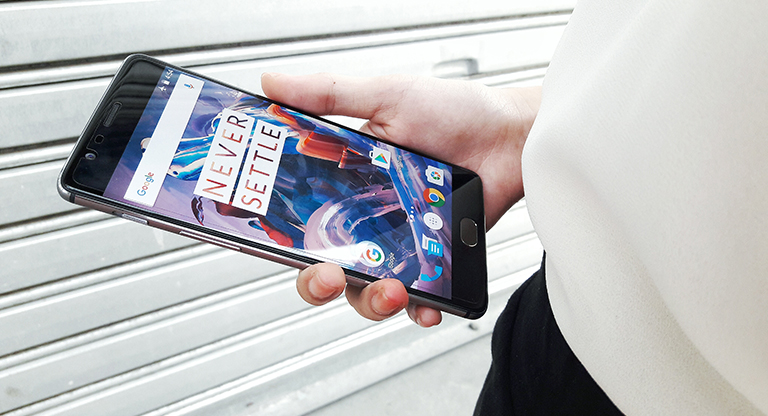 Located at the upper left side is the RGB notification LED and an 8-megapixel front camera situated before the sensors. On the chin part of the device, there are three physical capacitive buttons — Recent Apps, a Home button which doubles as a fingerprint sensor and Back. However, you could swap the order of recent and back buttons on the Settings menu and you also have an option to use on-screen navigation if you like (a feature we’ve only seen in 1+3). 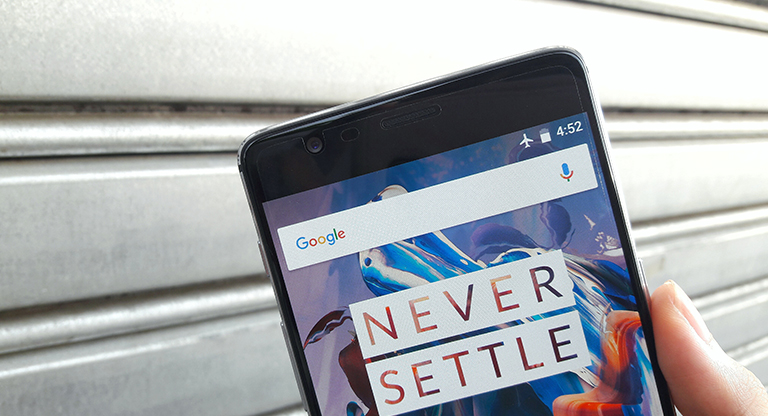 The right side is where you’ll find the power/lock button with the SIM slot next to it. The SIM tray supports dual nano-SIM cards. Unfortunately, there’s no slot for microSD card, so space is limited to the 64GB internal storage. The left side has the volume rocker and an alert switch that was first introduced on the OnePlus 2. This two-stage switch lets you selectively mute alerts based on priority and notifications you want to receive. At the bottom end is the built-in speaker, a 3.5mm headphone jack and a USB Type-C port with support for up to 4A/5V charging that allows the device to reach 60% battery life in about half an hour. 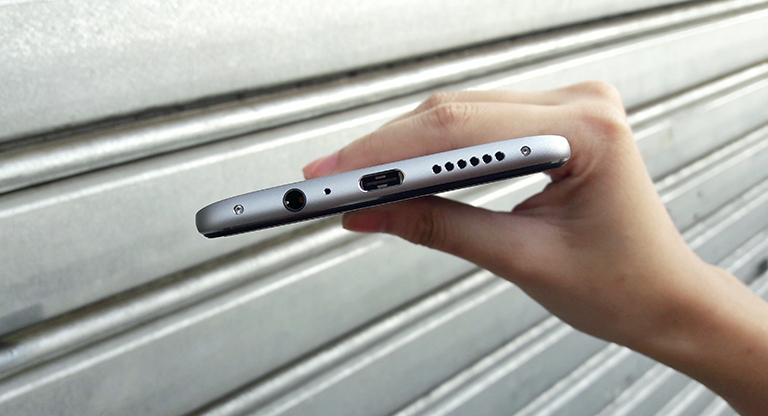 There’s a OnePlus logo printed on the back, antenna lines, LED flash and a slightly raised camera lens just right below it. The rear camera sports a 16-MP Sony IMX298 sensor with an f/2.0 aperture, electronic and optical image stabilization, PDAF, HDR, and a 1.28-inch sensor. It produces clear, vibrant with not so over saturated images. You can quickly launch the camera with a double press of the power button, and the camera app itself is similar to Google’s stock camera. It also features a manual mode for white balance, ISO, shutter speed, and manual focus tweaks. And HDR mode which is set to ON by default for better low-light performance. We run a quick AnTuTu benchmark test on the OnePlus 3 and its score hits above 144,000 beating the Samsung Galaxy S7 score of over 12,000. 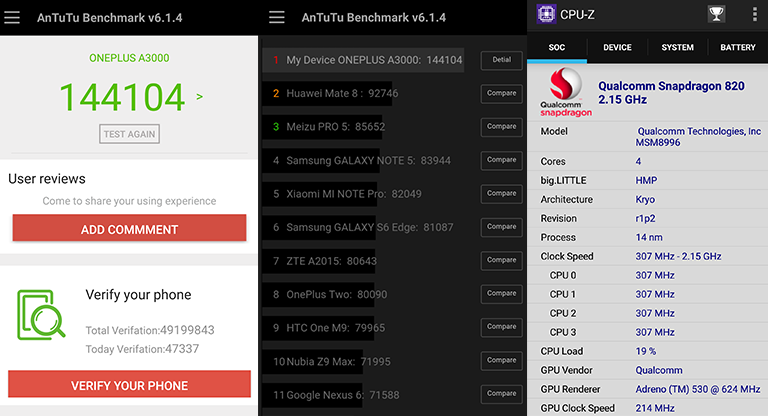 As for the rest of the specs, the OnePlus 3 is powered by the latest Qualcomm Snapdragon 820 CPU and 6GB of RAM which is more than enough compared to the 3GB or 4GB we usually get with high-end handsets. Launching apps is pretty snappy but the device tends to slow down if you re-launch a certain app when there are more than six applications in the background. In other words, it can’t cope with keeping apps in memory, probably due to overly aggressive memory management. This is a known ram management issue of the device and as per the co-founder of OnePlus, Carl Pei, they have decided to limit its RAM’s potential in favor of longer battery life. The good news is that this issue will be fixed on the next OTA update, specifically with the 3.1.4 OxygenOS update. Users are also limited with 64GB internal storage option with no micro-sd card expansion support. Running the software department is the latest Oxygen OS 3.1.3 which is based on Android 6.0 Marshmallow. Its UI has a close-to-stock feel with a few added customization features for better user experience. The battery is built-in at 3,000mAh and supports OnePlus’ latest Dash Charging Technology which claims to charge the device of up to 60% in just 30 minutes. We’ll be doing an in-depth review for the OnePlus 3 on the following days so stay tuned. 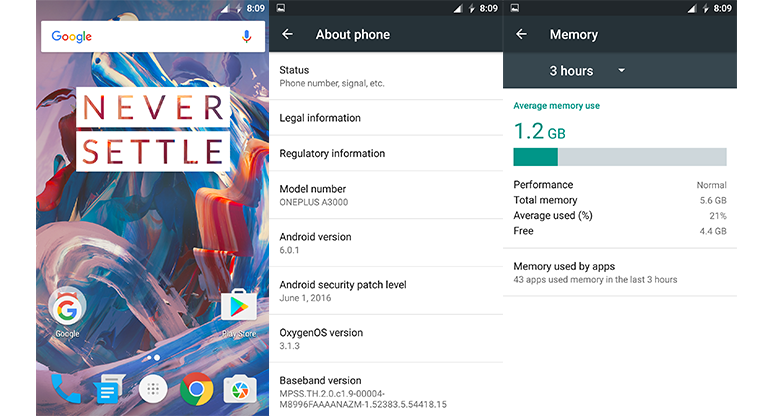 The OnePlus 3 is not yet officially released in the Philippines but you can get it from online sellers like Widget City for Php20,990 (see listing here).