There are more smartphones to wait for in the second half of the year, and one of them is the much-hyped Samsung Galaxy Note 4. GSMArena has obtained some photos of the aforementioned Galaxy Note 4 in detail, and it looks pretty authentic and consistent. 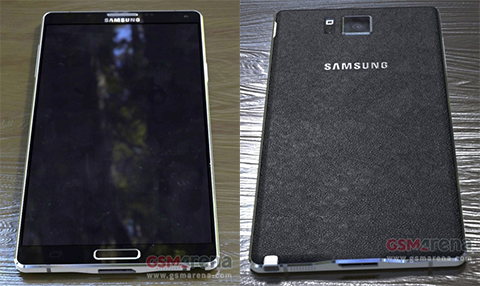 Just as it has been, the Note 4 looks to be having a pretty huge screen with thin bezels. A fingerprint scanner may be working itself into the physical home button once again and another sensor, potentially a heart rate monitor, is found beside the camera. Beside the stylus, the port for charging is probably going to be micro USB 3.0, and since there is nothing to cover it, we may not see waterproofing carrying over from the Galaxy S5. The back still seems like it’s going to be plastic emulating a leather texture, but note that the side frame actually looks like it’s going to be metal this time.