Xiaomi has just released its latest flagship device, the Mi 10, sporting a color-accurate display, top-of-the-line chipset, LPDDR5 RAM, UFS 3.0, and very capable cameras. Recent releases from both Samsung and Huawei also have all of these features, albeit each device has its own unique strengths. If you’re in the market for an affordable flagship device, then you may want to read on to see which of the three to get. 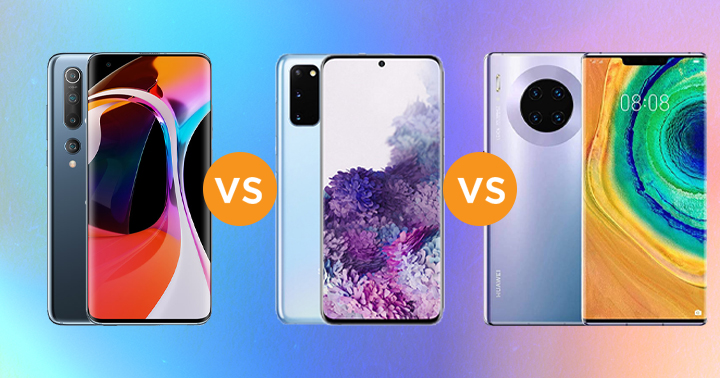 Moving on to performance, all three devices are equipped with the latest flagship SoCs. The Mi 10 comes with a Snapdragon 865, the S20 comes with either a Snapdragon 865 or Exynos 990 depending on your location, and the Mate 30 comes with Kirin 990. As for system memory, both the Mi 10 and S20 come with either 8GB or 12GB of LPDDR5 RAM, while the Mate 30 only comes with 8GB (of unspecified) RAM. Storage-wise, all three feature the ultrafast UFS 3.0, with the Mi 10 having either 128GB or 256GB, while the S20 and Mate 30 can only be had with 128GB. As for expandability, the S20 can handle up to a 1TB MicroSD card, while the Mate 30 can handle up to 256GB on a NanoSD Card. Overall, all three devices are highly capable and should be able to handle all the tasks you throw at it. However, having the option to go up to 12GB of RAM and 256GB of UFS 3.0 storage makes the Mi 10 the winner in the performance department. (Until we, or other reputable sources, are able to benchmark the performance of the S20 and Mi 10.)

As for the cameras, the Mi 10 is the most capable and versatile of the three. It comes with a 108MP primary shooter, a 13MP ultra-wide, 2MP macro, and a 2MP depth sensor. The S20, on the other hand, comes with a 12MP main, 12MP ultra-wide, and a 64MP telephoto camera. Lastly, the Mate 30 sports a 40MP SuperSensing, 16MP ultra-wide, and an 8MP telephoto camera. Regarding the front cameras, the Mate 30 is equipped with the highest resolution of the three, with 24MP, with the Mi 10 closely behind with 20MP, with the S20 having the lowest resolution of 10MP. As we have mentioned before, the pixel count is not the be-all and end-all of cameras, so take this with a grain of salt.

In terms of connectivity, the Mi 10 and S20 are capable of WiFi 6 and 5G connectivity, although the local variant of the S20 is locked to 4G. The Mate 30, on the other hand, is limited to 4G Dual VoLTE and WiFi 5. The Mi 10 also comes with the newer Bluetooth 5.1, which delivers notable improvements on proximity accuracy and efficiency, while the S20 and Mate 30 only come with Bluetooth 5.0. We’re giving the Mi 10 the win for 5G connectivity and Bluetooth version, although international S20 users can use 5G.

On to security, all three devices have the same biometrics installed, which include an in-display fingerprint scanner and face recognition. As for screen protection, only the Mate 30 is advertised to have Corning Gorilla Glass 6 protection. That being said, it’s hard to imagine Xiaomi and Samsung not to inclue any screen protection for their flagship models. Lastly, the S20 comes with IP68 dust and water resistance, while the Mate 30 comes with an IP53 rating. Xiaomi is yet to disclose any form of Ingress Protection rating for the Mi 10. Given our assumptions regarding screen protection, the S20 is the most protected device with its IP68 rating, followed by the Mate 30.

As for the other features, all three devices feature a USB Type-C port, GPS capabilities, NFC, and Android 10 out of the box. Unfortunately for you audio lovers, only the Mate 30 comes with a 3.5mm audio jack, although you could get a USB Type-C to 3.5mm converter. When it comes to battery capacity, the Mi 10 has the largest of the three with 4,780mAh, followed by the Mate 30 with 4,200mAh, and the S20 with 4,000mAh. All three devices also sport fast charging and wireless charging, although the Mate 30 has the fastest (wired) charging capabilities with 40W, followed by the Mi 10 with 30W, and lastly, the S20, which is capable of 25W.

The Mate 30 is already available for purchase, while the S20 is open for pre-orders, and the Mi 10 is expected to launch globally on Feb 23. Here are the prices of each smartphone:

Based only on the converted prices, the Mi 10 offers the most value out of the three smartphones. For around PHP 30k, you get a color-accurate, fast refresh rate, fast response display, a 108MP camera, more RAM and storage options, and the biggest battery capacity out of the three. If you want to get your hands on a flagship, 5G capable device, then the Mi 10 is the most economical option available in the market right now.

If, however, you value displays the most, then the S20 might be the phone for you. Despite its small size, Samsung has outfitted the device with a QHD+ Dynamic AMOLED 2.0 panel capable of running at 120Hz. It can be purchased with either an Exynos 990 or Snapdragon 865 chipset, and its cameras are also very capable, despite the lower resolution. If you keep a lot of files in your device, you could expand the storage by up to an additional 1TB via MicroSD card. The S20’s only drawback is its price. Fetching a hefty PHP 49,990, it’s the most expensive option of the three.

Despite being outclassed, Mate 30 is still a fantastic phone for the price. It comes with a color-accurate display, powerful chipset, and capable cameras as well. If you want to go all in the Huawei ecosystem, then the Mate 30 is definitely worth getting. The only thing that draws most people away from the device is its lack of Google Mobile Services. Although, there are workarounds, and  Huawei has been refining its own Huawei Mobile Services since the trade ban.

What are your thoughts on the three flagship devices? Which do you like the most? Let us know in the comments below!

my number 1. Huawei 2. Xiaomi 3. OTHERS except Samsung and Iphone