Back in November of last year, Samsung announced that theyâ€™re working on a powerful dual-core SoC intended for high-end tablets called Exynos 5250. After more than half a year, the South Korean company unveils the said SoC and changed its name to Exynos 5 Dual.

It’s a different name but same jaw-dropping features that would make even the current quad-core lineup feel inferior.

The Exynos 5 Dual isnâ€™t your typical dual-core processor; it’s actually the first SoC to make use of and integrate two Cortex-A15 cores with enhanced VFP and Neon coprocessor. Each core of this 32nm HKMG SoC runs at 1.7GHz which is said to have a 40% higher DMPIS (Dhrystone Million Instructions per Second) than its older Cortex-A9 sibling. The speedy processor is paired with a 12.8GB/s memory bandwidth with 2-port 800MHz LPDDR3 for a faster and smoother performance even when performing resource-heavy tasks like 1080p decoding/encoding. Speaking of Full HD decoding/encoding, users will be able to record and watch 1080p clips at a whopping 60fps rate.
3D graphics performance will also receive a major enhancement thanks to its quad-core Mali-T604 and openGL 3.0 (Halti), which was just unveiled a couple of days ago. As you can see on the graph, the performance is more than double than the previous Exynos.

But all of these mentioned improvements are aimed towards the SoC’s main feature which is the ability to display at WQXGA resolution. For the uninitiated, WQXGA or Wide Quad eXtended Graphics Array is a display resolution of 2560 x 1600 with an aspect ratio of 4:3. 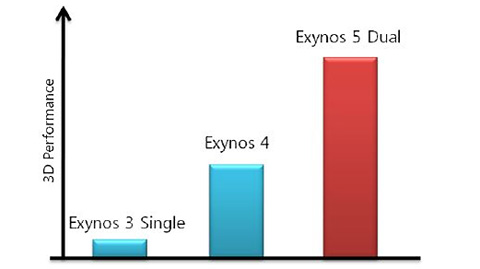 To put it in perspective, imagine a 10.1 tablet (which would likely be the case since the SoC is designed for high-end tablets) with WQXGA resolution, that would equate to a very crisp 298.9ppi easily beating the iPad’s â€œRetina Displayâ€ 264ppi pixel density. And even if the screen is stretched to 13.3â€ just like with Toshiba Regza tablet that we saw at this year’s Computex, the pixel density would still be at 227ppi which is still pretty decent.

Power consumption has always been a main concern when dealing with processors and having a 10-inch or bigger screen, displaying at WQXGA resolution will certainly take a huge chunk of any device’s juice. Samsung addressed this by integrating a low-power eDP Version 1.3 (electronic Display Port) with PSR (Panel Self-Refresh) to the Exynos 5 Dual. The power consumption is dramatically reduced as shown in the graph below. Another notable feature of the Exynos 5 Dual is that it will have SATA III and USB 3.0 DRD functionality, which validates our prediction back in January. Devices that would wield the new dual-core SoC will be able to establish a 5Gbps SuperSpeed connection to a computer for a 10x faster file transfer compared to USB 2.0. The device can also act a Host, thus having a USB 3.0 OTG functionality, support for external input devices like keyboard and can serve as an LTE data modem thanks to its DRD (Dual-Role Device) technology. Samsung also included an Image Signal Processor in the Exynos 5 Dual which would enhance the image quality of the devices. The company also integrated various post processing technologies like 3DNR (3-Dimensional Noise Reduction), VDIS (Video Digital Image Stabilization) and ODC (Optical Distortion Compensation) which puts the icing on the cake.
The Samsung Exynos 5 Dual is certainly a force to be reckoned with in the SoC arena. But instead of an Android tablet, weâ€™re inclined to think that Samsung has come up with this SoC with Windows RT in mind. With the official release date of the Metro-style OS nearing, it wonâ€™t be surprising if this SoC will be the weapon of choice of different manufacturers for their Windows RT devices.

Editor’s Note: We’ll be heading to Berlin, Germany to cover IFA by end of the month and we’re hoping to see a lot of new devices running the Exynos 5 chip. – Yuga