Big screen TVs are all the rage nowadays, from budget options all the way to really expensive OLED TVs. There’s so much difference between a budget TV and a high-end one that you’d be surprised at the difference in performance in picture quality once you go up the ladder. But do these expensive panels deserve your hard earned money? Or will it offer a vastly different experience than a budget TV? Let’s find out with this TV right here, the Samsung 65″ Neo QLED QN800B. 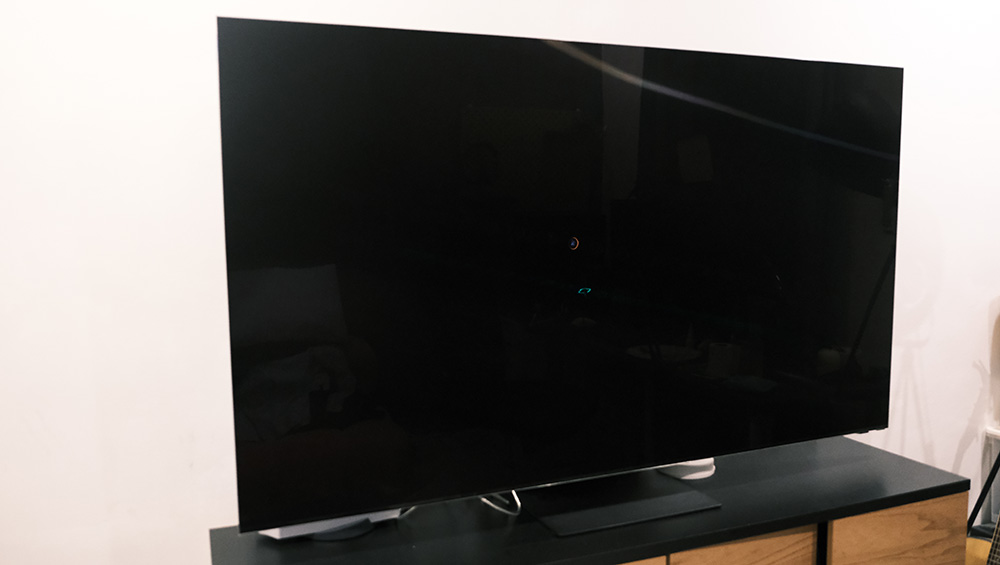 The Samsung QN800B is an 8K TV powered by Samsung’s MiniLED technology. Those words immediately scream premium and using the TV is truly an eye-popping experience. Let’s find out.

The QN800B is quite a stunner, I could argue that it is a piece that people will be talking about when they see it in your living room. Our model features a 65-inch infinity screen design which means that there is little to no visible bezel on the TV. The TV is 0.7-inches thick and is made of metal that looks super sturdy as well. The device also is a bit on the heavy side so make sure you have somebody else helping you when it comes to setting this TV up. 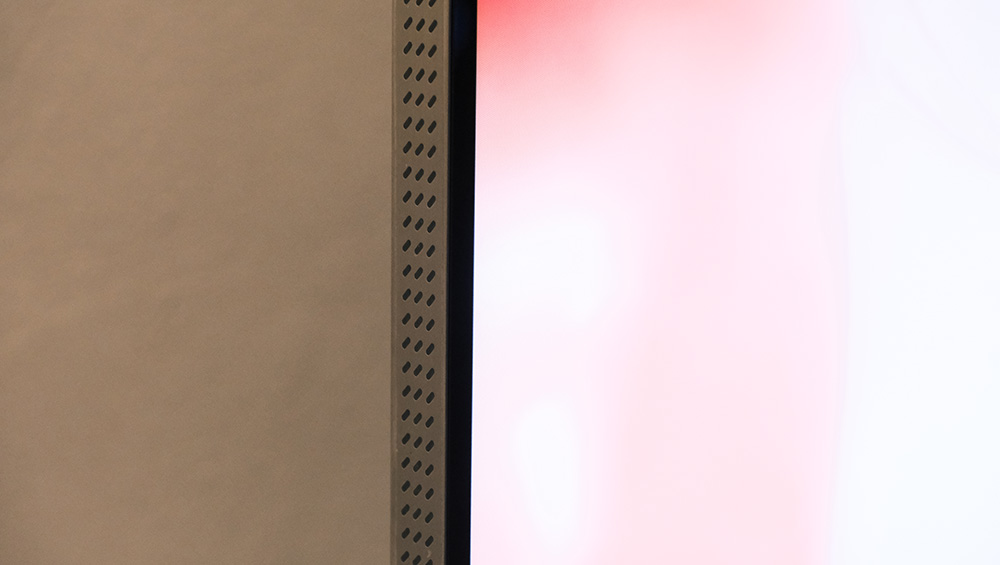 The back of the TV is made of plastic and features eight speakers that provide Dolby Atmos sound which we will get to later. The input for the Samsung One Connect box is also here and the solid metal stand connects here as well. 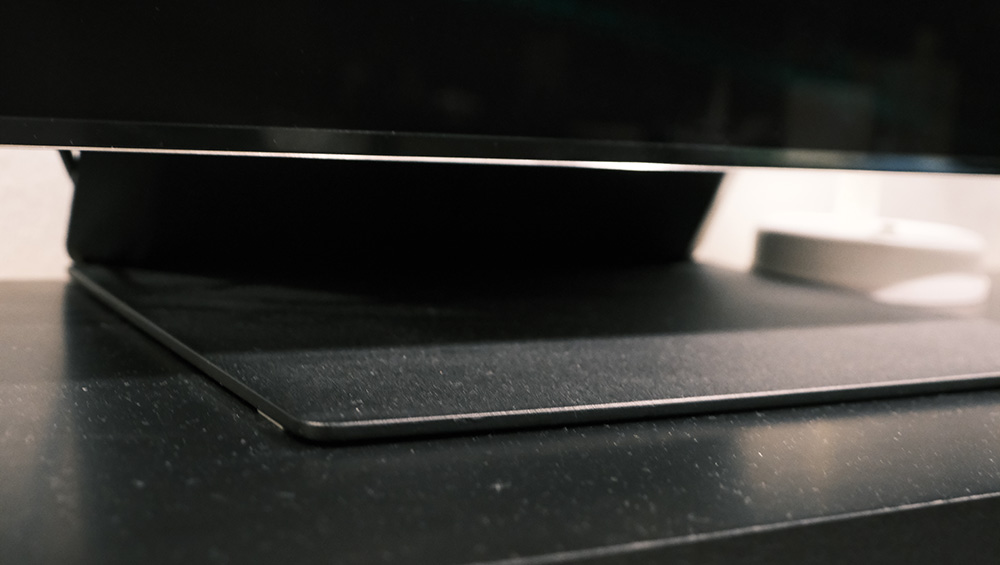 Speaking of the One Connect Box, this is where you will connect all the devices to the TV. It’s quite ingenious as it can stay on the back of the TV on top of the metal stand or separately like a console on your table. It features four HDMI 2.1 ports with eARC/ARC on HDMI3, a CI Slot, one TF, and two satellite slots, digital audio out and a LAN port. 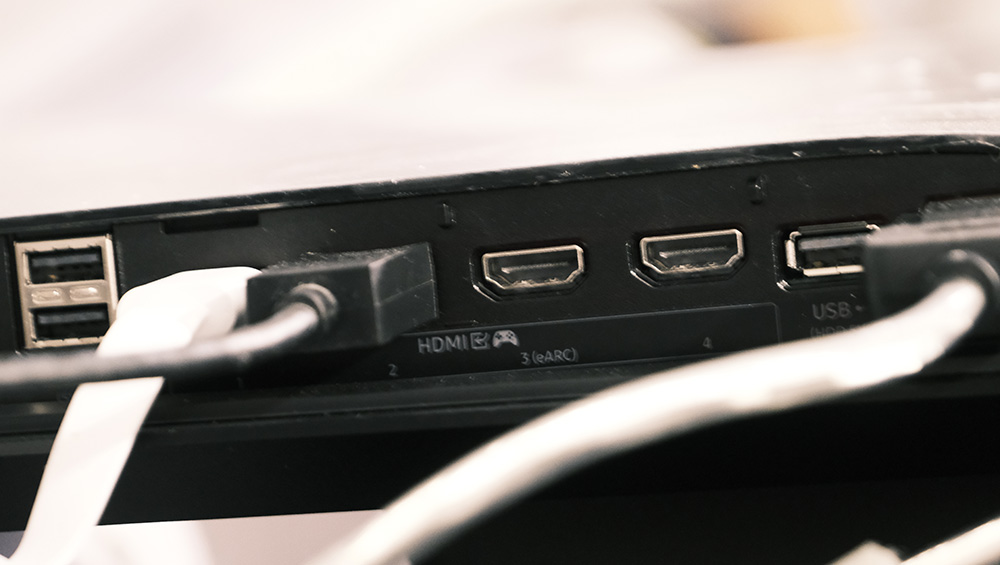 The remote of the QN800B is a very minimalist remote control. It’s a small and sleek remote that feels comfortable to hold. It has most of the features that you would want in a modern day remote. The settings button, voice control, input selection, home button, back button, as well as shortcuts for popular streaming apps such as Netflix, Disney+, and Amazon Prime. 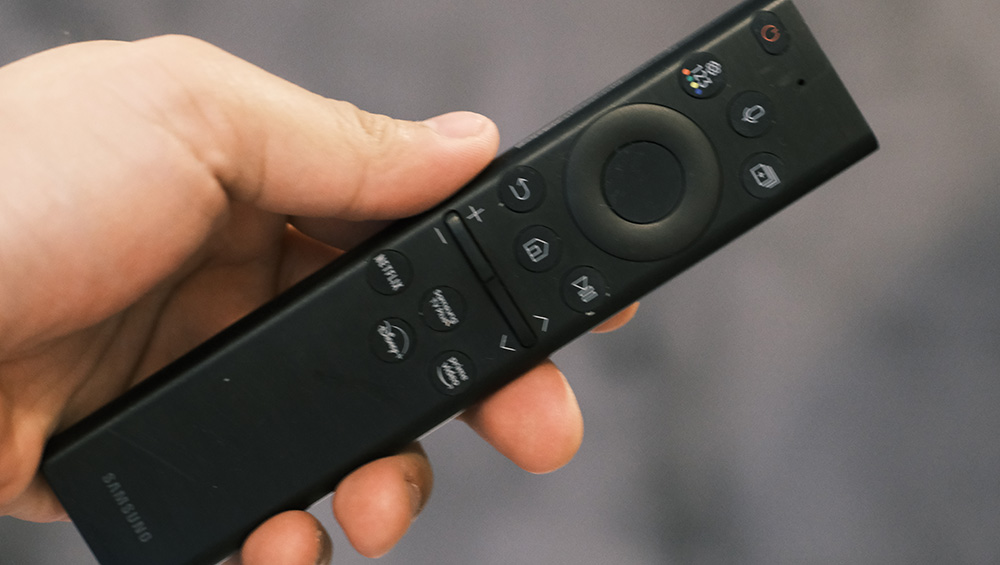 The 8K display on the Samsung QN800B is just something else, the colors really pop out on this device, maybe a bit oversaturated at times but it really gives life to whatever you are watching on screen. This is made possible by Samsung’s Quantum Dot Technology, and the Mini LEDs that power the display on this device. It really improves the detail on the device and enhances the contrast of the device with local dimming. 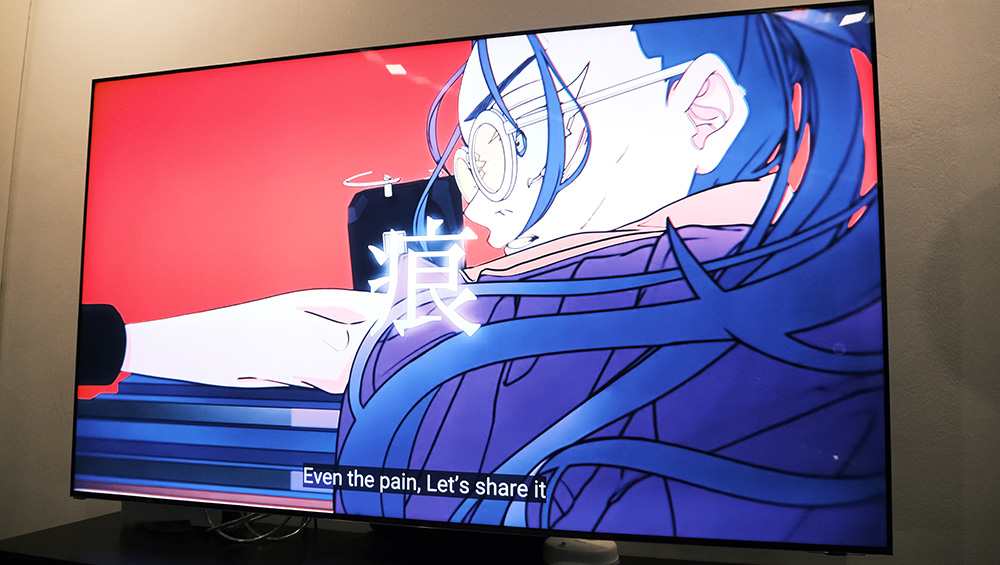 First off, black uniformity with the TV was excellent, with the Mini LEDs I didn’t see any obvious bright edges and clouding. The only issue I’d have would be a bit of blooming on objects. Blooming is when there is a white halo or aura around objects, something that regular people won’t usually see or notice but if you nitpick, it is there. This usually happens when an object is against a dark or black background. There’s some blooming on this TV but it isn’t too obvious and won’t bother you in most cases. Overall, the blacks on this TV are probably half a step behind or even at par with some OLED TVs.

Brightness won’t be an issue here, even against direct sunlight this device goes over 1000nits and gets really bright. If you are going to use this device in a dark room, I suggest lowering that brightness quite a bit. 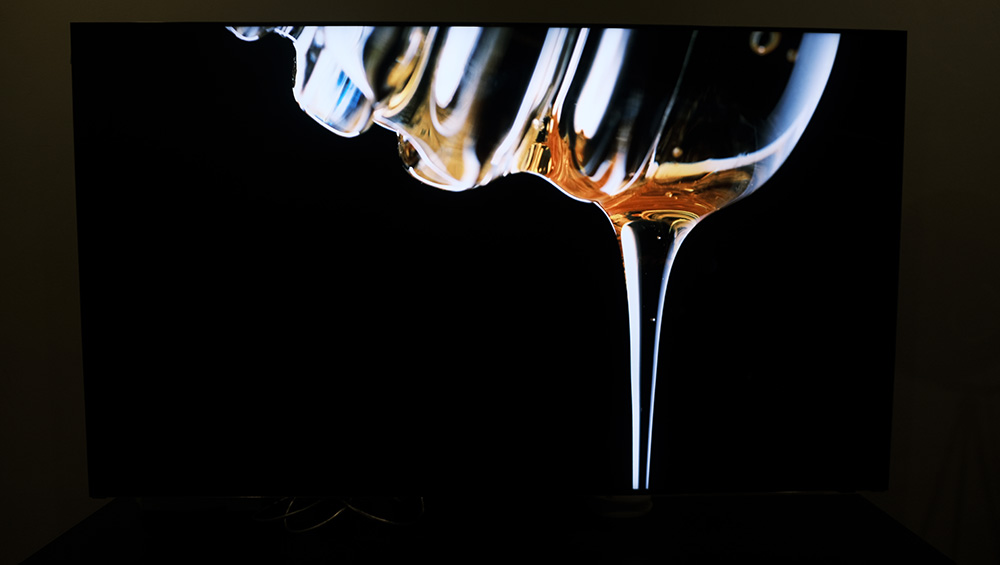 The colors on the TV would also adjust automatically using Samsung’s Smart Adaptive Picture mode that would enhance the colors depending on what you are watching on screen. I watched Lord of the Rings: The Rings of Power on this TV and the colors of the armor of soldiers, the hair of the Harfoots, and the detail on the outfits of the elves all popped out on this TV. I used the highest quality version of the TV show which is 4K and things really just came alive with this TV. 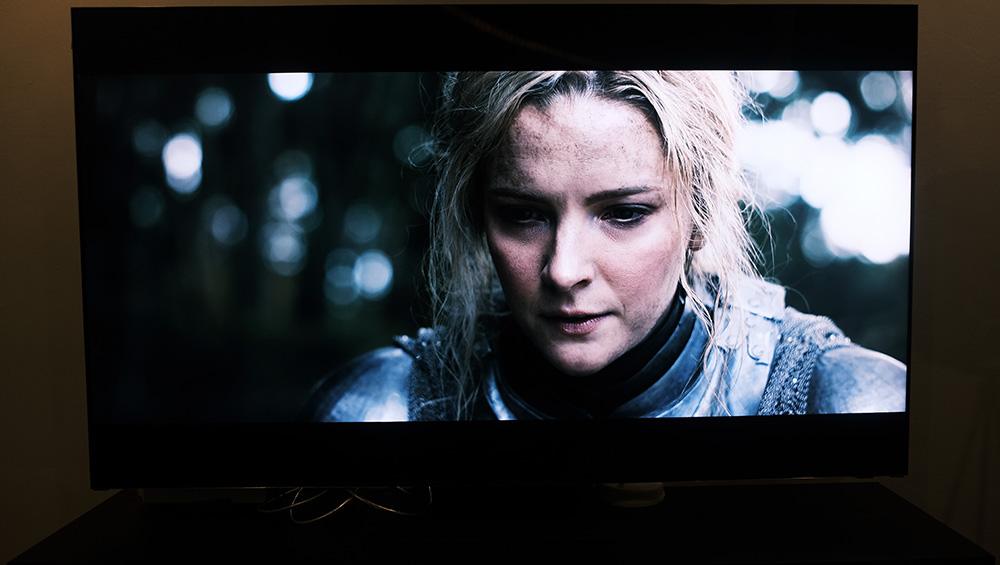 I loaded up Top Gun: Maverick on the TV to test the motion of the device and unsurprisingly it handled all the fast moving objects on screen very well. The jets flew on your screen with little to no blur at all, and the clarity of the picture was just superb. 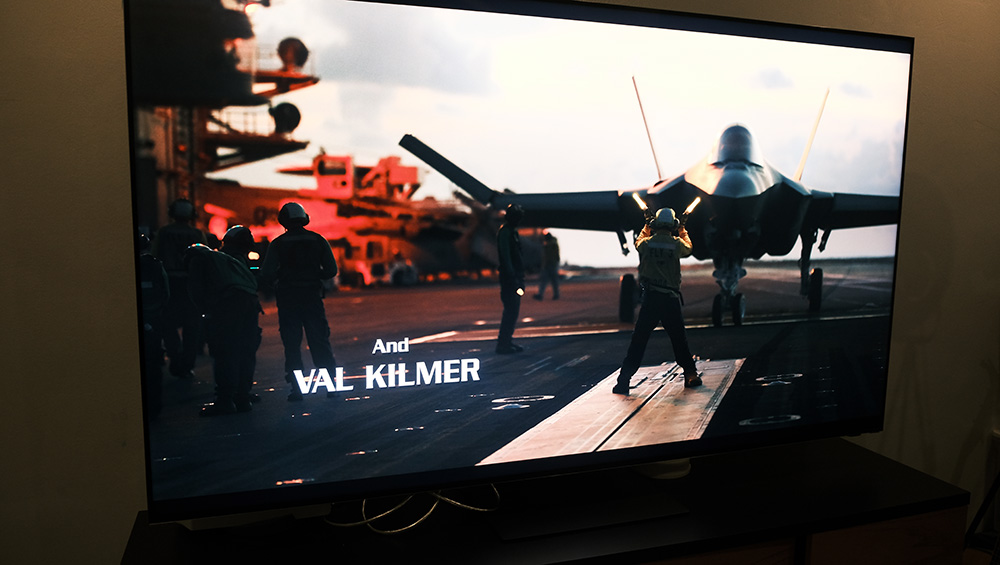 Another thing to note is that this device doesn’t come with Dolby Vision, which is HDR technology that allows users to see a movie or series the way the director or creator intended it to be shown. Other TVs with Dolby Vision automatically switch to this when they detect a Dolby Vision capable movie on Netflix for example. This enhances the picture quality quite a lot in my opinion. Not that watching movies on Filmmaker Mode for example was bad, but for the price you are paying for, this TV should come with Dolby Vision. 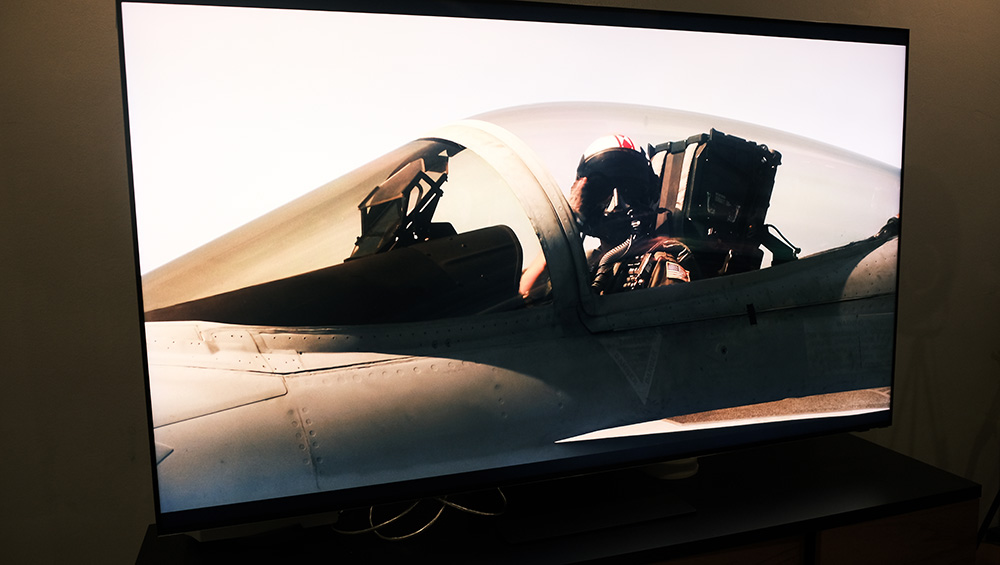 Picture quality during gaming was also immersive. The QN800B has a 120Hz refresh rate so it’s future proof for current gen consoles such as the PS5. Hooking up a PS5 on this device and playing a game like NBA 2K23 was a great experience, motion was fluid and the picture quality on screen made you feel like you were watching a live game. Marvel’s Spider-Man was also a great experience on this TV as the color of Spidey’s suits really popped out on screen and the Manhattan skyline looked super alive on the TV. There was no problem with input lag as well because the TV automatically detects that you are playing a game and switches on the gaming features with lower input lag and selects the best picture profile for gaming. 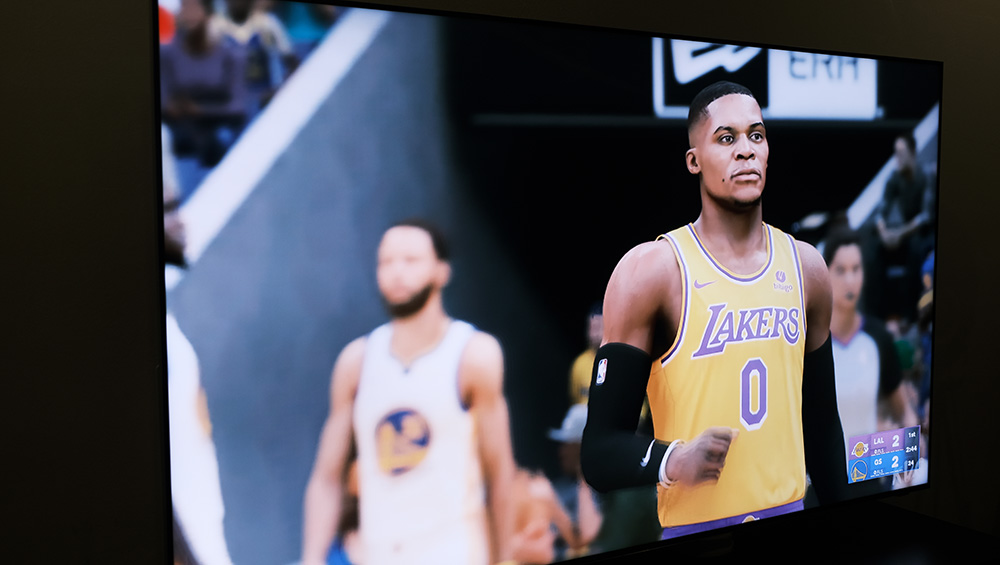 Upscaling was also handled very well, even watching 720P videos on the TV was no problem as the TV was able to bring up the quality of the video. Though sadly, 8K content was hard to come by, there would be a selection of 8K quality video on YouTube but other than that, most streaming platforms don’t offer 8K quality. 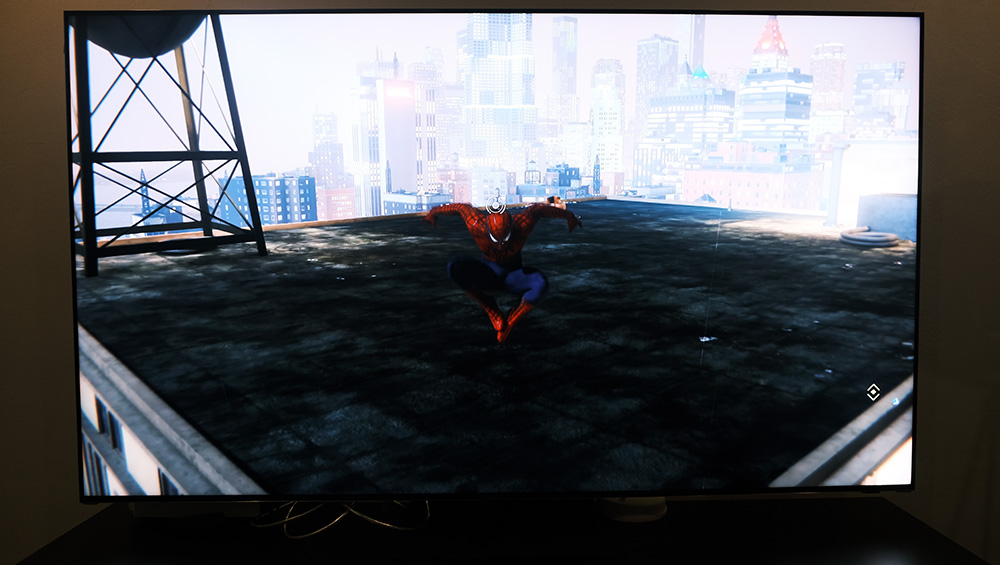 This might be the only downside I have with this device. The QN800B comes with their proprietary OS which is Tizen, which at first glance, is very intuitive. Don’t get me wrong, the OS runs smoothly and fast so you won’t have any issues with your apps but it’s just a bit limited to my tastes. Yes, you have the big apps to choose from such as Netflix, Amazon Prime, etc, but just going around the UI was a bit of a learning curve for me to say the least. 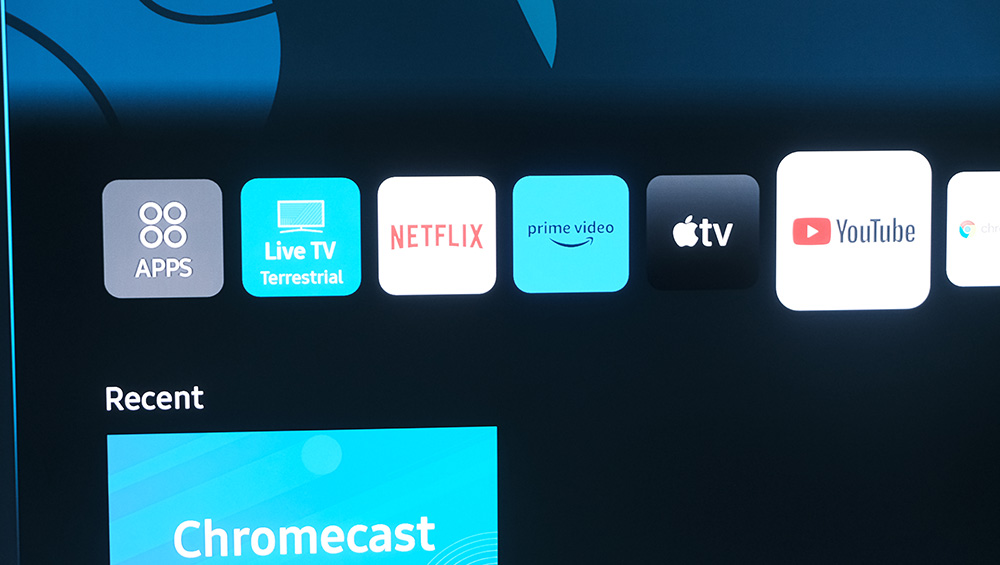 I have a Network Attached Storage or NAS at home and to get access to my NAS, I have to go through a couple of options just to find the connected inputs for my device, which is a bit weird for me. It would detect my PS5 automatically when I turn the TV on, which may be good, but sometimes I just want to watch Netflix or YouTube, so I have to exit away from the PS5 first, which by the way it turns on automatically for some reason. 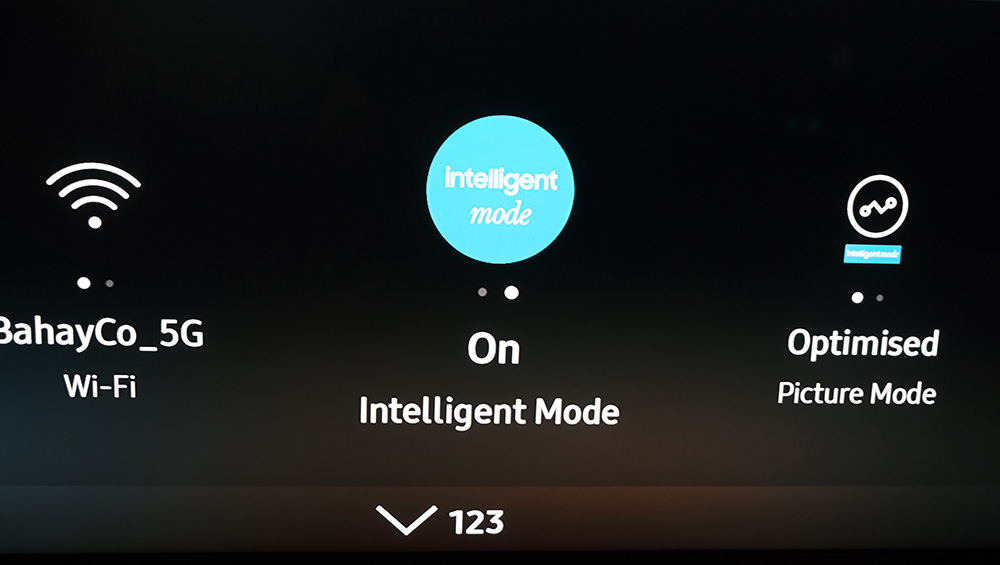 Lastly, the options to customize your picture profiles, sound profiles are buried in a menu system that is a bit behind the competition in my opinion. Other devices running Google TV that I’ve tried are much more intuitive and easy to use compared to the Tizen OS that’s used here. 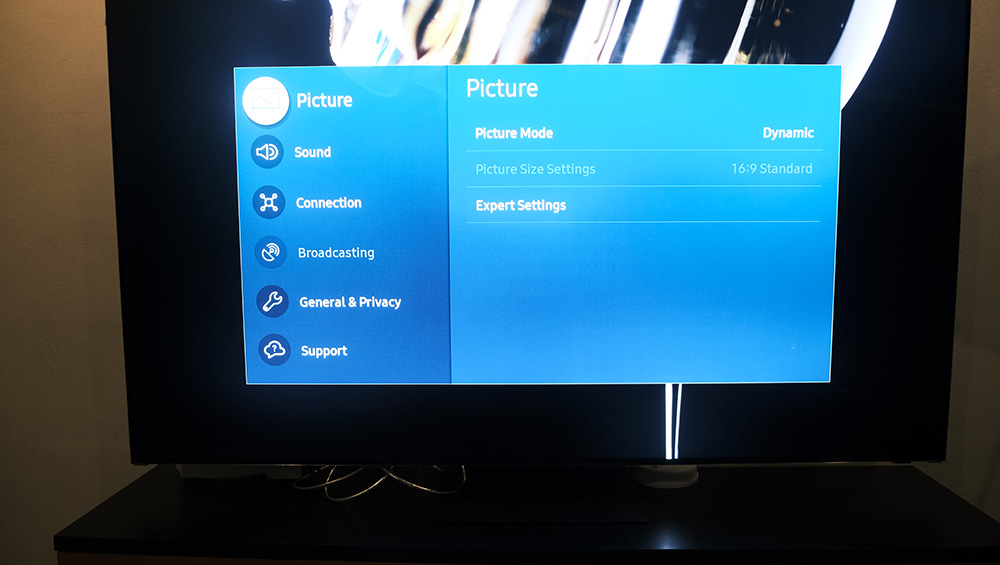 Now let’s get to some more good stuff. There are 8 speakers at the back of the Samsung QN800B and boy do they bring some punch. These speakers probably are equivalent to a decent soundbar as they provide clear treble and a little bit of bass. 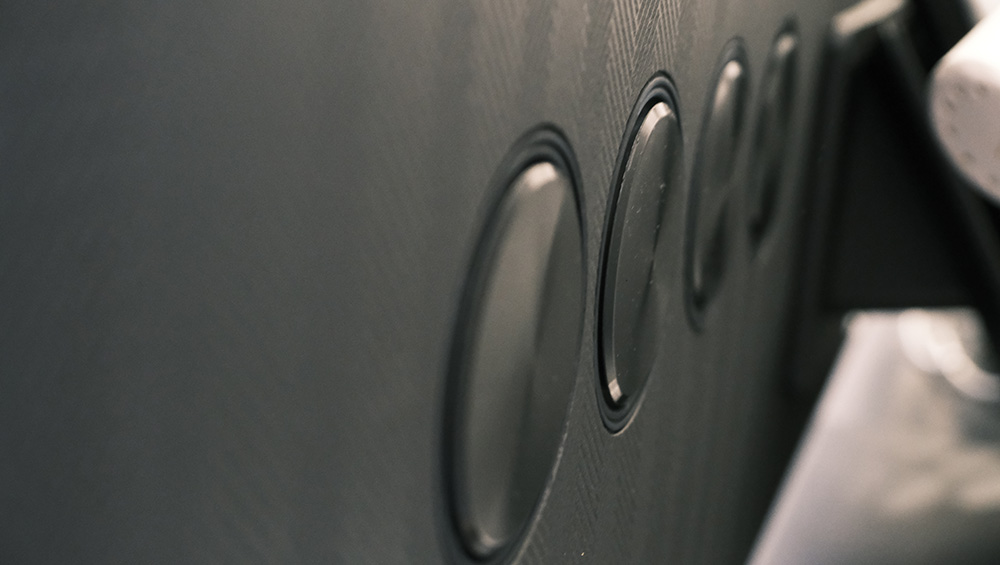 Vocals, in my opinion, is where this sound system shines. Whatever I watch on this TV, whether it be a movie with a lot of noise, vocals would always be clear to me. This was such a surprise to me as even some soundbars fail to give you a clear vocal experience. The QN800B features Dolby Atmos which simulates surround sound all over you. I’d say in the small room I was testing this feature, it did pretty well for built-in speakers! For bassheads out there, there is a decent amount of bass, just enough in my opinion to give that oomph to whatever you are watching on the TV. Don’t expect room shaking bass on the QN800B. 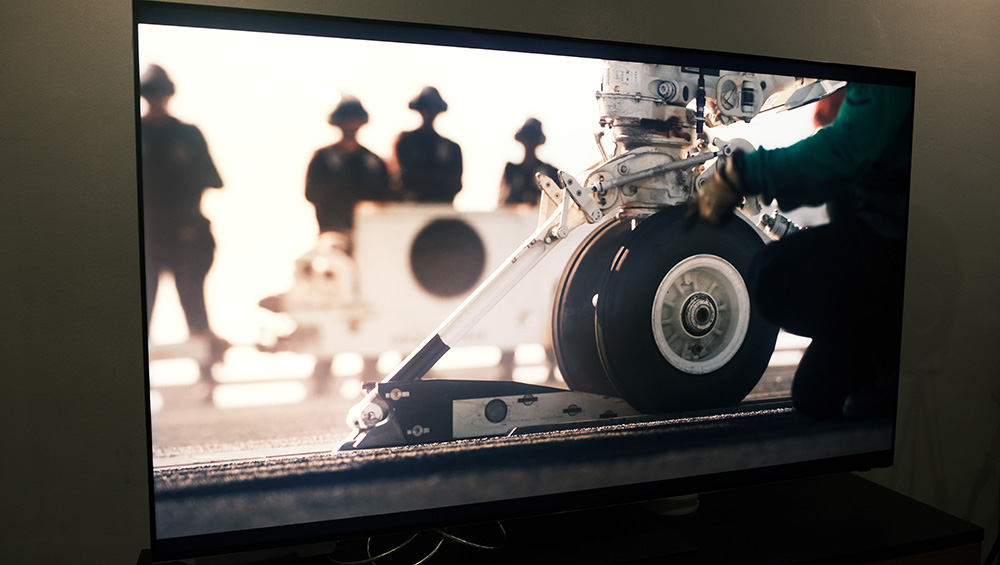 The Samsung QN800B is an expensive TV to say the least as Samsung has unveiled to us what TVs should be in the future. It’s as if purchasing this TV is buying into the future. 8K, MiniLED, 120Hz refresh rate, that results in a TV that is just straight futuristic. The only downside would be the OS which I think should be a tad bit more user friendly rather than aesthetic. The Samsung QN800B is tough to beat, but for its price, I’d argue that customers should go for an OLED TV. But that’s a different comparison on its own. For now though, with its amazing picture quality, excellent sound, and of course expensive price, at PHP 224,999, the Samsung 65″ Neo QLED QN800B is in a class of its own. 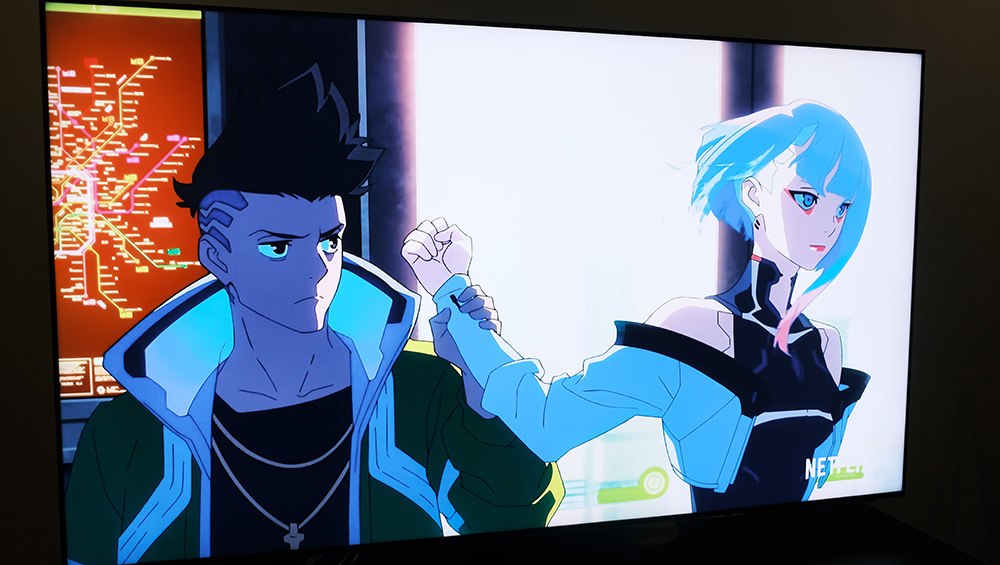