Amazon has just made official its television set-top box Fire TV that’s set to battle the likes of Apple TV and Chromecast. This small box not only lets you stream movies, shows, and music, but it also acts as a console to play games in. 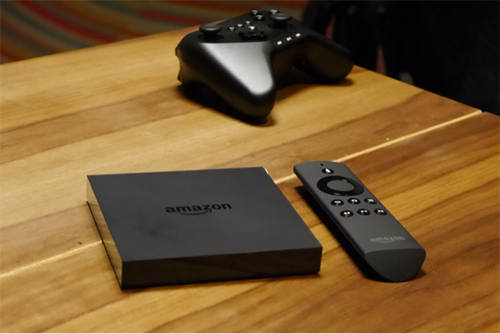 The company claims that it delivers high-quality and fast performance that eliminates lags which people today are experiencing from most streaming boxes. Users may stream videos from Amazon, Hulu, ESPN, Netflix, and other sources as well.

The Fire TV comes with a remote control with built-in microphone for voice search. According to the company, this is to address the cumbersome process of endlessly clicking the remote to navigate and look for media.

As mentioned earlier, it doesn’t only deliver videos and music to you. It also doubles as an interactive gaming console since Amazon’s got its own studio for developing games. In addition to their own titles, gaming companies like EA, Disney, and Gameloft also have their own games in the Fire TV. These games can be played using the included remote control or thru phones and tablets by using the Fire TV app. If you want a legit gaming feel, there’s also the $40 Fire Game controller waiting for you.

Business Insider, being present at the launch describes it, “On stage, Fire TV looked impressive. It’s nothing revolutionary, but it seems to do what everyone else is doing, just better.”

The Amazon Fire TV is available for $99 and ships immediately.

Sana, pero Tier-3 country tayo. Imagine using the “IWantTV” app in a PS4 or a XBOX One console to watch classical Pinoy Shows or Movies (wishful thinking)… Yugatech should also do reviews of other tech such as TV’s/Smart TV’s, Media player’s, & Blu-Ray/DVD combo players.