A fleet of 10,000 Foxbots will aid in production of iPhone 6

A fleet of 10,000 Foxbots will aid in production of iPhone 6

Foxconn, one of the biggest partners of Apple in manufacturing its devices, announces that it will slowly veer away from using manual labor and instead make use of robots or “Foxbots” as they call it to help in the assembly of the iPhone 6. 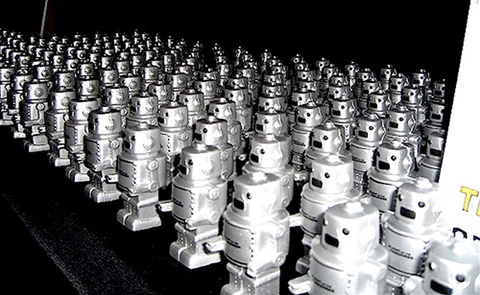 Foxconn CEO Terry Gou mentioned at a recent shareholder meeting that the robots cost about $25,000 to make, but will in turn produce an average of 30,000 devices per year. The initial rollout of these Foxbots is expected to reach 10,000, in which Apple will be the first company to try them out. As of now the robots are in their final stages of testing and would soon be ready for deployment.

This doesn’t mean that the next Apple devices will be made entirely by the Foxbots since the company just hired 100,000 additional workers last month to prepare for the high demand in production.

The move to have this much hands (both from humans and robots) working on the next iPhone is so that mishaps from before won’t happen again. Back when iPhone 5 was released there were reports of damaged phones right out of the box and it was believed that they were due to the rushed production. Apple seems to have learned its lesson and they aim to be prepared this time around.

Production of the iPhone 6 is expected to be in full blast starting next month in time for an earlier-than-expected September launch.