A month after the release of Huawei’s latest entry-level phone, the Y6s, they released its bigger brother, the Y9s. It sports a full view display thanks to its pop up camera, a Kirin 710F chipset, triple rear cameras, and a 4,000mAh battery. Today, we’ll be checking out how we’re going to take it out for a spin to see if this is the next phone for you.

Starting with the front, the Huawei Y9s has a massive 6.59-inch FullView IPS display. The top and side bezels are almost nonexistent, measuring only 3mm while the chin is double in thickness, measuring 6mm. 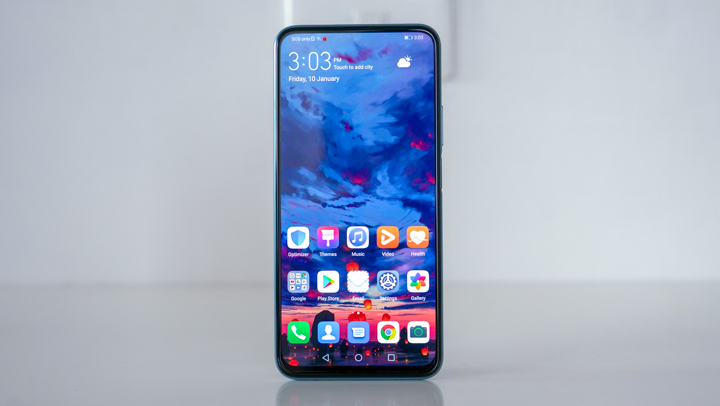 The back is covered by a curved glass body that feels premium to the touch. Since it’s glass, there’s a tendency for it to slip and slide. The material is also a fingerprint magnet. 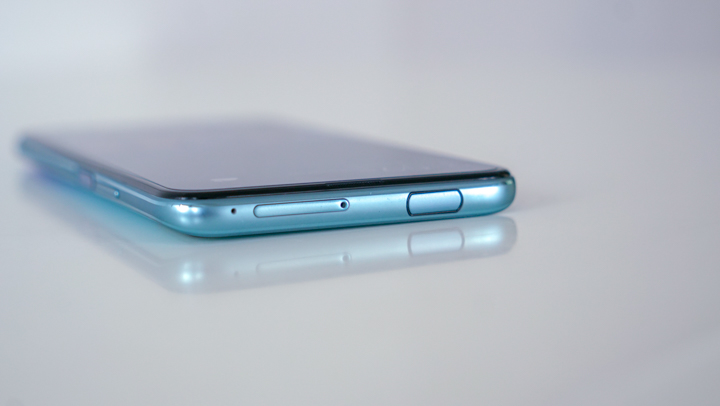 Connecting the front and back of the phone is an aluminum frame. At the top sits the 16MP pop-up camera and SIM tray. 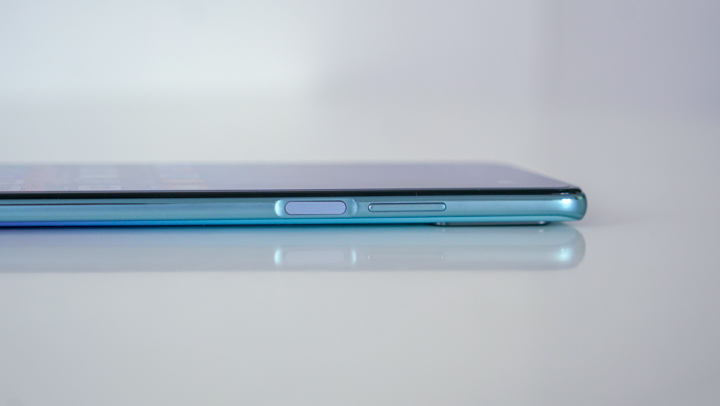 Situated on the right are the volume rocker and power button, which is also the fingerprint reader. The placement is just right for my medium-sized hands as it sits exactly where my thumb rests naturally. The left side of the device is bare, with no buttons and design. At the bottom sits a 3.5mm audio jack, USB Type-C port, and a single down-firing speaker.

Overall, we like the design of the Huawei Y9s, especially in the Breathing Crystal colorway. The device feels sturdy and premium while being comfortable as well, thanks to its curved back. As a word of caution, though, it’s hard to use the device with just one hand due to its wide body.

The Huawei Y9s has a 6.59-inch FullView display with a resolution of 3240 x 1080. Images and videos are detailed, and we were not able to make out individual pixels no matter how close we looked at the screen. Colors were vibrant, the contrast was good enough, and viewing angles were great thanks to its IPS display. 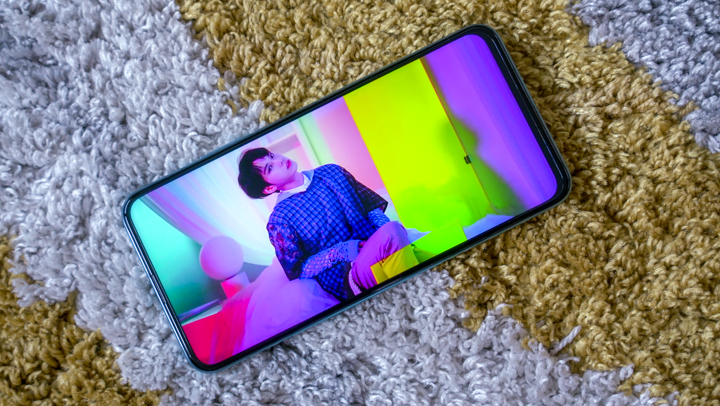 As for the audio, a single down-firing speaker can get loud enough to fill an entire room. The highs and mids were great, considering it’s coming from a phone, though the bass is lacking. Once you turn up the volume, though, the highs lose its clarity, and the bass is almost nonexistent.

Out of the box, the Huawei Y9s comes with EMUI 9.1 based on Android 9 Pie. It does come with Google apps pre-installed as well as other third-party apps such as Netflix, Camera 360, Agoda, and Booking.com. Huawei also included its stock apps such as HiCare and the Huawei App Gallery. As for feature software, it comes with a Recorder, weather app, FM Radio, Phone Clone, SIM Toolkit, and a Party Tool app that allows you to sync music playback across phones on the same WiFi network. The Huawei Y9s comes with 128GB of storage and has micro SD support for up to 512GB. Unfortunately, the micro SD card slot is shared with the second Nano-SIM, so you have to choose which you prefer to have.

Moving on to the rear cameras, the Huawei Y9s is equipped with a 48MP primary camera, an 8MP ultra-wide-angle camera, and a 2MP depth sensor. They’re capable of producing photos with enough sharpness and detail. However, they lack in contrast, and the colors appear to be muted. Wide angled shots do provide a boost in saturation, though the colors are still lacking.


As for the front camera, the 16MP shooter was able to capture small detail like hair, though the colors are still washed out. Photos appear overexposed as well. The areas where the light touches the subject’s face appear overly bright, if not outright white, and the shadows produced are too dim. Overall, they’re decent enough for social media posts, though people who take photography seriously may want to look somewhere else.

The Huawei Y9s can shoot videos up to 1080p at 30 fps. Stabilization is decent while walking, though colors appear washed out despite shooting in daylight. Check out the sample video below:

The Huawei Y9s his equipped with a Kirin 710F processor, paired with 6GB RAM and 128GB storage. We ran the device under several benchmarks and yielded the following results: 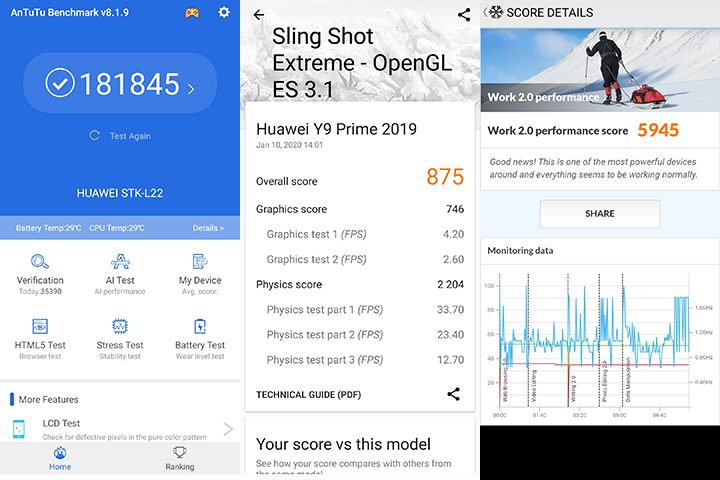 Using the phone for social media, news reading, emails, and other basic tasks was a breeze, and we didn’t notice any slowdowns or stuttering. While playing Call of Duty Mobile, we were able to get stable playable framerates on the Nuketown map on the classic deathmatch mode. However, graphics were set to the low with all the sliders turned off, and we could only go as high as “medium” on the frame rate setting. On Mobile Legends, however, the Y9s was able to run the game on high graphics with both HD, and HFR mode turned on.

The Huawei Y9s comes with all the usual connectivity and network features such as WiFi, Bluetooth 4.2, 4G LTE, and GPS. We had no issues pinning our location on Grab, and Google Maps was accurate as well. While the Y9s can accommodate two nano SIMs, one slot is a hybrid and shares slots with the Micro SD card. 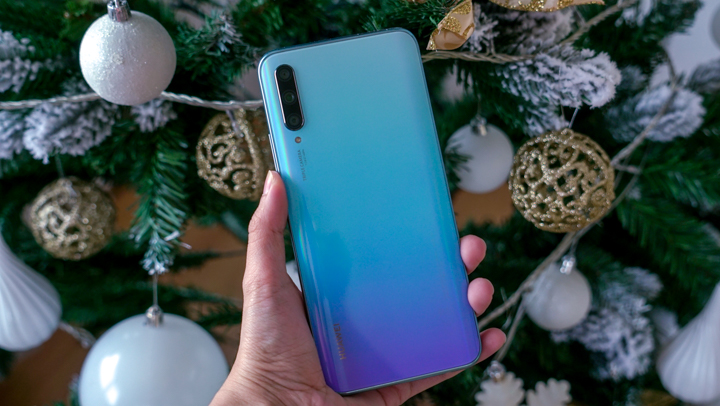 The Huawei Y9s is powered by a 4,000mAh capacity. We ran the Huawei Y9s through PCMark’s battery benchmark and our standard battery loop test, which consists of playing a 1080p video at 50% brightness, 50% volume with the headphones plugged in, and airplane mode turned on. In PCMark, the Huawei Y9s was able to last 12 hours and 6 minutes, and it lasted 15 hours and 45 minutes on our video loop test. These are decent results but we’re expecting higher numbers given its class. 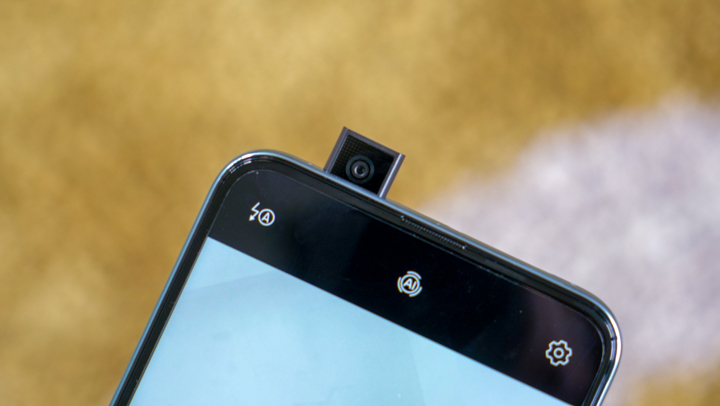 While games were playable, and productivity, social media, and simple tasks were smooth, other phones in this price range outclass the Huawei Y9s in raw performance. If you’re a hardcore gamer who’s competitive, you may want to look elsewhere. That being said, if you’re looking for a phone that looks amazing, has an immersive display, a premium body, and okay cameras, then the Huawei Y9s ticks all those boxes for PHP 13,990.