Apart from their famous ROG gaming line and their premium Zenbook line, ASUS actually has a budget notebook line dubbed the VivoBook series. These notebooks were made specifically for those on a budget who still wants a well-built and respectable device. What we’re looking at here is one of the company’s topline Vivobooks, the Vivobook X405UQ. We took it for a little spin and here are our first impressions. 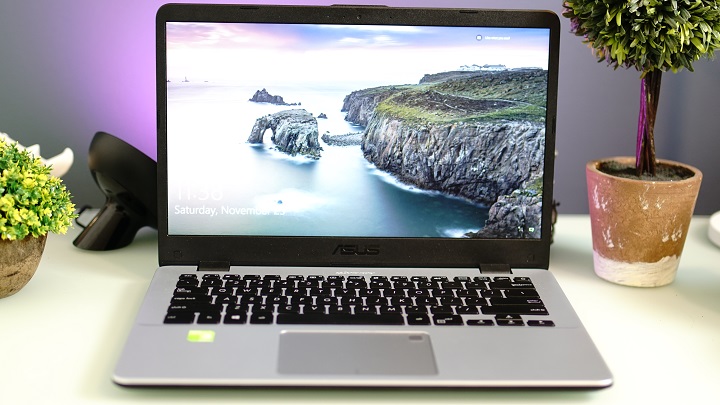 The VivoBook X405UQ has a 14-inch Full HD IPS Display with the company’s so-called NanoEdge display giving it a screen to body ratio of about 78%, which is quite good for a laptop. Another thing to take note is that the device’s panel is 13-inches. ASUS did quite a good job of cramming a display that’s an inch wider. This also gives users the illusion that they’re using a bigger device. In any case, the display is not just all about the thin bezels, it also has good color reproduction, accuracy, and viewing angles.

Audio is average at best, it can go loud at max volumes but clarity gets sacrificed. Mids and highs are present but lacks quality and lows are virtually non-existent. We recommend you get yourself some speakers or a headset to have a better audio experience. 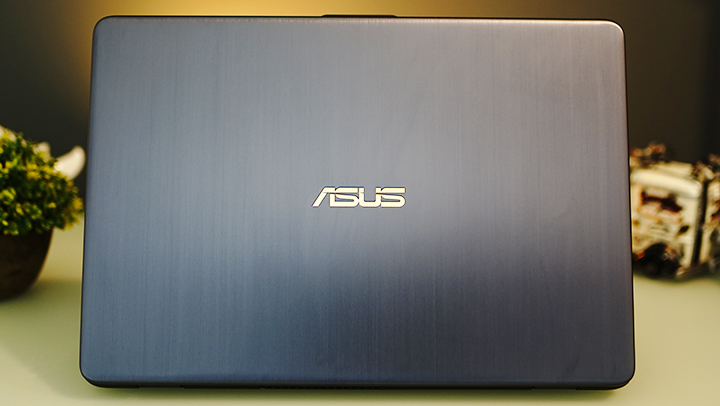 The device dons the familiar design of its notebook line — a brushed aluminum look and finish inside and out, except for the keyboard section and bottom panel. The unit we have uses ASUS’ signature silver and blue color scheme. It has a simple overall design, perhaps too simple though as the notebook might look bland and unappealing to some. Nevertheless, it feels well-built as there is little screen flex and the hinges are solid. Another plus is that the notebook is lightweight and has a fairly small footprint thanks to its slim profile and small bezels. 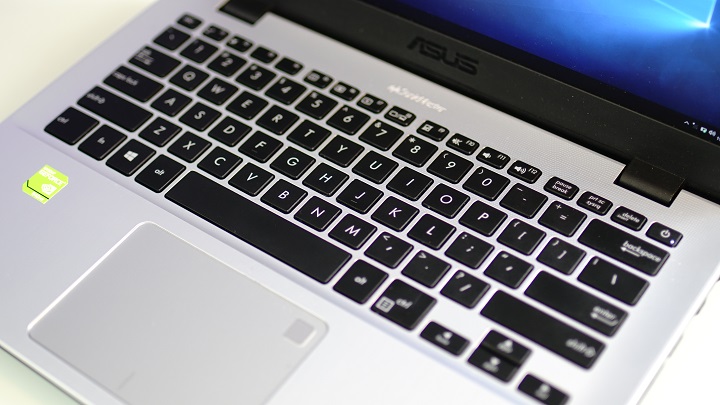 The X405UQ’s keyboard uses a standard layout minus the numpad. The arrow keys are thinner than normal though, which may cause some users to accidentally press the wrong key at times. Either way, the keyboard has good travel distance and the keys feel tactile enough to provide a good typing experience. The trackpad feels good and the surface is quite smooth, making gestures and commands easy. It has two capacitive buttons at the bottom that are both clicky and responsive.

The trackpad also comes with a fingerprint scanner that is paired with Windows Hello. We encountered a few minor hiccups when using it but it gets the job done. 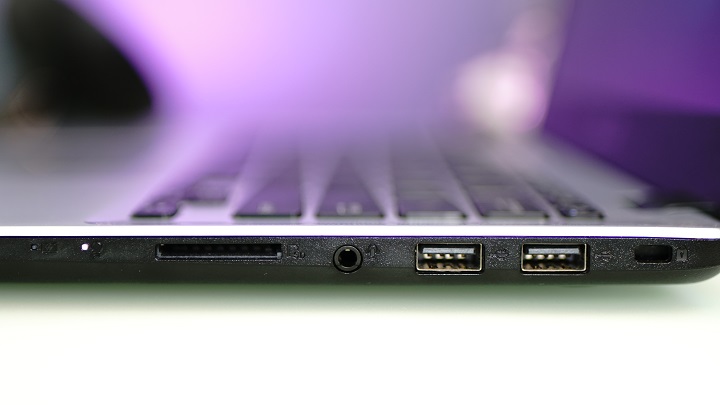 Moving on to I/O, on the right side we have a Kensington lock, a 2x USB 2.0 ports, a 3.5mm headphone and microphone combo port, a card reader, and some notification LEDs.

On the other side, you’ll find the power input, Ethernet port, HDMI port, USB 3.0 port, and the USB 3.1 Gen1 Type-C port. At the back of the device is a single exhaust vent. We have to give props to ASUS for equipping the notebook with a Type-C port even if it’s not Thunderbolt supported. 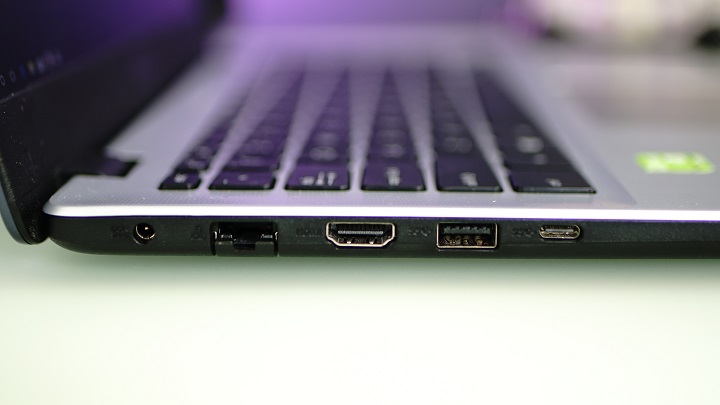 We were provided with a review unit X405UQ which is why it is powered by Intel’s 7th gen i7-7500U processor, Nvidia’s GTX 940mx GPU, a 512GB SSD, a 2TB HDD and 16GB of RAM. Although consumer variants would have either a 7th gen i5 or i7, Nvidia’s GTX 940mx GPU, up to 1TB HDD, up to 8GB RAM which would, theoretically, be slower than the unit we tested. As for performance, mundane operations like web browsing, video streaming, and light office work were fast and smooth and launching programs was quick and easy thanks to the included SSD. Load times would, of course, be slower for the consumer variants due to its HDD configuration but normal operations should be identical since the CPU and GPU would remain the same. 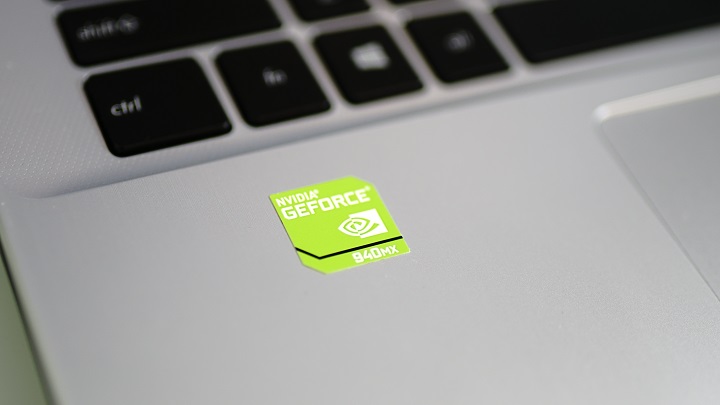 Moving forward, the notebook also handled our multiple Google Chrome browser tab operation quite well thanks to the 16GB RAM. Users are to expect some hiccups when using the lower 8GB RAM consumer variant. Then again, that would only happen if you stress the system with too many tabs or multiple programs as 8GB is still ample enough for heavy multi-tasking. We’ll put the device through heavier workloads like gaming and video and photo editing in the coming days to fully test its internals so stay tuned for our full review. 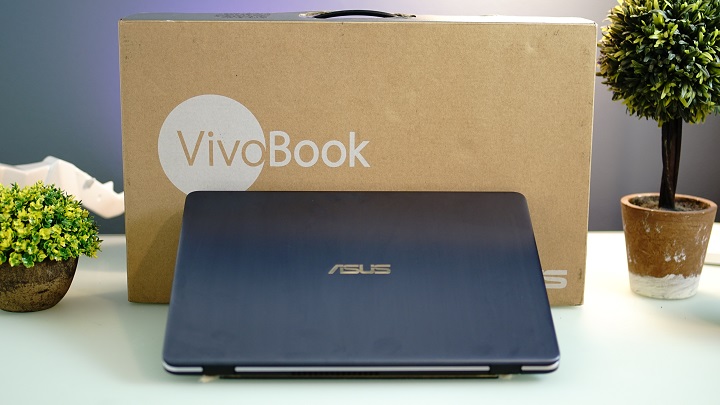 Overall we were quite pleased with our initial tango with the VivoBook X405UQ. Underneath that unassuming design and color scheme is a quite speedy and good performing laptop. If only ASUS would offer this choice of internals for consumer variants, then this would’ve been one hell of a steal for the price. Well, at least users would still be able to take advantage of that USB Type-C port. However, it is a hard sell for an asking price of Php 49,995 for the top specced i7 variant, unless you are looking for an ultrabook with a bit of oomph then this unit might be worth considering.

Be warned, though, competitors at this price range have ultrabook offerings that are slimmer and more elegant, including ASUS’ very own ZenBook line. If you are a gamer or a photo and video editor, then this is not for you as there are other choices in this price range that provide better performance.

The ASUS X405UQ is priced at Php 49,995 for the i7 variant and Php 39,995 for the i5. The notebook is available at ASUS authorized retailers nationwide.