realme has been one of the top brands when it comes to providing bang-for-your-buck smartphones. They sure know how to meet their consumer’s needs. This time, for their sub-brand narzo, realme is adding another budget smartphone, the narzo 30A. And it’s now available locally, however, it is a Lazada exclusive so you won’t find it anywhere else even in official retail stores, it only retails through realme’s official flagship store on Lazada. 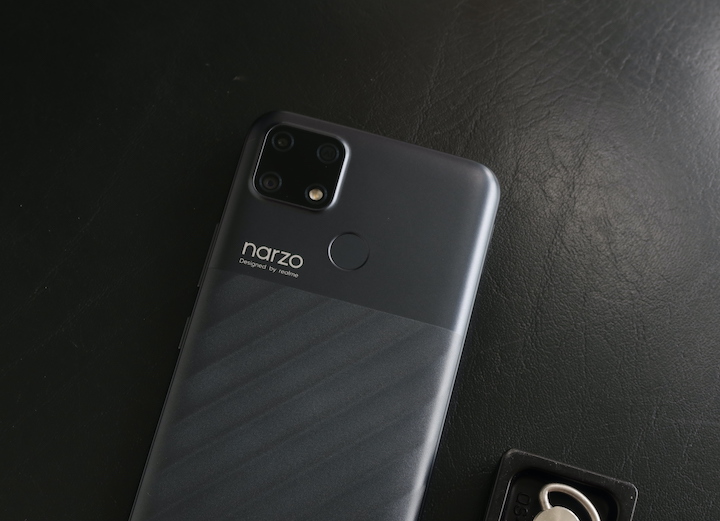 The realme narzo 30A’s features a high-quality polycarbonate back with a cool diagonal stripe textured pattern design. We like how this style doesn’t attract many fingerprint smudges.

Similar to last year’s narzo 20, we get a square camera module on the upper left, the rear fingerprint scanner on the upper middle, and some realme narzo branding. The unit we have is in the Laser Black colorway but it’s also available in Laser Blue if you’re interested. 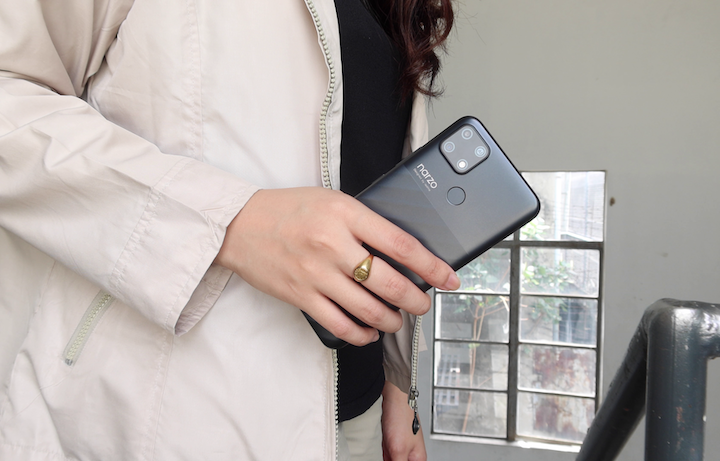 There’s heft when holding the narzo 30A due to its massive battery capacity, but it didn’t really bother us that much even when using it for long periods of time.

Flipping to its front, we get a 6.5-inch HD+ IPS display with a mini-drop notch to house its front camera, and above that is its front-firing speaker. 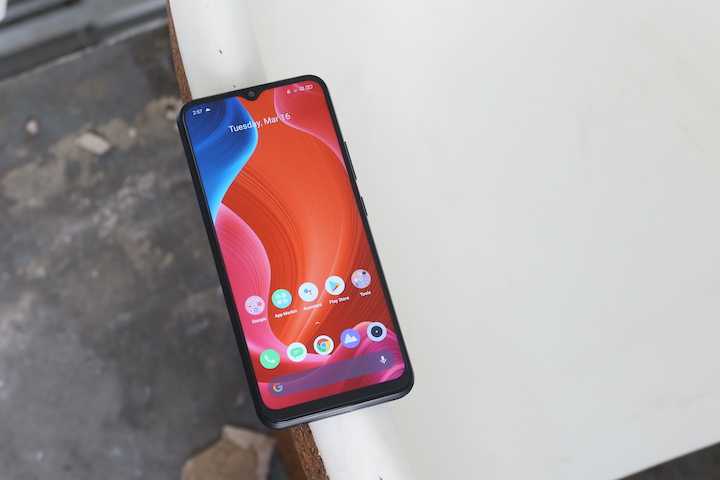 On the right side, there’s the power button and volume rocker that are both easy to reach. 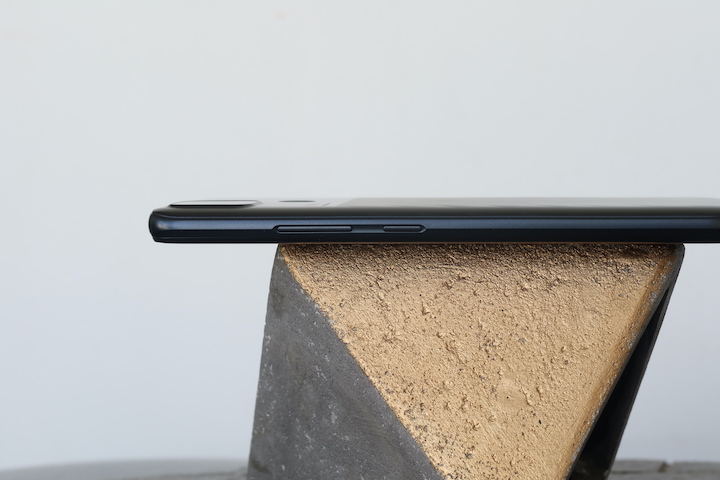 While on the left are its dual-nano SIM tray with a dedicated microSD card slot that can accommodate up to 256GB. 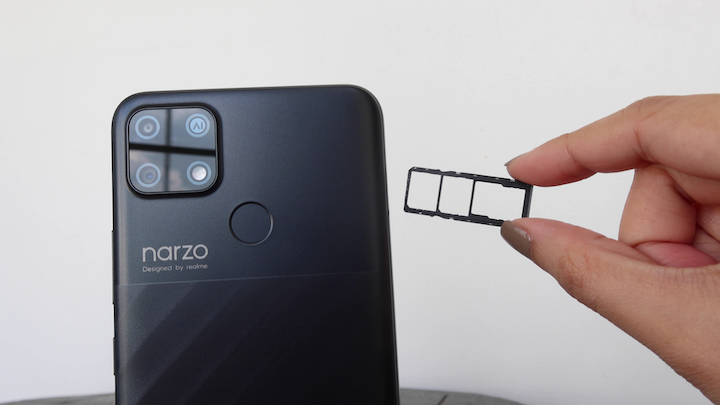 Nothing can be found on the top, while placed at the bottom are its loudspeaker, USB Type-C port, primary microphone, and yes, a 3.5mm headphone jack. 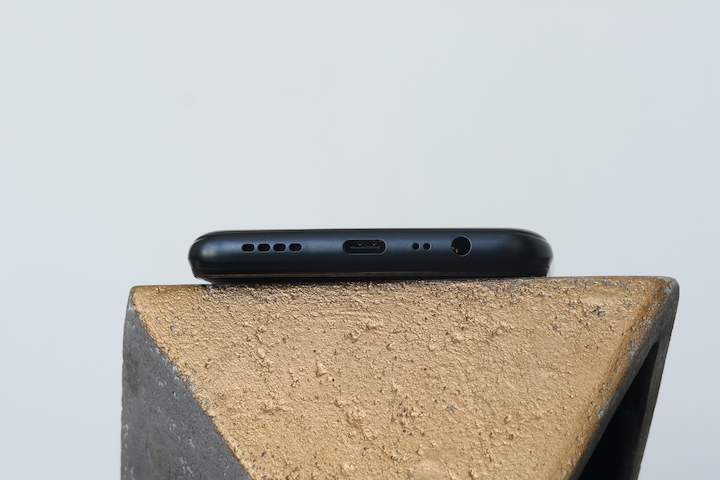 Overall, the design and build are a lot similar to the narzo 20, but we do appreciate the new rugged look with the additional pattern style and having it in Laser Black makes it look classic. 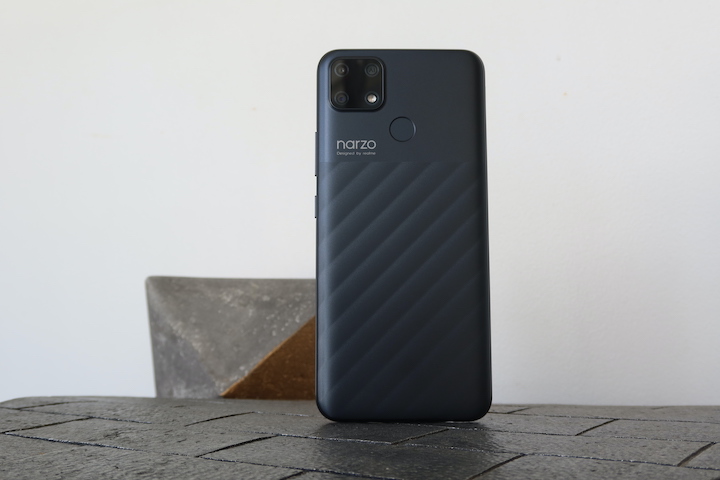 We basically get the same 6.5-inch HD+ IPS screen as the realme narzo 20. They could have improved the display, but hey, they need to keep the price low. So specifically we get a resolution of 1600 x 720px with 270ppi, plus it has a peak brightness of 570 nits. 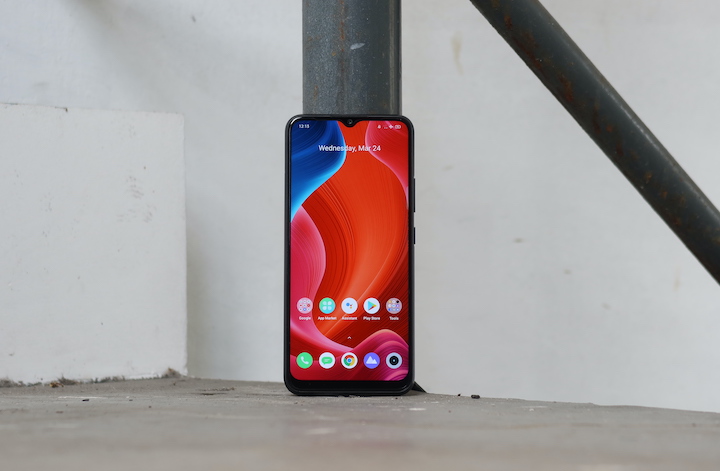 The display quality is pretty good, we still get vibrant and accurate colors with decent viewing angles. It should be enough for casual media consumption. Under direct sunlight, you can still see the display clearly when setting the brightness level to maximum. 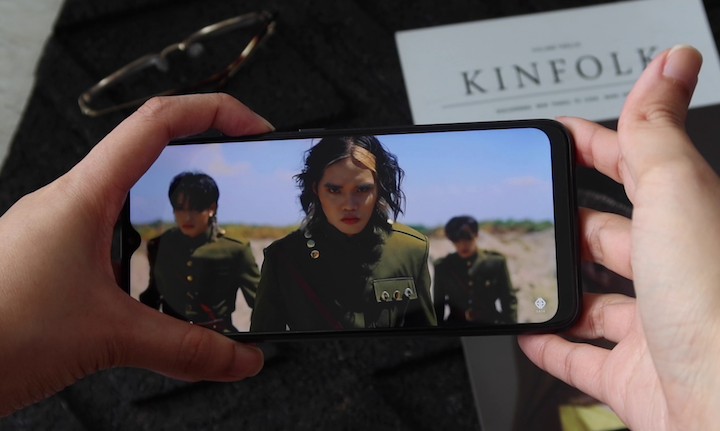 Audio-wise sounds come out mainly from its down-firing loudspeaker and lowly from the earpiece. It can easily fill up a small room and we like how it doesn’t sound too distorted when setting the volume to maximum. The quality is respectable enough for day-to-day use but don’t expect much bass present. We still highly recommend using earphones for a better listening experience.

For software, the narzo 30A runs on Android 10 skinned with realmeUI 1.0 out of the box. But according to realme, it is expected to get an upgrade to realme UI 2.0 that’s based on Android 11 in the 3rd quarter of 2021. 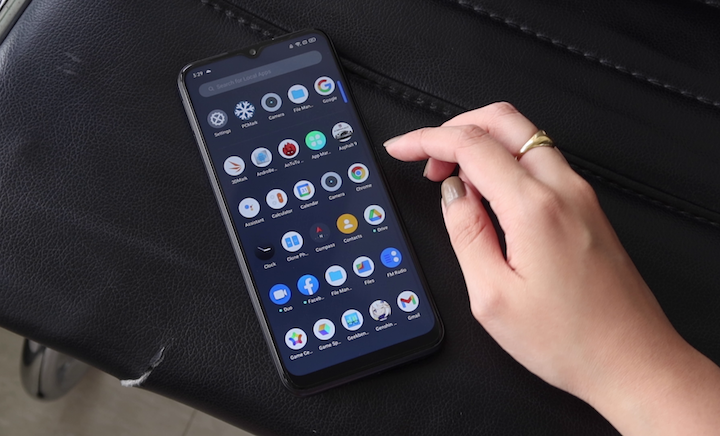 The realmeUI 1.0 resembles a stock Android look with the added realme proprietary apps. It’s clean and straightforward, but you still get the basic customization features such as changing the icons shape, animated wallpaper, using a home screen drawer, and an option to navigate with gestures. There’s also dark mode, digital wellbeing & parental controls, and such convenience tools like the assistive ball and smart sidebar.

Out of the 64GB of storage, we get a usable 50GB, which is still significant. Plus, expanding the storage is more than welcome with its dedicated microSD card slot.

Giving power to this device is a MediaTek Helio G85 processor that’s coupled with a Mali-G52 GPU, and locally we get 4GB of RAM. This configuration is very much identical to the narzo 20, so we get the same deliverable performance that can handle casual gaming. 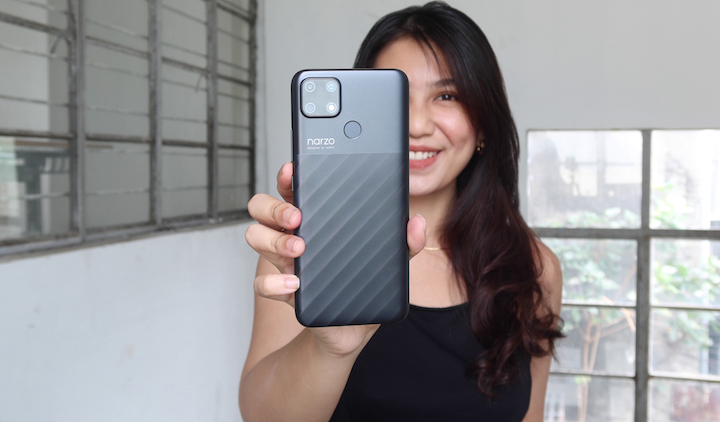 We were able to play graphically intensive games like Genshin Impact and Asphalt 9 on this device, with some occasional frame drops. To improve the gaming experience, we suggest playing under a low graphic setting. Do take note that the phone does heat up a little, but not to an alarming level. 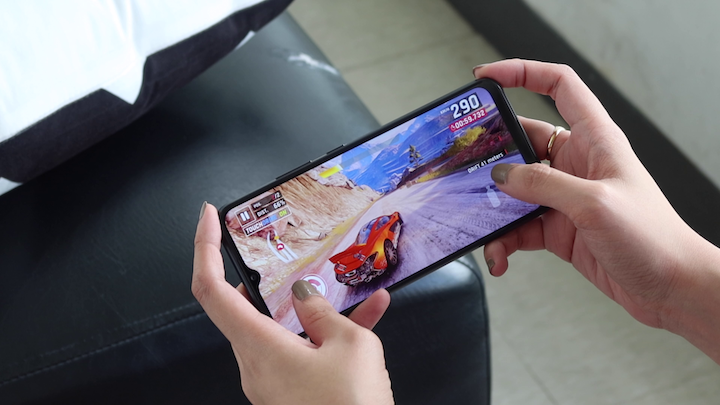 When it comes to day-to-day tasks like browsing the web and navigating around social media, we didn’t encounter any issues, and the performance is smooth throughout.

We ran it through our usual benchmark apps and the narzo 30A got the following scores:

For security, you can unlock the device via face-unlock and the rear-mounted fingerprint scanner. Both of which work accurately with the facial recognition struggling in low light scenarios.

When it comes to battery, it comes equipped with a massive 6,000mAh capacity with 18W fast charging and support for reverse wired charging.

In our Standard Video Loop Test, wherein we loop a 1080p movie at 50% brightness, 50% volume, airplane mode turned on, and with headphones plugged-in, the device lasted a long 33 hours and 5 minutes. Meanwhile, in the PCMark’s battery test we gained a score of 17 hours and 45 minutes which is not bad at all. 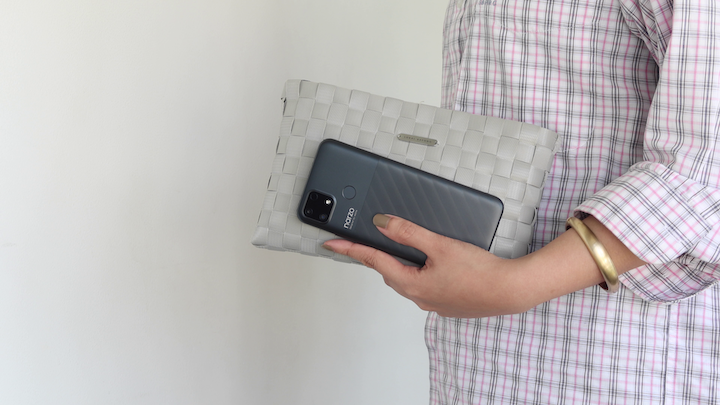 Definitely, the narzo 30A can last you 2-3 days if you’re not a heavy user. Charging, on the other hand, takes about 2 hours from 0-100 percent.

For cameras, don’t be deceived by its camera module. From afar it does look like it’s got a quad-rear camera setup but really it only has two lenses. We get a 13MP f/2.2 main sensor with PDAF and a 2MP f/2.4 B&W portrait. For selfies, it has an 8MP front camera. 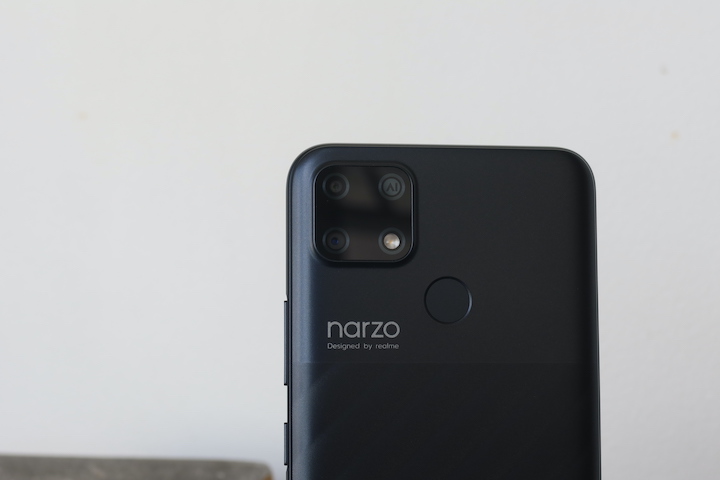 We’re not really expecting a lot with this set-up, but we surprisingly get sharp photos both from the rear and front shooters. Just don’t intend to zoom in as it lacks details. 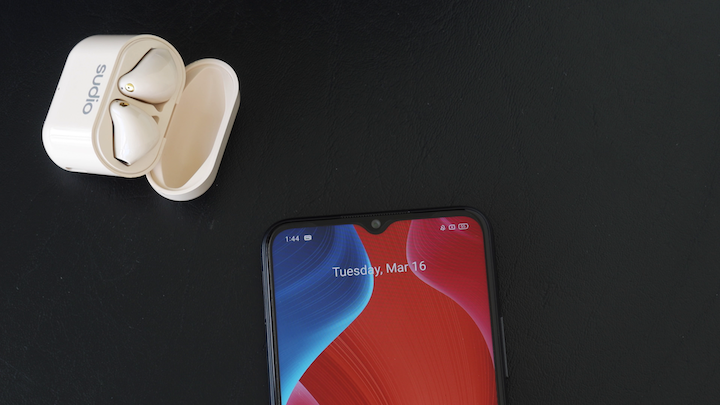 It performs well under well-lit conditions, producing accurate colors. Just make sure to keep a steady hand or take multiple shots as it can get blurry at times. There’s no ultrawide option here, but you can zoom in to 2x and 4x.

As for portrait shots, of course, it’s not the best, but we get considerable subject background separation. At night, using its dedicated night mode does improve the quality. From a noisy and quiet muddy shot, we get better colors and increased brightness.

When it comes to selfies, it gives you fair color reproduction and clarity. There’s a lot of contrast here, but they’re still pretty good for your social media uploads.

For videos, you only get two options, 1080p at 30fps and 720p also at 30fps. Well, they’re really not that good as recordings often end up looking shaky and a bit muddy. But c’mon it’s a budget phone guys. 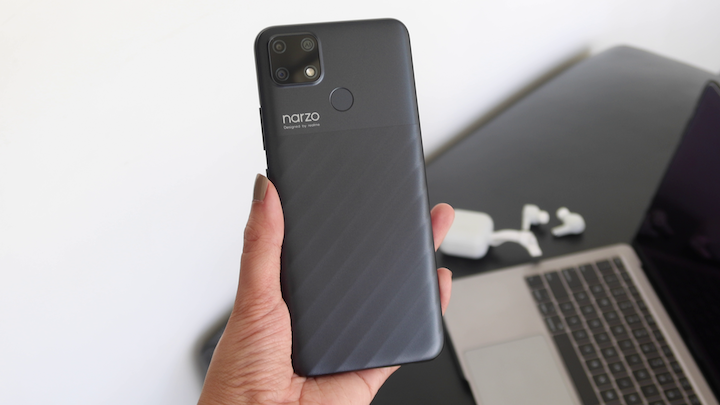 In a way, it is a trimmed down version of the narzo 20 with a few updated features to offer you a more affordable option. It’s hardware is still very good for 2021 and the battery is just a beast for your daily media and gaming use. 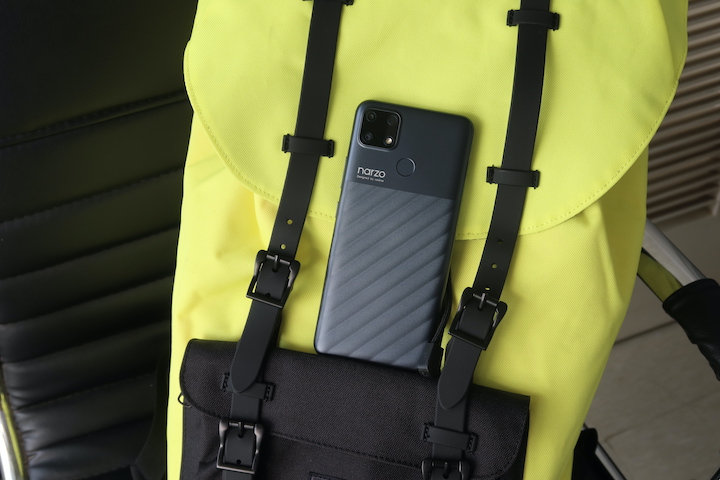 So if you’re on a strict budget under 7k, but still want a phone that can handle daily multitasking and casual gaming; plus the presence of a headphone port and expandable storage, then the narzo 30A is a very good option. Just remember that this is a Lazada-exclusive deal for the Philippine market, so it will only retail through realme’s official flagship store on Lazada.

It will get a discounted price of PHP5,990 only on March 27 as part of Lazada’s Birthday Sale.

And that’s it for this review. Share to us what you think about this realme narzo 30A in the comments below.

With inputs from Arel Ebana