If we’re talking about bang for your buck entry-level smartphones, one of the top brands we have in mind is realme, especially with their Lazada-exclusive narzo line. The brand recently released this realme narzo 50A, which packs a monstrous 6,000mAh battery, 6.5-inch HD+ display, and a triple rear-camera setup. We’ve been using it as a daily driver for quite a while now, and here’s what we think. Let’s start with the design. Upfront, we have a large 6.5-inch HD+ LCD panel, while at the back, we get its triple camera setup along with an LED flash and a fingerprint scanner that I find to have quite an odd illusion. The rear panel has a rigid texture, which helps grip this device better than other smartphones with a polycarbonate finish. Even though there’s a free jelly case included in the package, I didn’t use it, and I feel like putting this device on a case won’t be necessary— not unless you want extra protection. The unit we have is in the Oxygen Green colorway, but it is also available in Oxygen Blue. 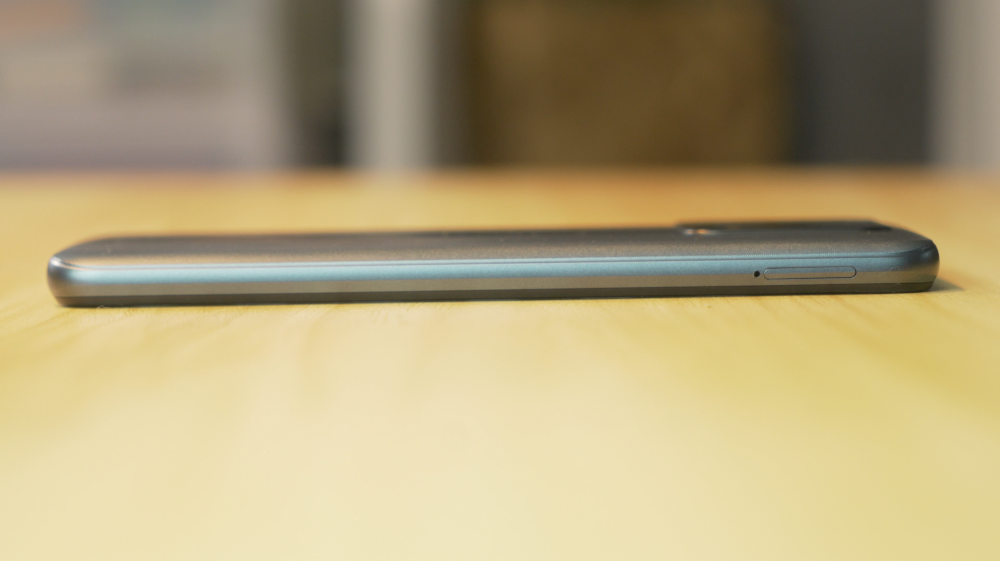 For buttons and ports, situated on the left side are the dual SIM card tray with a dedicated microSD card slot. While on the right are your volume rocker and the power button. Nothing can be found at the top, while the 3.5mm headphone jack, USB Type C port, call microphone, and speaker grille are all placed at the bottom.

Overall for design, I am a fan of the overall look and feel of this device. Although it doesn’t look modern compared to some other smartphones in its tier, it looks stealthy and clean. However, note that it is also a little hefty at 207g, which I think is an excellent trade-off considering that this device has a massive 6,000mAh battery. 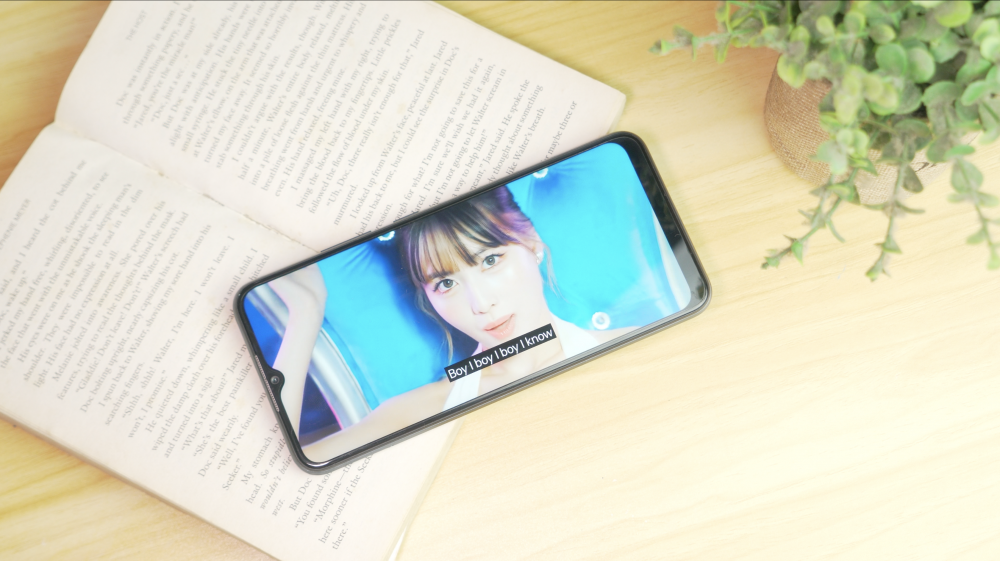 The realme narzo 50A is an entry-level smartphone, and to achieve this, they had to cut corners, which is evident in the display department. It sports a 6.5-inch LCD screen with a resolution of 1600 x 720px, capable of producing 270 PPI. Watching multimedia content on this is okay; it’s not too sharp, but it’s enough for your day-to-day needs. Since this is an LCD panel, we noticed some spillage around the screen, especially when the UI is set to dark mode. 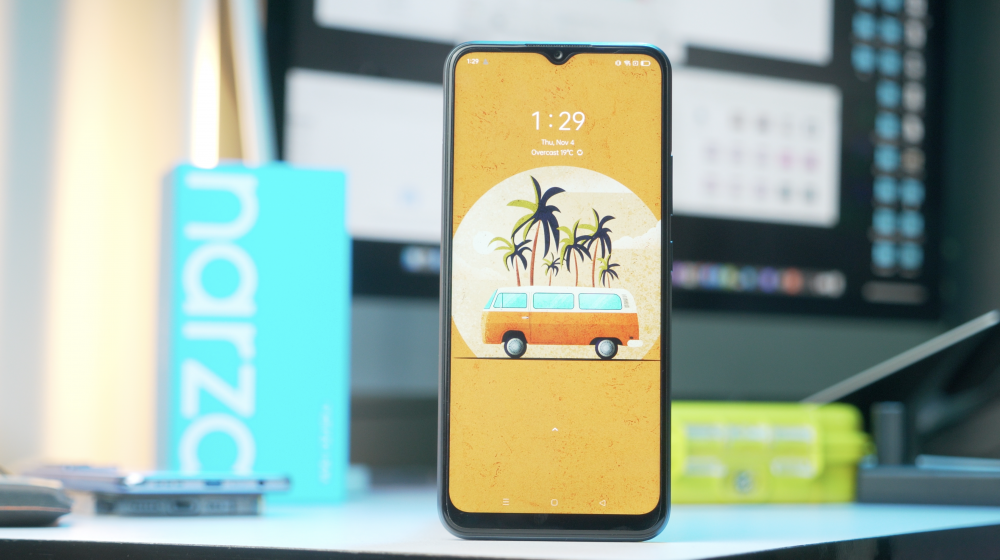 This display has a peak brightness of 570 nits, so it can still be challenging to see under direct sunlight.

When it comes to audio, It can fill up the room at maximum volume, but we don’t recommend you cranking up its speaker at this level because it does sound tiny. Thankfully, there’s a 3.5mm audio port for you to take advantage of. Surprisingly, at its price range, the realme narzo 50A produces excellent quality images. The colors look very natural; HDR is also present. It’s also got Portrait Mode, which produces a nice bokeh effect, although the images have an overly exposed background when the subject is placed against the light source. There’s also a 50M option in the camera app, where it takes full advantage of the 50 MP primary sensor, but to be honest, there’s no noticeable difference between a photo taken in normal mode. When it comes to macro photography, I must be honest; it produces detailed photos with accurate colors, which is rare to see in this price category.

When it comes to night mode, photos come out muddy, colors are pale, and are definitely not usable in any case.

As for selfies, it produces images that look natural, from colors to skin tones. There’s also an HDR taking effect, making sure that the subject and the background have an equally balanced exposure. Beauty mode is also present, but thankfully, it didn’t produce overly processed images.

Video-wise, the realme narzo 50A can shoot up to 1080p at 30fps. Unfortunately, there is no optical image stabilization, digital stabilization, or anything of that jazz, so expect to have shaky videos. But overall, the images and videos produced by this device’s camera are great and can suffice your social media needs. Software-wise, it’s running on Android 11 skinned with realme UI 2.0. If you are familiar with realmeUI, it is very straightforward to use. And just like most Android devices, it comes with pre-installed apps such as Agoda, LinkedIn, Booking.com, 92, and Pubg Mobile aside from the usual Google apps. Apps can easily be uninstalled if you are not planning to use them. The UI comes with several customization options like changing the icon shapes, layout, home screen transitions, text sizes, font styles. If you want to add some personality to your device, you can also browse themes through the themes app that is also pre-installed.

Out of the 64GB of storage, we get a usable space of 33GB. And if that’s not enough, you can bump the storage via a microSD card. When it comes to its performance, powering the narzo 50A is a Mediatek Helio G85 processor coupled with a Mali G52 MC2 GPU, and 4GB of RAM. As a daily driver, it can run smoothly when doing basic tasks such as browsing the web, watching videos, and going through social media apps. Still, we suggest that you make it a habit to close unused apps so it doesn’t feel a little laggy when numerous activities are running in the background. 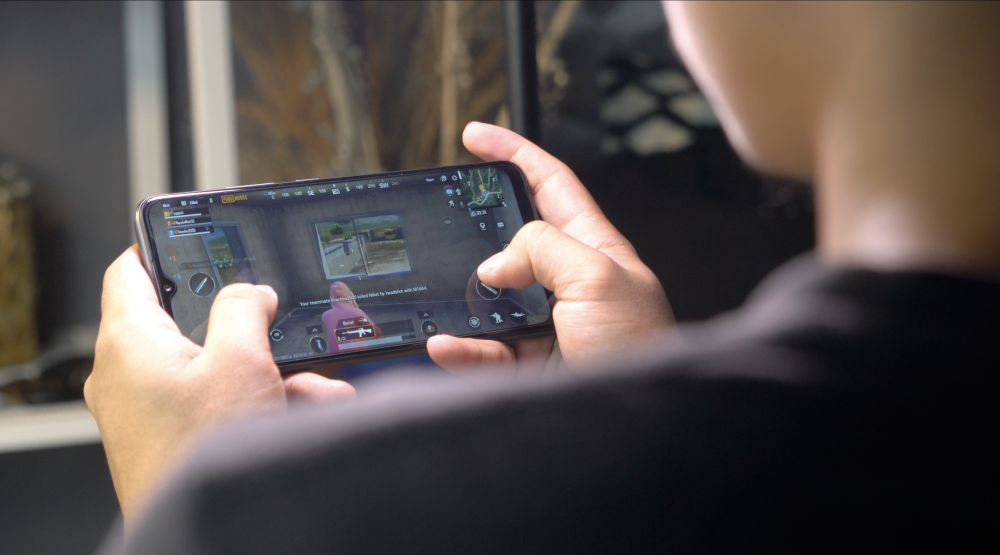 On the other hand, playing games that are heavy in graphics can be quite challenging to this device. In addition, it stutters now and then when playing at the default graphic settings, so better set the graphics level to the lowest possible for a better gameplay experience.

If you are interested in numbers, here are the benchmark scores that we got:

The realme narzo 50A has the usual connectivity features such as Dual-SIM support, 4G LTE, Wi-Fi, Bluetooth 5.0, GPS, and of course, its 3.5mm audio jack. Talk about battery, giving power to this device is a monstrous 6,000mAh capacity with support for 18W fast charging. It took us about 2 hours and ½ to fully charge the phone from 0-100%.

We didn’t have the chance to benchmark the battery through PCMark’s Battery test because, after a few minutes of running it, the app is crashing for some reason. But, we’re happy to report that in our standard video loop test (which entails the device running a 1080p video on loop, airplane mode turned on, headphones plugged in, with 50% brightness), we got a total playback time of 28 hours and 52 minutes which is expected considering its capacity. 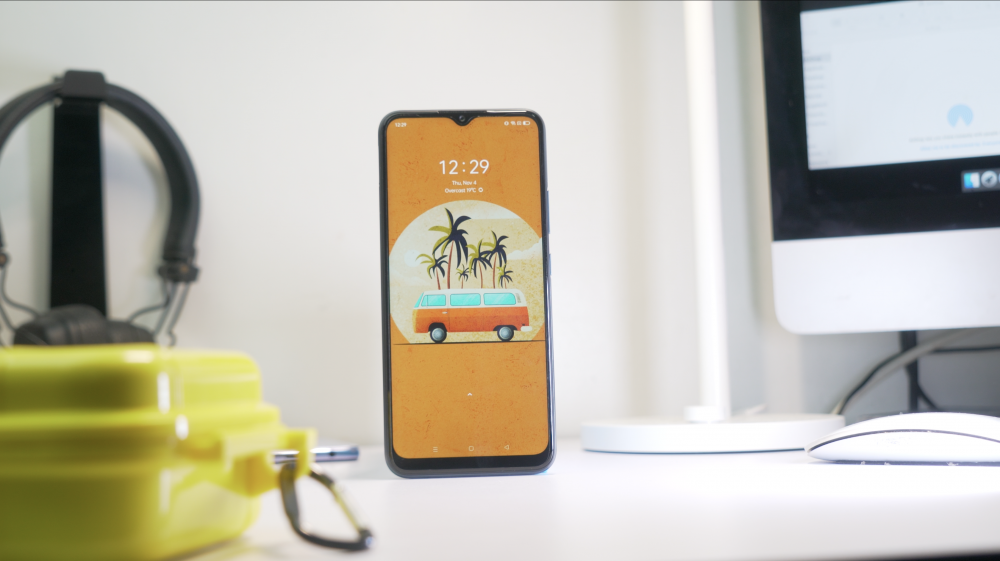 Alright, so let’s talk about the price. The realme narzo 50A is available for PHP 7,990. With a few extra bucks, comparing it to its cheaper, turned down sibling, the 30A, we think that the narzo 50A is a better deal considering that you’ll get a larger 6,000mAh battery, a much decent processor, and a much more versatile camera. Thus, making this device recommendable to those consumers whose eyeing a smartphone under PHP 10k.

And by the way, if you are planning on getting this device, it will be exclusively available on Lazada on their 11.11 event and will have a PHP 1,000 discount with free shipping when purchased on that date.