It’s been a year since Samsung released the Galaxy Note7, it was a superphone anyone would have wanted but unfortunately, it had to be retired early. The fiery incident was a hard and expensive lesson for the company, but it brought forth better devices such as the Galaxy S8 and S8+. A year later, we now have the Galaxy Note8. 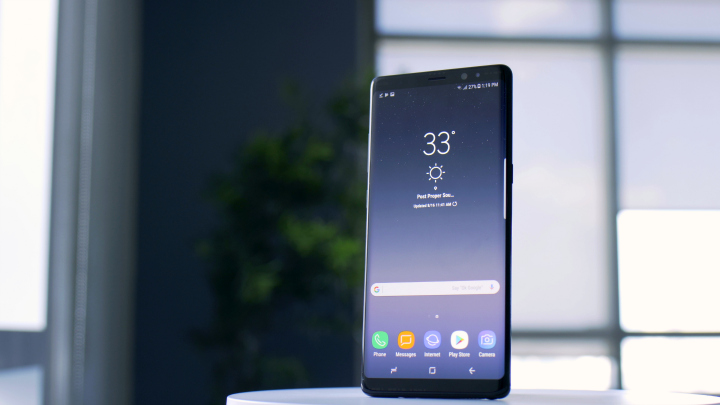 The Galaxy Note8 sports a different look compared to its predecessor. For one, it no longer has the thick top and bottom bezels as the Note7 and now sports the Infinity Display found on the Galaxy S8/S8+ but with smaller curves at the corners. That said, the Note8 has less bezel and more screen. 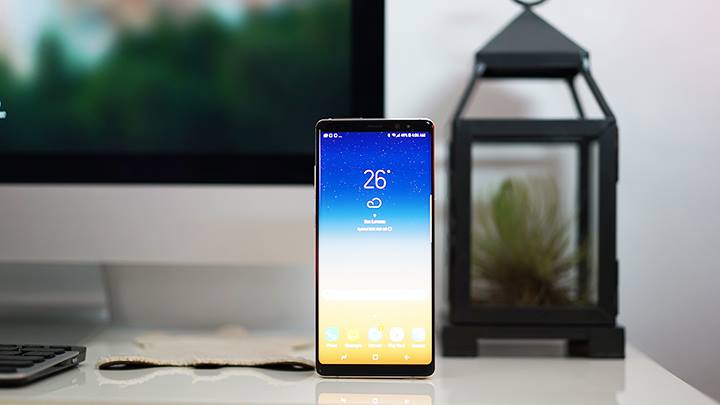 Speaking of the screen, the Note8 packs a large 6.3-inch screen on the front, with the receiver, 8MP camera, sensors, and the Iris scanner just above it. 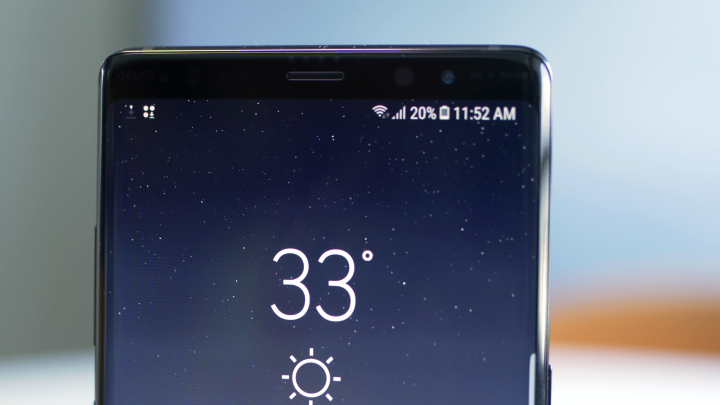 It has the same physical key layout as the Galaxy S8/S8+ with the volume and dedicated Bixby buttons on the left, and the power/lock button on the right. The buttons are very reachable as they are positioned near the middle of the device. 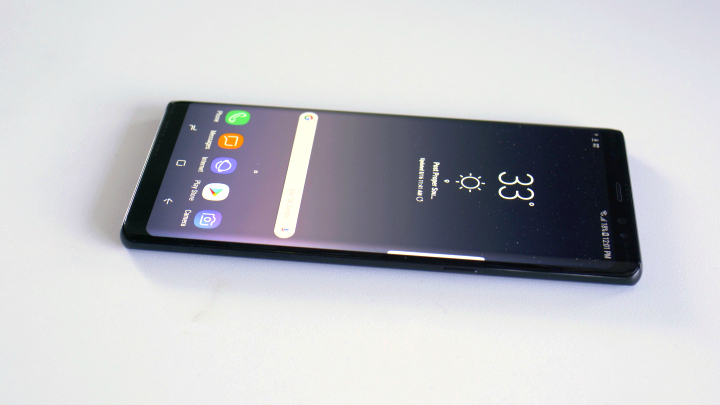 Up top, we have the hybrid SIM/microSD card tray and a noise-canceling microphone while down at the bottom end are the 3.5mm audio port, USB Type-C port, primary microphone, speaker grills, and the slot for the S-Pen stylus. 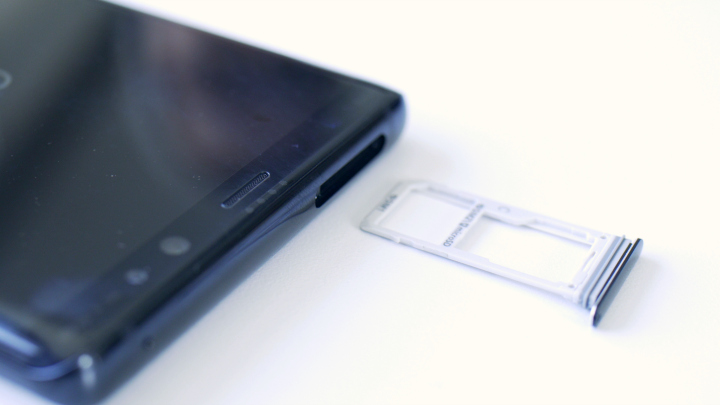 Flip it on its back and you will see one of its biggest improvements — the dual 12MP cameras. Also found here are the dual-tone, dual-LED flash, heart-rate sensor, and the fingerprint scanner. 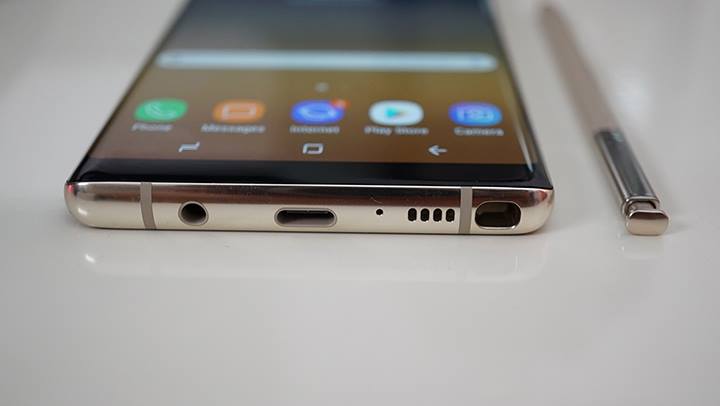 On the hands, the Note8 feels similar to the S8/S8+. It has a glossy, cool to the touch, metal frame. Since the glass curves to the edges, it blends perfectly well to the frame for a seamless look and feel. Despite its size, the rounded corners and tapered edges make the Note8 still easy to use with one hand thanks to its 74.8mm width. Although navigation would still be a lot easier using two hands. The solid metal frame gives way to an all-glass front and back panel, both protected by Gorilla Glass 5, the best the industry currently offers, but very prone to smudges and fingerprints. The Note8 still features the same IP68 dust and water-resistance that allows it to be soaked in water in a depth of 1.5 meters up to 30 minutes. Not that we recommend you take this phone for a swim but more like an assurance that any contact with water for some considerable amount of time isn’t going to be a serious concern. The S-Pen on the Note8 is the same as the Note7 so we’re looking at the same specs – 0.7mm pixel size, 70ms latency, 360Hz scan rate with 4,096 pressure levels. It’s still accessible at the bottom right of the handset and enters and exits with a satisfying click, similar to what you’ll experience in some spring-loaded retractable ball-point pens. In addition, it is also IP68-rated like the Note8. 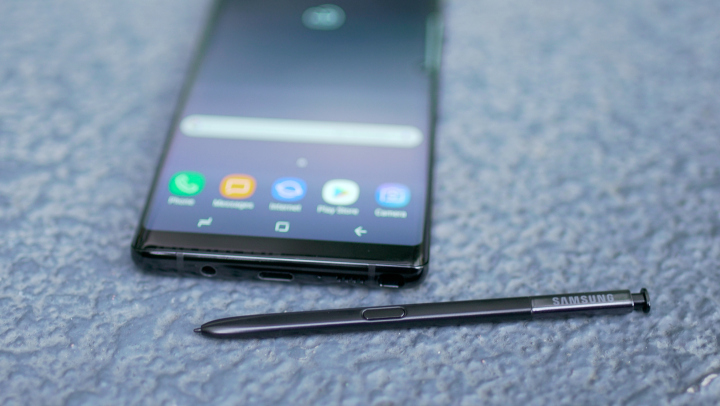 It’s a very handy tool to those who are heavy note-takers and artists who love to draw or sketch a lot. The accuracy and pressure sensitivity is next to nothing. As expected, display quality is good. It’s sharp, vibrant, with punchy colors. Like with the S8/S8+, the resolution is set to FHD+ (2220 x 1080) by default but you can adjust it to run on full WQHD+ for VR applications, or go lower at HD+ to save on battery. It also allows users to select from multiple screen modes and adjust color balance. That said, the Note8’s display is good for a wide variety of tasks such as watching videos, playing games, or just casual browsing. 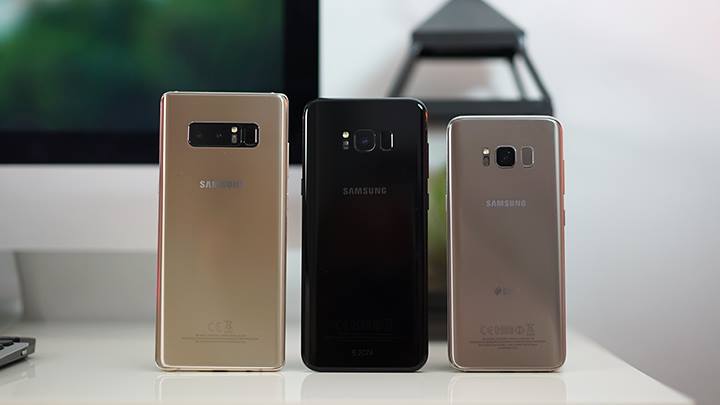 Audio-wise, the Note8’s down-firing speaker is rich with noticeable bass and crisp trebles. It’s not as immersive as the one we experienced with the HTC U Ultra. Still, the quality is good for casual listening.

Running the software department is Android 7.1.1 Nougat with Samsung Experience version 8.5. If you have used a Galaxy S8/S8+, the experience would be familiar as it has the same UI and icons. 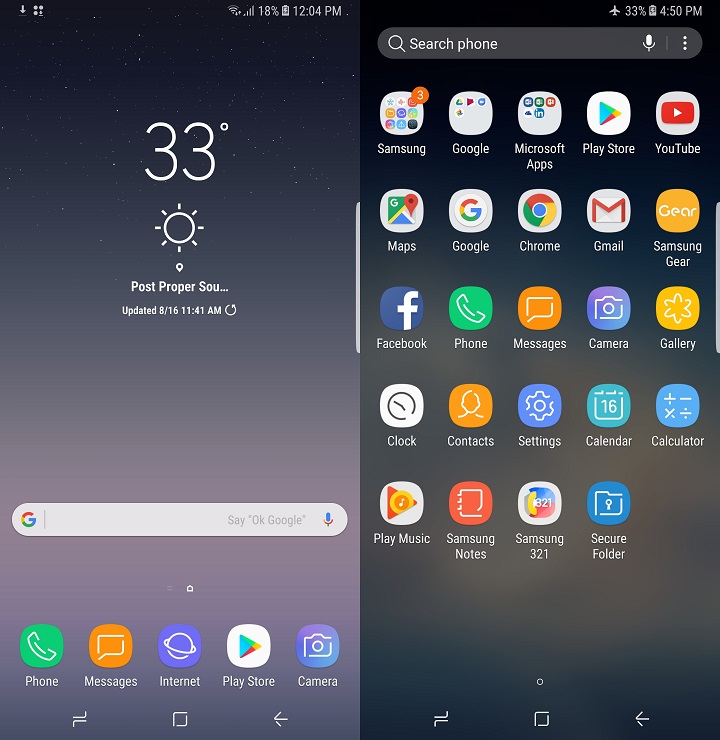 The Edge Screen is also found here and takes advantage of the Note8’s curved sides. A simple swipe will reveal it and serves as a quick access to your phone’s favorite features like app shortcuts, weather, compass, contacts, and clipboard, to name a few. Pre-installed apps are present Google’s basic apps and Microsoft productivity apps. Samsung’s utility apps are here as well like Samsung Connect, Samsung Health, mySamsung, and Galaxy Apps. Bixby is here as well as your loyal virtual assistant, aside from Google Assistant. All in all, it doesn’t deal much damage to the 64GB storage, leaving its users with 51GB of usable space which is not bad. You can further expand it via microSD for up to 256GB capacity. The Note8’s defining software feature though is for the S-Pen. It has features as last year’s Note but with added features. Launch the S-Pen and you will be greeted by a menu of features like Create note, View all notes, Smart select, Screen write, Live message (which allows you to record a doodle), Translate, and Bixby Vision. 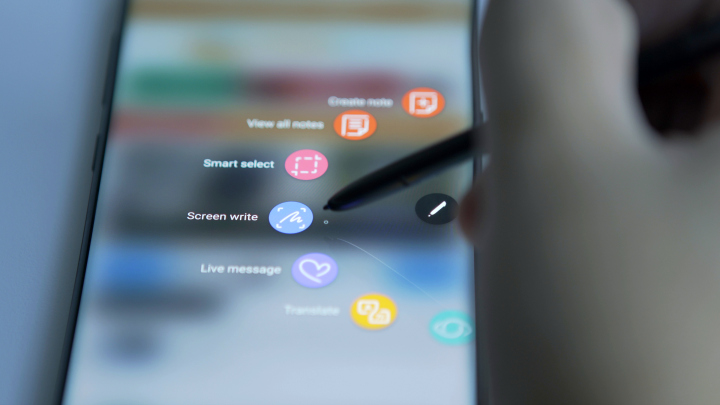 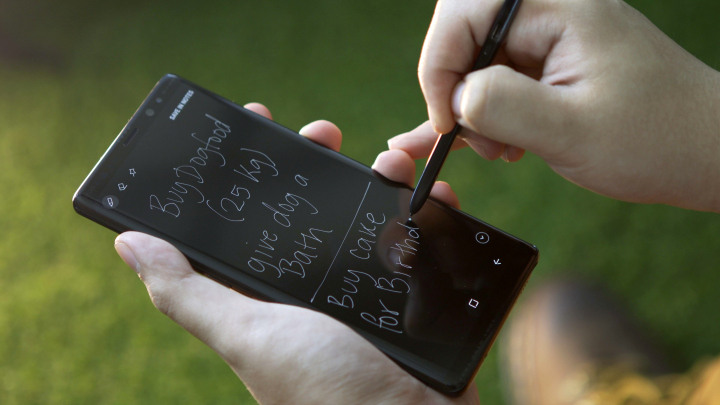 There’s even a feature that lets you quickly write notes on the Always On Display. Just pull out the stylus and the Always On Display will switch to a black and white notepad. That said, you won’t need to unlock your device and launch a notepad which is perfect for quick note-taking. 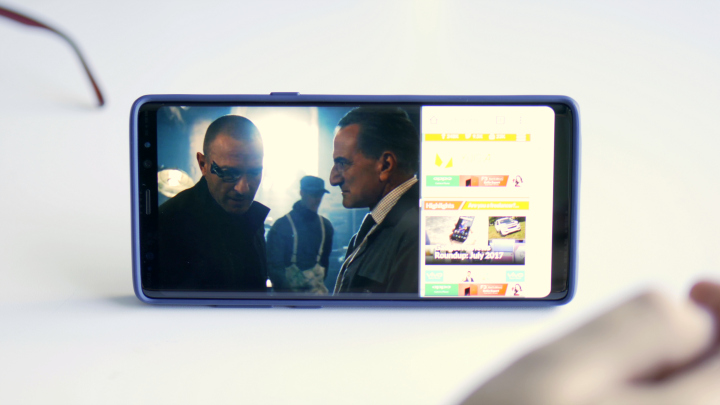 Now if you’re a heavy multitasker, the Note8 can take advantage of the large screen using its Multi-window feature. Just press on Recent Apps button, and you can choose which apps you would like to run side by side. The feature is also available on the S8/S8+ but it feels more functional on the Note8. For those who want to take productivity up a notch, the Note8 also supports Samsung DeX. That said, we can only expect the Note8 to become more powerful when it receives Android Oreo.

The Galaxy Note8 is Samsung’s first smartphone to sport dual rear cameras consisting of two 12MP Dual Pixel shooters. The first one is the main shooter with f/1.7 aperture, while the other offers 2X zoom (up to 10X digital zoom) with f/2.4 aperture. It even offers 1/24000 sec to 10 sec shutter speed in Manual mode. Both sensors feature Optical Image Stabilization for smooth and shake-free images and videos. 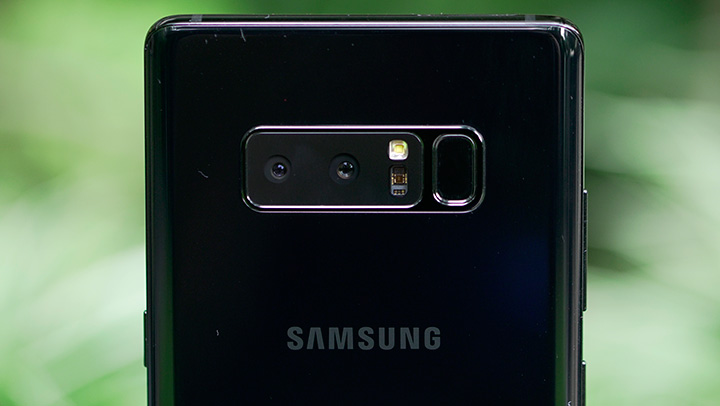 As expected, performance is great as the cameras are fast and can produce images with outstanding detail and accurate colors, even in low-light. What impressed us even further is its OIS performance which becomes evident when using the camera’s zooming capabilities. It’s smooth and has kept the shaking to a minimum, allowing us to easily keep our distant subject in the frame. 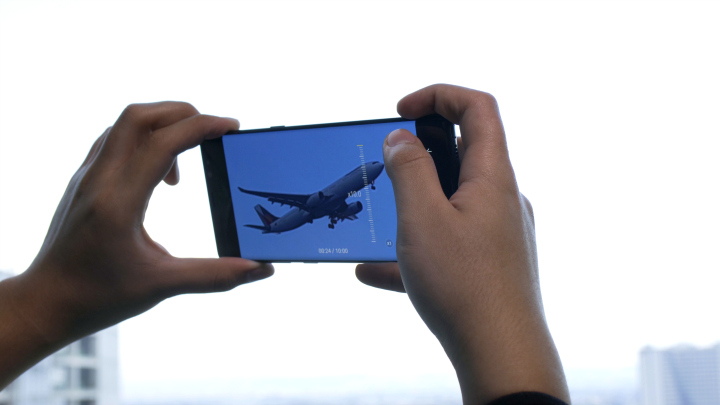 Another trick that the Note8’s dual camera can do is to shoot subjects with artificially blurred backgrounds. The feature called Live Focus, allows the user to adjust the focus and level of blur before and after taking the photo. Images produced with that effect are actually good. Some blurring imperfections can still be spotted but only if you look closely. Overall, Samsung did a good job for this feature and almost perfected it. When it comes to selfies, the Note8 is equipped with an 8MP front camera with f/1.7 aperture, the same specs as the S8/S8+. It’s bright and wide enough for some group selfies. Quality is okay and similar to that of the S8/S8+. There’s a beauty effect, stickers, as well as masks if you want to get wacky. Take a look at the samples below:

As for video recording, it can shoot at up to 4K resolution at 30fps in MP4 format. Quality is good and steady thanks to OIS. Watch the sample below:

Samsung used the same Exynos 8895 chip they placed in the Galaxy S8 to the Note8. It’s an octa-core processor that uses two clusters of quad-core processors working in tandem to provide high-performance computing power when needed and then switches to the power-efficient cores when on idle or not doing heavy tasks, apparently to help conserve battery life.

We’ve seen and observed how the Exynos 8895 performed in the Galaxy S8 that we’ve been using since it was released back in May and during the entire time we have never had any issues with it. It’s fast and powerful, sensors like the fingerprint and Iris scanners are very quick, and can run smoothly multiple apps at the same time yet remain very responsive. 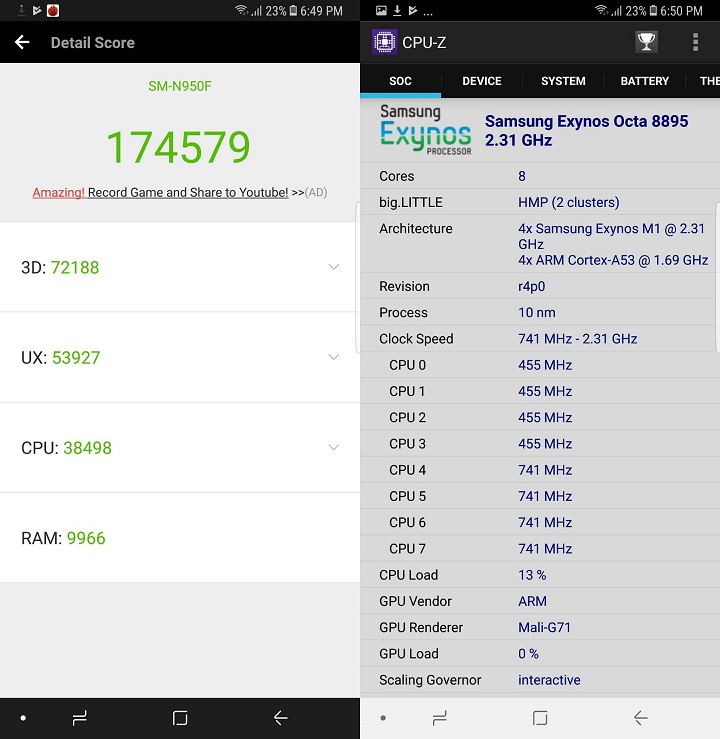 Samsung added more memory, 50% more to be exact, on the Galaxy Note8. It’s not the first Samsung smartphone to have 6GB of RAM (the Galaxy C9 Pro took that title) but we think it’s high time for Samsung did just the same.

To further improve performance, Samsung used UFS 2.1 storage for the Note8. This means faster read/write speeds to the internal storage which can be greatly useful when recording 4K videos or moving large amounts of files. So far, we observed a 15% improvement in write speeds on the Note8 compared to the S8 in our benchmarks (171MB/s -> 203MB/s). 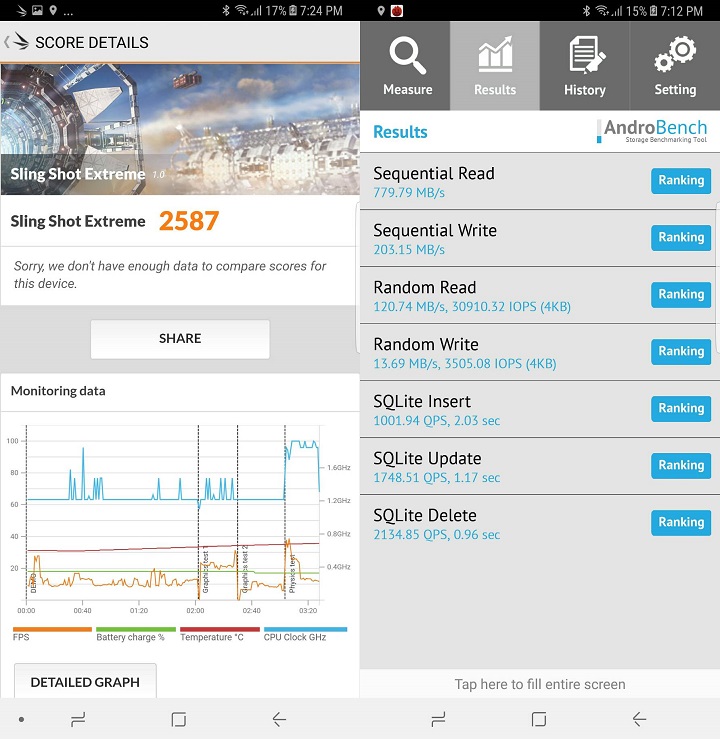 Calling with Samsung’s Note8 is what you would expect from a flagship device like this one. Calls are crisp, the microphone offers better audio with noise cancellation, and is quick to capture signal reception in all areas we’ve been with it so far. 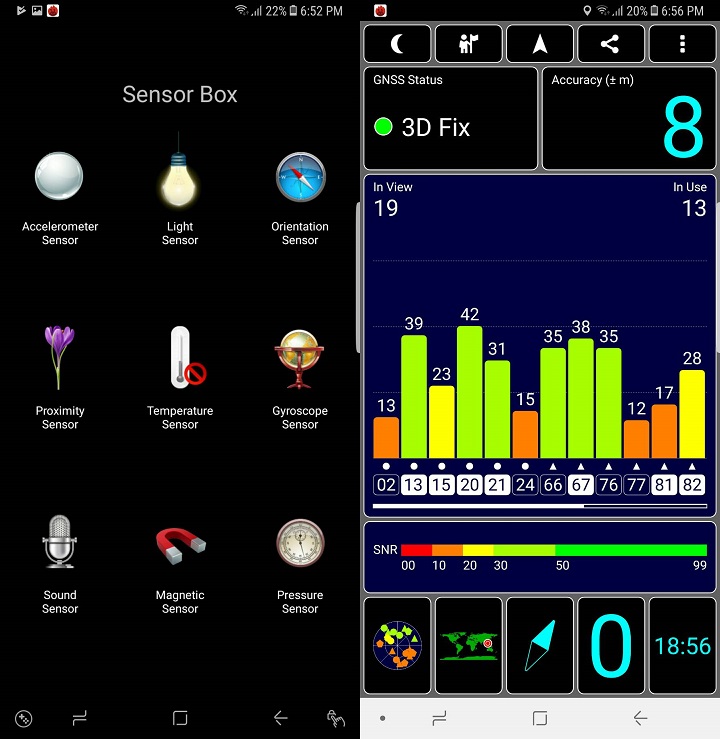 Connectivity features are better than most smartphones as it sports Bluetooth 5.0 similar to the S8, which enables you to pair the device to more devices at the same time. Same goes with WiFi which works well at wider ranges. NFC is also present here, as well as GPS. So far all features are working as advertised.

Battery life is a touchy subject, considering the fate of the Galaxy Note7 last year. This year, Samsung is being extra careful, and this is evident with the way they treated the Note8. 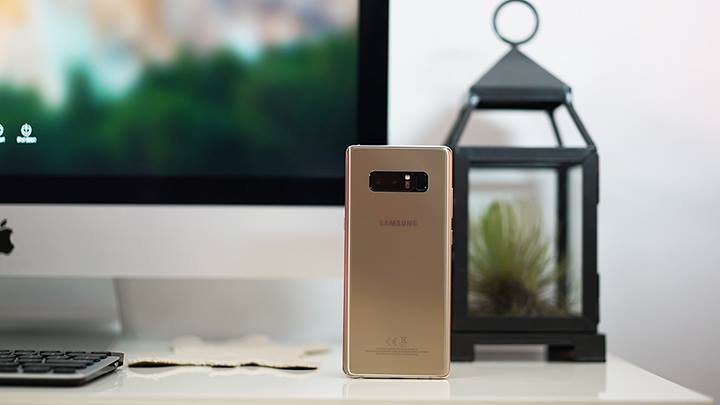 First, they sacrificed a little bit of the thickness of the device. The Note7 had a very thin 7.9mm profile while the Note8 this year is slightly thicker at 8.6mm. That extra 0.7mm gives more room for the built-in battery to breathe.

The move is perfectly understandable, given the circumstances and history of the Note7. It’s a small sacrifice in return for safety. That’s to be expected if they want to regain the trust of their customers back.

Despite the lower battery capacity, the Note8 managed to do well in our battery tests — clocking in at 17 hours of continuous video playback on a single full charge. PCMark, on the other hand, rated it at 9 hours and 31 minutes. In our daily use, the Note8 easily lasts more than an entire day, but that heavily depends on individual usage patterns.

The Galaxy Note8’s comeback is measured and calculated, but definitely a big improvement over the Note7. They pushed the boundaries a little bit here and there — the bigger display, dual-camera setup and unified design signature are the main focus points. Simply put, it is undoubtedly a great device — big in size, bold in intention. And, if there’s one other item we’d hope to cross, that would certainly be the asking price — Php49,990. 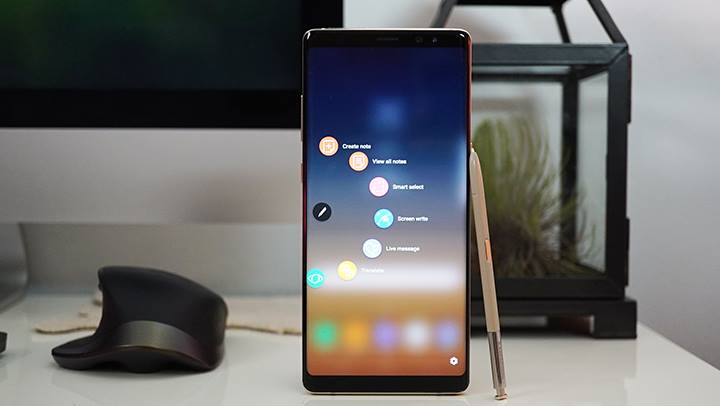 So if you have the means and looking for a powerhouse of a smartphone that can handle multimedia and gaming with ease, can take great photos and videos, lets you write on it, and literally multi-task on-the-go, this is it.