Last night, Lenovo Philippines introduced a slew of new products including the Ideapad 100 and 500, the Yoga 900, and the Yoga Tab 3 Pro. The latter got our attention with its built-in kickstand and projector so we did a quick hands-on and first impressions during the event. 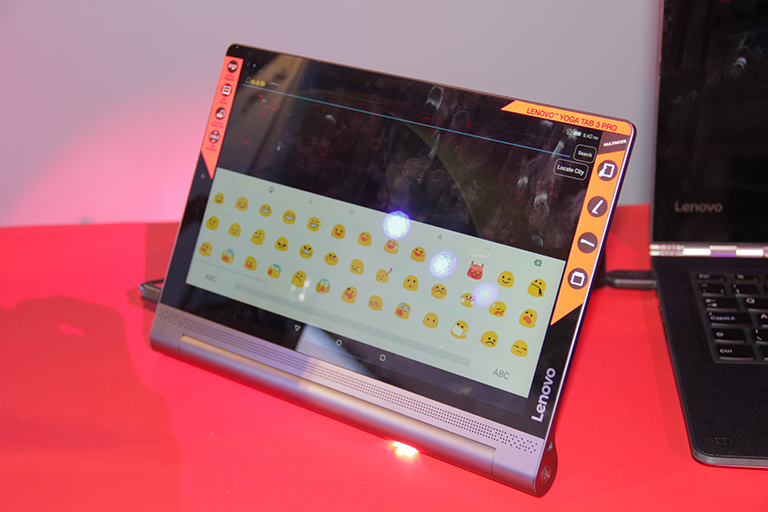 As a refresh to the Yoga Tablet 2 Pro that was launched late last year, the new Yoga Tab 3 Pro aims to build on top of what its predecessor has laid out. The new tablet is now smaller with its 10.1-inch QHD IPS display that equates to a decent 299ppi. There are good viewing angles on this slate thanks to its IPS panel which make sharing content with friends easier. 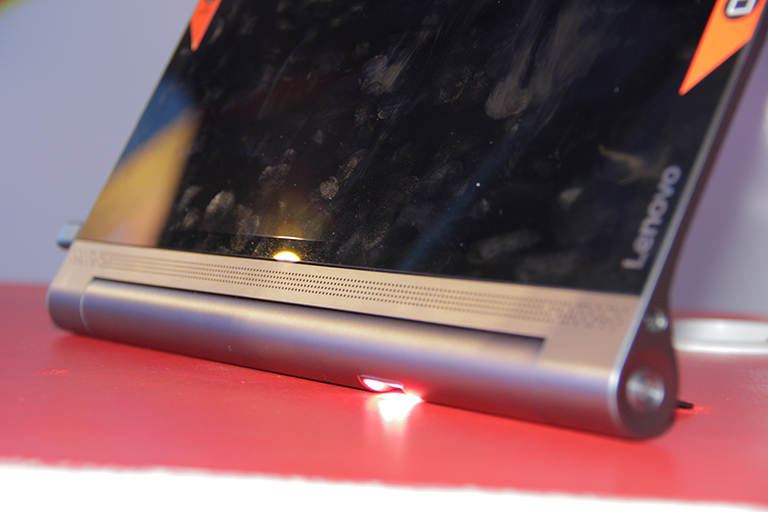 At the bottom of the screen is the speaker grille with four front-facing speakers made by JBL and feature Dolby’s ATMOS sound technology that’s present in other Lenovo smartphones. We played a couple of videos on it and the speakers indeed delivered powerful sound that should be enough when used inside an average-sized room or outside with a few people gathered around it. 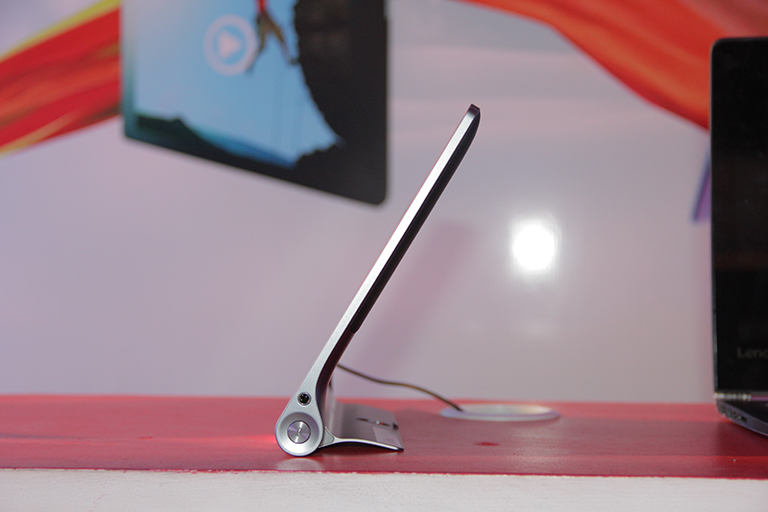 What makes this unique from other tablets is that while those still need a separate kickstand, the Yoga Tab 3 Pro has a metal one built-in so you could use the device standing up, lying down, or slightly angled for easier typing. 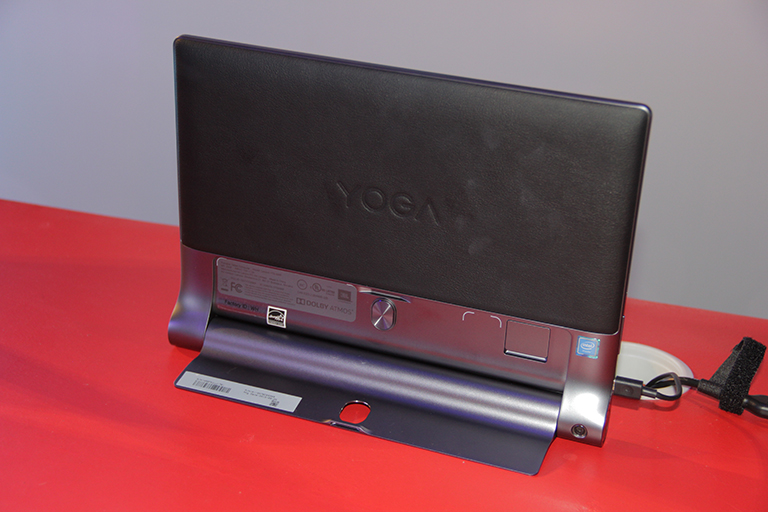 Just press the button at the back to pop the kickstand out and rotate it to a position that fully suits your typing needs. Additionally, you can also make use of the hole where the button goes and hang it on a nail or anything similar so you could video chat, for example, whenever your hands are full. 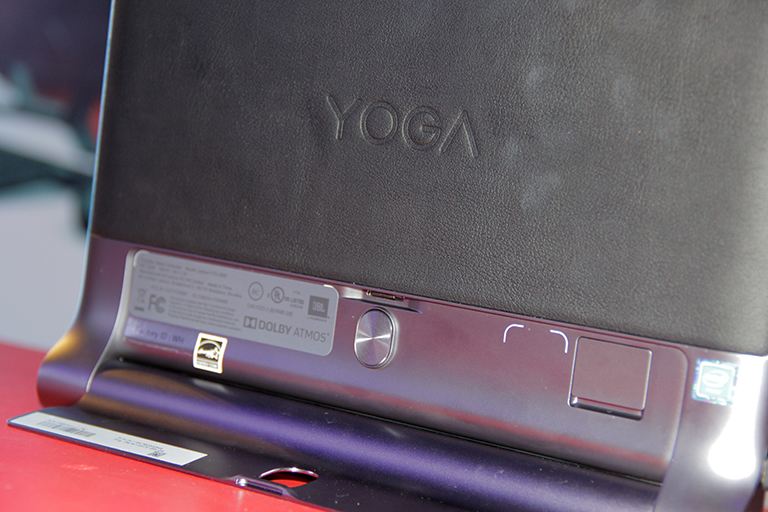 Taking a closer look at its rear, the back panel has been covered with leather not just for aesthetics but also for added grip and comfort while using it. Also seen here is the compartment for the storage expansion that you just need to pop open in order to access. It could support as much as 128GB so you could store media files without the fear of running out of space. 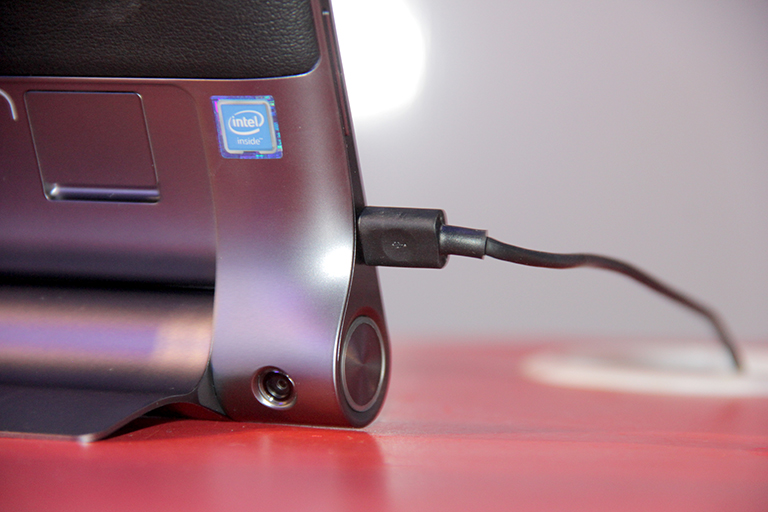 At the left edge of the device is where the somewhat large screen lock button is situated that’s surrounded by an LED notification ring. Just above it is where you charge the device using a microUSB cable along with the volume rocker. The 13-megapixel rear camera is also placed in this area. We like how the lock button is placed here as it is easy to reach regardless of what orientation you’re using the tablet. 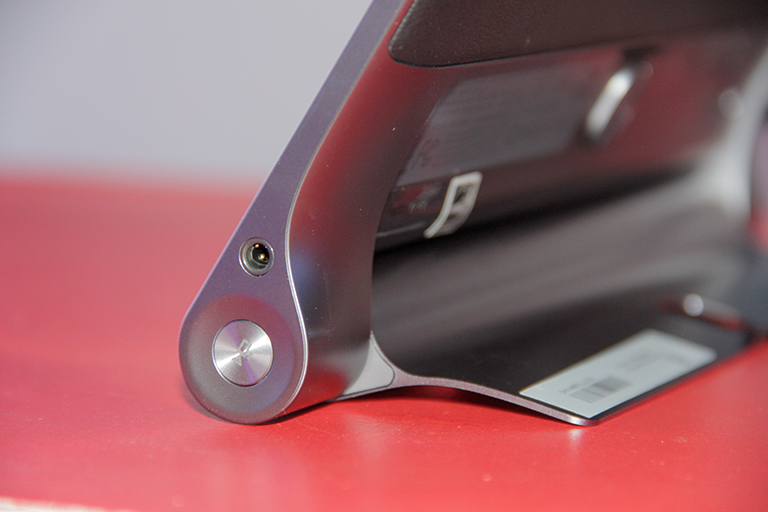 On the opposite edge, you’ll find the dedicated button that aids in focusing the image once you start projecting images. Seated next to it is the 3.5mm audio jack. 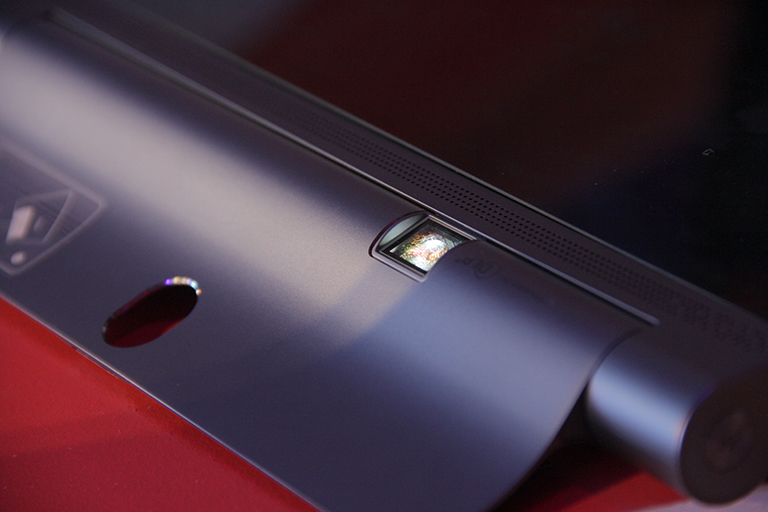 The projector itself is embedded along the kickstand so you could rotate it freely and point it towards any surface. Lenovo claims it could project images up to 70 inches wide and 480p resolution. This feature lets users share media conveniently to nearby audiences whether it be streaming videos, browsing photos, or watching movies.

The tablet has also been certified to be water-resistant so you wouldn’t have to worry about accidentally spilling a drink on it when you use it at parties, for example. Overall, the Lenovo Yoga Tab 3 Pro looks to be a promising gadget for media consumption — it’s got an impressive QHD display, good viewing angles, loud speakers, and a built-in projector right out of the box.

Although what we noticed while briefly browsing the tablet was that it registered our touch inputs with a short delay even while just unlocking the device or scanning through the main menu. It’s not much of a deal-breaker, but it’s not as responsive as other slates running Android 5.1.

The Lenovo Yoga Tab 3 Pro is priced at Php29,999 and will be available in all Lenovo Exclusive Stores and resellers nationwide.