Since Samsung already announced the Galaxy S4 Zoom, we thought of giving you guys a quick preview of the digital camera with full phone functionality, as well as our early thoughts about it.

The body of the recently launched half-phone-half-camera is a complete overhaul from the previous model (Galaxy Camera GC-100). It’s now a tad slimmer and smaller than its predecessor, and it sports a more streamlined form factor. Because of this, the S4 Zoom looks more like a phone with a ginormous sensor rather than a digital camera with an unnecessarily big display. 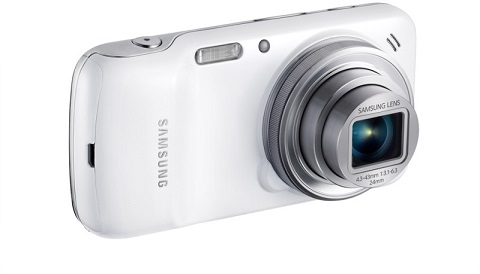 Speaking of display, the SGS4 Zoom’s screen is half-an-inch smaller compared to the one found on the Galaxy Camera. It sports a qHD (960×540) resolution and is outfitted with a Corning Gorilla Glass 3 to ward scratches.

Samsung also changed the layout of the buttons on the Zoom. The firm included physical home button on the front which is sandwiched between the Menu (left) and Back (right) capacitive buttons, as well the familiar three button affair (Power and Volume rocker) on the right side. They’ve also redesigned the shutter key which is now less conspicuous due to the fact that it blends with the device’s silver-coated side panel.

The curvature on the backside, which acts as a grip, reminds of the one found on the Nexus S only steeper and has a dimpled surface for better handling. Beside the sloping grip is a Xenon flash unit and what seems like an AF assist illuminator.

At the center of the action is the S4 Zoom’s collapsible lens capable of 10x optical zoom which covers a range of focal lengths from 24mm to 240mm. It has an aperture range of f/3.1 at the widest and f/6.3 at the telephoto end. This is a bit of a downgrade actually, as the Galaxy Camera is equipped with a relatively faster lens (f/2.8-5.9) compared to its successor. 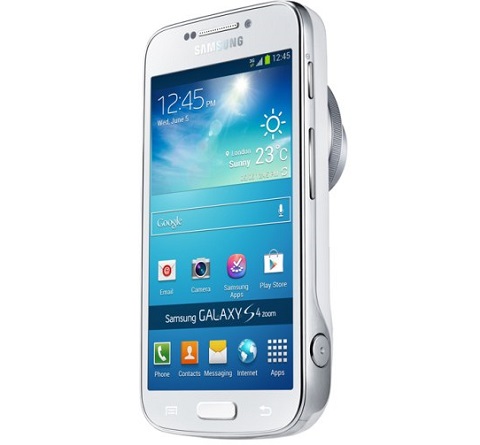 Around the lens is a Zoom Ring which not only controls the device’s zoom features, but is also configured to do other tasks like In-Call Photo Share and gives user quick access to menus and camera settings.

Tucked underneath the lens is the SGS4 Zoom’s 16MP BSI CMOS sensor which is accompanied by the other components such as the 1.5GHz dual-core processor, 1.5GB RAM and 8GB memory. We’ve seen similar a configuration with the fairly new S4 Mini.

We think it’s great that Samsung was able to make their new brainchild handier as opposed to the previous which looks like we’re holding a brick when we’re using it. Unfortunately, the SGS4 Zoom’s slimmer body comes at a price and that’s the smaller screen. However, we feel that the more modest display of the Zoom isn’t gonna be that big of a deal for most users, because 4.3-inch is still fairly large in camera standards.

Another commendable decision by Samsung is the use of a dual-core processor in the Zoom rather than go on all fours. For one, we think that a quad-core processor on device that’s primarily built to take pictures is impractical and would probably just end up gulping down on its precious juice. And speaking of juice, we also liked how the Zoom is now equipped with a more sizeable battery compared to GalCam which only has a 1,650mAh power source.

What is rather disappointing about this new device is the downgrade on the lens. I mean we could probably forgive the use of an optics with shorter zoom range (SGS4 Zoom: 10x vs Galaxy Camera: 21x) as it’s still more than enough to take on a most of the users’ needs, but we can’t quite wrap our head around why Samsung have to reduce the Aperture range.

Oh well, it seems like that’s a small drawback you have to live with if you’re planning to get one yourself. We’re just hoping that the use of a meeker processor, smaller screen and slower lens would make the Samsung Galaxy S4 Zoom a little bit cheaper than the Galaxy Camera during its initial release.