The world’s current situation undoubtedly hinders most people from fooling around, even if it’s April Fools. Although that doesn’t mean it is totally #canceled, as some tech brands still shared their April Fools entries anyway, and it’s hilarious. Well, there’s nothing wrong with that, though, as long as the joke isn’t insensitive and it didn’t hurt or offend anyone. Here’s the roundup of April Fools’ pranks and spoofs by tech-related brands this 2021. Now is your time to check them out and judge whether these brands’ jokes are a total hit or flop?

Wearables, nowadays, are indeed becoming more and more popular. As years go by, these smartwatches keep on improving in features. Meanwhile, Amazfit has shared a brand new smartwatch showcasing a giant screen, which the brand points to as a “giant step forward” in smartwatches. The brand introduces its biggest smartwatch ever, the Amazfit GTS 2 Maximus. It sports the maximum screen size one can ever have in a smartwatch yet. Amazfit also revealed in the video that this smartwatch can be disintegrated through an app in case the user ever lost it. That’s kind of terrifying! The GTS 2 Maximus, aside from its giant screen, also has various features, including over 70 sports modes, always-on AMOLED display, Sp02 measurement, heart rate monitoring, sleep quality monitoring, female cycle tracking, stress level measurement, and PAI health assessment system. Although, these features (minus the exaggerated screen size) are present in Amazfit GTS 2 mini. But, who knows, maybe soon, this giant-screen smartwatch, despite being odd, could come into reality. 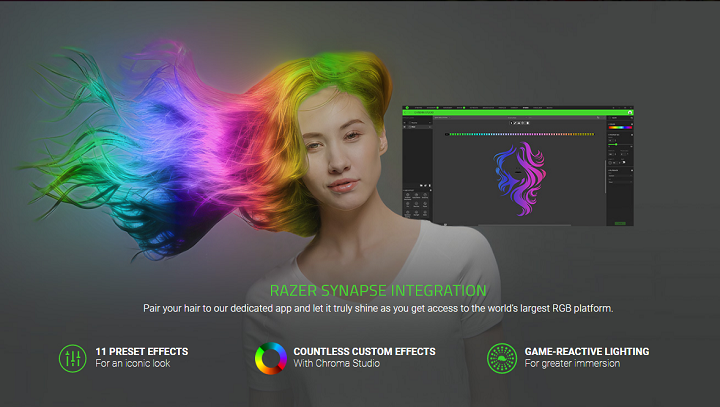 As a hair dye, this would be applied directly onto the hair. After rinsing off, the hair would then appear as a discoverable device on the Razer Synapse app. And, voila, customize your hair color all you want! Razer also mentioned that a RESPAWN version that promotes hair growth is coming soon. One thing is sure; if this hair dye ever comes to market, this would definitely be sold out in a snap. Yup, shut up, and take my money!

Is minimalist your style? Here comes Logitech’s G195 ManyKeyLess Gamer’s Essential! It is geared with only the essential keys gamers need, including WASD, space bar, and the an-auto quit button. What makes it more hilarious is the presence of the dual GG keys. Imagine, you’ll have to press each button instead of double-clicking one key! Wait, but this is still incomplete, though. The E and Z keys are also missing! It’s a good thing that this Logitech device would never come available in stores, as this would still need to be further innovated.
What do you think, gamers? What keys they still need to add on?

Remember Epic Games’ MetaHuman? The MetaHuman Creator is Unreal Engine’s browser-based app that empowers game developers and creators of real-time 3D content to build digital humans in less than an hour while keeping the highest quality level. This time, Unreal Engine unveils the next-generation MetaPets. This is said to unleash potential, as well as see the “pawsibilities” through the new MetaPet Creator. As per Unreal Engine, Meta Pets is as easy as a walk in the park. This actually sounds pretty cool! Unreal Engine could consider making this real, and many people might love it too. This Unreal Engine-powered prank was made possible with the help of the 3D artist Jelena Jovanovic.

Another tech innovation for pets uncovered on April 1st is Spigen’s Tough Armor K9 Edition. Spigen is a mobile phone accessory maker that makes cases, screen protectors, and other accessories for various smartphones. Who says tough armor protections are only for gadgets? This time, the product that the company introduces would give pets a new chew toy that they cannot ever destroy. I personally approve of the idea, as there might no slippers would ever be damaged at home if this truly exists.

Satechi launches its nearly indestructible mouse, the Satechi Cybermouse. The Cybermouse is built with bulletproof Super-Tough 2077 aluminum made for superior strength and endurance. It boasts a similar design as Tesla’s Cybertruck. It features solar and wireless charging, three ambient LED lights, and a rechargeable EV battery. Priced at USD 199.99, this device, despite its cool gaze, is surely one expensive mouse! Nevertheless, everything about Cybermouse could be ideal for some people, but this is the brand’s April Fools entry.

XTREME Appliances goes extreme as it offers not only one but four products for April! XTREME’s upcoming lineup includes the XTREME Robobutler, 100-inch XTREME X-Series Android TV, XTREME Gaming Laptop, and XTREME PhoneDrone. The idea of launching these products is actually great! XTREME fans on Facebook even loved it. But the lineup, including that flying phone drone, is too good to be true (for now). Go on, XTREME; we’re still waiting for the punchline.

realme’s Meow also has lots to offer this early April! It includes Meow VR Glasses, Meow Book, and Meow AI Speaker. Each product’s tagline is also rhyming and clever. “To see what I see,” “Your next book must be MeowBook,” and “I hear you. I always do” are hilariously catchy too. The brand, however, has mentioned in a comment that they may really mean this! It’s for you to decide whether you’ll believe it, though.

That sums it up! Those are some of the April Fools’ pranks and spoofs by tech-related brands this 2021. How about you, have you also spotted one? Please share it with us by leaving a comment down below.