Everyone’s told that Apple will be holding an event this September 10 to finally reveal new devices. However, it seems that aside from the iPhone 5 successor, we might also be looking at a few more surprises like the alleged iPhone 5C. Read on to see everything that we think we know about Apple’s soon-to-be-announced iProducts. We haven’t seen leaks or reports of an iPhone 6, and if we follow Apple’s launch cycle – we’re definitely looking at an iPhone 5S soon. Apple retained the same design when they went from the 3G to the 3GS and from 4 to 4S, and it’s highly likely that the next iPhone will follow this said pattern. The differences however will be seen elsewhere. For so long now, smartphones have been stuck on 8, 16,32 & 64GB internal storage options. Just lately, Apple upgraded the memory of their 4th-gen iPad to 128GB, so we’re guessing the company might do the same for the next iPhone. After all, insiders have already claimed that it will.

iPhones never fail to improve their cameras in every iteration. With the iPhone 5S, reports are looking at an improved f2.0 aperture which will take low-light performance a step higher. On top of that, a lot of leaked parts have already hinted at a dual LED flash.

Fingerprint scanners aren’t a new thing in the smartphone market as we’ve already seen it in phones like the Motorola Atrix, but after that, the trend seemed to have died down. A lot of reports and analysts are now claiming that the iPhone 5S will definitely feature the said scanner, replacing the concave home button with a convex one.

Black has been very much a standard color to phones, and Apple is very well known for making white a norm for them as well ever since the iPhone 4. It is possible now that they’re fixing up a 3rd color option. Leaked volume buttons and back panels have already pointed towards this – and it is expected that we will have a champagne gold iPhone 5S to be announced soon. 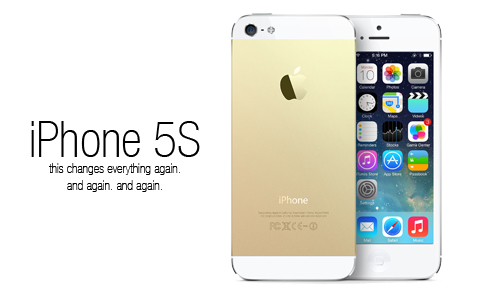 Of course, iOS 7 will be seen here no doubt. The chipset however, will be an improvement to the A6X — the A7, which will be coupled with 1GB RAM. No one is sure if NFC will make it to the next iPhone though. Together with the aforementioned iPhone, Apple is also expected to release another variant — the iPhone 5C. Now, what ‘C’ stands for is unknown (color? cheap? polyCarbonate?), but speculations are saying a lot more than just that.

The backplate of the iPhone 5C is probably one of the worst kept secrets ever, since by now we already know that it will be made out of glossy plastic & it will be available in many colors. So far, we’ve seen light colors of red, green, blue and yellow, including white.

Just like the iPad Mini, it seems like Apple is planning to reuse their old internals on their new phone. This time it’s on the iPhone 5C. Reports say that the phone will run the 4S’ 8 megapixel camera & dual-core CPU, although that remains to be confirmed. We’ll have to wait and see.

On top of everything that we’ve gathered about the iPhone 5C, all of those setbacks in specs and construction is a likely price reduction, probably by as much as $200 to $250 of the flagship model.

September’s going to be a busy month for tech sector as we are nearing the Christmas season. Next month, we’re also expecting phones like the Sony ‘Honami’ and the Galaxy Note 3. In Apple’s camp, on the other hand, that’s all we’ve heard about; not much word on the iPad Mini 2 and the 5th gen iPad.

So, which one are you waiting for?