Huawei MatePad vs Samsung Galaxy Tab S6 Lite: Which 10-inch tablet is for you?

Huawei MatePad vs Samsung Galaxy Tab S6 Lite: Which 10-inch tablet is for you?

Android tablets are picking up again, thanks to new offerings from big manufacturers like Huawei and Samsung. The former released the MatePad, while the latter released the Galaxy Tab S6 Lite. Both pack 10.4-inch screens, octa-core CPUs, 4G LTE connectivity, large batteries, and pen support. Given the specs of these tablets, they look like great devices for multimedia consumption, casual artwork creation, and online learning devices. The question now is, which one to get? Find out below. 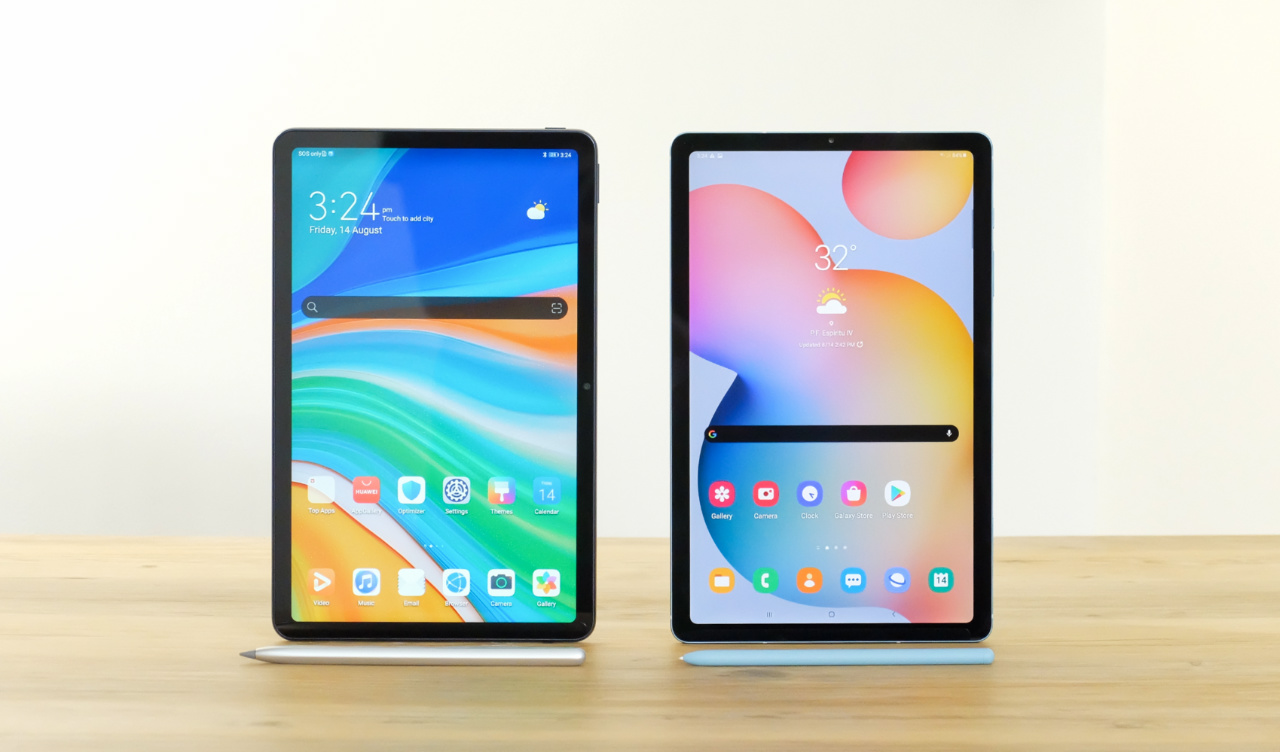 For this comparison, we’ll be diving into these nine categories: 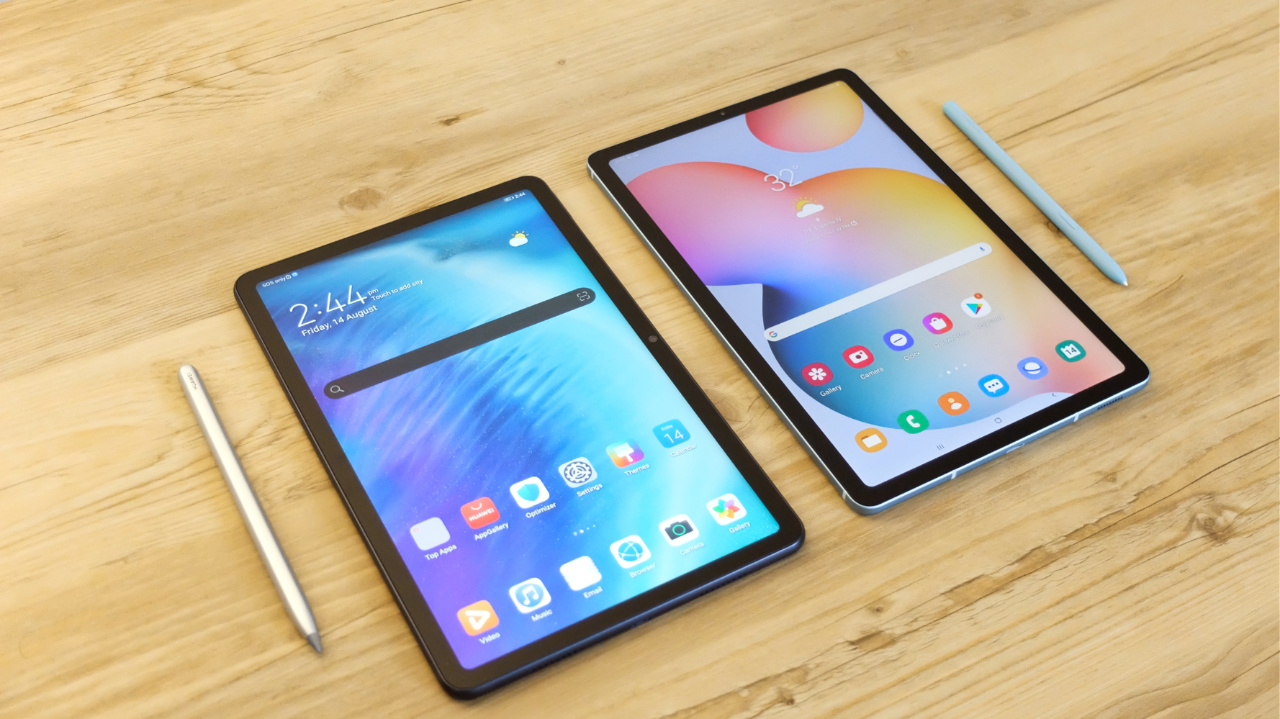 Tablet design over the past few years has been relatively dull as they look like bigger and wider versions of old smartphone designs. Perhaps the most significant change you’ll notice about the newer tablets is that they sport slimmer bezels. However, that is not to say that the Huawei MatePad and Samsung Galaxy Tab S6 Lite look boring. They’re good-looking devices with nifty functions to back them up. 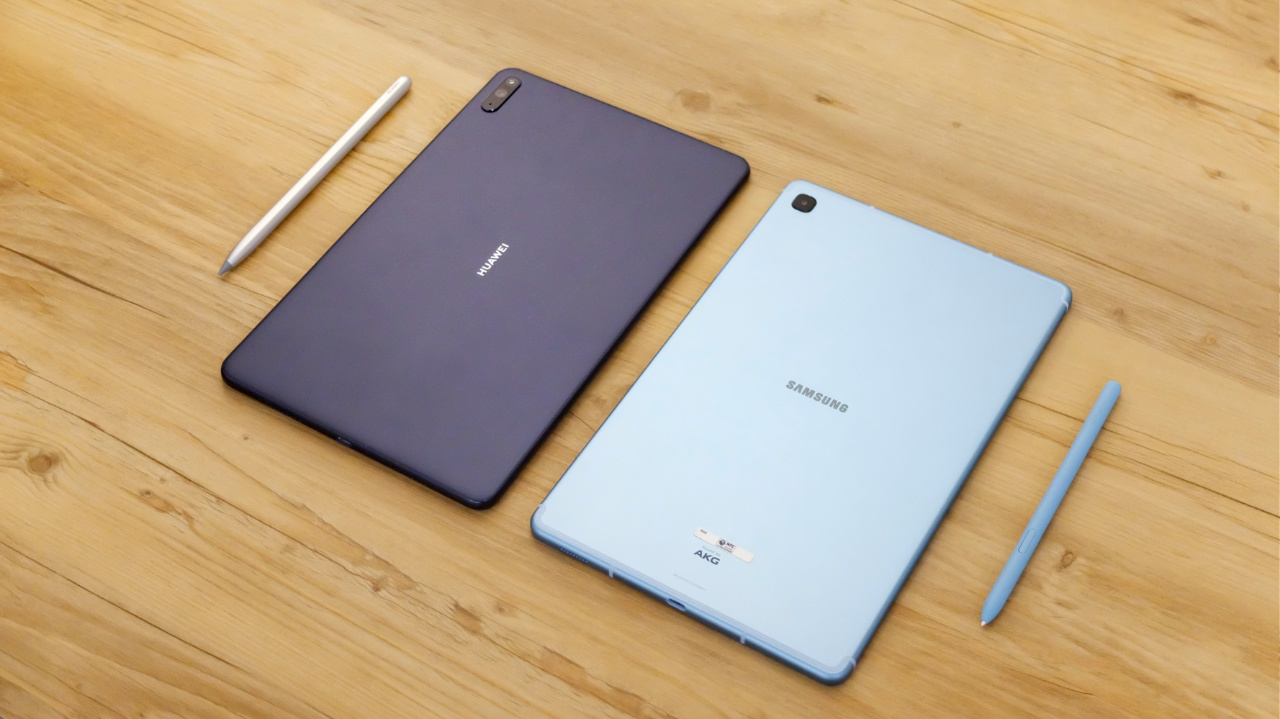 Starting with the Huawei MatePad, this device sports an aluminum body with a matte coating that can resist fingerprints and smudges. The sides are rounded, so it’s comfortable to grip. In the portrait orientation, it has the power/lock button and two speakers at the top. 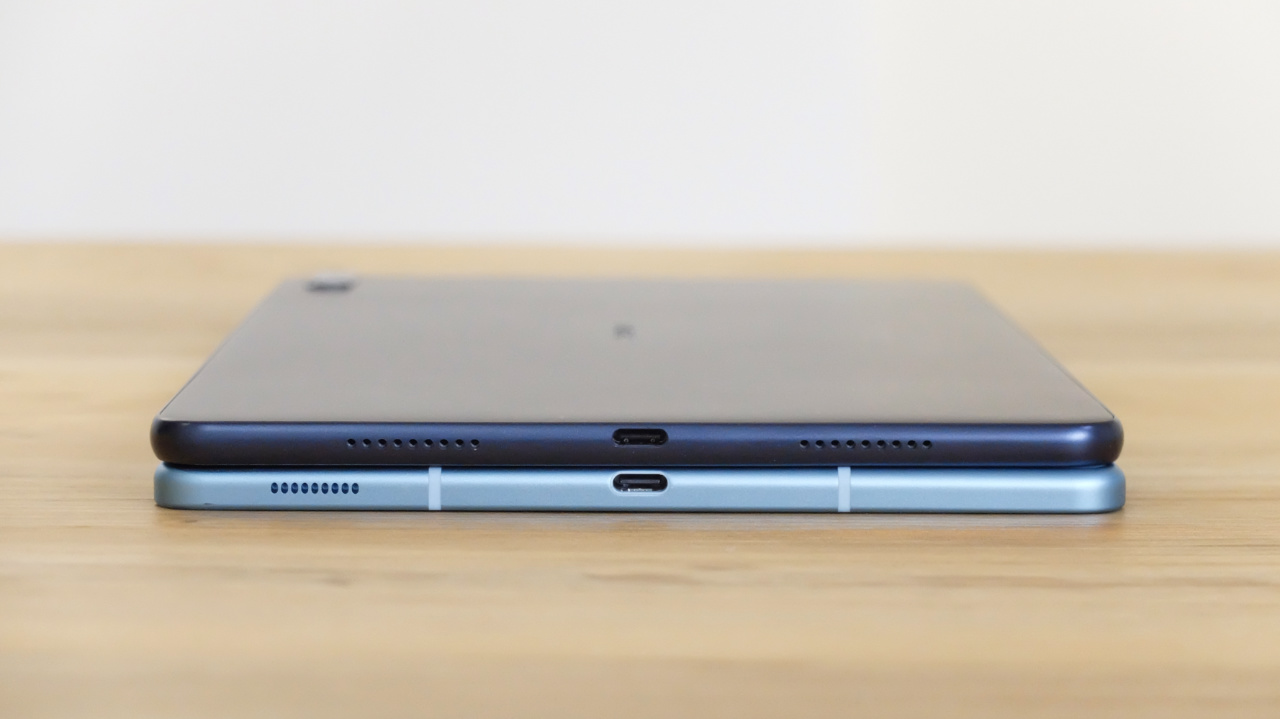 Down at the bottom are the USB Type-C port and two more speakers, giving us a total of four loudspeakers.

On the left, we have the tray for the SIM card and microSD card, while on the right side is the power button and quad microphones.

At the back is the protruding camera module with LED flash and microphone. 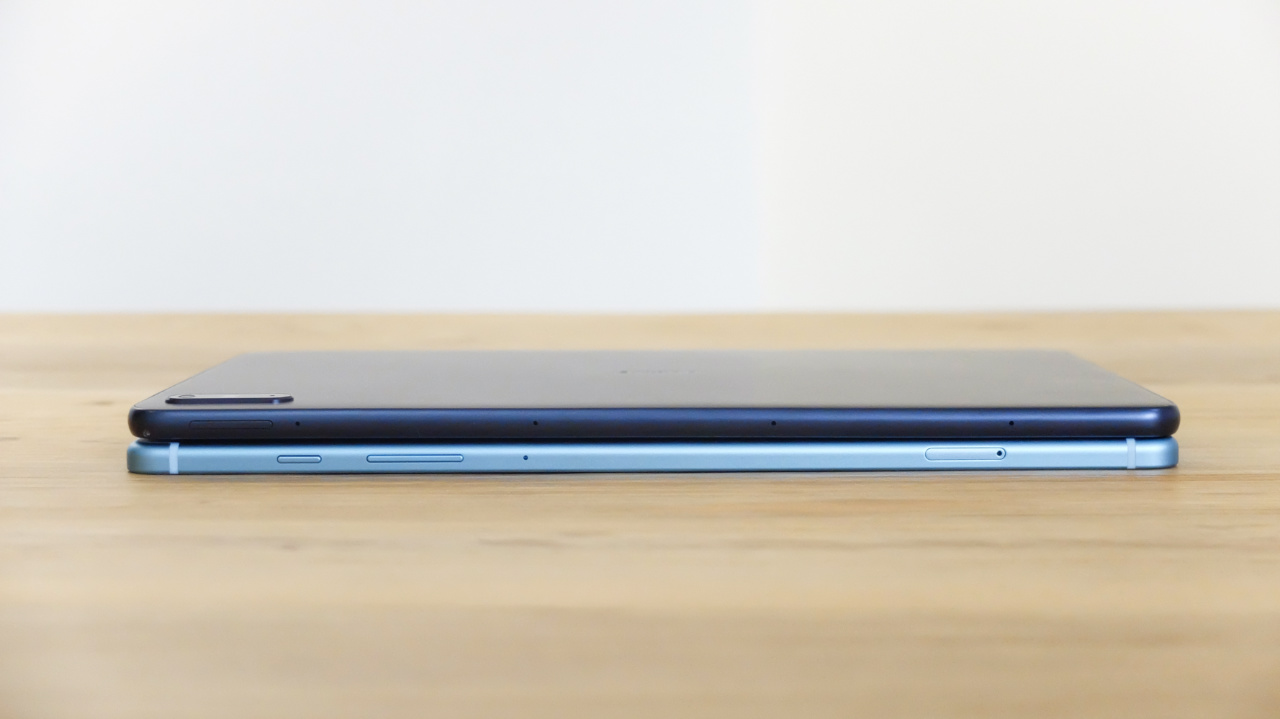 For the Samsung Galaxy Tab S6 Lite, it also has an aluminum body with a matte finish, so fingerprints and smudges won’t bother you here as well. Its sides are flatter, though, compared to the MatePad, but still comfortable to hold.

Looking at the ports, up top, it has the 3.5mm headphone jack, microphone, and loudspeaker. 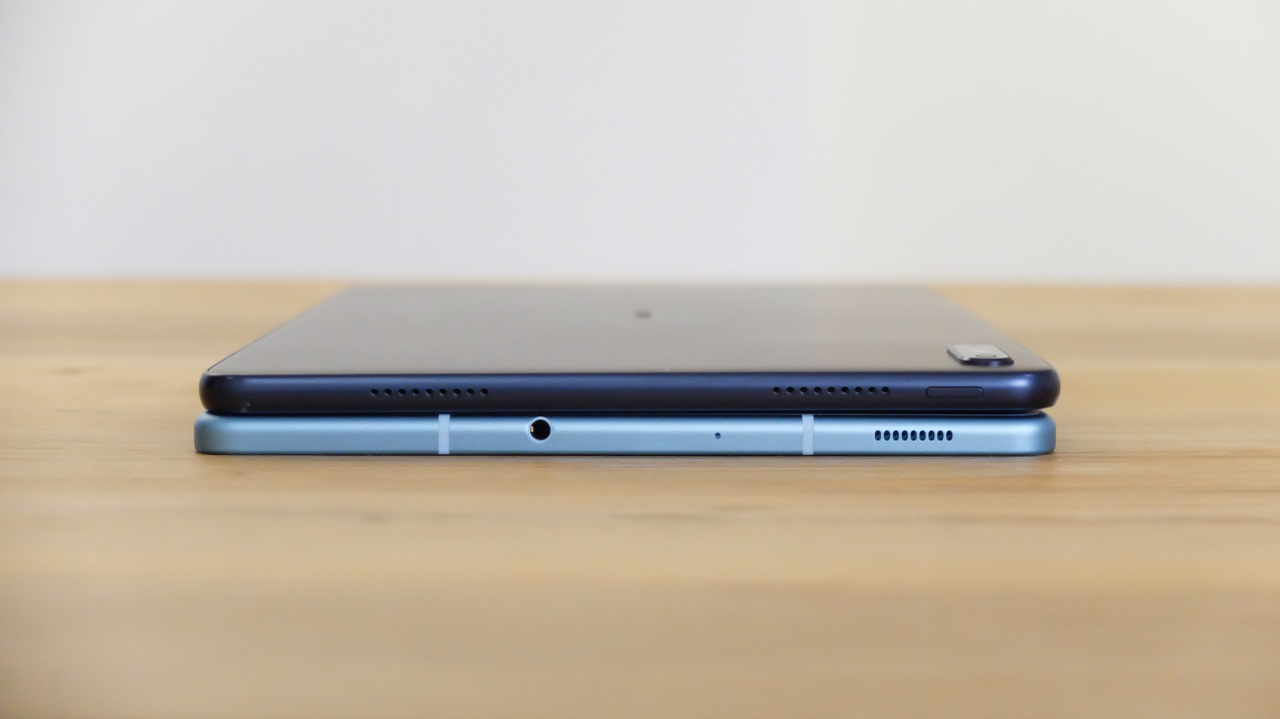 At the bottom are the USB Type-C port and another loudspeaker.

There’s nothing on the left, but on the right are the power/lock button, volume buttons, another microphone, and tray for the SIM and microSD card.

At the back is the protruding camera module—no LED flash or microphone. Another thing you’ll notice about the Galaxy Tab S6 Lite is the visible antenna lines on the frame. It’s not bad, but not a pleasant sight if you’re picky and don’t like seeing these things on your device. 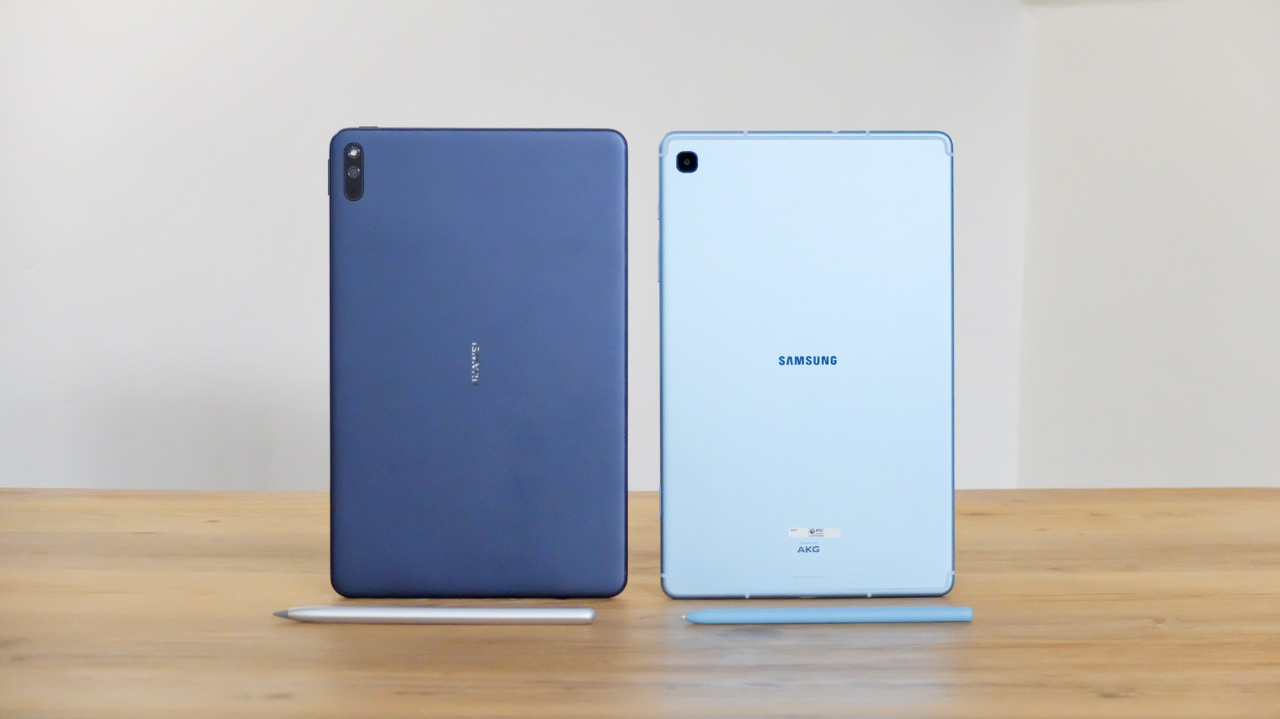 In this aspect, it’s a bit difficult to determine which looks better. Both are premium, comfortable to hold, and portable. So, I’ll give points to both.

This is probably one of the most important aspects of a tablet as these devices rely on large screens for its functions, like watching videos, video conferencing, and doodling. Both have 10.4-inch screens with 2000 x 1200 resolution at 224ppi. For the panels used, the Galaxy Tab S6 Lite uses a TFT LCD, while the MatePad uses an IPS LCD. While the IPS panel offers some improvements over TFT, I don’t see much different from both devices when it comes to quality. Both have punchy colors, good viewing angles, and around 81% screen-to-body ratio. However, I noticed that the MatePad is brighter. The display is als oTÜV Rheinland Low Blue Light certified for eye-friendly ebook reading. What will probably tip the scales towards the MatePad more is the Harman Kardon quad-speakers for a more immersive listening experience. While the Galaxy Tab S6 Lite has powerful speakers tuned by AKG with loud and crisp sounds, we find the audio experience in the MatePad to be fuller and more immersive. It also has quad-microphones so it can easily pick up audio, which is essential when in a video conference.

In this aspect, I’m picking the MatePad. 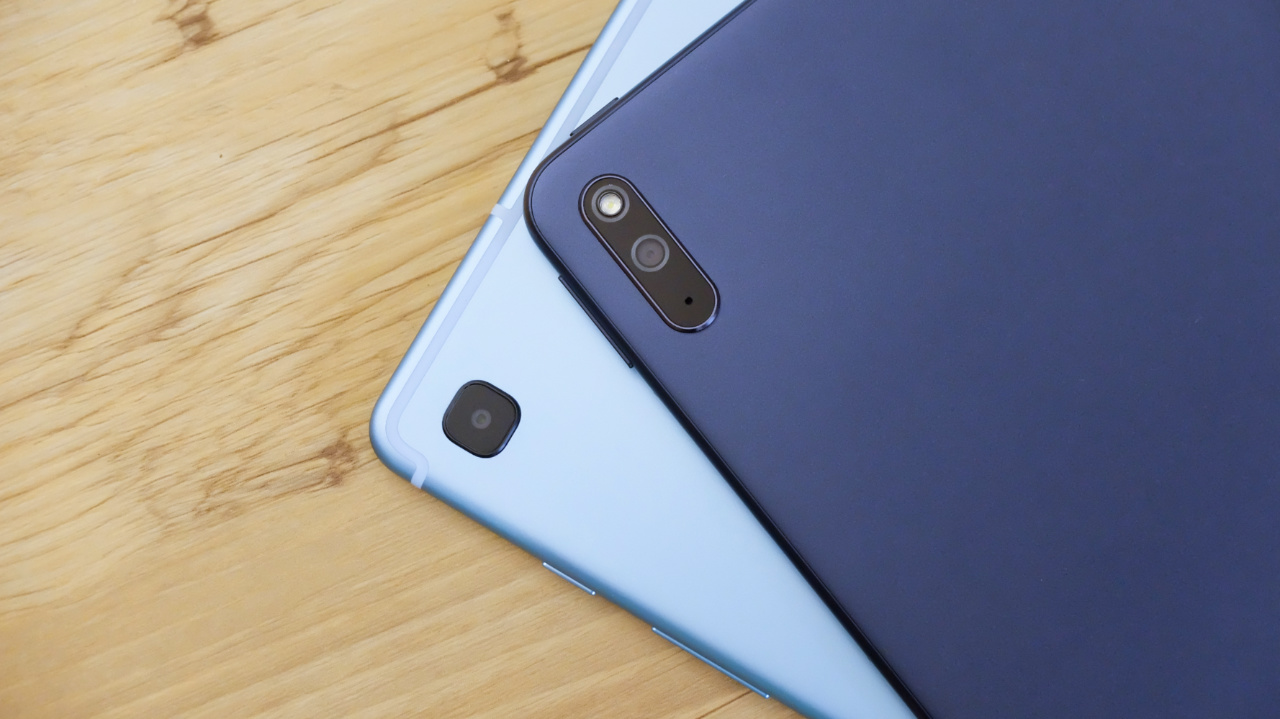 For the camera quality, it’s a mixed bag. The MatePad’s shot is brighter and punchier colors but tends to washout. It’s also prone to blur when shooting indoors. The Galaxy Tab S6 Lite, on the other hand, has sharper images when it comes to indoor shots and has a good white balance.

In this case, I’m putting a point on the MatePad.

As you can see, the MatePad scored higher than the Galaxy Tab S6 Lite, which makes it the better device if you’re planning of running resource-intensive apps.

For the RAM, both units have 4GB, which is a good capacity to handle multitasking and plenty of background applications. Both are tied in this aspect.

The MatePad is equipped with a 7,250mAh battery with an 18W fast charge, while the Galaxy Tab S6 Lite has a 7,040mAh battery with a 15W fast charge. The MatePad wins in terms of capacity, but how about battery life? We ran our video loop test on both devices, which involves playing a 1080p video on loop in Airplane mode with 50% brightness, and volume with headset plugged in, and the MatePad was able to provide 19 hours and 30 minutes of playback. The Galaxy Tab S6 Lite got us 12 hours and 42 minutes. The MatePad wins this round.

The MatePad runs on EMUI 10.1 based on Android 10. It doesn’t have Google Mobile Services and instead relies on Huawei Mobile Services with exclusive features like Huawei Share, Huawei Share OneHop, and Multi-screen Collaboration, which are nifty features if you already own other Huawei devices like smartphones and laptops. 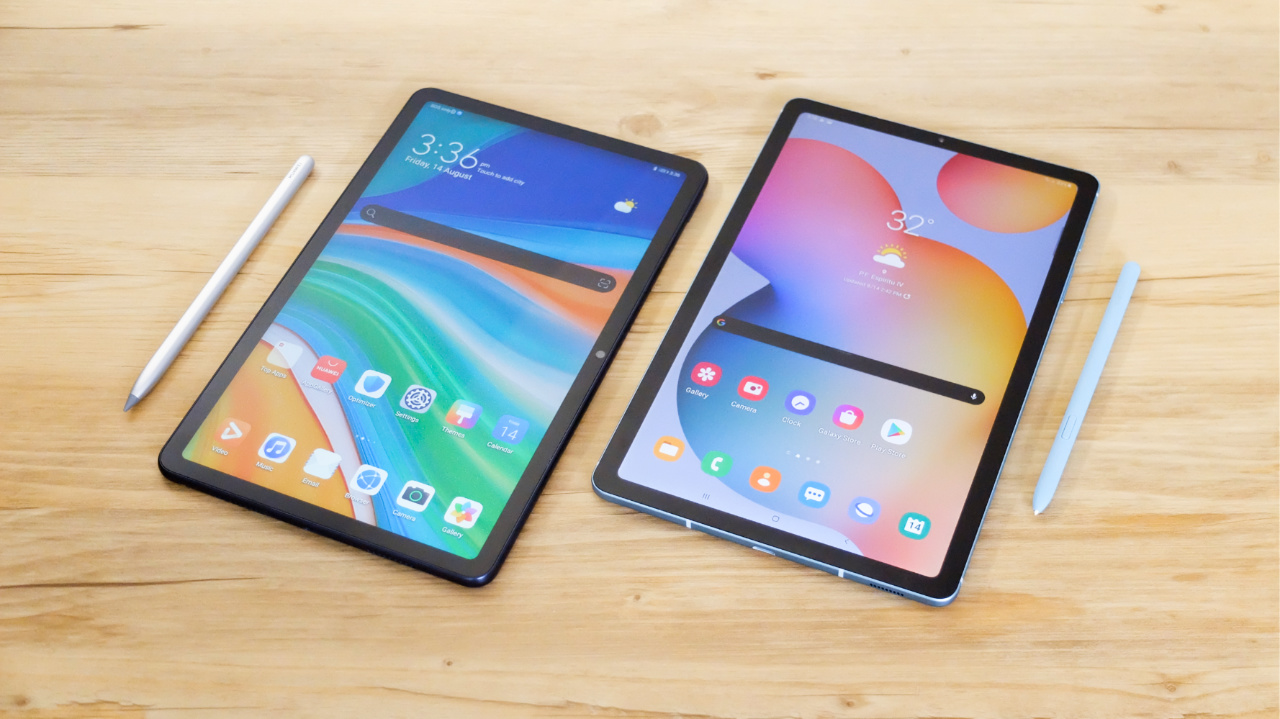 For apps, Huawei uses the AppGallery instead of the Google Play Store. Popular apps are already available in the marketplace, while 90% of top apps are already working on Huawei devices like Microsoft Office, MX Player, VLC, iFlix, iWant, Viu, and Wattpad. Users can choose to sideload their apps or use third-party app stores like APKPure, APKMonk, or Aptoide. To make it more convenient for users to search for apps, there’s the Huawei Petal Search Widget, which is a search engine for apps. Just type the app that you want, and it will search the web for the APK for you to install. EMUI 10.1 will also check for the integrity of the application to make sure that the app is safe for installation. If problems occur, users can get support by calling the Huawei hotline.

If you need to use Google services like Gmail, Google Photos, and YouTube, they’re still accessible via the built-in browser.

For the Galaxy Tab S6 Lite, it runs on OneUI 2.1 based on Android 10. Unlike the MatePad, this one has Google Mobile Services, meaning the Google Play Store and other Google apps will run on this device, so there’s no need to sideload. It also has the Galaxy Store if you need a second marketplace to look for apps. Other features include Samsung Knox to handle its security and Samsung Flow for easy interaction with the device and your Windows PC.

The MatePad uses the Huawei M Pencil with a hexagonal design and features 4,096 levels of pressure sensitivity and high tilt sensitivity. To handle its note-taking features, the MatePad has a built-in Notepad app and Nebo for Huawei. 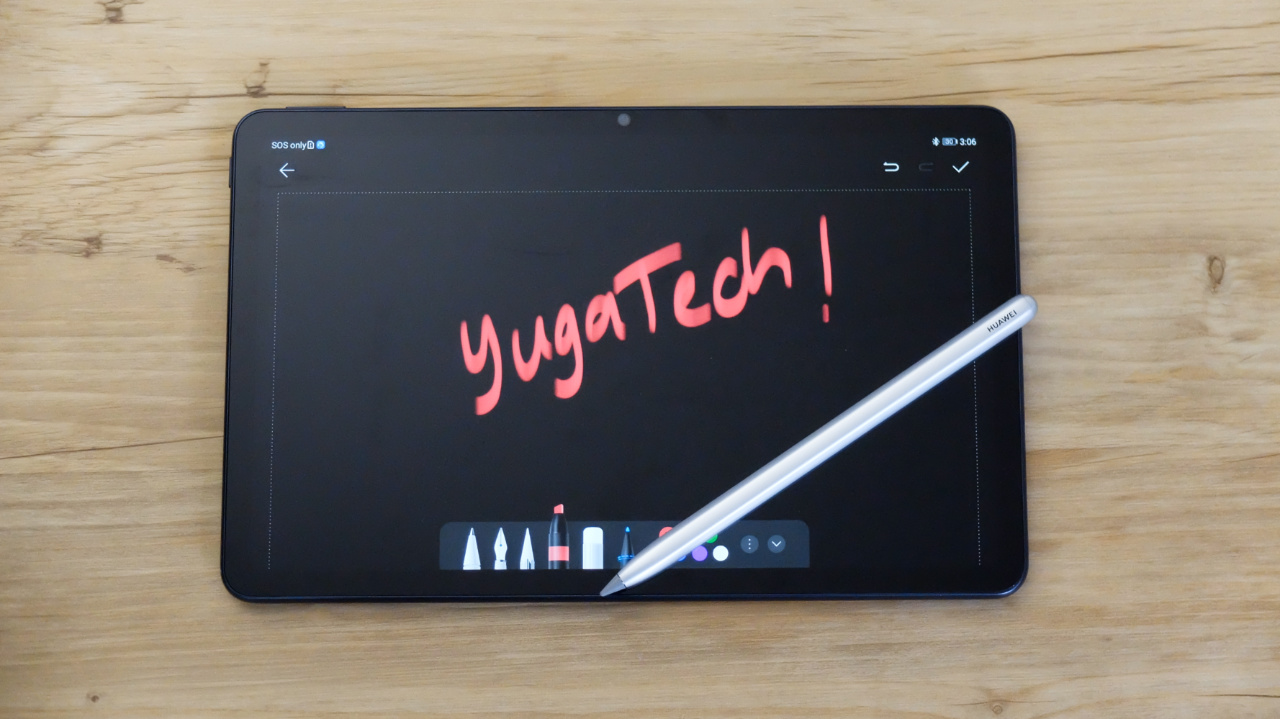 For the Galaxy Tab S6 Lite, it comes with an S Pen out of the box with a rounded body that can cling to the tablet or the folio using magnets. It also has pressure and tilt sensitivity, although Samsung didn’t disclose the levels. It has more robust note-taking features since the S Pen has been around for a while, and that includes Samsung Notes, PENUP, Air Commands, Air View, Screen off memo, AR Doodle, Live messages, and Screen write. 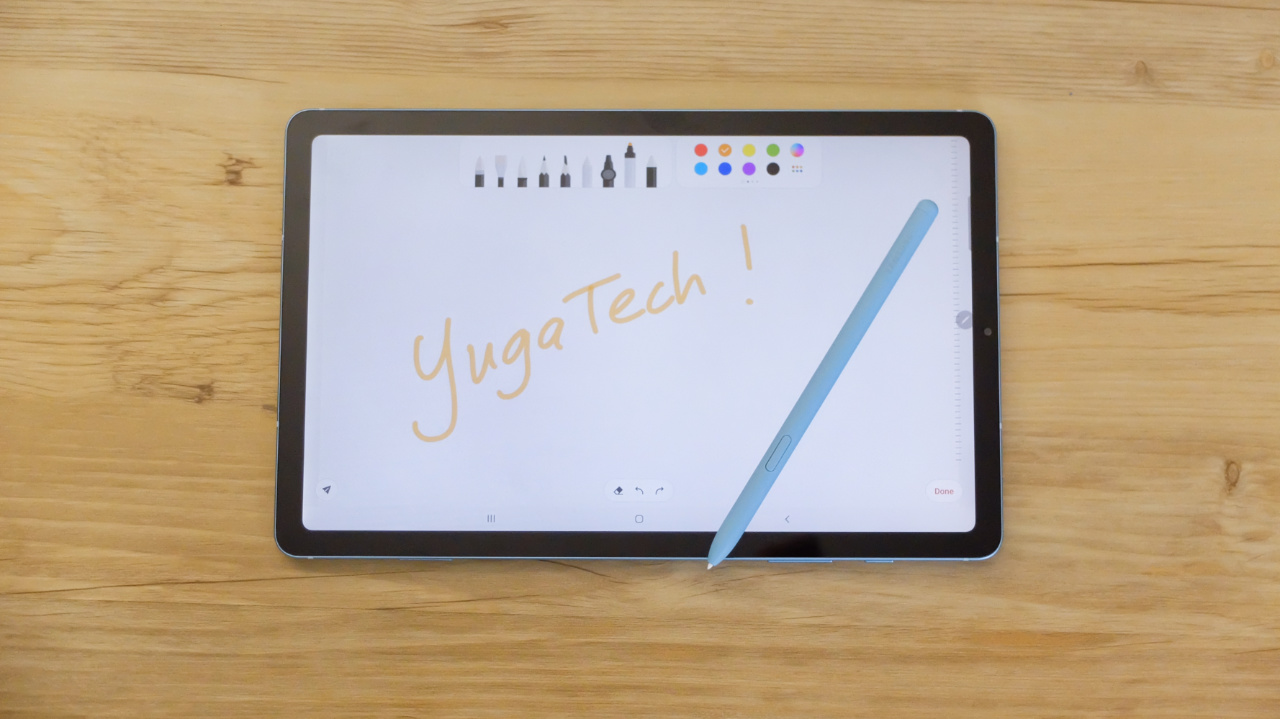 If you’re already invested in the Huawei ecosystem, you should be fine with the MatePad. However, given the built-in Google services and solid note-taking features, the Galaxy Tab S6 Lite wins this category.

Let’s do a recap: 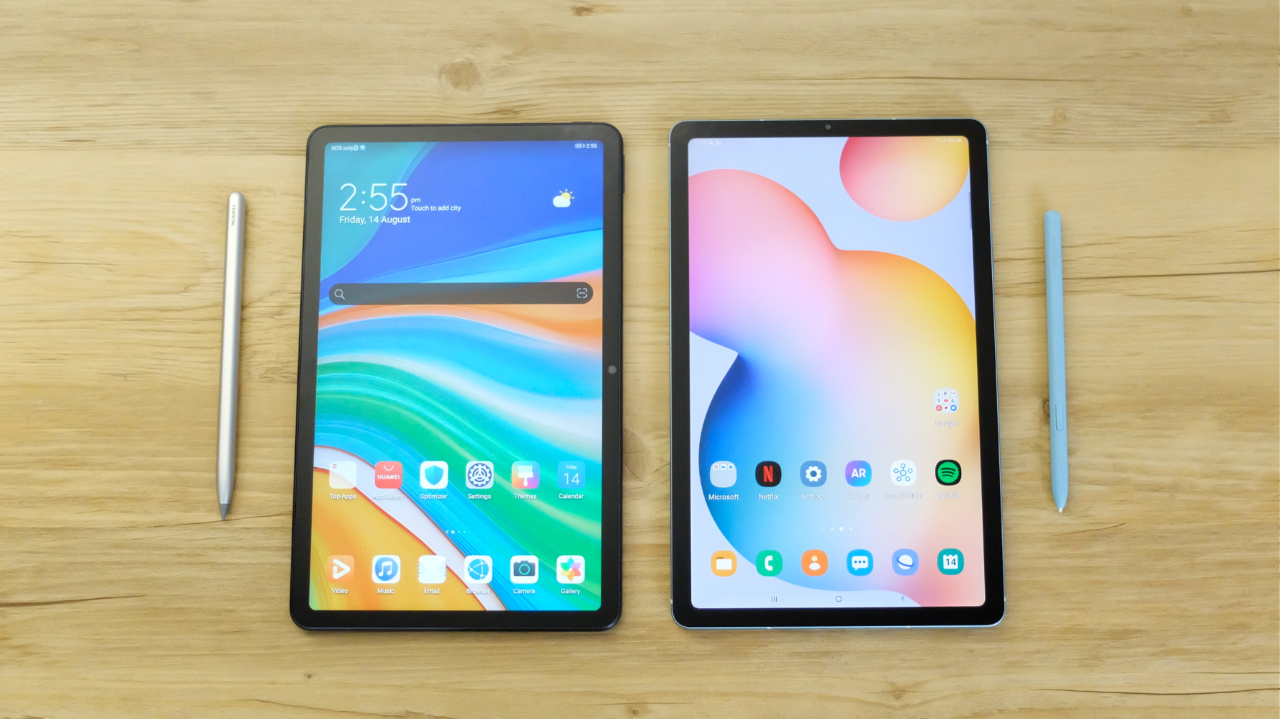 The Huawei MatePad scored 7 out of the 9 categories, while the Samsung Galaxy Tab S6 Lite got 4 out of 9. That is not to say that the Galaxy Tab S6 Lite is a bad device, it’s actually a good one, especially if you’re looking for a tablet with a nice display, good speakers, large storage, GMS support, and more robust note-taking features. But if you’re looking for something similar features but better multimedia capabilities, performance, and battery life, at a much lower price, the MatePad is the one to get.