Samsung, of all smartphone manufacturers, should know how awful a 5-inch display looks when it’s paired with a WVGA (800×480) resolution. But its seems that there’s no stopping the South Korean tech giant these days, as they still announced their latest creation, the Samsung Galaxy Grand (i9080 and i9082).

Just to put things in perspective of just how horrible this combination can be, you can check out our review of the Lenovo S880 which has the same display configuration of this upcoming Galaxy smartphone. 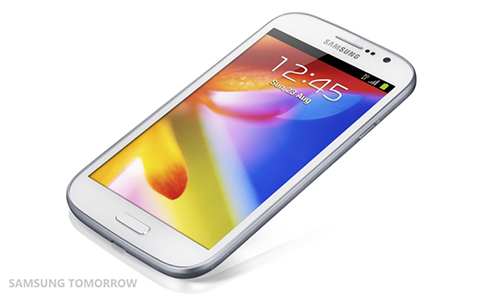 Display aside, the Galaxy Grand will be available in single and dual-SIM model which explains the two model numbers mentioned above. The handset is packed with an unspecified 1.2GHz dual-core which is backed by gigabyte of RAM. Storage-wise the phone will have an 8GB internal storage which can be expanded should you feel the need to do so.

It will have an 8MP camera on the rear which is paired with a 2MP “HD Camera” at the front. Powering all of its components is a sizeable 2100mAh Lithium-Ion battery. 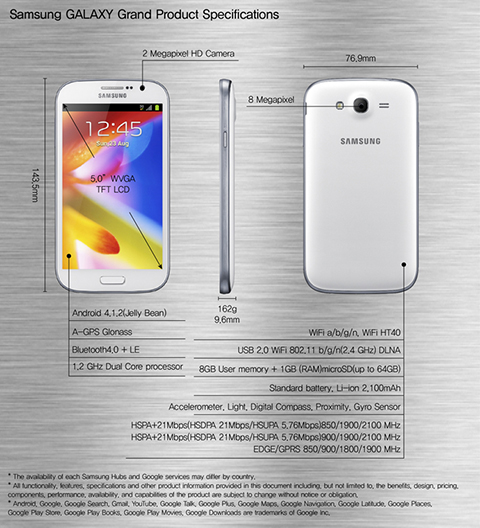 The handset will come preinstalled with a Samsung-skinned version of Jelly bean (Android 4.1.2). In addition to the TouchWiz UI, Samsung also equipped the phone with tons of proprietary customizations and add-ons that are found in their flagship devices (Galaxy Note 2 and Galaxy S3) which includes Multi-Windows feature, Pop-up Video and many others.

There’s still no word when the Galaxy Grand will make its debut and how much it’ll cost once it does, but judging from its mid-range specs and uninspiring display, we think that Samsung will sell this phone at around the same price as the recently announced Galaxy Premiere (i9260), maybe even cheaper. But even if they priced it a little cheaper than its smaller sibling, Sammy will still have a hard time competing against dual-SIM phones in the local market.

Update: The Samsung Galaxy Grand has recently been launched in India and retails for INR21500 or roughly Php16,200. Local of launch of the handset remains to be known, but we’ll inform you once it hits our shores.