The Honor smartphone brand is having a good run in the Philippines lately, releasing new devices that offer decent specs at competitive prices, Leading the pack is the Honor 10, which seems to have its sights on one of Huawei’s flagship smartphones, the P20. Given the price difference, is the Honor flagship the best option? Find out in our review.

If the design of the Honor 10 is familiar, you’re right. That is because it looks similar to the Huawei P20. It has a 5.84-inch display on the front that is mounted with 2.5D glass, and a notch that houses the earpiece, sensor, 24MP front camera, and LED notifications. 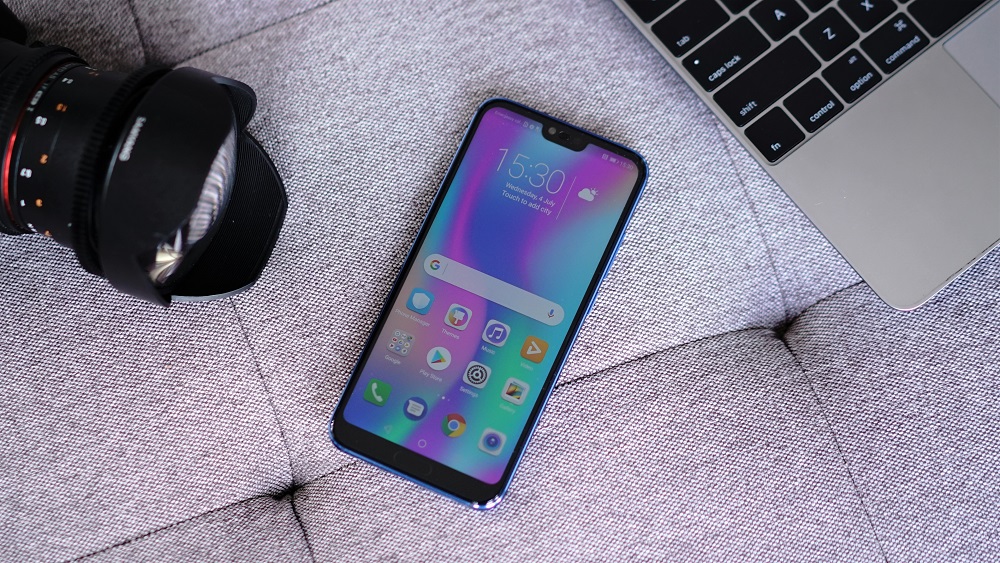 Down below is the under glass fingerprint scanner which is a nice implementation since it provides a seamless, all-glass feel at the chin of the device. It’s almost invisible, but Honor printed tiny dots around it to give the user an idea where the scanner is. So far, it works great and can recognize our prints even with the slightest touch.

The Honor 10 sports a metal frame that has the dual-nano SIM tray on the left, the clicky yet firm volume and power/lock buttons on the right; the IR blaster and secondary microphone up top; and the 3.5mm audio port, USB Type-C port, and loudspeaker at the bottom. Sorry guys, but a microSD card slot is not available.

Turning it on its back will reveal the protruding 16MP + 24MP dual-rear cameras and LED flash. As you can see, we have the Phantom Blue unit which is a cross between metallic blue and purple, depending on the angle. It’s a fingerprint and smudge magnet, which is already expected given the glass, but Honor included a jelly case in the package which is nice.

The Honor 10 definitely looks and feels premium. The glass on the front curves smoothly towards the edges. The glass back, on the other hand, tapers to the left and right sides to emphasize the device’s thinness.

The metal frame is cool to the touch and features a thin chamfer for aesthetics and added grip. Although a tall device, the frame is narrow, which makes it easy to handle.

The Honor 10’s display can satisfy those who are looking for a good viewing experience. At 5.84 inches, it’s large enough for watching movies, streaming videos on YouTube or gaming. You don’t have to worry about the notch getting in the way as the content doesn’t extend towards it. You can also hide it by toggling a switch inside the Display Settings.

It also has a fine resolution at Full HD+ (1080 x 2280) or equal to 432ppi, which is more than enough to make pixels unnoticeable. Colors are punchy and accurate, the viewing angles are great, and the screen is vibrant enough to remain viewable outdoors. If there’s one thing we didn’t like about it is the noticeable bezels. It’s not that of a big deal but it’s thicker compared to the likes of the Huawei P20 or P20 Pro. 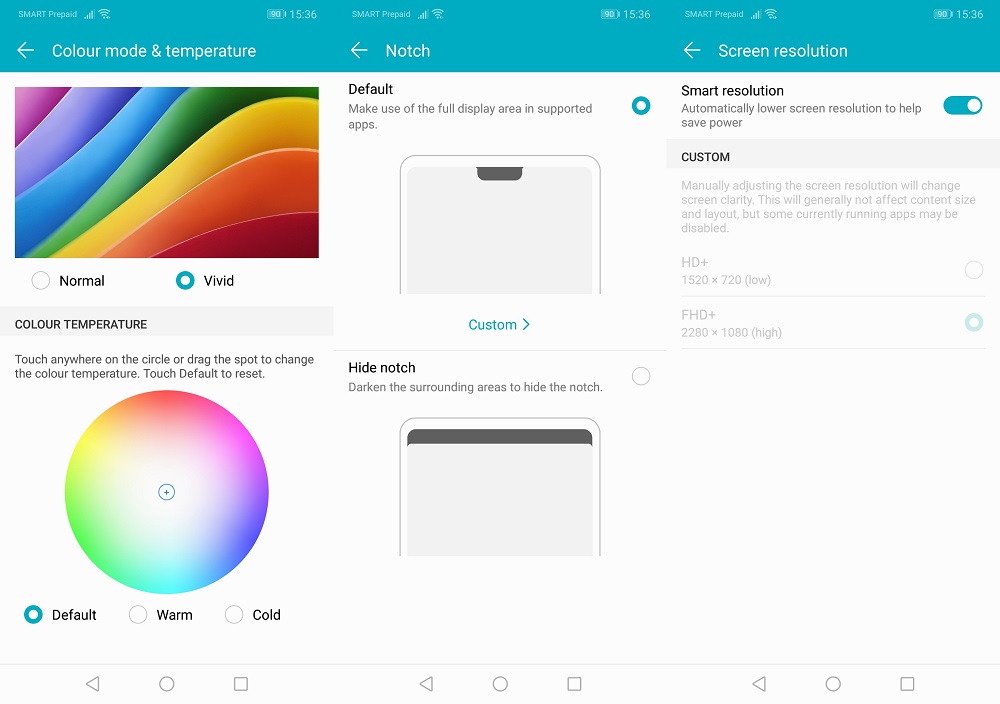 When it comes to audio quality, it’s loud and crisp, which is good enough for casual listening to Spotify and watching videos on YouTube. 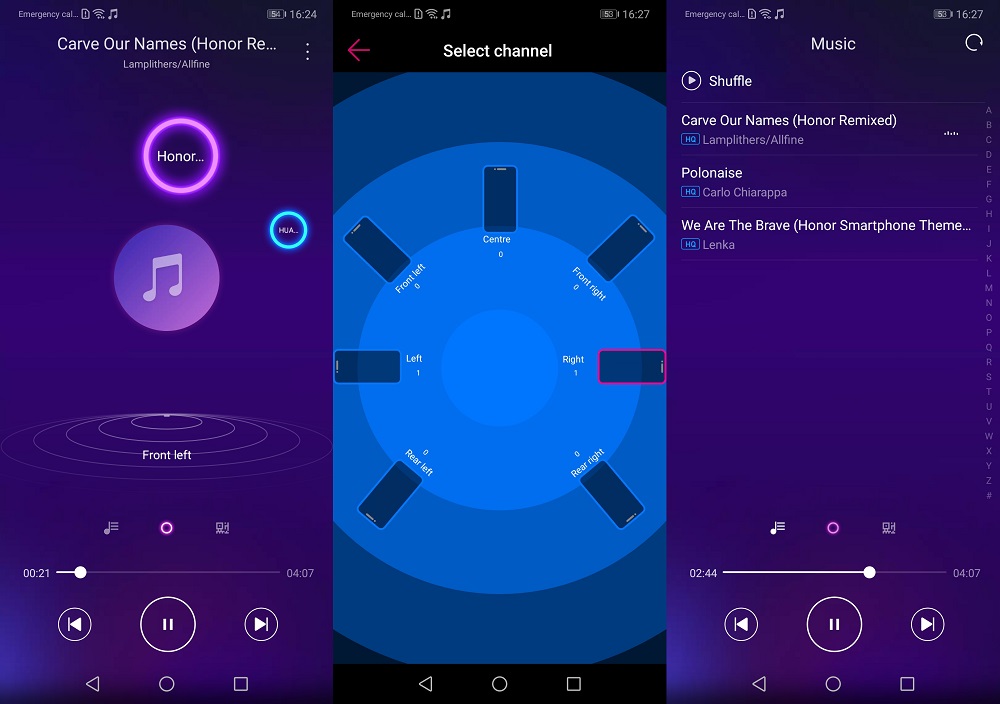 It doesn’t have a dual speaker setup like Huawei’s flagships but it has this feature called Party Mode which syncs music playback across supported Honor or Huawei phones on the same WiFi network to create a surround sound feel. The more phones connected to the network, the better the effect.

The Honor 10 uses a dual rear camera setup consisting of a 16MP RGB sensor and a 24MP Black & White. The front, on the other hand, uses a 24MP sensor. It has plenty of features like Portrait mode, Aperture mode, Night shot, Slow-mo, HDR, Pro, 3D Creator, Monochrome, and Light painting to name a few. It also has AR Lens for animated effects and backgrounds.

Quality is actually good as images come out sharp with punchy colors and plenty of details. Autofocus is also fast even in dim conditions. Low-light performance is also commendable as long as it has enough ambient light to play with.

It also features an AI photography mode which automatically adjusts the camera’s settings based on the subject. As a result, the images come out clearer with punchier colors. Check out the samples below.

In terms of video recording, the Honor 10 can shoot at a maximum of 4K resolution at 30fps in stereo audio and MP4 format. Quality is as good as the images with great dynamic range and plenty of details. There’s EIS on board but only works at Full HD 30fps so anything higher is prone to shakes. Watch the sample below.

The Honor 10 is running EMUI 8.1 which is based on Android 8.1 Oreo. If you have read our review of the Nova 3i, they almost have the same interface. Navigation is straight-forward as the apps are housed in multiple home screens. Swiping down from the top will reveal the shortcut keys while swiping to the left-most home screen will show SmartCare. 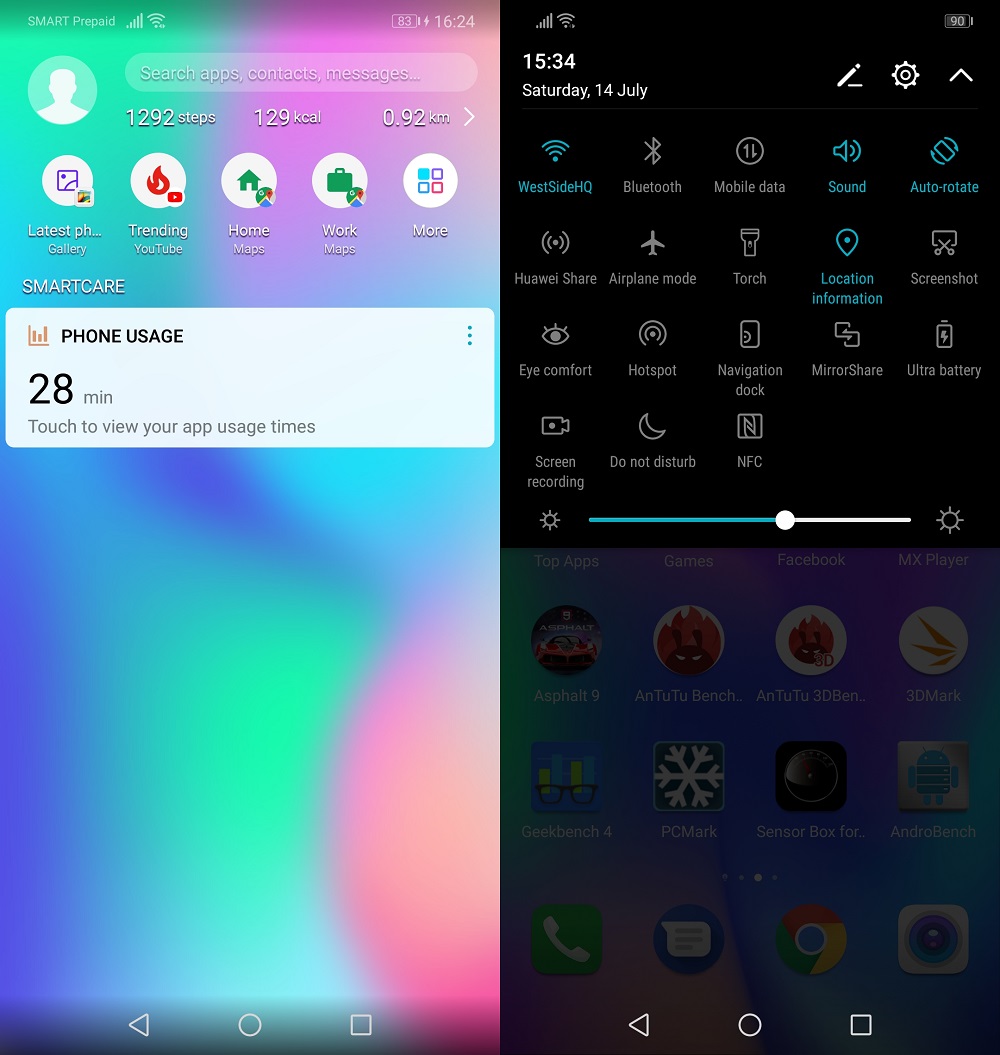 It comes with plenty of pre-installed apps like Instagram, Messenger, Netflix, Booking.com, Z Camera, as well as games like Spider-Man, Dragon Mania, Kingdoms, Puzzle Pets, and Asphalt Nitro. It’s annoying to find these things during first boot up as it’ll request updates once you launch the Play Store. The good thing is you can uninstall them. 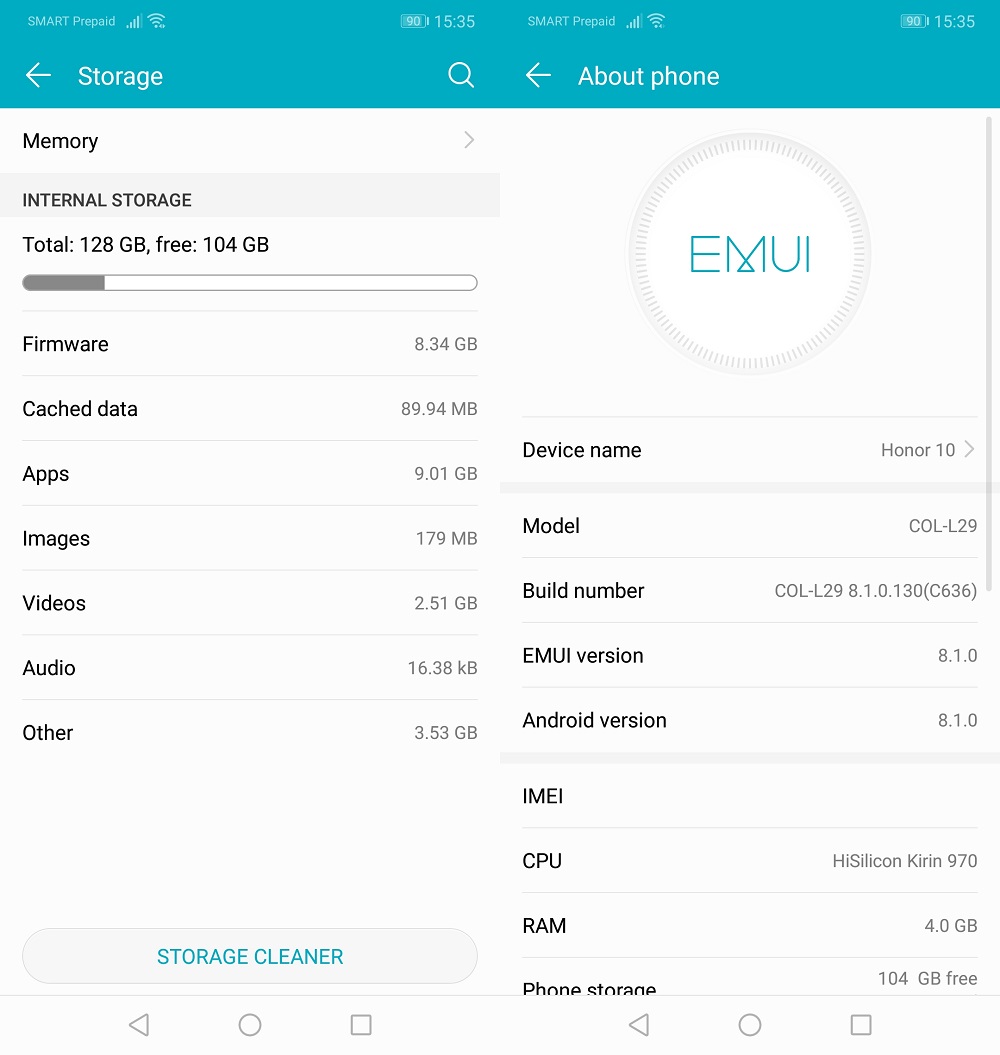 When it comes to storage, the Honor 10 comes with a huge 128GB of storage with 104GB left for the user. Unfortunately, it doesn’t support microSD cards.

The Honor 10 packs Huawei’s current flagship chipset, the HiSilicon Kirin 970, the same chipset that is powering the Mate 10, Mate 10 Pro, P20, and P20 Pro. It has a Mali-G72 MP12 GPU and 4GB RAM. With this kind of configuration, the Honor 10 was able to breeze through different tasks including launching apps, running biometrics, multitasking, and gaming. Warming is felt at the upper part of the device when playing games but not enough to cause discomfort. 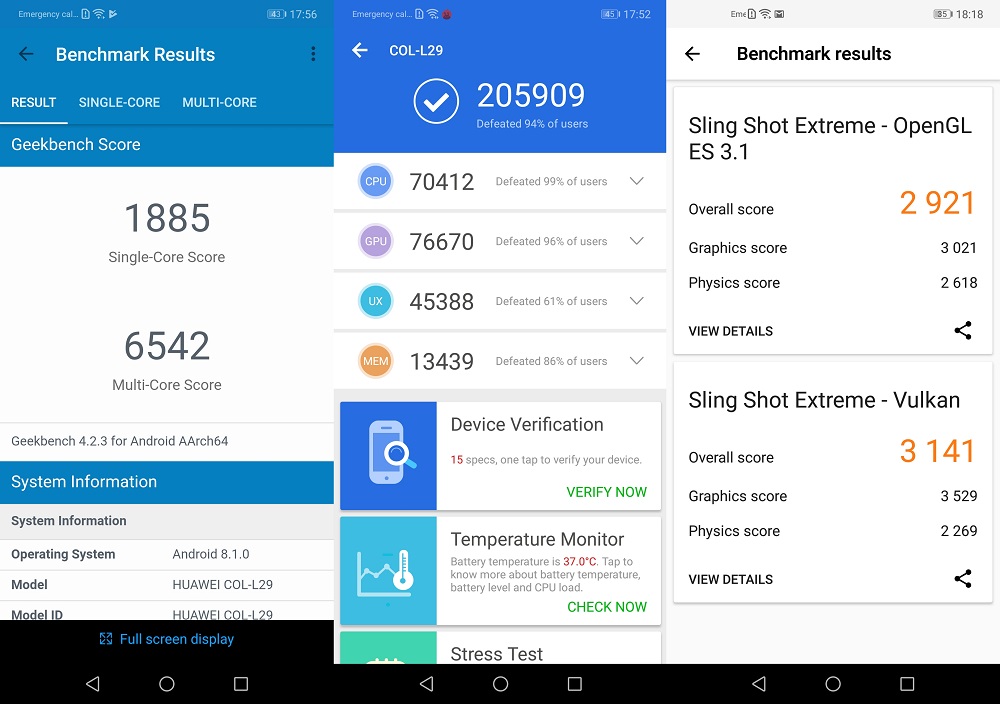 Check out the benchmark scores:

The numbers are close to what we got from the Huawei P20 Pro which means it’s good when it comes to overall performance. We can expect the experience to improve once the GPU Turbo update arrives.

In terms of connectivity, the Honor 10 packs the usual specs like Dual-SIM support, 4G LTE, WiFi, NFC, Bluetooth, and GPS. So far these features are all working well as mobile data is fast, calls are loud and clear, while GPS works fine with apps like Google Maps and Grab. The battery is on the average side and has the same capacity as the Huawei P20 at 3,400mAh. So far we got around 8 to 9 hours of use as long as we don’t go heavy on games and connected mostly on WiFi. Using PC Mark’s battery test, we got 8 hours and 37 minutes which is not bad (the P20 got 8 hours and 49 minutes), while our video loop test yielded 13 hours of playback, which is good.

It also supports Huawei’s SuperCharging tech and takes just 1 hour and 40 minutes of charging to fully replenish the battery.

The Honor 10 is an interesting flagship offering because of its similarities to the Huawei P20. They almost have the same screen size, design, chipset, RAM and storage capacity, and battery. Probably their biggest differences are the camera, as the Honor 10 doesn’t have Leica optics and has its own AI image processing and, of course, the price.

The Honor 10 is priced at Php23,990 for the 4GB RAM + 128GB model. Compare that to the Huawei P20 which is at Php34,990 and you have a Php11K difference. So if you’re looking for a smartphone that’s close to what the P20 can offer but don’t have that high budget, the Honor 10 should be more than enough to satisfy your needs.

What we didn’t:
* No microSD card support
* Slightly thick bezels
* Some pre-installed apps