Nokia is officially back in the international market, not just in China, with a trio of Android smartphones namely the Nokia 6, Nokia 5, and Nokia 3. In this comparison, we’re taking a quick look at what these handsets offer and how do they differ with each other. 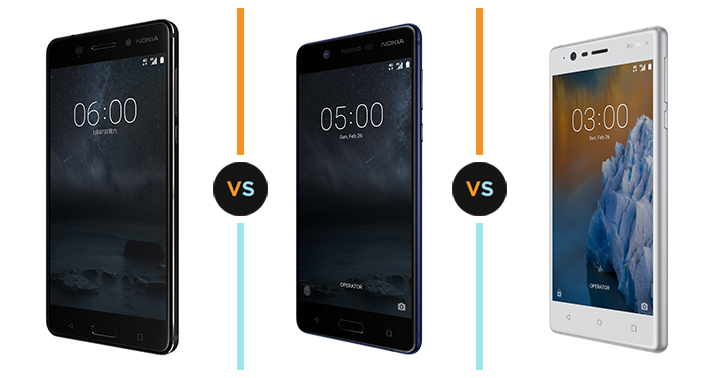 We’re more familiar with the Nokia 6 since we already reviewed its China-variant. With that, we can set certain expectations when it comes to the build of all three. The Nokia 6 has a sculpted aluminum unibody which is inherited by the Nokia 5. The Nokia 3, on the other hand, has an aluminum frame paired with a polycarbonate back. HMD Global, the new owner of the Nokia Mobile brand, sticks to quality construction where Nokia has been known before.

When it comes to specifications, there’s no flagship-level Nokia — at least for now. They’re sticking with the efficient Snapdragon 430 from Qualcomm for the Nokia 6 and 5 while the Nokia 3 gets a lower chipset from MediaTek. Memory and storage are also standard at 3GB and 32GB for the Nokia 6 with a 4GB variant and 64GB as a special edition. Nokia 5 and Nokia 3 only get 2GB and 16GB for a more budget friendly setup.

Multimedia consumption is much better on the Nokia 6 thanks to its Full HD display and stereo speakers enhanced with Dolby Atmos. Nokia 5 and Nokia 3 sport 720p panels only but their pixel density is still respectable.

Camera-wise, these Nokia phones have quite some focus on imaging. If you’ve read our camera review of the Nokia 6 with its 16MP f/2.0 shooter, we were pretty impressed by it. Nokia 5 gets a 13MP rear sensor while the Nokia 3 has 8MP but both still with bright f/2.0 aperture lens. All three get 8MP front cameras with f/2.0 aperture too, although, Nokia 3 gets treated with autofocus. Looks like Nokia 3 is a selfie-centric contender.