Xiaomi has finally unveiled its newest flagship device, the Mi 10. The brand also introduced a premium version of the device, aptly name Mi 10 Pro. With all these flagship devices getting released left and right, we decided to match up the Mi 10 Pro with two other premium smartphones: the Galaxy S20 Ultra and the Huawei Mate 30 Pro 5G. Read on and find out how they match up against each other. 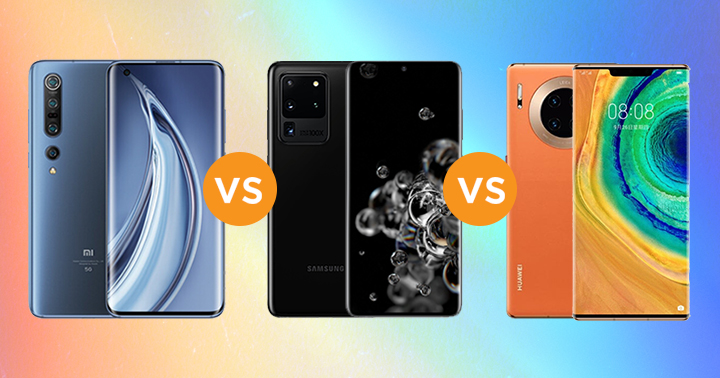 When it comes to the display sizes, the Galaxy S20 Ultra is the biggest one, measuring at 6.9-inches. Next to that is the Mi 10 Pro, with its 6.67-inch panel, while the Mate 30 Pro 5G has the smallest one at 6.53-inches. The three devices also differ in the panel they have equipped; the Mi 10 Pro has an AMOLED one, the S20 sports a Dynamic AMOLED 2.0 screen, while the Mate 30 Pro 5G has an OLED panel. As for screen resolutions, the S20 has the highest one at QHD+, while both the Mate 30 Pro 5G and Mi 10 Pro have an FHD+ resolution. The Mi 10 Pro also has a 90Hz refresh rate and a 180 touch response rate. In contrast to that, the S20 Ultra has a higher refresh rate at 120Hz.

As for processors, powering the Mi 10 Pro is Qualcomm’s latest flagship chipset, the Snapdragon 865 5G. The S20 Ultra also comes with a Snapdragon 865 chipset, and some territories have a Samsung Exynos 990 chipset instead. Meanwhile, Kirin 990 powers up the Mate 30 Pro 5G. While we’ve yet to see how these devices perform side-by-side, they’re all equipped with the newest flagship chipsets in the market, making each device powerful and extremely capable.

All three devices offer various RAM and storage configurations. The Mi 10 Pro comes with either 8GB or 12GB LPDDR5 RAM, paired with 256GB or 512GB UFS 3.0 storage with Write Turbo, while the Huawei Mate 30 Pro 5G only has one offering at 8GB RAM and 256GB UFS storage. On the other hand, the S20 Ultra has the most number of storage options, coming in at either 128GB, 256GB, or 512GB, paired with 12GB or 16GB LPDDR5 RAM. However, even with all those options, Samsung is only launching the 12GB + 128GB configuration in the Philippines. The Mate 30 Pro 5G’s space can be expanded up to 256GB via NM SD card, while the S20 Ultra’s storage can be further pushed up to 1TB via microSD. As for the Mi 10 Pro, we’ve yet to confirm if the device has expandable storage. We’ll update this article once we verify that.

Diving into the cameras, all three devices sport a quadruple setup on the rear. The Mi 10 Pro comes with a 108MP main + 20MP ultra-wide + 12MP short telephoto + 8MP long telephoto cameras. The S20 Ultra also has a 108MP main snapper, alongside a 12MP ultra-wide + 48MP telephoto + depth vision camera. In contrast to those high-resolution main shooters, the Mate 30 Pro 5G has a 40MP Cine Camera primary lens, together with a 40MP SuperSensing camera + 8MP telephoto + 3D depth sensing snappers. Impressively, the Mi 10 Pro and S20 Ultra can shoot videos up to 8K, while the Mate 30 Pro 5G is capable of shooting at 4K HDR+/4K 60 fps.

The Mi 10 Pro, S20 Ultra, and Mate 30 Pro 5G all have 5G connectivity and NFC support. As for additional features, the Mi 10 Pro has an in-display fingerprint scanner, face recognition, an IR blaster, dual speakers, and Super VC Liquid Cooling.  On the other hand, the S20 Ultra comes with an ultrasonic fingerprint scanner, face recognition, and an IP68 dust and water resistance rating. Not to be outdone, the Mate 30 Pro also has an in-screen fingerprint sensor, 3D face unlock, IP68 rating, and a Type-C ear jack.

Samsung’s Galaxy S20 Ultra wins the battery capacity department as it’s armed with a massive 5,000mAh cell. In contrast to that, both the Mi 10 Pro and Mate 30 Pro 5G has a 4,500mAh battery in it. The three devices have their respective fast charging and wireless technologies. On the Mi 10 Pro, the device has 30W PD fast charging, 30W wireless charging, and 10W wireless reverse charging. The S20 Ultra has 45W fast charging, fast wireless charging 2.0, and Wireless PowerShare. The Mate 30 Pro, meanwhile, has 40W wired and 27W wireless Huawei SuperCharge support.

Despite the numerous differences between the three smartphones, they also share a few things in common. For one, they all have a USB Type-C port. Secondly, all of them have Android 10 as their operating system, although they do differ in their UI skin. MIUI 11 runs on the Mi 10 Pro, One UI 2.0 runs on the S20 Ultra, while the Mate 30 Pro 5G has EMUI 10.

Huawei recently made the Mate 30 Pro 5G available for purchase in the Philippines, while the Galaxy S20 Ultra can be availed in stores by March. As for the Mi 10 Pro, the device just had its launch in China, but it’ll surely make its way to the Philippines, just like its predecessors.

Out of the three devices, the Galaxy S20 Ultra comes with the highest price tag (locally). Even with that, you get an almost 7-inch display, extensive expandable storage, and enormous battery capacity all packed into a highly capable device.

Price-wise, the Huawei Mate 30 Pro 5G gets sandwiched between the Mi 10 Pro and the S20 Ultra. While it can’t match up to the high-resolution cameras and large RAMs — and well, it’s lack of Google services — on paper, it’s still a competent flagship device worth considering because of its decent display, powerful chipset, and impressive set of cameras. After all, the device does come second to the Mi 10 Pro in DxoMark’s smartphone camera rankings.

While the Xiaomi Mi 10 Pro doesn’t have a local price nor launch date yet, its converted prices make it the most affordable premium flagship between the three devices. With the Mi 10 Pro, one can get a display with a 90Hz refresh rate, a powerful chipset, insanely fast wired charging support, and — according to DxOMark’s smartphone camera rankings — an outstanding set of cameras. If you’ve been yearning for a flagship device but don’t want to absolutely break the bank, then the Mi 10 Pro might be worth waiting for.