In the aftermath of the Republic Act 10175, also known as the Cybercrime Prevention Act of 2012, Sen. TG Guingona files the Crowdsourcing Act of 2012 which gives the public a chance to express their thoughts and sentiments on pending laws.

According to Senator Teofisto “TG” Guingona, the Crowdsourcing Act of 2012 allows people to comment on pending bills through email and the internet. It also allows the public to access copies of bills and measures pending before the Senate and the House of Representatives. Simply put, the people, including the online community, are allowed to participate in the process of law-making. 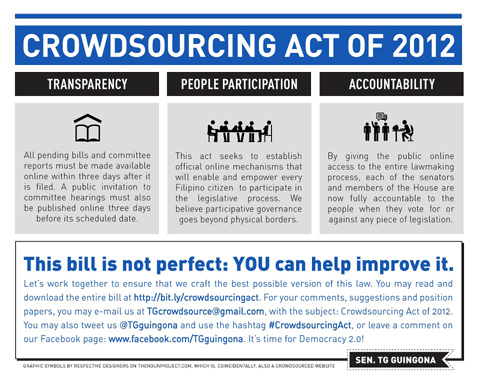 As shown in the infographic, the bill promotes Transparency, People participation and Accountability. However, as indicated, it’s not perfect and calls for help from the public in order to improve it.

You can read and download the entire bill at bit.ly/crowdsourcingact.