Smart is ending February on a high note as they release a set of new postpaid plans in the form of GigaX. The new plans will feature separate data allocations for streaming and general browsing. Other than that, the Telco is also showcasing three limited time offer devices.

As mentioned earlier, the new GigaX plans now have separate data allocations for data streaming and normal internet use. It will also have All-net texts, all-net calls, data roll-over, and a 24-month lock-in. The new GigaX plans start at Plan 599 and go all the way up to Plan 1999. There’s a catch though, these new postpaid plans will only be available until June 30, 2018. So, better apply now, or in the near future, while you still have the chance. In any case, see the detailed plan offers below.

As for the limited time offers, consumers have three choices — The Huawei Mate 10 Pro, OPPO F5, and Samsung Galaxy J2 Pro. These devices will not be offered outside the GigaX special plans. Speaking of special, the trio will also enjoy 2x data allocation for the first 6 months. There is another catch though, the limited plans are only available until April 15, 2018, and the Huawei Mate 10 Pro is the only device to be offered at Plan 2399. See the detailed plan offers of the three devices below. 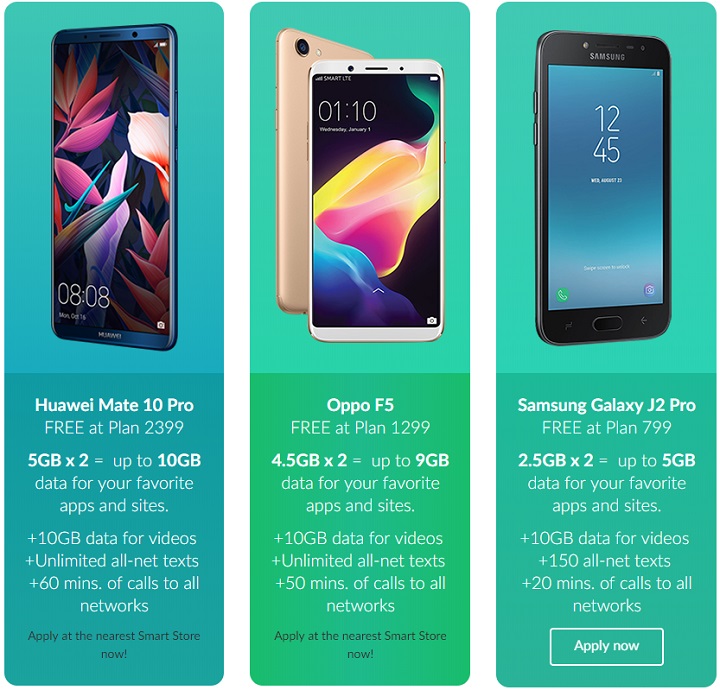 For more information and a detailed overview of Smart’s GigaX plans, head on over to their website here.