As a follow up on our brief crash course about Aperture, ISO and Shutter speed and how each affects your composition, we’re now going to take a closer look at the different Metering modes to see how this often-overlooked feature can actually be useful in improving your photography skills. 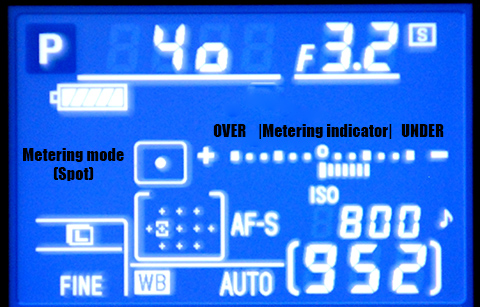 This is a screenshot of a Nikon D90’s display info which shows metering indicator and metering mode. The PLUS (+) sign signifies brighter image, while the MINUS (-) sign is dimmer.

Most modern digital cameras are equipped with light meter that measures the amount/intensity of light in a given scene. The reading is then used by our camera to determine the appropriate settings (Aperture, ISO and Shutter speed) for that particular scene which is helpful when we’re shooting in automatic or semi-automatic shooting modes (Program, Shutter/Aperture priority, etc.)

This is not to say though that our camera’s metering is totally useless when we’re shooting in Manual mode. Although it won’t alter any of our settings, it still provides us with a rough reading of the scene and will tell us if our current setting will be over or under exposed.

From left to right: Spot, Center-weighted and Matrix. The white portion on the images above shows the coverage of each metering modes where it takes a light reading and all of the black portions are ignored. Image Source

Most cameras offer three metering modes; Spot, Center-weighted and Matrix (Nikon) / Evaluative (Canon). Other cameras, especially the pricier ones, have more metering options but for the sake of this tutorial we’re only going to stick with these three common ones.

To give you a better feel of how these three metering modes varies in measuring the light on a given scene, we shot three identical pictures using different metering modes. These pictures were shot using Program mode at ISO 800 and without exposure compensation.

As you can see, Claudia the Albino Tiger, is properly exposed when we used the Spot metering on the shot. However, it comes at the cost of blowing out the background which is supposedly the home page of the best tech blog site in the country (*wink*).

Center-weighted mode, on the other hand, gave us more background detail but has significantly muted Claudia in the process. Matrix/Evaluative mode yielded a more balanced result in this scenario as far as the exposure of our furry subject and the background is concerned. 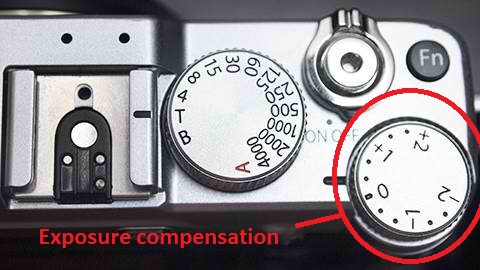 Now there are some instances when we can’t totally rely on our camera’s metering system, just like when shooting a particularly dark object like the Zippo lighter on a black background (seen below). The same is true when shooting a white object.

The rationale behind this that by default, a camera’s metering system will always aim for 18% Gray – a standard that Eastman Kodak instituted back in the early days to define “proper exposure”. The problem here, however, is that in the process of compensating for the lack of luminosity of the black object, it turns the whole scene into gray.

To balance it out, we used the Exposure Compensation on our camera’s settings. Much like the other camera tweaks, Exposure comp. is also measured in stops or Exposure Values (EV) which can be adjusted in either 1/3 or 1-stop increments. +1 means that you’re telling the camera to double the amount of light on the scene, while -1 means halving the amount of light.

The first shot (the one on the left) is taken without any exposure compensation. We stopped down to -1EV for the second shot (middle), and -2EV on the last. If you notice, the picture on the right is blacker compared to the other two snaps which is the exact result we were looking for when we took the shot.

Metering modes are a powerful addition to our camera’s arsenal. If used accordingly, it can cut the amount of time guessing which settings to use on given scene. Moreover, it can also significantly reduce the number of “test shots” that we need to take to nail the right exposure.

We’ll cap off this post with a few tips on what Metering modes to use on a particular scenario.

Spot metering is perfect for:
• Getting the right exposure of a back-lit subject.
• Shooting under uneven/tricky lighting.
• When exposure accuracy is critical.

Use Center-weighted mode when:
• Shooting portraits.
• Shooting under uneven/tricky lighting.
• You prefer consistency over accuracy.

Matrix/Evaluative mode is suited for:
• Most shooting conditions, this explains why most cameras are set to this metering mode by default.
• Shooting in a well-lit environment.
• Getting a balanced reading all throughout the scene.