The International Data Corporation (IDC) recently published its quarterly Mobile Phone Tracker for the Asia/Pacific region which shows a significant upsurge in mobile phone shipment (smartphone or otherwise) in the Philippines. Along with it comes the news that Cherry Mobile has been named the top smartphone vendor in the country, pulling an upset victory against Samsung who now sits in the far second place.

According to the data that the research firm has gathered, a total of 26.8 million mobile phones were shipped in the Philippines last year, with smartphones accounting to nearly half, 47% to be exact, of the total mobile phone shipments. 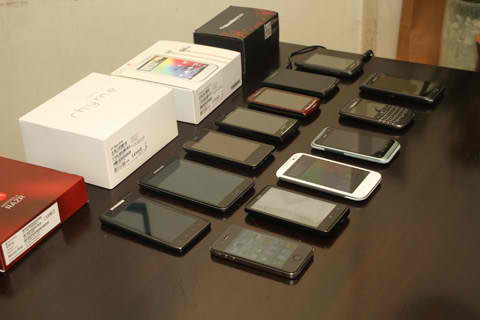 The third quarter of 2014 marked the first time that smartphones overtook feature phones in terms of shipment volume, making the Philippines the fourth Southeast Asian country to achieve such feat after Singapore, Malaysia and Thailand.

The reason for the upsurge in the smartphone adoption in 2014, Market Analyst at IDC Philippines Jerome Dominguez said that it’s primarily due to the narrow price gap between smartphones and feature phones with the former giving more bang-for-the-buck. 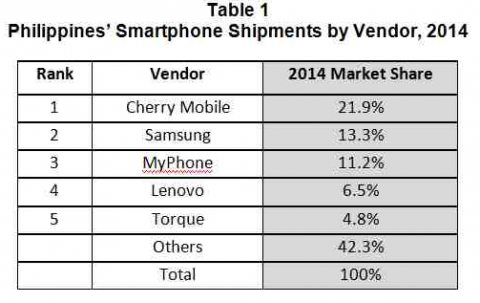 Looking at IDC’s smartphone vendor ranking above, you’ll notice that only two global brands, Samsung and Lenovo, have made it in to the top five, the rest, including Cherry Mobile which dominated the local market in 2014, are all local brands which account to almost 38% of the total market share.

Although the ranking seemed to back up what Dominguez said, Daniel Pang, the Senior Research Manager of the Client Devices group at IDC Asia/Pacific, has a different take as to why these local brands fared very well against more established international players.

“The success of local smartphone players is an offshoot of heavy marketing, celebrity endorsements, and price-competitive offerings. Branding is critical in the Philippines., The thriving local vendors are those that not only offer budget-friendly smartphones, but also produce strong ATL (above-the-line) campaigns and are endorsed by popular celebrities.”

The success of the local brands came at the cost of market shares of Chinese brands and other global brands. The latter suffered 7% drop in the total market share which, according to the research firm, can attributed to the continuous decline in popularity of Blackberry and Sony in the Philippines.

The former’s market share, on the other hand, only decreased by a single point last year. IDC believes that with the right marketing push, these Chinese vendors will see an increase in market share this year as they establish a solid footing in the local market.