Just a few days after Cherry Mobile launched the Omega HD, Starmobile flaunts the Diamond that sport specs almost similar to CM’s offering. Let’s find out the differences between these two Android smartphones.

We mentioned before that the CM Omega HD is a rebranded i-mobile IQ6 from Thailand. With the Diamond, we believe that Starmobile went with the same manufacturer and rebranded the i-mobile IQ4 (see image below). This continues SM’s tradition of launching rebranded i-mobile smartphones like the Crystal (IQ2) and the Flirt (IQ3). As for their specs, take a look at the table we prepared below and try to notice the slight differences: 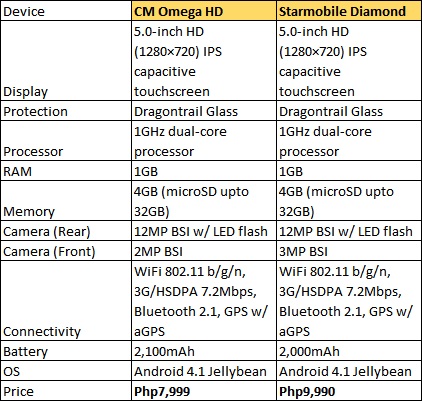 Judging from the specs, the Omega HD and Diamond are almost like twins separated at birth. The SM Diamond has the advantage of having a larger 3MP camera and the inclusion of a free 8GB microSD card in the package. However, the Omega HD has a slightly larger battery at 2,100mAh and way cheaper price tag of Php7,999 as opposed to the Php9,990 Diamond. That’s a Php2K difference.

i keep on thinking what i am going to buy between the two! ..

The first time i saw the diamond, i thought it was an upgraded omega HD. Since they are both rebranded with the same company, they are almost same. Its just that CM OMEGA HD was cheaper than the diamond and they have very small difference. I would go for OMEGA HD since its battery is higher than diomand. :)

If u are a super rich person, I reccomend getting the Diamond, i have both units and Diamond has louder speaker and longer battery life ( Sometimes dont believe the specs ) but i dont know if its worth the price of 2000 pesos

@erah u dumbass Flirt is not the same with Diamond. Flirt has a 4.5 inch qHD screen and Diamond has a 5.0 HD screen how is that the same?

@Les i bought mine at victory mall antipolo

Both CM and SM have their own bloatware which I’d rather not have. At kung knowleadgeable ka sa sinasabi mong software na na-develop ng SM for their customer needs, aber, ano yun? Worth ba yun 2k?

got my cm omega yesterday, and it comes with a free 16gb micro sd card. so definitely a winner in terms of value for money

sir, where did you bought it? Im interested in buying one. Thanks

Dumbass. Flirt has a 4.5 inch qHD screen and Diamond has 5 inch HD screen and plus u dont need to act like a bitch by saying duh. Besides Diamond is better than Omega HD way better i dont think if its worth 2000 pesos besides i swear u are cheap.

This phones are rebranded versions of I-mobile IQ6 & IQ4 in thailand which has the same price 8,490 THB. i don’t understand why the price here has a large gap even though the SM Diamond (IQ4) has enhanced SGX S31 GPU compare to CM Omega HD (IQ6) but the specs are almost the same. If SM is a quad core, 8GB ROM then the price would be accurate :)

And yes, Starmobile Diamond is overpriced and people who work for Starmobile are overcompensating in rationalizing the high price. No bloatware app, widget or anything they put in the phone would explain a 2000 peso prize difference.

Starmobile clean up your shit will you, please? Then maybe, the consumers would reconsider.

After the first day, may available pa ba na CM? Parati namang ubos so I’ll by it even if more than 2k sya, if I need it, rather than waiting for nothing.