Late last month, we gave you guys an early look at the new Cherry Mobile G2 and after spending some time with it, it’s time to give you guys our full review of this affordable smartwatch. 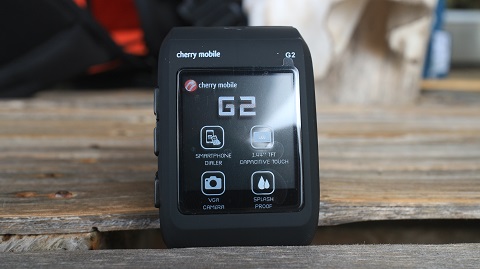 As far as design goes, the new Cherry Mobile G2 looks nothing like its predecessor. Gone are the sliding form factor with physical (and tiny if we may add) keyboard underneath the actual watch.

Instead we’re left with a respectable looking timepiece with a smooth rubberized finish and a 1.44-inch touchscreen display on the front. The latter is neighbored by three multi-purpose buttons that can be used to control the G2 or some of the features of the smartphone that it’s paired to. 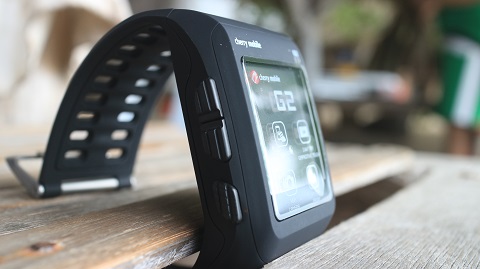 Found at the top portion of the IP-certified smartwatch (IP54) is a VGA camera and a microphone on the other end.

The wristband of the CM G2 has a commendable quality. One end of the wristband terminates to a piece of plastic with two locking mechanisms that latch on the adjustment holes of the top rubber wristband.

This plastic strip also hides the male USB which is used to charge the device. The other rubber strap terminates to a metal case back with two buckle tongues that latches on to the right wristband. Since we’re in the topic, we’d like to point that one of the straps (the one that holds the two buckle tongues) got easily detached from the main timepiece on our second day of using it. It’s worth noting that we noticed this design flaw while we were just adjusting the watch to fit our wrist, and not by doing something crazy with it like dropping it or submerging it on water.

We’re not sure if this is just an isolated case with our review unit or we’ve just grown too-fat-for-comfort over the course of the holiday festivities (probably both), but this is something that current and potential users must look out for.

The touchscreen display of the CM G2 got a slight shot in the arm from its predecessor, but it’s still not at par with high-end smartwatches from international brands. In most cases, the touchscreen interface did a fair job of detecting and reacting to touch inputs, although there’s still a lot of room for improvements. Thanks to its built-in storage, the CM G2 can double as a USB drive if needed. Users can copy songs, pictures/videos, and other media files to it either for storage purposes or for viewing the files on the device. The latter, in all honesty, is not a viable option since your pictures/videos will just look like crap when viewed on the G2’s appalling display.

As for your audio files, you can play them straight out of the CM G2 thanks to its built-in audio player. The sound can be outputted to the watch’s built-in speaker, which is fairly loud for its size, or through a Bluetooth speaker.

Unlike some of the newer wearables out there in the market, the Cherry Mobile G2 doesn’t run on Android Wear, rather a proprietary user interface created by the watch’s OEM.

As such, we were quite surprised (and disappointed) that CM didn’t really put in much effort on the pre-included user manual which would’ve made the learning curve a little easier. Instead, the burden of explaining some of the gesture-based commands is left to us, the content producers, which feels a bit sucky. Nevertheless, here’s the rundown of some of the useful commands that you can do with the CM G2:

These gestures are done when the device is on, while it is displaying the time.

Now for those of you who want to receive notifications on the CM G2, you’d have to install a third-party app on your mobile device to have this functionality. Again, we feel that CM might’ve overlooked this crucial aspect as they could’ve easily created (or included) a Bluetooth notifier app for this watch, instead of users having to resort to using third-party application which, sometimes, is not optimized for the CM G2 or the user’s mobile device. We hope you’re taking notes, Cherry Mobile.

In case you’re curious we’ve sideloaded a BT Notifier app on our device to get the notification to work.

We hope you guys are not planning to record memorable moments with the CM G2’s lone VGA camera, because if you are, then you’ll be gravely disappointed with the resulting image/video. Truth be told though, we can’t complain much about its camera since we treat it as more of value-add feature rather than a legitimate snapper that can output stunning picture. It would’ve been better if it had a better camera, but for a sub-Php2k smartwatch we feel that it’s something that we can easily sweep under the rug.

Unlike its predecessor, the CM G2 doesn’t have a SIM card slot which renders it as more of a companion accessory to your smartphone or tablet rather than a standalone feature phone like the G1 Watch Phone.

If you can live with this minor shortcoming, then we’re glad to report that the CM G2 should be a good smartphone/tablet companion. The smartwatch offers users easy access to their Call History, Phone Book, and it has a built-in Phone Dialer which takes out the hassle of having to bring out your phone if you have to dial a number. 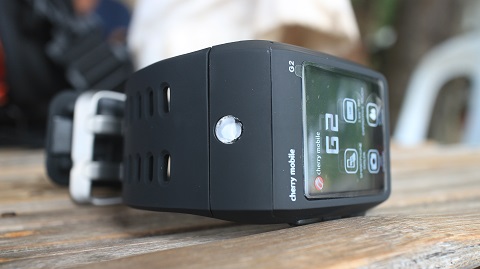 On top of that, the CM G2 can also act as wireless remote during music playback. From the watch, users can move forward/back, play/pause a song and adjust the volume without having to pull out the phone or tablet that the watch is paired to.

Having an appalling screen and a run of the mill engine setup may be good sometimes, especially when we’re dealing with battery life. In the case of the Cherry Mobile G2, it usually takes around 4-5 days before we have to reach for its charger.

Of course, your mileage will vary depending on how you use your device and how many notifications you receive on a daily basis. However, it’s good to point out that because of its meek hardware setup, it should provide better mileage-per-charge compared to other better-spec’d wearables.

2014 is, undoubtedly, the year of smartwatches and not surprisingly, Cherry Mobile tried to ride that fad and released their second wearable, the Cherry Mobile G2. The watch sports a few upgrades both in the aesthetics and functionality departments from the previous model, and the best part is that these improvements only resulted in to a minimal price hike.

Sadly, we noticed a few concerning caveats, particularly on its design and durability, that may put off potential consumers. We understand that two grand for a decent smartwatch is a hard deal to turn down, but we feel like consumers would be willing to shell out extra Php500-Php1,000 for better build quality, especially since these type of devices are most likely a daily driver.