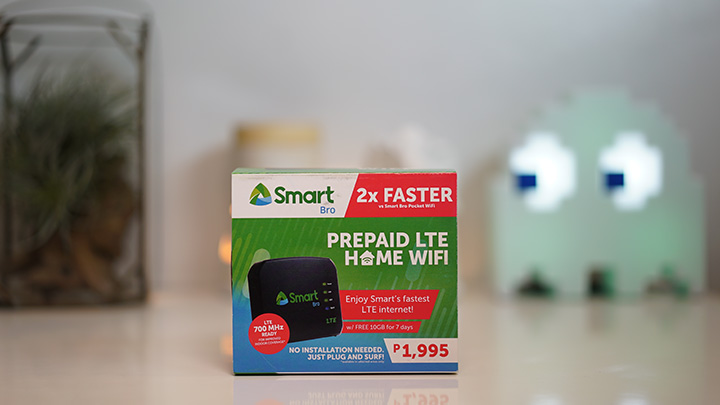 As an alternative to your usual pocket WiFi, the prepaid SmartBro is more of a fixed LTE router that requires a wall outlet. 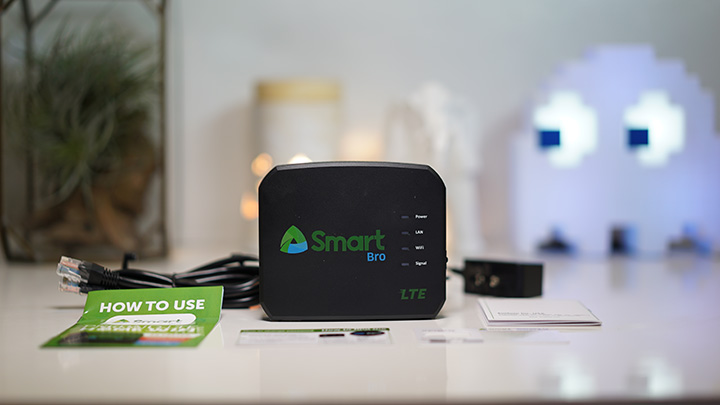 This is not the first time Smart had this kind of device. In March 2009, they released the SmartBro Share It wireless router. It was under a postpaid plan and costs Php999 a month for 90 hours of internet at 2Mbps speed.

In July of the same year, they upgraded the plan from 90 hours a month to unlimited though it still had limited connection within Metro Manila. They eventually retired the service by September 2011, just a little over 2 years after it was introduced. 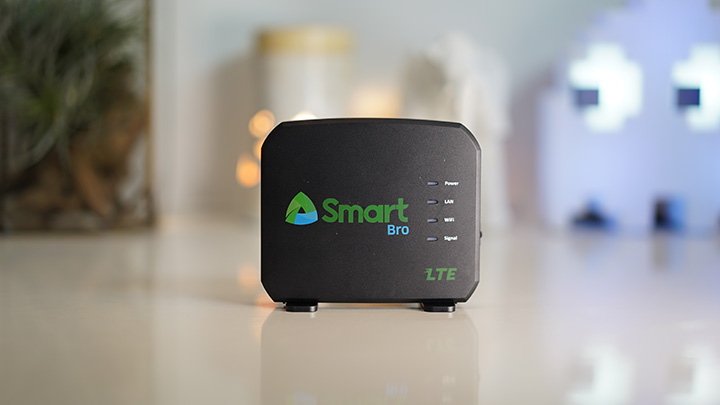 The re-introduction of the SmartBro Share It as the Smart Bro Prepaid LTE Home WiFi was obviously prompted by the Globe Prepaid Home WiFi released earlier this year.

The router is a small and compact device in matte black polycarbonate material around 4 x 6 inches in diameter and about an inch thick. It comes with attachable feet to help keep it stand upright. 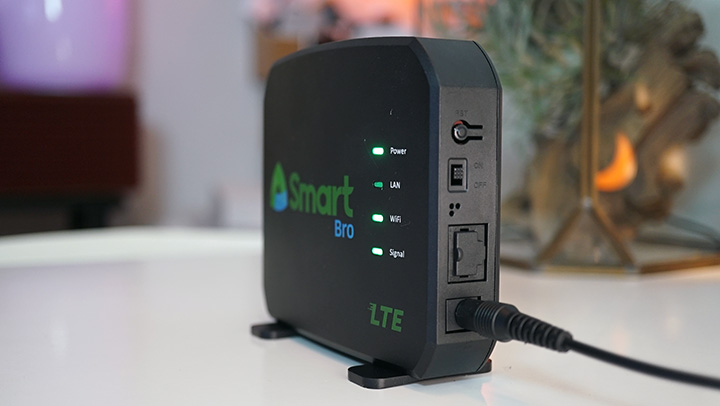 There’s a power switch on the right side, along with a lone Ethernet port, a reset switch, and power port. There are ventilation grills at the top and bottom of the device. The SIM card slot is found at the bottom. 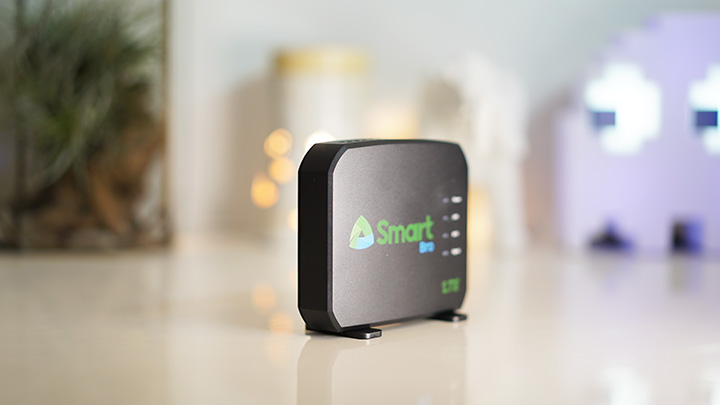 At the front is the Smart Bro logo and LED lights to indicate Power, LAN, WiFi and Signal. Signal indicators assist you in determining if the device has good reception with color codes. At the back are sockets where you can attach the legs so the device can freely stand. There are additional hooks on the other side of the back panel if you want to mount the device on a wall. 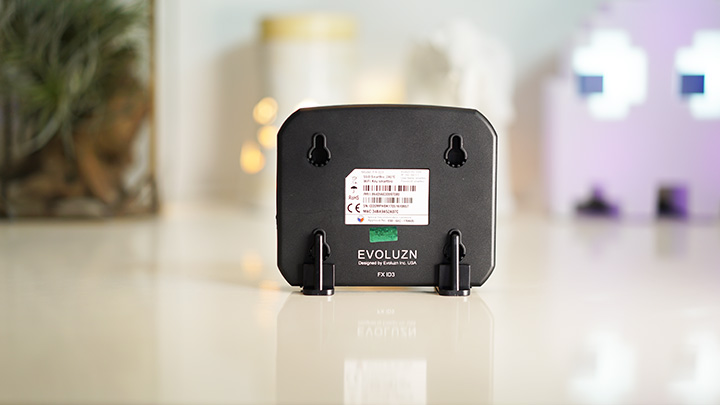 The EVOLUZN name is also printed out at the back along with a small sticker that indicates the default AP name and WiFi password.

The Smart Bro LTE WiFi router has a simple administrative page or dashboard that you can access by going to smartbrosettings.net The WiFi default password is “smartbro” and you can just change that in the dashboard once you’re logged in. We recommend changing the AP name and password after you activate the router for security reasons. 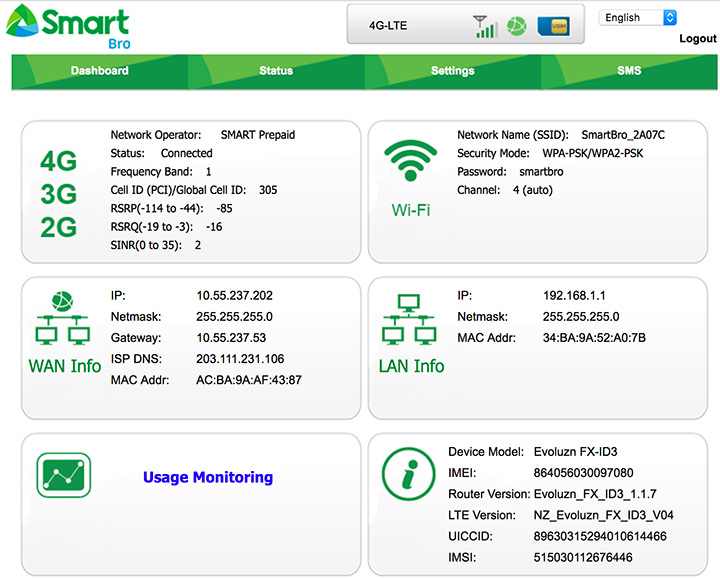 The router supports up to 10 concurrent connections which include the single LAN connection available.

Aside from the Settings, there’s also a built-in SMS composer that you can use to load up the SIM card and subscribe to a SurfMax or GigaSurf plans.

It’s safe to assume that the Smart Bro LTE Home WiFi is available in areas where there’s strong Smart signal. We have to stress that signal should be “strong”, otherwise you might not get good reception and internet speed. This part should be self-explanatory.

As for actual speed of the connection, we’re getting a consistent speed between 4Mbps to 6Mbps download in several areas in Makati and Taguig. Upload speeds are much better, ranging from 8Mbps to 18Mbps. 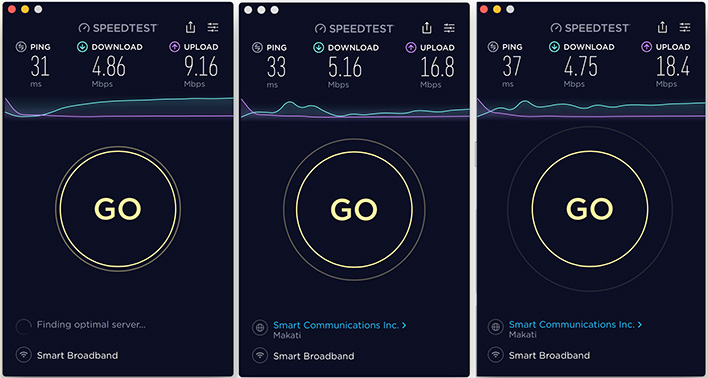 Do note that connection speed will vary greatly on your location, signal strength and barriers between the device and the cell tower. This particular LTE device is 700MHz-ready so it has better signal penetration on structures like building or thick walls.

Also interesting to note that the latency (ping time) on all speed tests we’ve made are quite fast and all under 50ms. We’ll be doing a few more speed tests in various locations and update this section so we’d get a better appreciation of the performance.

Another way to pre-determine the speed performance in your area, you can get a Smart prepaid SIM card and use it with an LTE-capable phone to run your own speed tests. That should be the same once you use it on the Smart Bro LTE Home WiFi.

My only issue with the device is that it will intermittently lose signal and can only be restored by switching it on OFF and ON again. In several instances, the “Signal” LED light is red but there’s active internet connection. Could be a firmware problem but can be a bit of a headache sometimes.

The device itself costs Php1,995 and comes pre-installed with a prepaid LTE SIM card. Once activated, it comes with 10GB of data allocation for 7 days.

Once you run out of data allocation, you can just subscribe to any of the SurfMax or GigaSurf plans:

Author’s Note: Smart Bro also has FlexiTime but they did not include or mention it in the guide/manuals. Nevertheless, it could also be an option for those looking for time-based charging.

The postpaid plan gives you different options and MSF:

These are basically the same plans as the one offered by the Smart Bro Pocket WiFi.

To monitor your account, you can enroll the number to the Smart Dashboard so you can check the current load balance and the data allocation as well as the expiration. One of the best use cases for this kind of prepaid internet service is that it can be a reliable back-up whenever your primary connection is down or unbearably slow.

For content creators (photographers, vloggers or YouTubers), the really fast upload speeds helped a lot in increasing the time to upload our videos on YouTube. These are upstream speeds that we don’t normally get on typical DSL lines (normally just 1 to 2 Mbps).

The Smart Bro Prepaid LTE Home WiFi isn’t really made for primary use. Rather, it’s a backup device just in case your main broadband internet service conks out when you badly needed it. 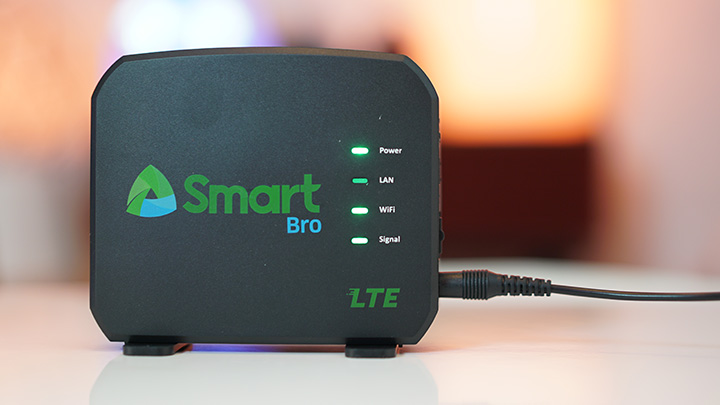 If you’re on a DSL line where the upload speeds are quite low, like 1Mbps to 2Mbps only, the device can kick in and give you the much needed extra bandwidth for uploading large files or content.

There’s an option for daily use, either weekly or monthly, but that’s also capped as well (800MB/day for prepaid and 1GB/day for postpaid). And since the cost is really proportional to the data consumption, it boils down to one’s preference and needs.

Nevertheless, in the last few days that we’ve been using it, we pretty much see the need for it. In your case, that’s really dependent to your situation but it would be nice to have it around just in case the need arise.

What we liked about it:
* LTE 700MHz-band ready
* Quick and easy to use
* Affordable device
* No lock-in period
* Option for postpaid plan

What we did not like:
* No unlimited data option
* Does not support external antenna
* Intermittent signal problems

i bought smart post paid pocket wifi. It is very slow in cavite. no signal most of the time. the average speed i get is 0.2mbps. I tried it from dasmarinas to tanza. the only place na malakas siya is sm bacoor area at orchard and daan hari in from of vermosa. where you can get 5mbps speed, the rest you have to wait for infinity for the page to load choppy and streaming kung meron ka makuha. mabilis lang ang upload speed of 15 to 30 mbps pero download wala. wala wala