The ASUS Zenfone 3 Zoom is not the company’s first “zoom” smartphone. In 2015, they released the original Zenfone Zoom, however, it didn’t get enough traction considering the price and competition. After two years, ASUS revived the Zenfone 3 Zoom with a fairly strong combination of premium build, dual rear cameras, capable specs, and large battery.

Asus went back to the drawing board and had to re-think the concept that would best represent their “Zoom” line. As a result, the Zenfone 3 Zoom sports a very different look compared to its predecessor. It’s no longer bulky and unwieldy but instead features a thinner profile with rounded sides. The design is akin to the Zenfone 3 Max but more attractive and in a way, has a similar appeal as the iPhone 7 Plus. 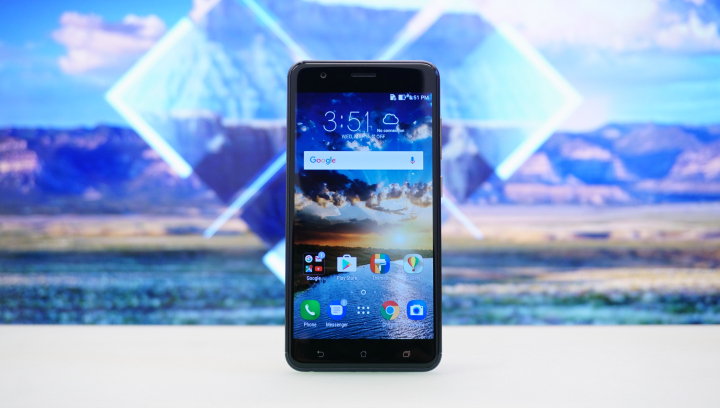 The front has the 5.5-inch display with the receiver above it along with the 13MP selfie camera, notifications light, and sensors. Down below are three unlit capacitive keys for navigation. All of these are protected by Gorilla Glass 5 that slightly curves along the edges. On the right are the volume rocker and power/lock button. It’s metallic and textured with firm tactility. The left side, on the other hand, houses the hybrid SIM tray that can accommodate two nano-sized SIM cards, or a nanoSIM and a microSD card. 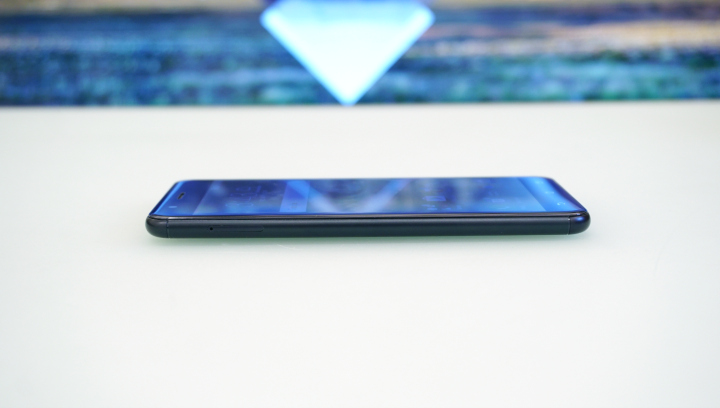 Up top is the secondary microphone, while down below are the 3.5mm audio port, main microphone, USB C port, a couple of screws, and the loudspeaker. At the back are the dual 12MP camera, Laser AF module, dual-LED flash just below it, and the squircle fingerprint scanner (rounded square) in the center. Just like in the Zenfone 3 Max, there’s a couple of glossy antenna bands at the top and bottom corners.

The matte black finish is smooth and grippy but can also be a smudge-magnet. 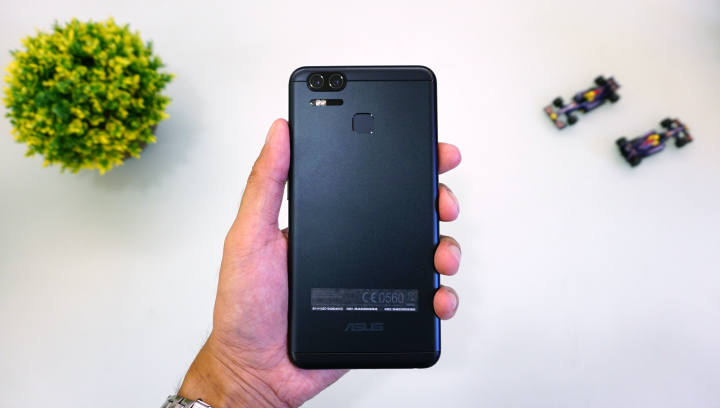 The Zenfone 3 Zoom sports a 5.5-inch screen with full HD resolution which brings it to 401ppi pixel density. It also uses a Super AMOLED display which is capable of producing vibrant colors, deep blacks, and wide viewing angles. 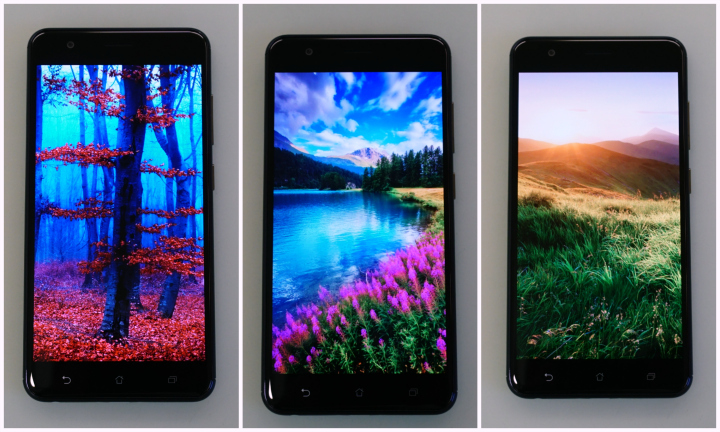 Diving inside options, we noticed that the Zenfone 3 Zoom uses the Super Color mode by default, meaning colors are being boosted and as a result, are more punchy. Switching to standard mode seemed like a downgrade as the resulting color are dull in comparison. That said, we’d recommend using the Super Color mode. It’s not going to deal much strain to the battery life anyway. When it comes to multimedia, the Zenfone 3 Zoom boasts a 5-magnet speaker construction, metal voice coil and expansive sound chamber powered by an NXP Smart AMP. Sounds fancy but it actually sounds good. Audio is full and rich and you can even adjust bass and treble inside Audio Wizard. In addition, it supports studio-grade 24-bit/192kHz playback and built-in support for DTS Headphone:X 7.1.

Out of the box (at least for this review unit), the Zoom runs on Android 6.0 Marshmallow with ZenUI 3.0. ASUS said that it’s going to be upgraded to Nougat within the first half of this year. Looks and layout are similar to the rest of the Zenfone 3 series so there’s nothing new in that department, so let’s dive in right away into apps. Bloatware is one of our issues in Zenfone devices as it often comes with pre-installed third-party apps we don’t actually need, with some designed for the Chinese market. The good news is, you won’t find most them in the Zenfone 3 Zoom. 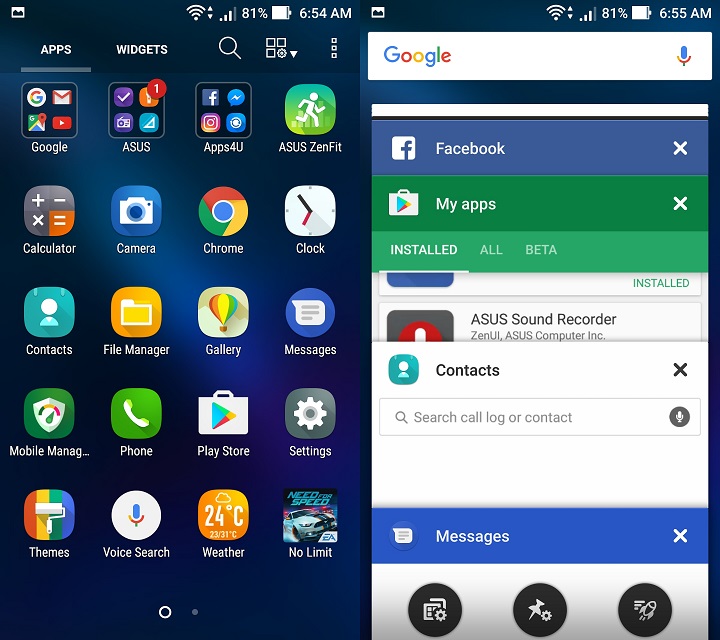 Pre-installed third-party apps are still here though but only a few and limited to Need For Speed, SIM City, Facebook, Messenger, and Instagram, which you can remove. Aside from the basic Google apps, ZenUI apps are also present. These apps are pretty useful although Play Store will have to update all of them when you run the device for the first time. 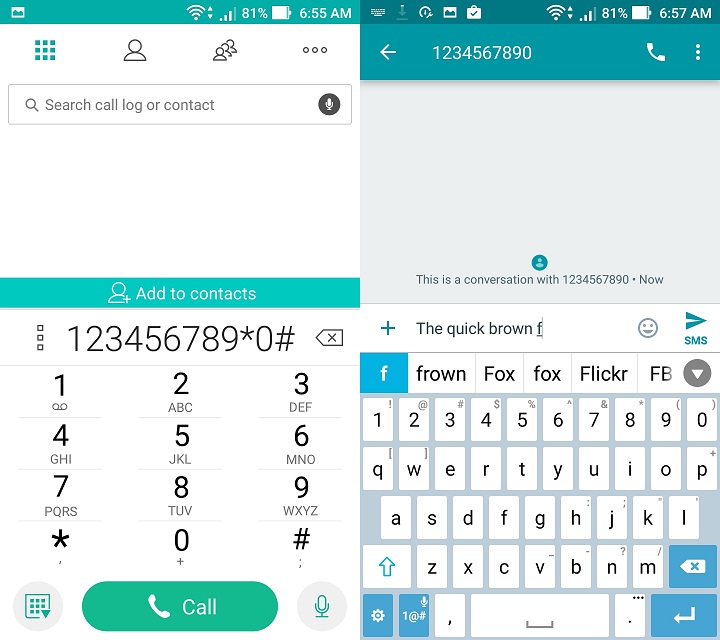 Storage-wise, the Zenfone 3 Zoom starts at 32GB but the one that will be released in the Philippines will have 64GB. Usable space is at 52.53GB which is still sizable. Should you find the need to expand it, you may do so with a microSD card using the SIM 2 slot.

The biggest feature of the Zenfone 3 Zoom is the dual rear camera setup with 12MP sensors. The two cameras are not made equal though as the first one is a Sony IMX362 sensor, with a color correction (RGB) sensor, f/1.7 aperture, 25mm focal length, 4-axis OIS, 3-axis EIS, supports 4K video recording, and uses the ASUS TriTech+ AF system which consists of the Dual Pixel PDAF, 2nd-gen Laser AF, and Contrast Detect AF. The second camera has a Samsung 3M3 sensor, f/2.6 aperture, capable of 2.3x optical zoom, up to 12x digital zoom, 59mm focal length, and uses a Contrast Detect AF. These cameras behave, perform, and are used differently depending on the shooting scenario. 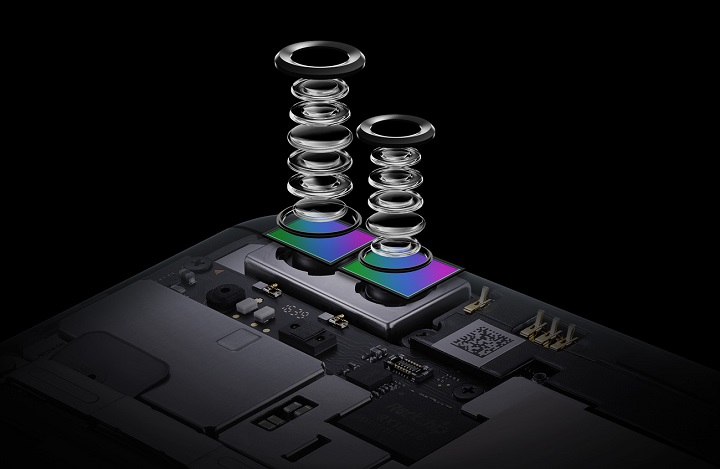 For general purpose shooting, and by default, the Zenfone 3 Zoom uses the Sony sensor, while the Samsung zoom camera is for distant subjects or close up macros. To change the zoom level, just tap on the circle near the camera shutter. In Auto mode, the Zenfone 3 Zoom doesn’t automatically switch to the Samsung zoom camera when you tap on the 2.3x zoom. If the camera software determines that the Sony camera is more apt for the scene, it will just use a 2.3x digital zoom. However, if the camera recognizes that you’re shooting something from a distance, it will use the 2.3x optical zoom using the Samsung camera. 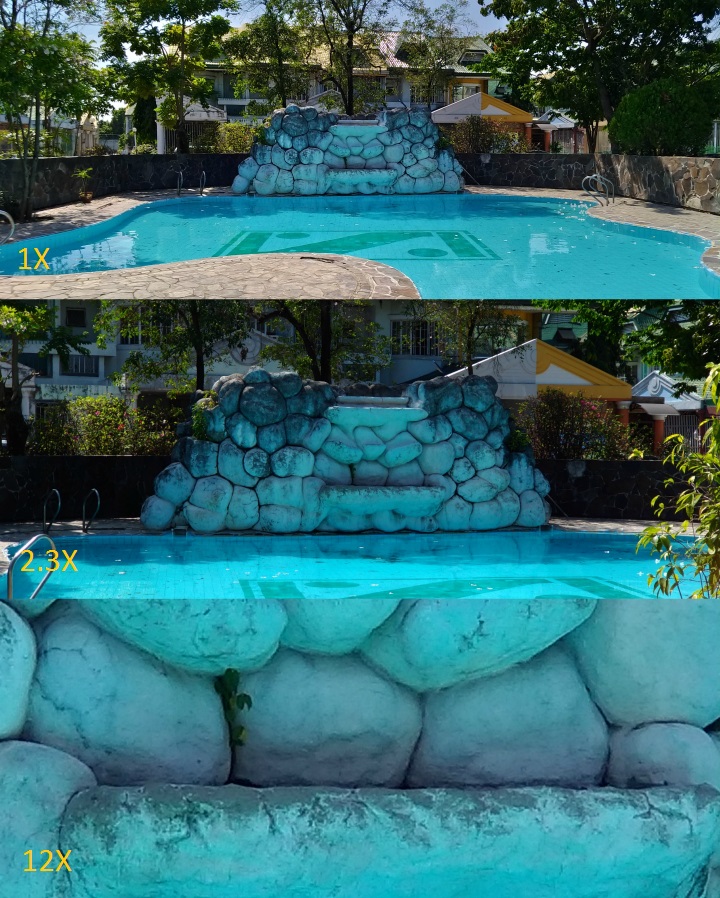 What you can do though to make sure you’re using the 2.3x optical zoom is to use Manual mode then tap on the 2.3x zoom manually. You can also zoom up further to 12x by using the pinch-to-zoom gesture. 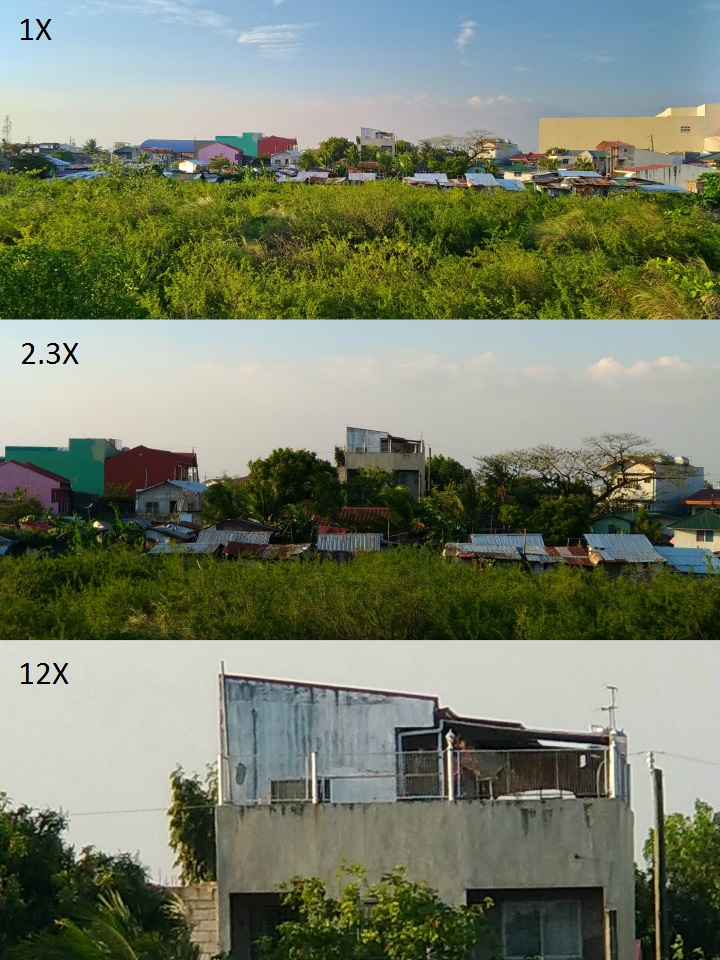 When it comes to images, both cameras produce photos with good quality, natural colors, and plenty of detail, especially in bright conditions. Comparing the sensors, we find Sony’s to be sharper compared to Samsung’s. Low-light quality is decent, although you’re better off using Manual mode for better control over quality. Check out the samples below:

It is also capable of shooting subjects with an artificially blurred background. It does this by shooting two images with varying focus. It’s slow though and takes about 2 or 3 seconds, but the quality is good enough for most cases. The front camera, on the other hand, performs well outdoors but loses quality indoors or in low-light scenarios. 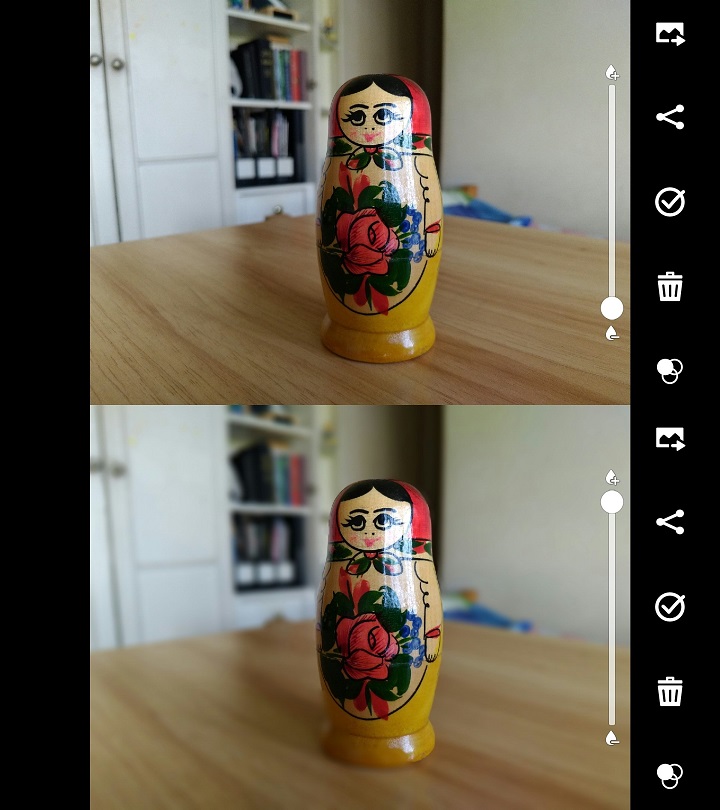 As for video recording, it maxes out at 4K resolution at 30fps. Quality is good with support for HDR video recording. There’s video stabilization as well, although not enough to eliminate strong shakes. Watch the sample below:

The Zenfone 3 Zoom also has plenty of in-camera features, 19 in total, which includes HDR Pro, Super Resolution, Depth of Field, Slow Motion, and Time Lapse. That said, there’s plenty of options to play around with the device’s camera.

Powering the Zenfone 3 Zoom is a Qualcomm Snapdragon 625 octa-core CPU clocked at 2.0GHz, Adreno 506 GPU, and 4GB RAM. That’s the same configuration as the Zenfone 3. So far performance is great, it’s smooth and lag-free, the fingerprint scanner is responsive, and can run games without issues. However, we noticed that it can get really warm when using the cameras, especially during video recording. The device can handle it pretty well though as it hasn’t crashed or caused any error during use. Check out the benchmark scores below: 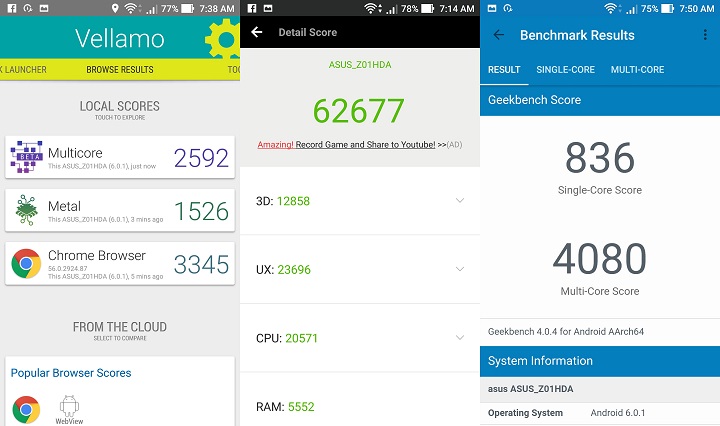 Author’s note: We have excluded Futuremark Oy’s benchmark apps (3DMark for Android and PCMark for Android) from the results as they keep on crashing on our unit. We’ll update this post once we have a fix.

Mobile data and call quality are good as well as long as you’re in an area with healthy coverage. Voice calls are not a problem thanks to the dual internal mic with ASUS Noise Reduction Technology.

Normally, smartphones of this caliber pack a battery below 4,000mAh battery. ASUS kicked it up a notch though with the Zenfone 3 Zoom by equipping it with a massive 5,000mAh battery — the largest battery in the Zenfone 3 family which is a bit ironic since that feature used to be owned by the Zenfone Max variant. During our time with it, consisting of constant WiFi connectivity, heavy social media use, a few hours of mobile data and gaming, and taking photos and videos, the device was able to last us for a day and a half before it hit the red line. 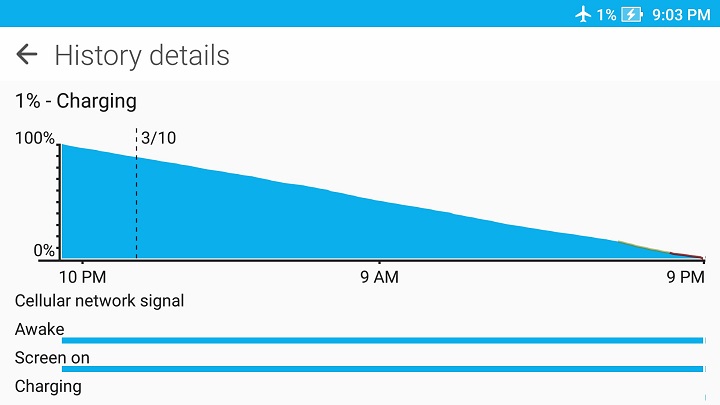 As for our video loop test which includes playing a 1080p video on loop in Airplane mode at 50% brightness and volume with headset plugged in, we got 23 hours and 44 minutes of playback which is impressive. Charging takes about 2 hours and a half from 0% to 100%.

We must admit, we already liked the Zenfone 3 Zoom even before we got our hands on it. It’s a heavy-hitter in terms of mobile photography. 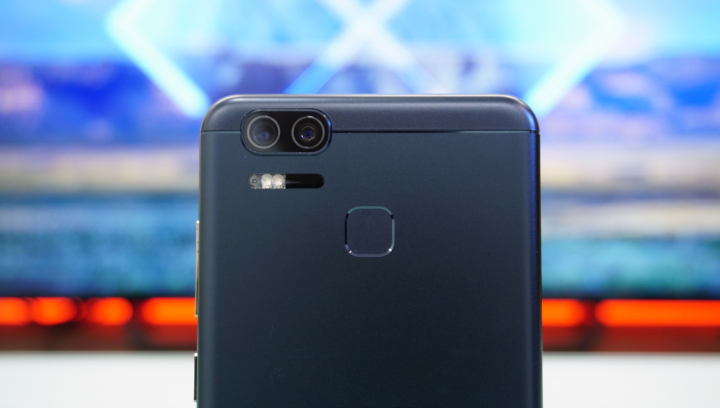 The processor may not be as powerful as other flagship smartphones out there but the Snapdragon 625 has already proven to be more than capable of handling most tasks out there. Considering the chip’s power efficiency, this is a strong compliment to the large battery capacity.

The only thing we’re waiting for is the price. The original Zenfone Zoom debuted at a pricey Php26,995, but if the Zenfone 3 Zoom can put itself at under Php20K as ASUS has previously disclosed before, then it looks like we have a winner.

Cons:
* No NFC
* Quickly heats up when using the camera
* Plenty of ZenUI apps pre-installed
* Yet to receive Android Nougat