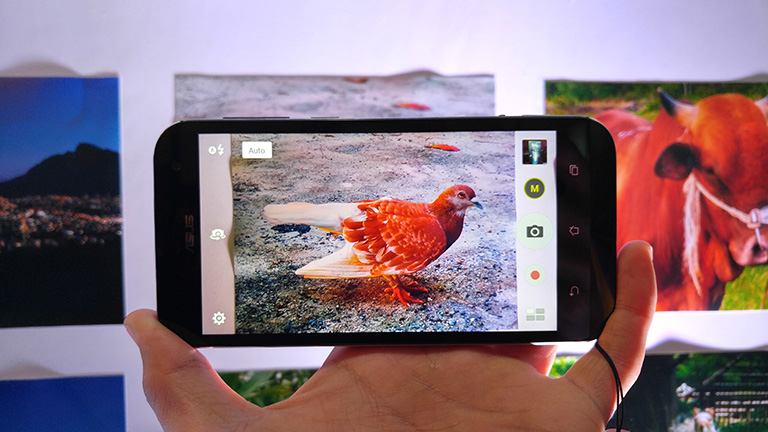 We haven’t had any major gripes with the previous Zenfone’s 720p display, but as for the Zoom, the company fitted it with a Full HD screen so users could enjoy not only watching 1080p videos, but also appreciate the shots taken from its own camera.

Being from the Zenfone family, the Zoom basically has the same backfiring speaker located at the bottom left corner of the device. Although instead of the dotted speaker holes arranged at the center of the back panel, we now have 3 short lines directly over the phone’s speakers.

It goes to pretty loud volumes, and is even louder and clearer than the other Zenfones we’ve tried before thanks to its SonicMaster 2.0 audio technology. Hardware-wise, the company boasts that it’s been equipped with a 5-magnet speaker in an expansive-sound chamber to make sure it delivers clear audio.

The set of speakers built into the Zoom would definitely suffice for watching online videos that you see in your feed and even when you’re bored and decide to watch a TV series. The Zenfone Zoom still runs on Android 5.0 and is of course layered with the company’s Zen UI. It comes with the usual bloatwares like Amazon Kindle, Photo Collage, etc, plus the normal ASUS apps.

What’s good, though, is that you wouldn’t have to worry about these extra apps taking up space in your phone as the Zoom has an internal storage of 128GB. After all the necessary apps that we needed, we still have around 108GB of space left for media and games. The company made sure that their camera phone is indeed a good one and armed it with serious hardware like a 3x optical zoom, dual-tone LED flash, laser autofocus, 4 stops of OIS, and a 10-piece lens made by Japanese optics expert HOYA.

The Zoom also has a manual mode that lets its users manually adjust the settings before taking a photo. Here you can tweak the ISO sensitivity, shutter speed, white balance, exposure value, and focus.

Here’s a quick video we made during the local launch:

Using this mode, we were able to take low-key shots which aren’t that simple to do on automatic settings. Here are our top picks from our shots:

If you want to view more shots from the Zoom, you may check out our Gallery: Sinulog 2016 Using ASUS Zenfone Zoom.

In terms of video recording, it could only shoot up to 1080p videos. Users could also opt for manual settings, but for some reason, shutter speed is fixed at Auto and adjusts accordingly depending on the ISO. Personally, I would prefer it if it was on full manual like the other camera phones.

From the sample photos, colors are well-saturated, but not overly vivid and that’s a good thing. Images are also sharp, but could improve on having a bit more contrast, in our opinion.

At night, though, it’s a bit hard to use the Zoom and produce blur-free shots with natural lighting since turning on its Night Mode drops the shutter speed in order to capture acceptable images — you’d be better off using the flash if you want to shoot at night.

While shooting, we also noticed the device and the entire camera plate getting warm after about 5-10 minutes of usage. Manual focusing is also sometimes laggy and poses a problem in getting the perfect focus. It’s a small thing, but since this is a camera-concentrated device, you should be made aware of it.

What’s good, though, is that we see real-time effects of fiddling and playing with the settings. We’ve tried other smartphones that supposedly have a good camera with manual settings, but has no live preview of the effects.