Last Friday (July 4), Xiaomi Philippines ran another round of sale on their Mi3 smartphone. The first round sold out all 3,000 units in an hour so we’re expecting almost the same time on the second round.

According to our source inside Lazada, Xiaomi managed to sell over 1,300 units of the Mi3. 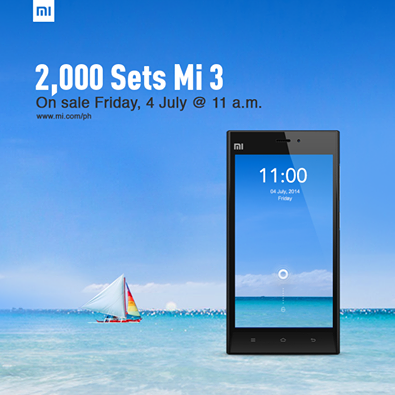 Add that to the Php31.5 million that sold the first time around, that’s close to Php45 Million is sales for the two days it went live in Lazada.

We’re also told the Redmi and the Mi Pad will also go on sale in August.

Update: According to Lazada, the figure is incorrect. The company does not release partner specific sales information or comment on future selling plans.

I was able to ordered it last July 4 and my bank informed me the transaction confirmation via SMS. Said to say Lazada cancelled it due to technical issues and I’m sure it’s not my bank that was having an issues, I have no pending balance to settle. What is this “technical issues” then the’re referring?

Has anybody bothered to check where their service center is located, if there is one, that is???

or maybe, in a span of one hour only 1700 units were sold, may over stock Ng 300 units.
the smart phone business is over saturated in the Philippines, and while the spec of xiaomi is good, it lacks the dual sim that pinoys need the most, kaya Hindi sya patok

kung hindi patok yong xiaomi, how come they were able to sell 3K Xiaomi Mi3 a few weeks ago? That is equivalent to more than P31,000,000.00 in sales in a little over an hour. Tapos a few days ago, Pinoys gobbled 1.3K units which is equivalent to more than P13,000.000.00. That is a total of more than P44,000,000.00 in just a matter of hours! Their sales figures are staggering considering that Xiaomi is just a newbie here in the Philippines. This is really unprecedented. I am excited to what Xiaomi can offer in the future. The competition is indeed getting hotter.

300 went to gray market i supossed. 1700 unit sales sold in an hour is still a feat unmatched even by iphone launches here in the phils. im a proud mi3 user, and honestly it is only just about now that i appreciate android. The battery also made my day, heavy usage with still 20% going into the night.

The classic ACDC tactic! Attack and Collect, Defend and Collect. I wonder on the next few weeks to hear something like this again. Maybe Yugatech wants an increase from Xiaomi, huh?

Yeah right Yuga, you can spin this all you like but THIS IS BAD NEWS. Its not selling like hot cakes like its supposed to. I hope they continue to operate in the Philippines despite this. C’mon guys, I got a MI3 and its awesome.

Xiaomi fanboy, the blog is not about the quality of Mi3, it is about their insider from Lazada claiming that Xiaomi did not offer the original quantity that they posted in their fb page.

For a business that rely on pure e-commerce, this is misinformation if proven true. It’s ok to do marketing hypes, just don’t give false advertising. It will be a question of credibility because people will also be asking if they really did offer 3000 units on the first flash sale. Walang utu-utong customer ang maniniwala pa sa negosyong nang-uuto whether you’re an international giant or a local brand.

Weird, if they did manage to sell out why would they say out of stock in their website? Looks like opaque marketing-speak going on. I hope this won’t deter them from making in roads in the country. All we have are hearsay and no official PR from Xiaomi, unlike in other markets (5,000 Redmi Note got sold out in one second sa Taiwan). This could mean they are very disappointed sa sales…

The blog said that it is according to a Lazada insider. Xiaomi should clear this information because if they only sold 1,700 instead of their published 2000 units, they will certainly piss off many people who waited for their phones.

can’t wait for the redmi note!