We’re here at Mactan, Cebu to witness the local announcement of the tablet that has been getting a lot of attention since its debut in this year’s Mobile World Congress. Folks we’re talking about the tablet with phone capabilities, the ASUS FonePad.

Majority of the front portion is occupied by the 7-inch display and just have enough room to fit the earpiece, 1.2MP camera and its sensors. Just like its Vanilla Android-touting counterpart, ASUS also forgoes the use of physical or capacitive buttons on the front of the FonePad and instead opted for an on-screen buttons for Home, Back and Menu. 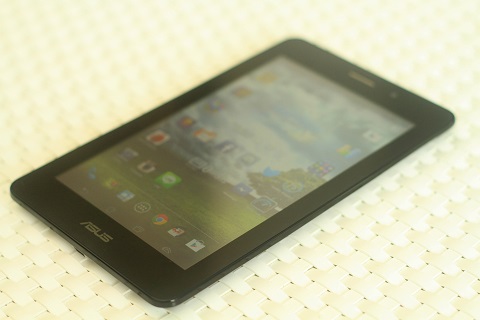 There are only three buttons on this tablet which are all placed at the top left hand side of the device. The pair sitting closely to each other is the buttons for volume, and slightly above it is the Power/Sleep/Wake button. We noticed that the keys on the demo unit is already flushed probably due to wear and tear. However, considering that the unit is fairly new as it was just recently announced in Barcelona, it may be sign of keys’ inability to withstand heavy presses.

When viewed head on, the Asus FonePad may give an impression that it’s just a typical plastic slab. However, flip the tablet on its back and you’ll notice an elegant aluminum back plate complemented by a slightly off colored removable plastic cover which hides the the MicroSIM and MicroSD card slots. The 3.15MP snapper is placed dead center at the top portion of the tablet. 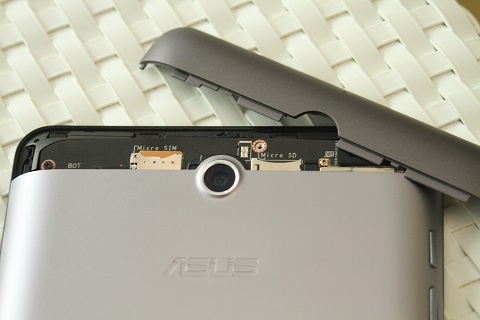 The bottom half of the device’s posterior plays host to a small speaker. Keeping it company is a pair of ports for audio and MicroUSB is situated at the bottom portion of the tablet.

Although the FonePad isn’t exactly the thinnest or the lightest of the lot, its 10.4mm frame and reassuring heft of 12-ounces provided a rather comfortable grip. Moreover, the tablet is fashioned to have a good center of gravity which makes it easier to hold.

As far as design is concerned, we can definitely say that the Asus Fonepad is one of the more good looking 7-inchers in recent memory. The combination of simple layout plus the aluminum make of the back plate not only makes it pleasing to the eye, but also adds a sturdy appeal to it. Unfortunately, the same cannot be said for the ports on the side, which may present some concern for users in the long run. Asus has yet to announce the local pricing and availability of the FonePad. It’s current SRP outside of our homeland is slated at USD249. We’ll make a follow up story about the other components of this tablet, including initial benchmark results and camera performance, so stay tuned for that.