Not too long ago, we’ve posted our first impression of the Cherry Mobile Cosmos X2 where we took you to a quick tour of its externals. Now it’s time to get more up close and personal with the Cosmos middle child to see whether it’s got some muscle to go along with its deceiving SGS3/Nexus 4 body.

Before we go into its inner workings, let’s first tackle the X2’s gorgeous 4.8-inch display which is easily one of its strongest features. Although the market has almost entirely succumbed to the 5-inch 1080p craze, one can’t simply rule out the 720p-touting handsets, especially when you got a Super-AMOLED screen to go hand in hand with those pixels just like on the X2.

The result is an absolute eye-candy. It’s got a decent outdoor legibility, impressive color reproduction and great viewing angle which was actually a bit surprising considering that it isn’t IPS (well at least that’s what’s written on its specs sheet). 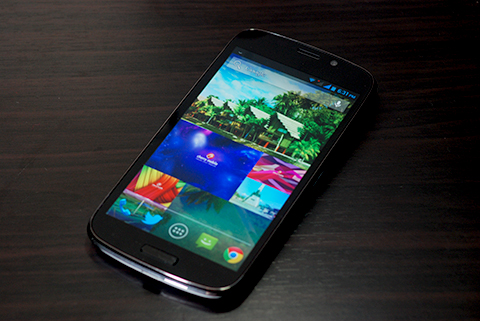 At its dimmest, the X2’s screen is still relatively bright compared to other phones on the same league. It’s good in most cases as you wouldn’t have the need to crank up the brightness to get a decent view, but it does take a toll on its battery which we’ll discuss in the latter segment of this post.

One of the perks of having a superb screen on your smartphone is watching flicks or viewing high-res pictures. But having a good display is one thing, delivering a seamless movie playback is another. 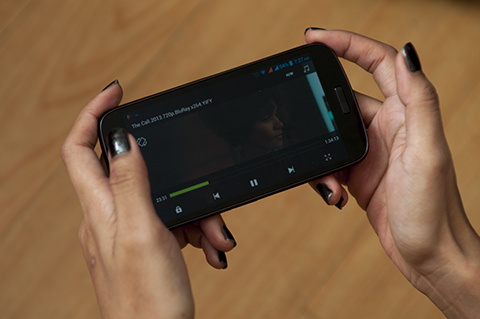 Fortunately, the Cosmos X2 was able to deliver quite well on both of these areas thanks to its 1.2GHz quad-core processor and 1GB RAM setup. Regardless if we ran the whole film from start to finish, or just skipping through the various section of the flick, we didn’t see even a hint of lag on the X2.

In terms of sound output, we weren’t exactly blown away by it, but it’s certainly not the worst in class either. The sound coming out of its loudspeaker is loud enough to fill a small room, but can be a little soft outdoors or inside a fairly large room. 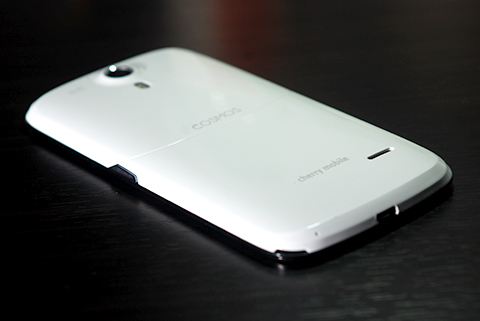 Now if you’re the type who often listens to tracks on your smartphone through its audio jack, then I strongly suggest to buy a decent ear/headphone along with the X2 as the one that came with is just plain crap. It’s one of those clunky, thin-cabled headsets that are lucky to last a whole week’s worth of use.

But the problem here is that not all earphones are compatible with the X2. Yes, it has the typical 3.5mm audio port, but the threads are fashioned a little differently than usual. As such, it’s best if you bring the handset if you’re trying out a set of plugs for it.

Since the handset was pretty much breezing through all of the basic tasks we’ve thrown its way, we decided to give its engine a workout. That comprised of playing Asphalt 7 while leaving the Facebook and Twitter app running on the background and fetching feeds over Wi-Fi. 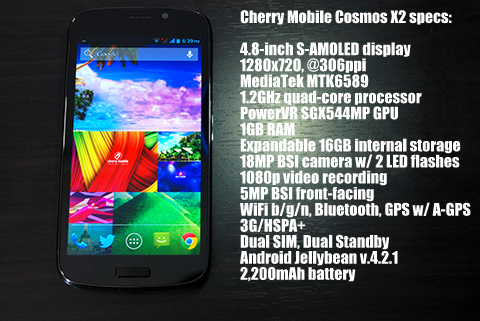 Considering the fair amount of strain brought by those apps, we have to say that we were impressed with how well the X2’s internals handled it. In-game lags are barely noticeable, transitions from menus to menus we’re rather quick and loading times were fairly snappy.

Now for the sake of keeping score, we’ve ran our usual synthetic benchmarks on the Cosmos X2 and here are the results that we’ve got. 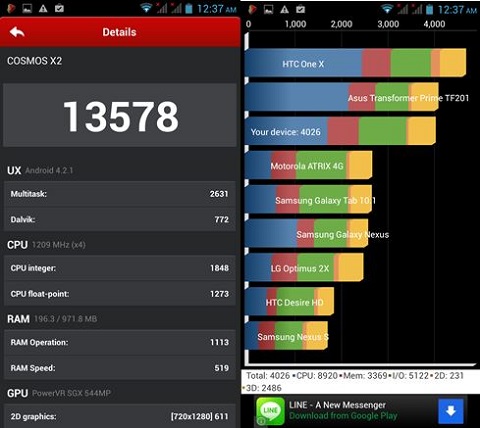 AnTuTu scored it 13578. Meanwhile, it scored 4026 on Quadrant Standard. On the GPU side, it got a respectable 45.5fps on NenaMark 2 benchmark. 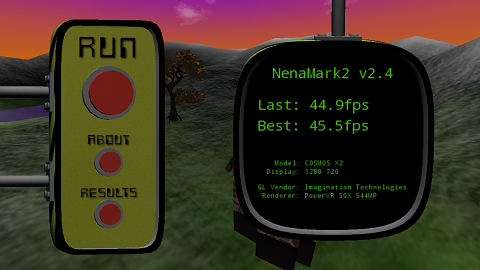 The Cosmos X2 runs on an almost stock version of Android 4.2.1 right off the bat. Thus, it’ll be a familiar ride for those who’ve used an Android handset before. However, if you look close enough, you’ll find out that the X2 is equipped with “Smart Stay” which works exactly like the one found on the Samsung Galaxy S3. 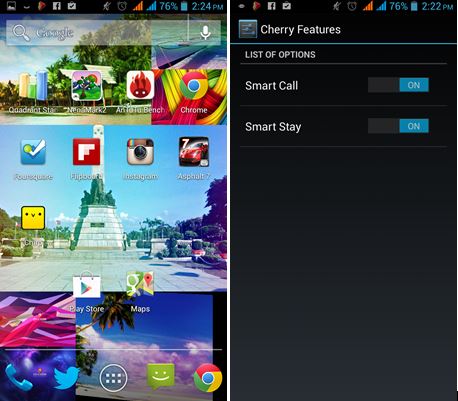 In addition to Samsung-inspired enhancements, Cherry Mobile has also added a few of their in-house apps like the Cherry Play (their own app store), “e-Warranty” and Software Update which makes it easier for users to update the firmware via OTA.

Third-party app compatibility was never a concern during our time with the X2. However, we encountered some “Force Closes” along the way, particularly during check-ins on location-based apps like Foursquare. After doing some research, we were able to zero in on the culprit behind it; the com.google.android.maps.jar was missing. 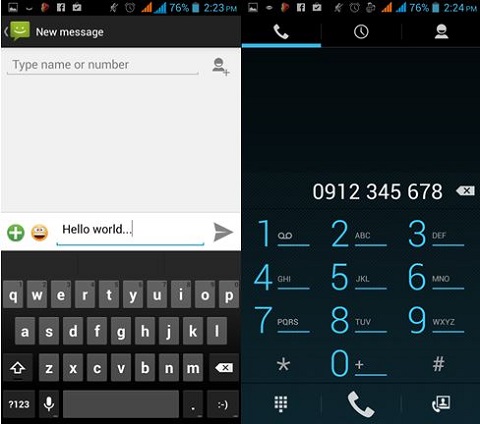 Ironing out this small issue should be fairly easy to do, provided that you’re well-versed with APIs and SDKs. However, I think it’s fair to say that CM should’ve been keener in checking the X2’s library else these kind of things can and will happen. In any case, let’s hope that they release an update to fix this.

After seeing the output of its two other siblings (Cosmos Z and (Cosmos S) we pretty much had an idea on what to expect from the X2’s rear camera.

Being equipped with the same 18MP BSI sensor, the imaging performance we got was almost identical to the Z and the S. Sadly, we also noticed the same inconsistency in image quality that we were keen to point out on the Cosmos S review. That said, depending on the lighting condition you’re shooting in, you’re either going to get a relatively crisp shot (well-lit scenario) or a really crappy one (dim conditions).

In addition to taking pictures, the 18MP snapper at the back is also capable of shooting 1080p videos which is acceptable in most occasions. It’s not going to replace your camcorder anytime soon, but the quality is decent enough to meet most users’ basic video recording needs.

Another thing that’s rather surprising about the Cosmos X2 is how well its battery pack held up during our time with it. We were able to get through a day’s worth of moderate use while still having a few ounces of power left for some music listening to last the entire journey back home. 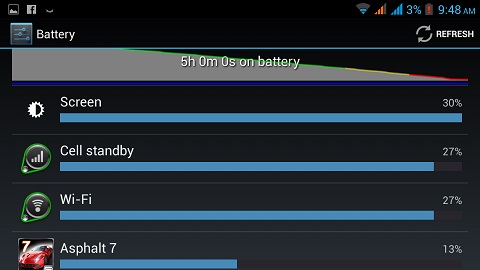 The screenshot above is the battery life we got on a single full charge while watching HD movies on the X2 with the brightness and volume set to 50% and data connectivity left on. Meanwhile, the one below shows the output we got while playing Asphalt 7 while leaving the Wi-Fi on and a bunch of other social media apps running on the background. 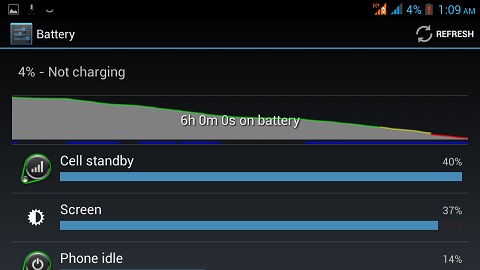 After spending an ample amount of time with the Cosmos X2, we can definitively say that there’s more to this fellow than just looks. It’s a great all-rounder that can pretty much handle most of your smartphone needs, plus it’s got a very respectable display that is certainly a treat to look at.

Although we’ve pointed out some minor drawbacks on the X2, we feel that those aren’t gonna be enough to put down this decent midrange Android smartphone. That said, the only question now is which one of the Cosmos quartet is the right fit for you?

What we did not like:
* Cheap pre-bundled earphones
* Location-based apps issues