Google’s 7-inch slate has just started shipping out last week but VillMan has already got their quick hands on it and is already offering the tablet on a slightly higher price.

When Google announced their flagship device at this year’s Google I/O, theyâ€™re clearly aiming for the budget-conscious market by attaching a $199.99 price tag on to their 8GB variant of their quad-core tablet. In our recent post, weâ€™ve mentioned that of the two variant, only the 16GB, which costs $249.99, will be available locally which should worth around Php15k here. 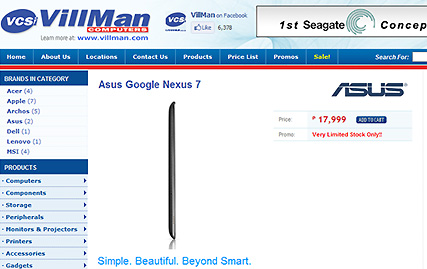 It looks like local PC retailer Villman has gotten some early units directly shipped from the US. Theyâ€™re offering the Google Nexus 7 for Php17,999 (said to be only available in very limited stocks).

Take note that these units are parallel imports which means they did not come from the official Asus distribution chain (read: grey units) which explains the very steep price. Villman also did this with the Asus Pad TF300 which we reported last month.

Editor’s Note: We call this the InfoMaxx economy. Once the actual units are distributed by Asus Phils, the price will eventually normalize. We remember the time when gray market prices of the iPhone 4 reached Php92,000 in local stores. – Yuga